In deterministic and time-sensitive networking, it is important to bound delays of network elements in the worst case. Network calculus is often used to formally prove such delay bounds, based on arrival and service curves characterizations. In this letter, we provide a delay bound for a FIFO system with rate-latency service curve. Our delay bound improves on the network calculus one by exploiting information on the transmission rate. We prove that our bound is tight. 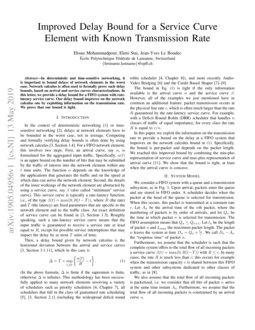 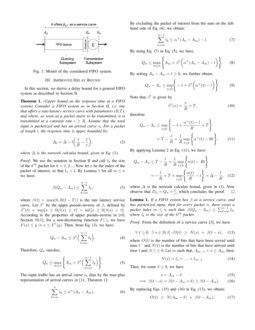 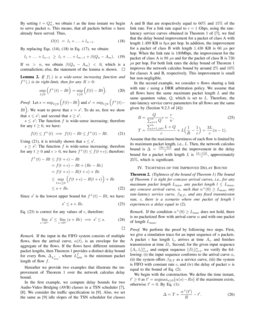 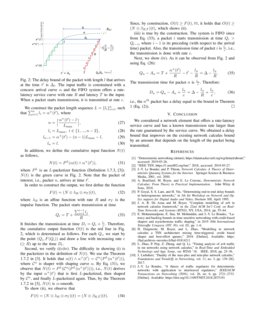 In the context of deterministic networking [1] or time-sensitive networking [2], delays at network elements have to be bounded in the worst case, not in average. Computing and formally verifying delay bounds is often done by using network calculus [3, Section 1.4]. For a FIFO network element, this involves two steps. First, an arrival curve, say α, is formulated for the aggregated input traffic. Specifically, α(t) is an upper bound on the number of bits that may be submitted by the traffic of interest into the network element within any t time units. The function α depends on the knowledge of the applications that generates the traffic and on the speed at which data can arrive the network element. Second, the details of the inner workings of the network element are abstracted by using a service curve, say β (also called “minimum” service curve). This service curve is typically a rate-latency function, i.e., of the type β(t)=max(0,R(t−T)), where R (the rate) and T (the latency) are fixed parameters that are specific to the network element and to the traffic class. An exact definition of service curve can be found in [3, Section 1.3]. Roughly speaking, such a rate-latency service curve means that the input traffic is guaranteed to receive a service rate at least equal to R, except for possible service interruptions that may impact the delay by at most T units of time.

Then, a delay bound given by network calculus is the horizontal deviation between the arrival and service curves [3, Section 3.1.11], which in this case is

(In the above formula, Δ is finite if the supremum is finite, otherwise Δ is infinite). This methodology has been successfully applied to many network elements involving a variety of schedulers such as priority schedulers [4, Chapter 7], all schedulers that fall in the class of guaranteed rate scheduling [5], [3, Section 2.1] (including the widespread deficit round robin scheduler [4, Chapter 8]), and more recently Audio-Video Bridging [6] and the Credit Based Shaper [7, 8, 9].

The bound in Eq. (1) is tight if the only information available is the arrival curve α and the service curve β. However, all of the examples we just mentioned have in common an additional feature: packet transmission occurs at the physical line rate c, which is often much larger than the rate R guaranteed by the rate-latency service curve. For example, with a Deficit Round Robin (DRR) scheduler that handles n classes of traffic of equal importance, for every class the rate R is equal to c/n.

In this paper, we exploit the information on the transmission rate to provide a bound on the delay at a FIFO system that improves on the network calculus bound in (1). Specifically, the bound is per-packet and depends on the packet length. We reached this improved bound by combining the min-plus representation of service curve and max-plus representation of arrival curve [11]. We show that the bound is tight, at least when the arrival curve is concave.

We consider a FIFO system with a queue and a transmission subsystem, as in Fig. 1. Upon arrival, packets enter the queue and are stored in FIFO order. A scheduler decides when the packet at the head of the queue is selected for transmission. When this occurs, this packet is transmitted at a constant rate c. Let An be the arrival time of the nth packet, where the numbering of packets is by order of arrivals, and let Qn be the time at which packet n is selected for transmission. The FIFO assumption means that Qn≤Qn+1. Let ln be the length of packet n and Lmax the maximum packet length. The packet n leaves the system at time Dn=Qn+lnc. We call Dn−An the “response time” of packet n.

Furthermore, we assume that the scheduler is such that the complete system offers to the total flow of all incoming packets a service curve β(t)=max(0,R(t−T)) with R≤c. In many cases, the rate R is much less than c; this occurs for example when the transmission capacity c is shared between this FIFO system and other subsystems dedicated to other classes of traffic, as in [8].

In this section, we derive a delay bound for a general FIFO system as described in Section II.

(Upper bound on the response time at a FIFO system) Consider a FIFO system as in Section II, i.e. one that offers a rate-latency service curve with parameters (R,T), and where, as soon as a packet starts to be transmitted, it is transmitted at a constant rate c≥R. Assume that the total input is packetized and has an arrival curve α. For a packet of length l, the response time is upper bounded by:

where Δ is the network calculus bound, given in Eq. (1).

We use the notation in Section II and call lk the size of the kth packet for k=1,2.... Now let n be the index of the packet of interest, so that ln=l. By Lemma 1 for all m≤n we have:

The input traffic has an arrival curve α, thus by the max-plus representation of arrival curves in [11, Theorem 1]:

By excluding the packet of interest from the sum on the left-hand side of Eq. (6), we obtain:

By setting An−Am=t≥0, we further obtain,

Note that β↑ is given by

where Δ is the network calculus bound, given in (1). Now observe that Dn=Qn+lc, which concludes the proof. ∎

If a FIFO system has β as a service curve, and has packetized input, then for every packet n, there exists a packet index m≤n such that, β(Qn−Am)≤∑n−1k=mlk, where lk is the size of the kth packet.

From the definition of a service curve [3], we have

By setting t=Q+n, we obtain t as the time instant we begin to serve packet n. This means, that all packets before n have already been served. Thus,

If m>n, we obtain β(Qn−Am)<0, which is a contradiction; else, the statement of the lemma is shown. ∎

s≤s′: The function f is wide-sense increasing; therefore for any t≥0, we have:

Since s′ is the lowest upper bound for f+(t)−Rt, we have:

If the input in the FIFO system consists of multiple flows, then the arrival curve, α(t), is an envelope for the aggregate of the flows. If the flows have different minimum packet lengths, then Theorem 1 provides a distinct delay bound for every flow, ΔLfmin, where Lfmin is the minimum packet length of flow f.

Hereafter we provide two examples that illustrate the improvement of Theorem 1 over the network calculus delay bound.

In the first example, we compute delay bounds for two Audio-Video Bridging (AVB) classes in a TSN scheduler [7, 8]. We consider the traffic specification in [9]. Also, we set the same as [9] idle slopes of the TSN scheduler for classes A and B that are respectively equal to 60% and 15% of the link rate. For a link rate equal to c=1 Gbps, using the rate-latency service curves obtained in Theorem 1 of [7], we find that the delay bound improvement for a packet of class A with length 1.499 KB is 8μs per hop. In addition, the improvement for a packet of class B with length 1.438 KB is 66 μs per hop. When the link rate is 100Mbps, the improvement for the packet of class A is 98 μs and for the packet of class B is 736 μs per hop. For both link rates the delay bound of Theorem 1 improves the network calculus bound by around 2% and 10% for classes A and B, respectively. This improvement is small but non-negligible.

In the second example, we consider n flows sharing a link with rate c using a DRR arbitration policy. We assume that all flows have the same maximum packet length L and the same quantum value, Q, which is set to L. Therefore, the rate-latency service curve parameters for all flows are the same given by (Section 9.2.3 of [4]):

Assume that the maximum burstiness of each flow is limited by its maximum packet length, i.e., L. Then, the network calculus bound is Δ=(4n−3)Lc and the improvement in the delay bound for a packet with length L is (n−1)Lc, approximately 25%, which is significant.

If the condition α+(0)≥Lmax does not hold, there is no packetized flow with arrival curve α and with one packet of length Lmax.

We perform the proof by following two steps. First, we give a simulation trace for an input sequence of n packets. A packet i has length li, arrives at time Ai, and finishes transmission at time Di. Second, for the given input sequence {Ai,li}ni=1 and output sequence {Di}ni=1, we verify the following: (i) the input sequence conforms to the arrival curve α, (ii) the system offers βR,T as a service curve, (iii) the system is FIFO with constant rate c, and (iv) the delay of packet n is equal to the bound of Eq. (2).

We construct the packet length sequence L={li}ni=1, such that ∑ni=1li=α+(t′), where

In addition, we define the cumulative input function N(t) as follows,

In order to construct the output, we first define the function

where λR is an affine function with rate R and σT is the impulse function. The packet starts transmission at time

It finishes the transmission at time Di=Qi+lic. Therefore, the cumulative output function O(t) is the red line in Fig. 2, which is determined as follows. For each Qi, we start by the point (Qi,F(Qi)) and draw a line with increasing rate c (≥R) up to the time Di.

To show (ii), we observe that

(iii) is true by the construction. The system is FIFO since from Eq. (33), a packet i starts transmission at time Qi>Qi−1, where i−1 is its preceding (with respect to the arrival time) packet. Also, the transmission time of packet i is lic, i.e., the transmission is done with rate c.

The transmission time for packet n is lnc. Therefore:

We considered a network element that offers a rate-latency service curve and has a known transmission rate larger than the rate guaranteed by the service curve. We obtained a delay bound that improves on the existing network calculus bound by an amount that depends on the length of the packet being transmitted.