In Time Sensitive Networking (TSN), it is important to formally prove per flow latency and backlog bounds. To this end, recent works apply network calculus and obtain latency bounds from service curves. The latency component of such service curves is directly derived from upper bounds on the values of the credit counters used by the Credit-Based Shaper (CBS), an essential building block of TSN. In this paper, we derive and formally prove credit upper bounds for CBS, which improve on existing bounds. 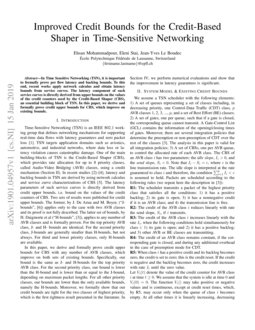 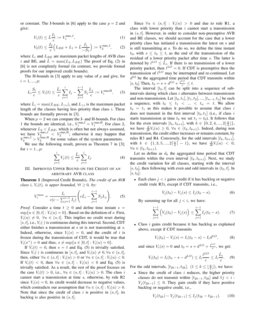 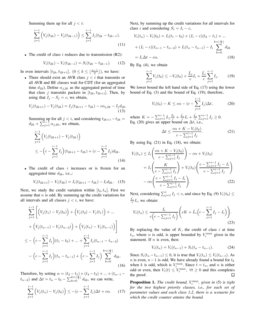 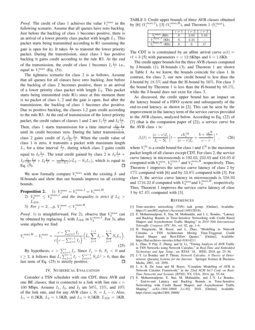 Time-Sensitive Networking (TSN) is an IEEE 802.1 working group that defines networking mechanisms for supporting real-time data flows with latency guarantees and zero packet loss [1]. TSN targets applications in avionics, automotive, industrial networks, etc., where data loss or latency violation causes catastrophic damage. One of the main building-blocks of TSN is the Credit-Based Shaper (CBS), which provides rate allocation for a number of priority classes, called Audio-Video Bridging (AVB) classes, using a credit mechanism (Section II). In recent studies [2, 3, 4], latency and backlog bounds in TSN are derived by using network calculus and service curve characterizations of CBS [5]. The latency parameters of such service curves is directly derived from credit upper bounds, i.e. bounds on the values of the credit counters of CBS. Two sets of results were published for credit upper bounds. The former, by J. De Azua and M. Boyer, (“J-bounds”, [6]) applies only to the case with two AVB classes and its proof is not fully described. The latter set of bounds, by H. Daigmorte et al (“H-bounds”, [3]), applies to any number of AVB classes and is formally proven. For the top priority AVB class, J- and H-bounds are identical. For the second priority class, J-bounds are generally smaller than H-bounds, but not always. For third and lower priority classes, only H-bounds are available.

In this paper, we derive and formally prove credit upper bounds for CBS with any number of AVB classes, which improve on both sets of existing bounds. Specifically, our bound is the same as J- and H-bounds for the top priority AVB class. For the second priority class, our bound is lower than the H-bound and is lower than or equal to the J-bound, depending on maximum packet lengths. For all other priority classes, our bounds are lower than the only available bounds, namely the H-bounds. Moreover, we formally show that our credit bounds are tight for the two classes of highest priority, which is the first tightness result presented in the literature. In Section IV, we perform numerical evaluations and show that the improvement in latency guarantees is significant.

We assume a TSN scheduler with the following elements: 1) A set of queues representing a set of classes including, in decreasing priority, one Control-Data Traffic (CDT) class, p AVB classes 1, 2, 3, …, p, and a set of Best Effort (BE) classes; 2) A set of gates, one per queue, such that if a gate is closed, the corresponding queue cannot transmit. A Gate-Control List (GCL) contains the information of the opening/closing times of gates. Moreover, there are several integration policies that determine the preemption or non-preemption of CDT over the rest of the classes [3]. The analysis in this paper is valid for all integration policies; 3) A set of CBSs, one per AVB queue, to control the allocated rate of each AVB class. The CBS of an AVB class i has two parameters: the idle slope, Ii>0, and the send slope, Si<0. Note that Ii−Si=c, where c is the line transmission rate. The idle slope is interpreted as the rate guaranteed to class i and therefore, the condition ∑pi=1Ii<c is assumed to hold. Packets are scheduled according to the following rules (we repeat here the description in [3]): R1: If the transmission line is free, the scheduler transmits a packet of the highest priority class that satisfies all the conditions: 1) it has a positive backlog; 2) its gate is open; 3) it has a nonnegative credit if it is an AVB class. R2: The credit of the AVB class i reduces linearly with rate the send slope, Si, if i transmits. R3: The credit of the AVB class i increases linearly with rate Ii, when the following conditions hold simultaneously for class i: 1) its gate is open; 2) it has a positive backlog; and 3) other AVB or BE classes are transmitting. R4: The credit of an AVB class remains constant, if the corresponding gate is closed, and during any additional overhead in the case of preemption mode for CDT. R5: When class i has a positive credit and its backlog becomes zero, the credit is set to zero; this is the credit reset. If the credit is negative and the backlog becomes zero, the credit increases with rate Ii until the zero value. Let Vi(t) denote the value of the credit counter for AVB class i at time t≥0. We assume that the system is idle at time 0 and Vi(0)=0. The function Vi() may take positive or negative values and is continuous, except at credit reset times, which, by R5, may occur only when the queue of class i becomes empty. At all other times it is linearly increasing, decreasing or constant. The J-bounds in [6] apply to the case p=2, as:

where Li and LBE are maximum packet lengths of AVB class i and BE, and ¯L=max(L2,LBE) The proof of Eq. (2) in [6] is not completely formal (in contrast, we provide formal proofs for our improved credit bounds).

where ¯Li=max(LBE,L>i), and L>i is the maximum packet length of the classes having less priority than class i. These bounds are formally proven in [3].

When p=2 we can compare the J- and H-bounds. For class 1 the bounds are identical, i.e., Vmax,\mathrm{J}1=Vmax,\mathrm{H}1. For class 2, whenever L2<LBE, which is often but not always assumed, we have Vmax,J2<Vmax,H2; otherwise it may happen that Vmax,J2>Vmax,H2 for some values of the system parameters.

. Indeed, during non transmission, the credit either increases or remains constant, by rules R3 and R4. Conversely, for the odd intervals

Let us define as dk the aggregated time period that the credit is frozen within the even interval [tk,tk+1]. Next, we study the credit variation for all classes, starting with the interval [s,t0], then following with even and odd intervals in (t0,t]. In [s,t0]:

Next, by summing up the credit variations for all intervals for class i and considering Si=Ii−c,

By replacing the value of K, the credit of class i at time tn, where n is odd, is upper bounded by Vmaxi given in the statement. If n is even, then:

The credit bound, Vmaxi, given in (5) is tight for the two highest priority classes, i.e., for each set of parameter values and each class 1,2, there is a scenario for which the credit counter attains the bound.

The credit of class 1 achieves the value Vmax1 in the following scenario. Assume that all queues have zero backlog. Just before the backlog of class 1 becomes positive, there is an arrival of a lower priority class packet with length ¯L1. This packet starts being transmitted according to R1 (assuming the gate is open for it). It takes ¯L1c to transmit the lower priority packet. During the transmission, since class 1 has positive backlog it gains credit according to the rule R3. At the end of the transmission, the credit of class 1 becomes I1¯L1c i.e., equal to Vmax1 (Eq. (5)).

The tightness scenario for class 2 is as follows. Assume that all queues for all classes have zero backlog. Just before the backlog of class 2 becomes positive, there is an arrival of a lower priority class packet with length ¯L2

. This packet starts being transmitted (rule R1) since at this moment there is no packet of class 1, 2 and the gate is open. Just after the transmission, the backlog of class 1 becomes also positive. Due to positive backlog, the classes 1,2 gain credit according to the rule R3. At the end of transmission of the lower priority packet, the credit values of classes 1 and 2 are

We now formally compare Vmaxi with the existing J- and H-bounds and show that our bounds improve on all existing bounds.

1) is straightforward. For 2), observe that Vmax2 can be obtained by replacing ¯L with LBE in Vmax,J2. For 3), after some algebra we find:

The credit upper bounds for the three AVB classes computed by J-bounds (1), H-bounds (3), and Theorem 1 are shown in Table I. As we know, the bounds coincide for class 1. In contrast, for class 2, our new credit bound is less than the J-bound by 18.5%111As aforementioned, J-bounds exist only for the case p=2. Thus, in the computation of the J-bound, class 3 is treated as a BE class. and than the H-bound by 56%. For class 3 the bound by Theorem 1 is less than the H-bound by 68.1%, while the J-bound does not exist for class 3.

As discussed, the credit upper bound has an impact on the latency bound of a FIFO system and subsequently of the end-to-end latency, as shown in [2]. This can be seen by the improvement in the latency term of the service curves provided to the AVB classes, analyzed below. According to Eq. (22) of [7] (that is the companion paper of [2]), a service curve for the AVB class i is: