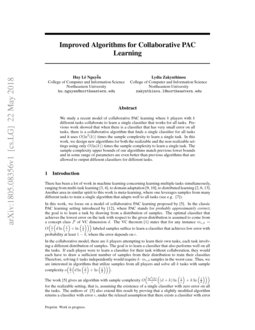 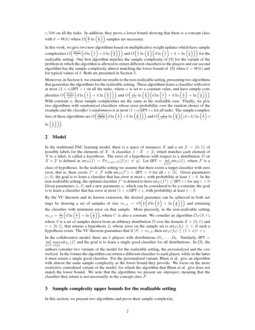 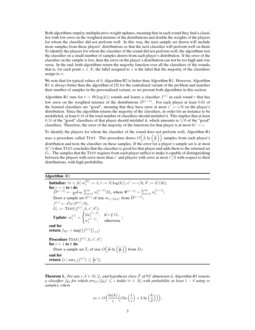 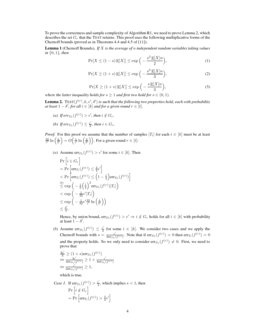 There has been a lot of work in machine learning concerning learning multiple tasks simultaneously, ranging from multi-task learning

[3, 4], to domain adaptation [10, 11], to distributed learning [2, 7, 14]. Another area in similar spirit to this work is meta-learning, where one leverages samples from many different tasks to train a single algorithm that adapts well to all tasks (see e.g. [8]).

In this work, we focus on a model of collaborative PAC learning, proposed by [5]. In the classic PAC learning setting introduced by [13], where PAC stands for probably approximately correct, the goal is to learn a task by drawing from a distribution of samples. The optimal classifier that achieves the lowest error on the task with respect to the given distribution is assumed to come from a concept class F of VC dimension d. The VC theorem [1] states that for any instance mϵ,δ=O(1ϵ(dln(1ϵ)+ln(1δ)))

1−δ, where the error depends on ϵ.

In the collaborative model, there are k players attempting to learn their own tasks, each task involving a different distribution of samples. The goal is to learn a single classifier that also performs well on all the tasks. One example from [5], which motivates this problem, is having k hospitals with different patient demographics which want to predict the overall occurrence of a disease. In this case, it would be more fitting as well as cost efficient to develop and distribute a single classifier to all the hospitals. In addition, the requirement for a single classifier is imperative in settings where there are fairness concerns. For example, consider the case that the goal is to find a classifier that predicts loan defaults for a bank by gathering information from bank stores located in neighborhoods with diverse socioeconomic characteristics. In this setting, the samples provided by each bank store come from different distributions while it is desired to guarantee low error rates for all the neighborhoods. Again, in this setting, the bank should employ a single classifier among all the neighborhoods.

If each player were to learn a classifier for their task without collaboration, they would each have to draw a sufficient number of samples from their distribution to train their classifier. Therefore, solving k tasks independently would require k⋅mϵ,δ samples in the worst case. Thus, we are interested in algorithms that utilize samples from all players and solve all k tasks with sample complexity .

Blum et al. [5] give an algorithm with sample complexity O(ln2(k)ϵ((d+k)ln(1ϵ)+kln(1δ))) for the realizable setting, that is, assuming the existence of a single classifier with zero error on all the tasks. They also extend this result by proving that a slightly modified algorithm returns a classifier with error ϵ, under the relaxed assumption that there exists a classifier with error ϵ/100 on all the tasks. In addition, they prove a lower bound showing that there is a concept class with d=Θ(k) where Ω(kϵln(kδ)) samples are necessary.

In this work, we give two new algorithms based on multiplicative weight updates which have sample complexities O(ln(k)ϵ(dln(1ϵ)+kln(kδ))) and O(1ϵln(kδ)(dln(1ϵ)+k+ln(1δ))) for the realizable setting. Our first algorithm matches the sample complexity of [5] for the variant of the problem in which the algorithm is allowed to return different classifiers to the players and our second algorithm has the sample complexity almost matching the lower bound of  [5] when d=Θ(k) and for typical values of δ. Both are presented in Section 3. Independently of our work, [6] use the multiplicative weight update approach and achieve the same bounds as we do in that section.

By the VC theorem and its known extension, the desired guarantee can be achieved in both settings by drawing a set of samples of size mϵ,δ=O(1ϵ(dln(1ϵ)+ln(1δ))) and returning the classifier with minimum error on that sample. More precisely, in the non-realizable setting, mϵ,δ=Cϵα(dln(1ϵ)+ln(1δ)), where C is also a constant. We consider an algorithm OF(S), where S is a set of samples drawn from an arbitrary distribution D over the domain X×{0,1}, that returns a hypothesis f0 whose error on the sample set satisfies errS(f0)≤inff∈FerrS(f)+ε for any ε>0, if such a hypothesis exists. The VC theorem guarantees that if |S|=mϵ,δ, then errD(f0)≤(1+α)errS(f0)+ϵ.

In the collaborative model, there are k players with distributions D1,…,Dk. Similarly, OPT=inff∈Fmaxi∈[k]errDi(f) and the goal is to learn a single good classifier for all distributions. In [5], the authors consider two variants of the model for the realizable setting, the personalized and the centralized. In the former the algorithm can return a different classifier to each player, while in the latter it must return a single good classifier. For the personalized variant, Blum et al. give an algorithm with almost the same sample complexity as the lower bound they provide. We focus on the more restrictive centralized variant of the model, for which the algorithm that Blum et al. give does not match the lower bound. We note that the algorithms we present are improper, meaning that the classifier they return is not necessarily in the concept class F.

In this section, we present two algorithms and prove their sample complexity.

We note that for typical values of δ, Algorithm R2 is better than Algorithm R1. However, Algorithm R1 is always better than the algorithm of [5] for the centralized variant of the problem and matches their number of samples in the personalized variant, so we present both algorithms in this section. In the algorithms of [5], the players are divided into classes based on the number of rounds for which that player’s task is not solved with low error. The number of classes could be as large as the number of rounds, which is Θ(log(k)), and their algorithm uses roughly mϵ,δ samples from each class. On the other hand, Algorithm R1 uses only mϵ,δ samples across all classes and saves a factor of Θ(log(k)) in the sample complexity. This requires analyzing the change in all classes together as opposed to class by class.

Algorithm R1 runs for t=Θ(log(k)) rounds and learns a classifier f(r) in each round r that has low error on the weighted mixture of the distributions ~D(r−1). For each player at least 0.6t of the learned classifiers are “good”, meaning that they have error at most ϵ′=ϵ/6 on the player’s distribution. Since the algorithm returns the majority of the classifiers, in order for an instance to be mislabeled, at least 0.5t of the total number of classifiers should mislabel it. This implies that at least 0.1t of the “good” classifiers of that player should mislabel it, which amounts to 1/6 of the “good” classifiers. Therefore, the error of the majority of the functions for that player is at most 6ϵ′=ϵ.

To identify the players for whom the classifier of the round does not perform well, Algorithm R1 uses a procedure called Test. This procedure draws O(1ϵ′ln(kδ′)) samples from each player’s distribution and tests the classifier on these samples. If the error for a player’s sample set is at most 3ϵ′/4 then Test concludes that the classifier is good for that player and adds them to the returned set Gr. The samples that the Test requires from each player suffice to make it capable of distinguishing between the players with error more than ϵ′ and players with error at most ϵ′/2 with respect to their distributions, with high probability.

For any ϵ,δ∈(0,1), and hypothesis class F of VC dimension d, Algorithm R1 returns a classifier fR1 with errDi(fR1)≤ϵ ∀i∈[k] with probability at least 1−δ using m samples, where

To prove the correctness and sample complexity of Algorithm R1, we need to prove Lemma 1.2, which describes the set Gr that the Test returns. This proof uses the following multiplicative forms of the Chernoff bounds (proved as in Theorems 4.4 and 4.5 of [12]).

If X is the average of n

where the latter inequality holds for s≥1 and the first two hold for s∈(0,1).

\textscTest(f(r),k,ϵ′,δ′) is such that the following two properties hold, each with probability at least 1−δ′, for all i∈[k] and for a given round r∈[t].

For this proof we assume that the number of samples |Ti| for each i∈[k] must be at least . For a given round r∈[t]:

Having proven Lemma 1.2, we can now prove Theorem 1.

First, we prove that Algorithm R1 indeed learns a good classifier, meaning that for every player i∈[k] the returned classifier fR1 has error errDi(fR1)≤ϵ with probability at least 1−δ.

Let us now prove the claim.

Recall that Φ(r)=∑ki=1w(r)i is the potential function in round r. By linearity of expectation, the following holds for the error on the mixture of distributions:

Since only the weights of players i∉Gr are doubled, it holds that for a given round r

Therefore with probability at least 1−2tδ′=1−2δ3, the inequality holds for all rounds, by union bound. By induction:

Also, for every i∈[k] it holds that w(t)i=2e(t)i, as each weight is only doubled every time i does not pass the Test. Since the potential function is the sum of all weights, the following inequality is true.

As for the total number of samples, it is the sum of Test’s samples and the mϵ′/16,δ′ samples for each round. Since Test is called t=5⌈log(k)⌉ times and each time requests O(1ϵ′ln(kδ′)) samples from each of the k players, the total number of samples that it requests is O(log(k)kϵ′ln(kδ′)). Substituting ϵ′=ϵ/6 and δ′=δ/(3t)=δ/(15⌈log(k)⌉), this yields

Hence, the overall bound is:

Algorithm R1 is the natural boosting alternative to the algorithm of [5] for the centralized variant of the model. Although it is discussed in [5] and mentioned to have the same sample complexity as their algorithm, it turns out that it is more efficient. Its sample complexity is slightly better (or the same, depending on the parameter regime) compared to the one of the algorithm for the personalized setting presented in [5], which is .

However, in the setting of the lower bound in [5] where k=Θ(d), there is a gap of log(k) multiplicatively between the sample complexity of Algorithm R1 and the lower bound. This difference stems from the fact that in every round, the algorithm uses roughly Θ(k) samples to find a classifier but roughly Θ(klog(k)) samples to test the classifier for k tasks. Motivated by this discrepancy, we develop Algorithm R2, which is similar to Algorithm R1 but uses fewer samples to test the performance of each classifier on the players’ distributions. To achieve high success probability, Algorithm R2 uses a higher number of rounds.