Experimenting with a dataset of approximately 1.6M user comments from a Greek news sports portal, we explore how a state of the art RNN-based moderation method can be improved by adding user embeddings, user type embeddings, user biases, or user type biases. We observe improvements in all cases, with user embeddings leading to the biggest performance gains. 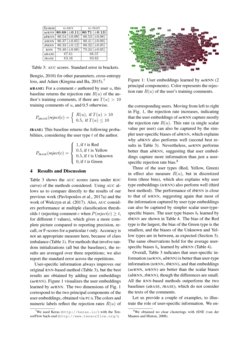 News portals often allow their readers to comment on articles, in order to get feedback, engage their readers, and build customer loyalty. User comments, however, can also be abusive (e.g., bullying, profanity, hate speech), damaging the reputation of news portals, making them liable to fines (e.g., when hosting comments encouraging illegal actions), and putting off readers. Large news portals often employ moderators, who are frequently overwhelmed by the volume and abusiveness of comments.111See, for example, https://goo.gl/WTQyio. Readers are disappointed when non-abusive comments do not appear quickly online because of moderation delays. Smaller news portals may be unable to employ moderators, and some are forced to shut down their comments.222See https://goo.gl/2eKdeE.

In previous work (Pavlopoulos et al., 2017a), we introduced a new dataset of approx. 1.6M manually moderated user comments from a Greek sports news portal, called Gazzetta, which we made publicly available.333The portal is http://www.gazzetta.gr/. Instructions to download the dataset will become available at http://nlp.cs.aueb.gr/software.html. Experimenting on that dataset and the datasets of Wulczyn et al. Wulczyn et al. (2017)

, which contain moderated English Wikipedia comments, we showed that a method based on a Recurrent Neural Network (

rnn) outperforms detox (Wulczyn et al., 2017), the previous state of the art in automatic user content moderation.444Two of the co-authors of Wulczyn et al. Wulczyn et al. (2017) are with Jigsaw, who recently announced Perspective, a system to detect ‘toxic’ comments. Perspective is not the same as detox (personal communication), but we were unable to obtain scientific articles describing it. Our previous work, however, considered only the texts of the comments, ignoring user-specific information (e.g., number of previously accepted or rejected comments of each user). Here we add user embeddings or user type embeddings to our rnn

We first discuss the dataset we used, to help acquaint the reader with the problem. The dataset contains Greek comments from Gazzetta (Pavlopoulos et al., 2017a). There are approximately 1.45M training comments (covering Jan. 1, 2015 to Oct. 6, 2016); we call them g-train (Table 1). An additional set of 60,900 comments (Oct. 7 to Nov. 11, 2016) was split to development set (g-dev, 29,700 comments) and test set (g-test, 29,700).555The remaining 1,500 comments are not used here. Smaller subsets of g-train and g-test are also available (Pavlopoulos et al., 2017a), but are not used in this paper. The Wikipedia comment datasets of Wulczyn et al. Wulczyn et al. (2017) cannot be used here, because they do not provide user ids. Each comment has a gold label (‘accept’, ‘reject’). The user id of the author of each comment is also available, but user ids were not used in our previous work.

Table 2 shows the number of users per type.

has been computed, a logistic regression (

c should be rejected:

Wp∈R1×m, b∈R.666In our previous work (Pavlopoulos et al., 2017a), we also considered a variant of rnn, called a-rnn, with an attention mechanism. We do not consider a-rnn here to save space.

uernn: This is the rnn-based method with user embeddings added. Each user u of the training set with T(u)>10 is mapped to a user-specific embedding vu∈Rd. Users with T(u)≤10 are mapped to a single ‘unknown’ user embedding. The lr layer is modified as follows; vu is the embedding of the author of c; and Wv∈R1×d.

ubrnn: This is the rnn-based method with user biases added. Each user u of the training set with T(u)>10 is mapped to a user-specific bias bu∈R. Users with T(u)≤10 are mapped to a single ‘unknown’ user bias. The lr layer is modified as follows, where bu is the bias of the author of c.

We expected ubrnn to learn higher (or lower) bu biases for users whose posts were frequently rejected (accepted) in the training data, biasing the system towards rejecting (accepting) their posts.

tbrnn: This is the rnn-based method with user type biases. Each user type t is mapped to a user type bias bt∈R. The lr layer is modified as follows; bt is the bias of the type of the author.

In all methods above, we use 300-dimensional word embeddings, user and user type embeddings with d=300 dimensions, and m=128 hidden units in the gru cells, as in our previous experiments (Pavlopoulos et al., 2017a)

, where we tuned all hyper-parameters on 2% held-out training comments. Early stopping evaluates on the same held-out subset. User and user type embeddings are randomly initialized and updated by backpropagation. Word embeddings are initialized to the

word2vec embeddings of our previous work (Pavlopoulos et al., 2017a), which were pretrained on 5.2M Gazzetta comments. Out of vocabulary words, meaning words not encountered or encountered only once in the training set and/or words with no initial embeddings, are mapped (during both training and testing) to a single randomly initialized word embedding, updated by backpropagation. We use Glorot initialization (Glorot and Bengio, 2010) for other parameters, cross-entropy loss, and Adam (Kingma and Ba, 2015).777

) with the TensorFlow back-end (

tbase: This baseline returns the following probabilities, considering the user type t of the author.

values), which gives a more complete picture compared to reporting precision, recall, or F-scores for a particular

t only. Accuracy is not an appropriate measure here, because of class imbalance (Table 1). For methods that involve random initializations (all but the baselines), the results are averaged over three repetitions; we also report the standard error across the repetitions.

Three of the user types (Red, Yellow, Green) in effect also measure R(u), but in discretized form (three bins), which also explains why user type embeddings (ternn) also perform well (third best method). The performance of tbrnn is close to that of ternn, suggesting again that most of the information captured by user type embeddings can also be captured by simpler scalar user-type-specific biases. The user type biases bt learned by tbrnn are shown in Table 4. The bias of the Red type is the largest, the bias of the Green type is the smallest, and the biases of the Unknown and Yellow types are in between, as expected (Section 3). The same observations hold for the average user-specific biases bu learned by ubrnn (Table 4).

Let us provide a couple of examples, to illustrate the role of user-specific information. We encountered a comment saying just “Ooooh, down to Pireaus…” (translated from Greek), which the moderator had rejected, because it is the beginning of an abusive slogan. The rejection probability of rnn was only 0.34, presumably because there are no clearly abusive expressions in the comment, but the rejection probability of uernn was 0.72, because the author had a very high rejection rate. On the other hand, another comment said “Indeed, I know nothing about the filth of Greek soccer.” (translated, apparently not a sarcastic comment). The original rnn method marginally rejected the comment (rejection probability 0.57), presumably because of the ‘filth’ (comments talking about the filth of some sport or championship are often rejected), but uernn gave it a very low rejection probability (0.15), because the author of the comment had a very low rejection rate.

Dadvar et al. Dadvar et al. (2013) detect cyberbullying in YouTube comments, using an svm and features examining the content of each comment (e.g., second person pronouns followed by profane words, common bullying words), but also the profile and history of the author of the comment (e.g., age, frequency of profane words in past posts). Waseem et al. Waseem and Hovy (2016) detect hate speech tweets. Their best method is an lr classifier, with character n-grams and a feature indicating the gender of the author; adding the location of the author did not help.

predict which users will be banned from on-line communities. Their best system uses a Random Forest or

lr classifier, with features examining the average readability and sentiment of each user’s past posts, the past activity of each user (e.g., number of posts daily, proportion of posts that are replies), and the reactions of the community to the past actions of each user (e.g., up-votes, number of posts rejected). Lee et al. Lee et al. (2014) and Napoles et al. Napoles et al. (2017) include similar user-specific features in classifiers intended to detect high quality on-line discussions.

cnn). The feature vector produced by the cnn (representing the content of the tweet) is concatenated with the user embedding of the author, and passed on to an mlp that classifies the tweet as sarcastic or not. This method outperforms a previous state of the art sarcasm detection method (Bamman and Smith, 2015) that relies on an lr classifier with hand-crafted content and user-specific features. We use an rnn instead of a cnn, and we feed the comment and user embeddings to a simpler lr layer (Eq. 2), instead of an mlp. Amir et al. discard unknown users, unlike our experiments, and consider only sarcasm, whereas moderation also involves profanity, hate speech, bullying, threats etc.

User embeddings have also been used in: conversational agents

(Chen et al., 2016); retweet prediction (Zhang et al., 2016); predicting which topics a user is likely to tweet about, the accounts a user may want to follow, and the age, gender, political affiliation of Twitter users (Benton et al., 2016).

also discussed how machine learning can be used in

semi-automatic moderation, by letting moderators focus on ‘difficult’ comments and automatically handling comments that are easier to accept or reject. In more recent work (Pavlopoulos et al., 2017b) we also explored how an attention mechanism can be used to highlight possibly abusive words or phrases when showing ‘difficult’ comments to moderators.

We plan to compare uernn to cnn-based methods that employ user embeddings (Amir et al., 2016), after replacing the lr layer of uernn by an mlp to allow non-linear combinations of comment and user embeddings.

This work was funded by Google’s Digital News Initiative (project ml2p, contract 362826).999See https://digitalnewsinitiative.com/. We are grateful to Gazzetta for the data they provided. We also thank Gazzetta’s moderators for their feedback, insights, and advice.