The widely-used automatic evaluation metrics cannot adequately reflect the fluency of the translations. The n-gram-based metrics, like BLEU, limit the maximum length of matched fragments to n and cannot catch the matched fragments longer than n, so they can only reflect the fluency indirectly. METEOR, which is not limited by n-gram, uses the number of matched chunks but it does not consider the length of each chunk. In this paper, we propose an entropy-based method, which can sufficiently reflect the fluency of translations through the distribution of matched words. This method can easily combine with the widely-used automatic evaluation metrics to improve the evaluation of fluency. Experiments show that the correlations of BLEU and METEOR are improved on sentence level after combining with the entropy-based method on WMT 2010 and WMT 2012. 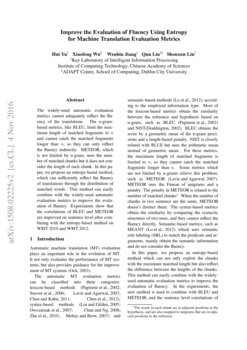 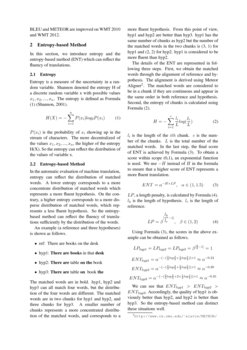 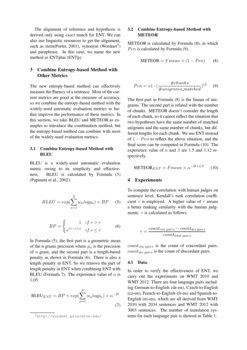 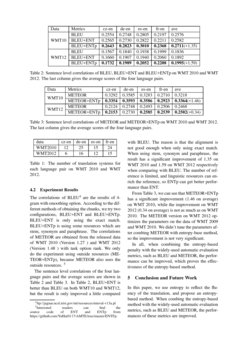 Tangled up in BLEU: Reevaluating the Evaluation of Automatic Machine Translation Evaluation Metrics

Automatic metrics are fundamental for the development and evaluation of ...
Nitika Mathur, et al. ∙

Why We Need New Evaluation Metrics for NLG

Evaluating Pronominal Anaphora in Machine Translation: An Evaluation Measure and a Test Suite

The ongoing neural revolution in machine translation has made it easier ...
Prathyusha Jwalapuram, et al. ∙

Re-speaking is a mechanism for obtaining high quality subtitles for use ...
Krzysztof Wołk, et al. ∙

Automatic machine translation (MT) evaluation plays an important role in the evolution of MT. It not only evaluates the performance of MT systems, but also provides guidance for the improvement of MT systems [Och2003].

The automatic MT evaluation metrics can be classified into three categories: lexicon-based methods

. BLEU obtains the score by a geometric mean of the n-gram precisions and a length-based penalty. NIST is closely related with BLUE but uses the arithmetic mean instead of geometric mean. For these metrics, the maximum length of matched fragments is limited to

n, so they cannot catch the matched fragments longer than n. Some metrics which are not limited by n-grams relieve this problem, such as METEOR [Lavie and Agarwal2007]. METEOR uses the Fmean of unigrams and a penalty. The penalty in METEOR is related to the number of matched chunks111The words in each chunk are in adjacent positions in the hypothesis, and are also mapped to unigrams that are in adjacent positions in the reference.. When the number of chunks in two sentence are the same, METEOR doesn’t distinct them. The syntax-based metrics obtain the similarity by comparing the syntactic structures of two trees, and they cannot reflect the fluency directly. Semantic-based metrics, such as MEANT [Lo et al.2012] which uses semantic role labeling (SRL) to match the predicate and arguments, mainly obtain the semantic information and do not consider the fluency.

In this paper, we propose an entropy-based method which can not only exploit the chunks with the maximum matched length but also reflect the difference between the lengths of the chunks. This method can easily combine with the widely-used automatic evaluation metrics to improve the evaluation of fluency. In the experiments, the new method is used to combine with BLEU and METEOR, and the sentence level correlations of BLEU and METEOR are improved on WMT 2010 and WMT 2012.

In this section, we introduce entropy and the entropy-based method (ENT) which can reflect the fluency of translations.

is the probability of

An example (a reference and three hypotheses) is shown as follows.

The details of the ENT are represented in following three steps. First, we obtain the matched words through the alignment of reference and hypothesis. The alignment is derived using Meteor Aligner222http://www.cs.cmu.edu/~alavie/METEOR/. The matched words are considered to be in a chunk if they are continuous and appear in the same order in both reference and hypothesis. Second, the entropy of chunks is calculated using Formula (2).

li is the length of the ith chunk. c is the number of the chunks. L is the total number of the matched words. In the last step, the final score of ENT is achieved by Formula (3). To obtain a score within scope (0,1), an exponential function is used. We use −H instead of H in the formula to ensure that a higher score of ENT represents a more fluent translation.

Using Formula (3), the scores in the above example can be obtained as follows.

We can see that ENThyp1>ENThyp2>ENThyp3. Accordingly, the quality of hyp1 is obviously better than hyp2, and hyp2 is better than hyp3. So the entropy-based method can distinct these situations well.

The alignment of reference and hypothesis is derived only using exact match for ENT. We can also use linguistic resources to get the alignment, such as stem[Porter2001], synonym (Wordnet333http://wordnet.princeton.edu/) and paraphrase. In this case, we name the new method as ENTplus (ENTp).

3 Combine Entropy-based Method with Other Metrics

BLEU is a widely-used automatic evaluation metric owing to its simplicity and effectiveness. BLEU is calculated by Formula (5) [Papineni et al.2002].

The first part in Formula (8) is the fmean of unigrams. The second part is related with the number of chunks. METEOR doesn’t consider the length of each chunk, so it cannot reflect the situation that two hypotheses have the same number of matched unigrams and the same number of chunks, but different lengths for each chunk. We use ENT instead of 1−Pen to reflect the above situation, and the final score can be computed in Formula (10). The experience value of α and β are 1.5 and 1.12 respectively.

To compute the correlation with human judges on sentence level, Kendall’s rank correlation coefficient τ is employed. A higher value of τ means a better ranking similarity with the human judgments. τ is calculated as follows.

The correlations of BLEU444ftp://jaguar.ncsl.nist.gov/mt/resources/mteval-v13a.pl are the results of 4-gram with smoothing option. According to the different methods of obtaining the chunks, we try two configurations, BLEU+ENT and BLEU+ENTp. BLEU+ENT is only using the exact match. BLEU+ENTp is using some resources which are stem, synonym and paraphrase. The correlations of METEOR are obtained from the released data of WMT 2010 (Version 1.27 ) and WMT 2012 (Version 1.48 ) with task option ‘rank’. We only do the experiment using outside resources (METEOR+ENTp), because METEOR also uses the outside resources. 555Interested readers can find the source code of ENT and ENTp from https://github.com/YuHui0117/AMTE/tree/master/ENTFp.

The sentence level correlations of the four language pairs and the average scores are shown in Table 2 and Table 3. In Table 2, BLEU+ENT is better than BLEU on both WMT10 and WMT12, but the result is only improved a little compared with BLEU. The reason is that the alignment is not good enough when only using exact match. When using stem, synonym and paraphrase, the result has a significant improvement of 1.35 on WMT 2010 and 1.59 on WMT 2012 respectively when comparing with BLEU. The number of reference is limited, and linguistic resources can enrich the reference, so ENTp can get better performance than ENT.

In all, when combining the entropy-based penalty with the widely-used automatic evaluation metrics, such as BLEU and METEOR, the performance can be improved, which proves the effectiveness of the entropy-based method.

In this paper, we use entropy to reflect the fluency of the translation, and propose an entropy-based method. When combing the entropy-based method with the widely-used automatic evaluation metrics, such as BLEU and METEOR, the performances of these metrics are improved.

One purpose of automatic evaluation metrics is to improve the quality of machine translation systems. So, in the future, we will use the combination of entropy-based method and widely-used metrics in the tuning process to improve the translation quality, such as MERT (Minimum Error Rate Training) [Och2003].