Recently, sequence-to-sequence (seq-to-seq) models have been successfully applied in text-to-speech (TTS) to synthesize speech for single-language text. To synthesize speech for multiple languages usually requires multi-lingual speech from the target speaker. However, it is both laborious and expensive to collect high-quality multi-lingual TTS data for the target speakers. In this paper, we proposed to use low-quality code-switched found data from the non-target speakers to achieve cross-lingual voice cloning for the target speakers. Experiments show that our proposed method can generate high-quality code-switched speech in the target voices in terms of both naturalness and speaker consistency. More importantly, we find that our method can achieve a comparable result to the state-of-the-art (SOTA) performance in cross-lingual voice cloning. 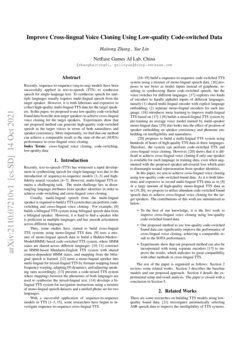 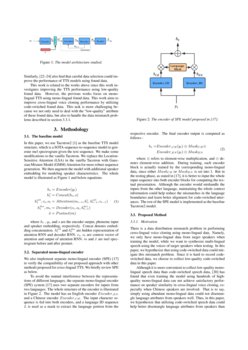 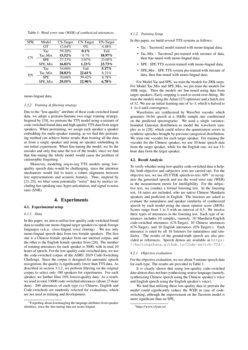 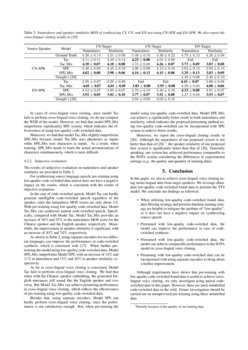 uses a mixture of mono-lingual speech data to build a Hidden-Markov-Model(HMM) based code-switched TTS system, where HMM states are shared across different languages.

[4730269, 5153557] construct an HMM-based Mandarin-English TTS system with shared context-dependent HMM states, and mapping from the bilingual speech is learned. [He2012TurningAM] turns a mono-lingual speaker into multi-lingual for mixed-lingual TTS by formant mapping based frequency warping, adapting F0 dynamics, and adjusting speaking rates accordingly. [Sitaram2016ExperimentsWC] presents a code-mixed TTS system where mappings between the phonemes of both languages are used to synthesize the mixed-lingual text. [Chandu2017Speech] develops a bi-lingual TTS system for navigation instructions using a mixture of mono-lingual speech datasets and a unified phone set for two languages.

[48331] proposes to build a multi-lingual TTS system using hundreds of hours of high-quality TTS data in three languages. Therefore, the system can perform code-switched TTS and cross-lingual voice cloning. However, [48331] shows that it is difficult to achieve cross-lingual voice cloning if only one speaker is available for each language in training data, even when augmented with the proposed speaker-adversarial loss which aims to disentangle textual representation from speaker identities.

In this paper, we aim to achieve cross-lingual voice cloning using low-quality code-switched found data. As it is both laborious and expensive to record multi-lingual TTS data as in [Traber99frommultilingual] or a large amount of high-quality mono-lingual TTS data as in [DBLP:conf/interspeech/XueSXXW19, 48331], we propose to utilize abundant code-switched found speech data to achieve cross-lingual voice cloning for the target speakers. The contributions of this work are summarised as below:

The rest of the paper is organized as follows: Section 2 reviews some related works. Section 3 describes the baseline models and our proposed approach. Section 4 details the experimental setup and result analysis. The paper is closed with a conclusion in Section 5.

This work is related to the works above since this work investigates improving the TTS performance using low-quality found data. However, the previous works focus on mono-lingual TTS using mono-lingual found data. This work aims to improve cross-lingual voice cloning performance by utilizing code-switched found data. This task is more challenging because we not only need to deal with the “low-quality” attribute of these found data, but also to handle the data mismatch problems described in section 3.3.1.

as the baseline TTS model structure, which is a SOTA sequence-to-sequence model to generate mel spectrogram given the text sequence. We make some modifications to the vanilla Tacotron. We replace the Location-Sensitive Attention (LSA) in the vanilla Tacotron with Gaussian Mixture Model (GMM) Attention for more robust sequence generation. We then augment the model with additional speaker embedding for modeling speaker characteristics. The whole model is illustrated as Figure

are hidden representation of attention RNN and decoder RNN.

m and ^x are mel spectrogram before and after postnet.

We also implement separate mono-lingual encoder (SPE) [8682927] to verify the compatibility of our proposed approach with other methods proposed for cross-lingual TTS. We briefly review SPE as below.

To avoid the mutual interference between the representations of different languages, the separate mono-lingual encoder (SPE) system [8682927] uses two separate encoders for inputs from two languages. The whole structure of the encoder is illustrated in Figure 2. The model has an English encoder Encoder_EN and a Chinese encoder Encoder_CH. The input character sequence is fed into both encoders, and a language ID sequence L is used as a mask to extract the language portion from the respective encoder. The final encoder output is computed as follows :

where ⊗ refers to element-wise multiplication, and ⊕ denotes element-wise addition. During training, each encoder block is actually trained by the corresponding mono-lingual data, since either MaskCH or MaskEN is set into 1. But in the testing phase, as stated in [8682927], it is better to input the whole input sequence into both encoder blocks for computing the textual presentation. Although the encoder would mishandle the inputs from the other language, maintaining the whole context information could help reduce the mismatches in the language boundaries and learn better alignment for code-switched utterances. The rest of the SPE model is implemented as the baseline Tacotron2 model.

Although it is more convenient to collect low-quality mono-lingual speech data than code-switched speech data, [48331] has found that even training the model using hundreds of high-quality mono-lingual data can not achieve satisfactory performance on speaker similarity in cross-lingual voice cloning, especially when Chinese speakers are involved. That is to say, simply using abundant mono-lingual data could not disentangle language attributes from speakers well. Thus, in this paper, we hypothesize that utilizing code-switched speech data could help better disentangle language attributes from speakers than mono-lingual data.

Due to the “low-quality” attribute of these code-switched found data, we adopt a pretrain-finetune two-stage training strategy. Inspired by [DBLP:conf/interspeech/XueSXXW19], we pretrain the TTS model using a mixture of code-switched found data and high-quality TTS data from target speakers. When pretraining, we assign each speaker a speaker embedding for multi-speaker training, as we find this pretraining method can achieve better results than treating all the data as from a single speaker and using no speaker embedding in our initial experiment. When fine-tuning the model, we fix the encoder and only fine-tune the rest of the model, since we find that fine-tuning the whole model would cause the problem of catastrophic forgetting. 111Forgetting about disentangling the language attributes from speaker identities, since the fine-tuning data are mono-lingual.

, we filter some potentially “noisy” data by metrics including fast speaking rate, hypo-articulation, and signal to noise ratio (SNR).

. The number of training utterances for each speaker is 5000, with in total 10 hours of speech. For the low-quality code-switched data, we use the code-switched corpus of the ASRU 2019 Code-Switching Challenge. Since the corpus is designed for automatic speech recognition, the quality is significantly lower than TTS data. As described in section

3.3.2, we perform filtering on the original corpus to select only 100 speakers for experiments. For each speaker, we further filter 10% lowest-quality data. As a result, we used in total 33000 code-switched utterances (about 27-hour data). 200 utterances of each type (i.e Chinese, English and Code-switched) are randomly selected for evaluations, which are not used in training and development.

In this paper, we build several TTS systems as follows:

Waveforms are synthesized by WaveNet vocoder which generates 16-bit speech at a 16kHz sample rate conditioned on the predicted spectrograms. We used a single variance-bounded Gaussian distribution to model the waveform samples as in

To verify whether using low-quality code-switched data is helpful, both objective and subjective tests are carried out. For the objective test, we use iFLYTEK speech-to-text API 222https://www.xfyun.cn/ to recognize the generated speech and use the word error rate (WER) as the measurement metric for intelligibility. For the subjective test, we conduct a formal listening test. In the listening test, 16 raters are included, who are native Chinese Mandarin speakers and proficient in English. The listeners are asked to evaluate the naturalness and speaker similarity of synthesized speech by each model using the mean opinion score (MOS). Scores range from 1 to 5 with an interval of 0.5. We involve three types of utterances in the listening test. Each type of utterances includes 10 samples, (namely, 10 Mandarin-English code-switched utterances (CS-Target), 10 Chinese utterances (CN-Target), and 10 English utterances (EN-Target).). Each utterance is rated by all 16 listeners for naturalness and similarity. The results of the ground-truth speech are also provided as references. Speech demos are available at https://haitongzhang.github.io/Code-switch-TTS/ .

For the objective evaluation, we use about 5-minute speech data for each type. The results are provided in Table 1.

We find that utilizing these low-quality data to pretrain the model could significantly reduce the WER in case of code-switching, although the improvement on the Tacotron model is more significant than on SPE.

Moreover, we find that model Tac_Mix slightly outperforms SPE_Mix because model Tac_Mix uses phonemes as inputs while SPE_Mix uses characters as inputs. As a result, when training, SPE_Mix needs to learn the actual pronunciations of characters simultaneously, which is more difficult.

The results of subjective evaluation on naturalness and speaker similarity are provided in Table 2.

For synthesizing source language speech, pre-training using low-quality code-switched data almost does not have a negative impact on the results, which is consistent with the results of objective evaluation.

As shown in Table 2, using separate encoders for two different languages can improve the performances in code-switched synthesis, which is consistent with [8682927]. When further pre-training the model using low-quality code-switched data, Model SPE_Mix outperforms Model SPE, with an increase of 18% and 11% in naturalness and 15% and 30% in speaker similarity, respectively.

Besides that, using separate encoders, Model SPE can hardly perform cross-lingual voice cloning, since the performance is not satisfactory enough. But, when pre-training the model using low-quality code-switched data, Model SPE_Mix can achieve a significantly better result in both naturalness and similarity, which indicates the proposed pretraining method using low-quality code-switched can be incorporated with SPE system to achieve better results.

Moreover, we report the cross-lingual cloning results in [48331]. Although the naturalness of our proposed system is not better than that of [48331] 333Partially because of the quality of our training data, the speaker similarity of our proposed best system is significantly better than that of [48331]. Generally speaking, our system has achieved performance comparable to the SOTA system considering the differences in experimental settings (e.g., the quality and quantity of training data).

In this paper, we aim to achieve cross-lingual voice cloning using mono-lingual data from target speakers. We leverage abundant low-quality code-switched found data to pretrain the TTS model. We conclude our findings as followed: