The quick and pervasive infiltration of decision support systems, artificial intelligence, and data mining in consumer electronics and everyday life in general has been significant in recent years. Fields such as UX have been facilitating the integration of such technologies into software and hardware, but the back-end processing is still based on binary foundations. This article describes an approach to mining for imprecise temporal associations among events in data streams, taking into account the very natural concept of approximation. This type of association analysis is likely to lead to more meaningful and actionable decision support systems. 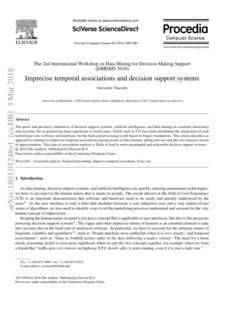 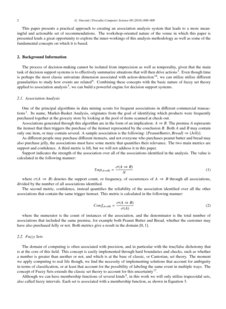 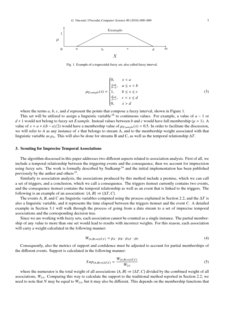 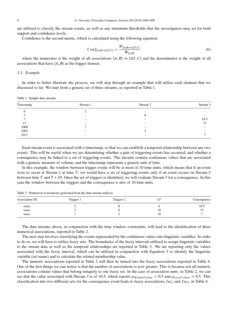 As data mining, decision support systems, and artificial intelligence are quickly entering mainstream technologies, we have to account for the human nature that is innate in people. The recent interest in the field of User Experience (UX) is an important demonstration that software and hardware need to be easily and quickly understood by the usershassenzahl2006user . As the user interface is only a filter that mediates between a very subjective user and a very matter-of-fact series of algorithms, we also need to identify ways to let the underlying processes understand and account for the very human concept of imprecision.

Keeping the human nature in mind is not just a concept that is applicable to user interfaces, but also to the processes powering decision support systemsbarthelemy2002human . The vague and often imprecise nature of humans is an essential element to take into account also in the back-end of analytical software. In particular, we have to account for the arbitrary nature of linguistic variables and quantifiersmartinez2010computing , such as ”People purchase more umbrellas when it is very cloudy,” and temporal associationsale2000approach , such as ”Sales in football jerseys spike in the days following a team’s victory.” The need for a more elastic reasoning model is even more significant when we put the two concepts together, for example when we warn a friend that ”traffic gets very intense on highway XYZ shortly after it starts raining, even if it is just a light rain.”

This paper presents a practical approach to creating an association analysis system that leads to a more meaningful and actionable set of recommendations. The workshop-oriented nature of the venue in which this paper is presented lends a great opportunity to explore the inner-workings of this analysis methodology as well as some of the fundamental concepts on which it is based.

The process of decision-making cannot be isolated from imprecision as well as temporality, given that the main task of decision support systems is to effectively summarize situations that will then drive actionsaronson2005decision . Even though time is perhaps the most classic univariate dimension associated with action-detectionyamato1992recognizing , we can utilize utilize different granularities to study how events are relatedghorbani2017methodology . Combining these concepts with the basic nature of fuzzy set theory applied to association analysischen2009mining , we can build a powerful engine for decision support systems.

One of the principal algorithms in data mining scouts for frequent associations in different commercial transactions agrawal1994fast . Its name, Market-Basket Analysis, originates from the goal of identifying which products were frequently purchased together at the grocery store by looking at the pool of items scanned at check-out.

Associations generated through this algorithm are in the form of an implication: A⇒B. The premise A represents the itemset that then triggers the purchase of the itemset represented by the conclusion B. Both A and B may contain only one item, or may contain several. A sample association is the following: {PeanutButter,Bread}⇒{Jelly}.

As different people may purchase different itemsets, and not everyone who purchases peanut butter and bread may also purchase jelly, the associations must have some metric that quantifies their relevance. The two main metrics are support and confidence. A third metric is lift, but we will not address it in this paper.

The second metric, confidence, instead quantifies the reliability of the association identified over all the other associations that contain the same trigger itemset. This metric is calculated in the following manner:

where the numerator is the count of instances of the association, and the denominator is the total number of associations that included the same premise, for example both Peanut Butter and Bread, whether the customer may have also purchased Jelly or not. Both metrics give a result in the domain [0,1].

The domain of computing is often associated with precision, and in particular with the true/false dichotomy that is at the core of this field. This concept is easily implemented through hard boundaries and checks, such as whether a number is greater than another or not, and which is at the base of classic, or Cantorian, set theory. The moment we apply computing to real life though, we find the necessity of implementing solutions that account for ambiguity in terms of classification, or at least that account for the possibility of labeling the same event in multiple ways. The concept of Fuzzy Sets extends the classic set theory to account for this uncertainty

Although we can have membership functions of several kinds klir1995fuzzy , in this work we will only utilize trapezoidal sets, also called fuzzy intervals. Each set is associated with a membership function, as shown in Equation 3.

where the terms a, b, c, and d represent the points that compose a fuzzy interval, shown in Figure 1.

This set will be utilized to assign a linguistic variable zadeh1975concept to continuous values. For example, a value of a−1 or d+1 would not belong to fuzzy set Example. Instead values between b and c would have full membership (μ=1). A value of x=a+((b−a)/2) would have a membership value of μExample(x)=0.5. In order to facilitate the discussion, we will refer to A as any instance of x that belongs to stream A, and to the membership weight associated with that linguistic variable as μA. This will also be done for streams B and C, as well as the temporal relationship ΔT.

The algorithm discussed in this paper addresses two different aspects related to association analysis. First of all, we include a temporal relationship between the triggering events and the consequence, then we account for imprecision using fuzzy sets. The work is formally described by Sudkamp sudkamp2005examples and the initial implementation has been published previously by the author and others vincenti2005data .

Similarly to association analysis, the associations produced by this method include a premise, which we can call a set of triggers, and a conclusion, which we call a consequence. The triggers itemset currently contains two events, and the consequence itemset contains the temporal relationship as well as an event that is linked to the triggers. The following is an example of an association: {A,B}⇒{ΔT,C}.

will walk through the process of going from a data stream to a set of imprecise temporal associations and the corresponding decision tree.

Since we are working with fuzzy sets, each association cannot be counted as a single instance. The partial membership of any value to more than one set would lead to results with incorrect weights. For this reason, each association will carry a weight calculated in the following manner:

Consequently, also the metrics of support and confidence must be adjusted to account for partial memberships of the different events. Support is calculated in the following manner:

, but it may also be different. This depends on the membership functions that are utilized to classify the stream events, as well as any minimum thresholds that the investigators may set for both support and confidence levels.

Confidence is the second metric, which is calculated using the following equation:

In order to better illustrate the process, we will step through an example that will utilize each element that we discussed so far. We start from a generic set of three streams, as reported in Table 1.

Each stream event is associated with a timestamp, so that we can establish a temporal relationship between any two events. This will be useful when we are determining whether a pair of triggering events has occurred, and whether a consequence may be linked to a set of triggering events. The streams contain continuous values that are associated with a generic measure of volume, and the timestamp represents a generic unit of time.

In this example, the window between trigger events will be at most of 10 time units, which means that if an event were to occur at Stream 1 at time T, we would have a set of triggering events only if an event occurs on Stream 2 between time T and T+10. Once the set of triggers is identified, we will evaluate Stream 3 for a consequence. In this case the window between the triggers and the consequence is also of 10 time units.

The data streams above, in conjunction with the time window constraints, will lead to the identification of three numerical associations, reported in Table 2.

The process of mining for imprecise temporal associations is similar to most other data mining processes kurgan2006survey . The process utilized by this method is reported in Figure 2. The solid lines in the figure represent data flows between processes, while the dashed lines represent influences between processes. The iterative nature of identifying and refining membership functions is the core process that regulates the imprecision associated with any associations discovered. Generating membership functions can be as simple as making educated guesses, or it can be as complex as utilizing elaborate artificially intelligent methodsmedasani1998overview .

The knowledge base can assume many forms, but the most useful representation that we have found in the context of decision support systems is inspired by decision trees. The associations reported in Table 4 can easily be turned into a decision tree, as reported in Figure 3.

This representation leverages a very visual layout that will help decision-makers in the process. The leaf nodes also report Support (Equation 5) and Confidence (Equation 6) to facilitate the consumption of the findings of this algorithm. The resulting tree can be compared to Frequent-Pattern (FP) Trees han2000mining , already in use in data mining lin2010linguistic .

The material discussed in this paper guides the reader through the foundations and the basic concepts that are involved with mining for imprecise temporal associations in data streams. The integration of such analysis in the decision-making process is essential, especially given the volume and nature of today’s data, as well as its importance in terms of operationalizing the findings quickly and effectively. The work described in this paper has demonstrated its relevance in the fields of medicine and energy utilization, and the findings will be published at a later date.

The next steps for this research focus on algorithmic improvements. In particular, the system is currently limited in the number of streams that it processes to 2 for the triggering itemset and one for the consequence. In order to extend classic association analysis algorithms, this system will also have to accommodate itemsets with one or more streams for either the trigger or the consequence.

Given the nature of continuous stream analysis, the number of potential associations is significant and the runtime for the system can be quite tedious. Incrementing the number of streams to analyze must be accompanied by a different implementation, which should include distributed and parallel processing. Currently the system operates on a single node and does not distributed the work among multiple processors. The distribution of processing during the associations mining phase will significantly increase the capabilities of this system.