The study of tensor network theory is an important field and promises a wide range of experimental and quantum information theoretical applications. Matrix product state is the most well-known example of tensor network states, which provides an effective and efficient representation of one-dimensional quantum systems. Indeed, it lies at the heart of density matrix renormalization group (DMRG), a most common method for simulation of one-dimensional strongly correlated quantum systems. It has got attention from several areas varying from solid-state systems to quantum computing and quantum simulators. We have considered maximally entangled matrix product states (GHZ and W). Here, we designed the quantum circuits for implementing the matrix product states. In this paper, we simulated the matrix product states in customized IBM (2-qubit, 3-qubit and 4-qubit) quantum systems and determined the probability distribution among the quantum states. 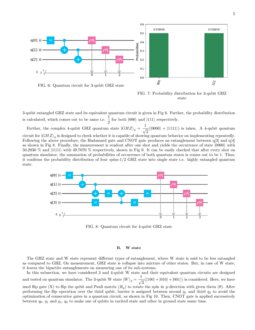 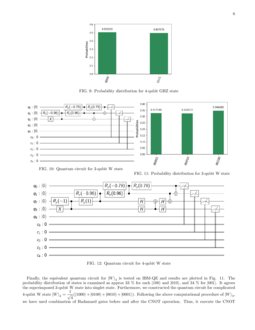 Simulation of Matrix Product State on a Quantum Computer

The study of tensor network theory is an important field and promises a ...
Amandeep Singh Bhatia, et al. ∙

We establish a direct connection between general tensor networks and dee...
Or Sharir, et al. ∙

The physical structure of grammatical correlations: equivalences, formalizations and consequences

In this paper we consider some well-known facts in syntax from a physics...
Angel J. Gallego, et al. ∙

Agents, subsystems, and the conservation of information

Dividing the world into subsystems is an important component of the scie...
Giulio Chiribella, et al. ∙

I Introduction and motivation

Since, Feynman 1 proposed the idea of quantum computing and stated that quantum computers can simulate quantum mechanical systems exponentially faster, outstanding advancement has been made in simulation of quantum systems. In the last decade, the quantum simulation of closed and open systems has got overwhelming response among research communities. It promises powerful applications in the field of high energy physics, quantum chemistry and condensed matter, which are intractable on classical computers. The field of quantum computing is concern with the behavior and nature of energy at the quantum level to improve the efficiency of computations. The main aim of running quantum algorithms on quantum computers to solve the various computational tasks more efficiently and in less time as compared to existing classical ones. The quantum principle of superposition and entanglement is the backbone of quantum algorithms, which allows us to perform operations in large Hilbert spaces exponentially.

. Tensor network states are classified on the basis of dimensions along which the tensors are crossed. Thus, it manages the exponentially growing Hilbert space by restricting the entanglement between two parts of the quantum system

4. Although, the dimension of Hilbert space increases exponentially with the increase in size of the system, there exists some quantum many-body systems whose implementations are realizable by classical computers. The density matrix renormalization group (DMRG) has been applied in lattice field theory to study particle physics with Monte Carlo simulations 33; 34. A matrix product state (MPS) (one-dimensional system) is an example of tractable quantum systems numerically. In MPS, low entangled states are efficiently represented, which is not with large dimensions tensor network states. It has some basic properties such as dense nature, finite correlation, translational invariance and one-dimensional area law 3.

In the past few years, the research has been increased in simulating experiments on IBM (International Business Machines Corporation) Q Experience platform. IBM has given access to real quantum computers and simulators, which allows researchers to develop, test and implement their experiments 5. Through IBM, we can examined the simulation results on classical computer and analysis on available quantum hardware to get a feel of the quantum system. It is becoming far more widespread and efficiently used to simulate several computational problems quickly 6. Currently, the platform has been extensively used to implement several experiments such as quantum tunneling simulation 7, Ising model simulation hard problems 9, quantum algorithms 10, quantum error correction 11

14, benchmarking the quantum gates 28 to name a few.

24 and MPS based efficient, productive applications for high performance computers 29 and can be employed in various emerging technologies such as optical computing, quantum cryptography, image recognition and dynamic quantum clustering 30. MPS provides an efficient approximation of realistic local Hamiltonians and can be generated by tensors sequentially. We focused on the maximum entangled MPS (GHZ and W states). Zizzi 32 has shown that it is possible to preserve the probabilities by executing a reversible quantum measurement on closed systems. In previous paper, we have efficiently simulated MPS with a broader quantum computational theory and investigated their relationship with quantum finite-state machine (QFSM) using unitary criteria 16. In this paper, we have implemented simulation on customized real IBM quantum computer and simulator. Further, the probability distributions among qubits is investigated. The paper is organized as follows: Section 2 is devoted to the family of matrix product state. In Section 3, simulation results are presented. Finally, Section 4 is the conclusion.

Matrix product state is complete. Basically, it concede the extent of entanglement in bond dimensions. In fact, any pure quantum state can be described by substituting the coefficients e.g. rank-N tensor by N-rank 3 tensors and 2-rank by 2 tensors. In MPS, a pure quantum state |ϕ⟩ is represented as:

where Mσii are complex square matrices, d is dimension, σi represents the indices i.e. {0, 1} for qubits and Tr() denotes trace of matrices 17. Figure 1 shows the MPS as one-dimensional array of tensors and an instance of finite system of 5 sites 3. The GHZ state and W state can be represented using MPS:

Before, we proceed to the simulation of matrix product state, it is useful to define the notion of some operators used over single qubit in quantum computation. The controlled NOT operator (CNOT) has two inputs as well as outputs 17. The flip operation is performed over the target qubit when the first qubit is 1. The quantum circuit for CNOT operator is shown in Fig 3 and its matrix representation is given in Eq. (10). The other highly used quantum operators are flip operator (X): flips the qubit, identity operator (I): it does nothing i.e. outputs the qubit as it is, Hadamard operator (H): it generates superposition of states with equal probability in computational basis. Their matrices are given in Eq. (7-9) respectively. In quantum circuits, such operators can be represented using quantum gates. The universal set of quantum gates are shown in Fig 2.

Experimentally, we utilized the IBM Quantum Experience (IBM-QE), a universal customized (2-qubit, 3-qubit and 4-qubit) quantum computer to perform our simulation. The following are the steps to test experiment on IBM-QE:

Here, we started with the maximally entangled 2-qubit GHZ state, which is represented as |GHZ⟩2=1√2(|00⟩+|11⟩). Initially, we have taken two quantum as well as classical registers. Both quantum registers are initialized to zero. The Hadamard gate and CNOT gate is used to create an entanglement between both qubits, followed by measurement of quantum state q[0] and q[1] to classical registers c[0] and c[1] respectively. Correspondingly, the quantum circuit for 2-qubit GHZ state is shown in Fig. 4. Further, the probability distribution is determined as 53.3906 % for state |00⟩ and 49.6094 % for |11⟩ respectively i.e. on summation it satisfies unitary property. The histogram of probability distribution for |GHZ⟩2 is shown in Fig. 5.

Next, we have considered 3-qubit GHZ state interpreted as |GHZ⟩3=1√2(|000⟩+|111⟩). To simulate the |GHZ⟩3 on quantum computer, we have taken three quantum registers to carry out computation and three classical registers for measurement purpose at the end. The Hadamard and CNOT operation between first and second quantum qubit is similar to |GHZ⟩2. Then, the second CNOT operation is performed between second and third quantum qubit i.e. flips the q[3] whenever the q[2] is in excited state. The final results can be restirved from classical registers. It creates the 3-qubit entangled GHZ state and its equivalent quantum circuit is given in Fig 6. Further, the probability distribution is calculated, which comes out to be same i.e. 12 for both |000⟩ and |111⟩ respectively.

Further, the complex 4-qubit GHZ quantum state |GHZ⟩4=1√2(|0000⟩+|1111⟩) is taken. A 4-qubit quantum circuit for |GHZ⟩4 is designed to check whether it is capable of showing quantum behavior on implementing repeatedly. Following the above procedure, the Hadamard gate and CNOT gate produces an entanglement between q[3] and q[4] as shown in Fig 8. Finally, the measurement is readout after one shot and yields the occurrence of state |0000⟩ with 50.2930 % and |1111⟩ with 49.7070 % respectively, shown in Fig 9. It can be easily checked that after every shot on quantum simulator, the summation of probabilities of occurrence of both quantum states is comes out to be 1. Thus, it confirms the probability distribution of four spins-1/2 GHZ state into single state i.e. highly entangled quantum state.

The GHZ state and W state represent different types of entanglement, where W state is said to be less entangled as compared to GHZ. On measurement, GHZ state is collapse into mixture of other states. But, in case of W state, it leaves the bipartite entanglements on measuring one of its sub-systems.

In this subsection, we have considered 3 and 4-qubit W state and their equivalent quantum circuits are designed and tested on quantum simulator. The 3-qubit W state |W⟩3=1√3(|100⟩+|010⟩+|001⟩) is considered. Here, we have used flip gate (X) to flip the qubit and Pauli matrix (Ry) to rotate the spin in y-direction with given theta (θ). After performing the flip operation over the third qubit, barrier is assigned between second q1 and third q2 to avoid the optimization of consecutive gates in a quantum circuit, as shown in Fig 10. Then, CNOT gate is applied successively between q0, q1 and q1, q2 to make one of qubits in excited state and other in ground state same time.

Finally, the equivalent quantum circuit for |W⟩4 is tested on IBM-QE and results are plotted in Fig. 11. The probability distribution of states is examined as approx 33 % for each |100⟩ and |010⟩, and 34 % for |001⟩. It agrees the superimposed 3-qubit W state into singlet state. Furthermore, we constructed the quantum circuit for complicated 4-qubit W state |W⟩4=1√4(|1000⟩+|0100⟩+|0010⟩+|0001⟩). Following the above computational procedure of |W⟩3, we have used combination of Hadamard gates before and after the CNOT operation. Thus, it execute the CNOT operation in reverse direction using the Kronecker product (H⊗H) i.e. equal to 1√2[HHH−H] (4×4) matrix. The constructed quantum circuit for |W⟩4 is shown in Fig 12. Finally, after simulation, the measurement is retrieved from classical registers and the histogram of probability distribution among the states is plotted in Fig 13. It shows the occurrence of state |1000⟩ and |0010⟩ with approx 25 % each, 24 % of |0100⟩ and state |0001⟩ with 26 % approximately. Thus, it can be easily checked that n-qubit GHZ and W state can be efficiently simulated on a quantum computer after constructing complicated quantum circuits.

In conclusion, we have demonstrated the two highly entangled matrix product states (GHZ and W). The main focus of this paper is towards the simulation on a quantum computer. We have designed quantum circuits for (2, 3 and 4-qubit) GHZ state and (3 and 4-qubit) W state. Further, the constructed quantum circuits have been simulated on a quantum computer and their probability distribution among the quantum states is investigated. To conclude, we have noticed that any matrix product state can be efficiently simulated on a quantum computer. This allows us to employ these circuits for efficient and productive quantum computational theoretical and experimental applications such as quantum machine learning, MPS based quantum algorithms and can be used in condensed matter physics for quantum state tomography in future.