We present an implementation of E-anti-unification as defined in Heinz (1995), where tree-grammar descriptions of equivalence classes of terms are used to compute generalizations modulo equational theories. We discuss several improvements, including an efficient implementation of variable-restricted E-anti-unification from Heinz (1995), and give some runtime figures about them. We present applications in various areas, including lemma generation in equational inductive proofs, intelligence tests, diverging Knuth-Bendix completion, strengthening of induction hypotheses, and theory formation about finite algebras. 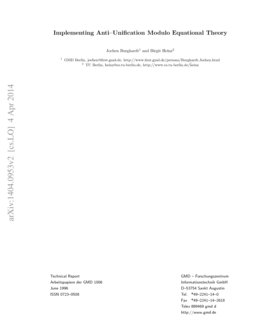 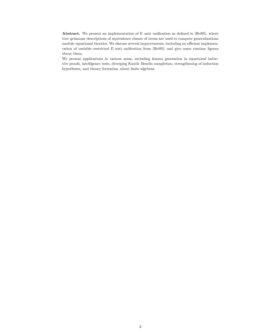 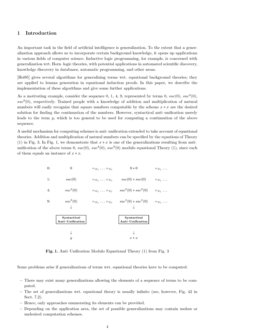 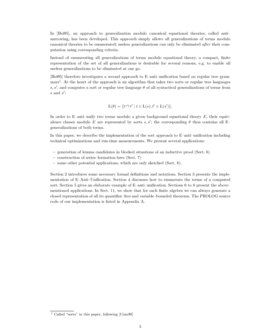 An important task in the field of artificial intelligence is generalization. To the extent that a generalization approach allows us to incorporate certain background knowledge, it opens up applications in various fields of computer science. Inductive logic programming, for example, is concerned with generalization wrt. Horn–logic theories, with potential applications in automated scientific discovery, knowledge discovery in databases, automatic programming, and other areas.

[Hei95] gives several algorithms for generalizing terms wrt. equational background theories; they are applied to lemma generation in equational induction proofs. In this paper, we describe the implementation of these algorithms and give some further applications.

As a motivating example, consider the sequence 0, 1, 4, 9, represented by terms 0, suc(0), suc4(0), suc9(0), respectively. Trained people with a knowledge of addition and multiplication of natural numbers will easily recognize that square numbers computable by the scheme x∗x are the desired solution for finding the continuation of the numbers. However, syntactical anti–unification merely leads to the term y, which is too general to be used for computing a continuation of the above sequence.

A useful mechanism for computing schemes is anti–unification extended to take account of equational theories. Addition and multiplication of natural numbers can be specified by the equations of Theory (1) in Fig. 3. In Fig. 1, we demonstrate that x∗x is one of the generalizations resulting from anti–unification of the above terms 0, suc(0), suc4(0), suc9(0) modulo equational Theory (1), since each of them equals an instance of x∗x.

Some problems arise if generalizations of terms wrt. equational theories have to be computed:

In order to E–anti–unify two terms modulo a given background equational theory E, their equivalence classes modulo E are represented by sorts s,s′; the corresponding θ then contains all E–generalizations of both terms.

In this paper, we describe the implementation of the sort approach to E–anti–unification including technical optimizations and run-time measurements. We present several applications:

Section 2 introduces some necessary formal definitions and notations. Section 3 presents the implementation of E–Anti–Unification. Section 4 discusses how to enumerate the terms of a computed sort. Section 5 gives an elaborate example of E–anti–unification. Sections 6 to 8 present the above–mentioned applications. In Sect. 11, we show that for each finite algebra we can always generate a closed representation of all its quantifier–free and variable–bounded theorems. The PROLOG source code of our implementation is listed in Appendix 0.A.

Definition 1. Let V be an enumerable set of variables, F a finite set of function symbols, each with fixed arity; ar(f) denotes the arity of f∈F. Terms are built from V∪F; T denotes the set of terms.

We assume familiarity with the classic definitions and notations of terms. We say that a term t starts with a function symbol f if t=f(t1,…,tn) for some terms t1,…,tn. vars(t) describes the set of variables occurring in a term t∈T. A term is called linear if no variable occurs in it twice. A term t is called a ground term if t does not contain any variables.

Definition 2. Lists are built from [] and cons, written as (.) as in PROLOG; length(L) denotes the number of elements of the list L; head(L) denotes its first element. The list–comprehension notation [t∣p(t)] denotes a list of all t, such that p(t) holds, in some arbitrary order.

:= means equal by definition. A⊂B means that A is a subset of B, or A is equal to B.

t is called an instance of t′, and t′ an anti–instance of t, if a substitution σ exists such that t=σt′. If σ is a renaming, t is also called a variant of t′.

Definition 4. An equational theory E is a finite set of equations tl=tr. The relation (=E) is defined as usual as the smallest reflexive, symmetric, and transitive rewrite relation that contains E.

Note that we do not require (=E) to be computable by a confluent and noetherian term–rewriting system. However, we require that each equivalence class t– be a regular tree language.

Definition 5. Let SNAME be an enumerable set of sort names, and let the sets V, F, and SNAME be pairwise disjoint. Let S denote the set of all sort expressions; a sort expression is a sort name or has one of the forms

A sort definition is of the form sn≐se, where sn is a sort name and se is a sort expression. We say that sn is defined by se.

Given a system of sort definitions where each occurring sort name has exactly one definition, we define their semantics as their least fixed point. We denote the semantics of a sort expression s by L(s)⊂T, which has the following properties:

Observe that T⊂S, and L(t)={t} for each t∈T. The empty sort is denoted by ⊥. A sort definition of the form s≐f1(s11,…,s1n1)∣…∣fm(sm1,…,smnm) is said to be in head normal form, where s,sij∈SNAME, fi∈F∪V, and ni=ar(fi). For proof–technical reasons, we define a system of sort definitions as being in normal form if each sort definition has either the form

and if no cycles

Then, ∀t∈Tt∈L(s)↔ps(t) holds for each defined sort name s.

Definition 8. A term t is called an E-generalization of terms t1,t2 iff there exist substitutions σ1 and σ2 such that σ1t=Et1 and σ2t=Et2.

The following algorithm can be traced back to the early seventies [Plo70, Plo71, Rey70]. It takes two terms t,t′ and computes the syntactical generalization t⊓t′.

Algorithm 9. Let V be an infinite set of new variables and φ:T×T→V an injective mapping.

Since syntactical anti–unification is unique only up to renaming, the mapping φ is used to fix one concrete variable naming that is the same in all subterms. In the example in Fig. 2, the use of φ ensures that both occurrences of sg(3,4) yield the same result, viz. the variable v34.

Lemma 10. Algorithm 2 can be extended to anti–unify N terms simultaneously, requiring φ:TN→V. For any such φ and any finite V⊂V, we may define the substitutions σi for i=1,…,N by σiφ(t1,…,tN):=ti. We have dom(σi)=V for all i.

In this section, we describe the implementation of E–anti–unification based on sorts.

In Sect. 3.4, the algorithm rsgV for computing the sort of all generalization terms that contain only variables from a given set V is restated from [Hei95]. Note that all linear and nonlinear generalizations are computed in one phase only, thus saving a large amount of computation time; cf. Sect. 3.6, Fig. 15.

The algorithms from Sect. 3.2/3.3 and from Sect. 3.4 both require the representation of the equivalence classes of the input terms as sorts. In this paper, we do not treat this issue in detail; rather, we drew up the respective sort definitions manually.

In Theory (6), we have included the (−) operator, such that equivalence classes of terms are no longer regular tree languages, and hence cannot be described by our sorts; for example, the sort definition s0≐0∣…∣s0−s0∣s1−s1∣…∣si−si∣… would become infinite. We can, however, approximate the equivalence classes from below by cutting off the sort definitions at a certain n, i.e., omitting all greater numbers. Figure 5 shows the approximations of 0– to suc5(0)––––––––, where we set the cut–off point to n=5, i.e. s6−s6∣…∣si−si∣… is missing; hence, the equivalence classes do not contain terms that yield an intermediate result greater than 5 when evaluated to normal form.

[Emm94] describes an algorithm for building the sort definitions automatically from a given confluent and noetherian term–rewriting system. However, there is no implementation that fits our data structures. See also Thm. 11.1 and Cor. 11.1 in Sect. 11, which provide sufficient criteria for an equational theory in order that the equivalence classes are regular tree languages.

Algorithm 11. Let s and s′ be sort names, and θ be a new sort name. Let V be an infinite set of new variables, and φ:S×S→V an injective mapping. Define rsg(s,s′):=θ, where a new sort definition is introduced for θ:

Note that Case 1. requires us to maintain a set of argument pairs for which rsg has already been called, and to check the argument pair of each new call against this set. This set is called Occ in the implementation; it was initially implemented by a PROLOG list, then by a binary search tree, and now by a balanced binary search tree. A membership test in a balanced tree with 50 entries takes about 4 msec user time. See also Sect. 3.6 for the impact of balancing on runtime.

Assuming all sort definitions in head normal form, we can slightly improve the above algorithm in order to produce less variables. For example, given the sort definitions of s0,s1 from Fig. 23, the sort s01 computed in Fig. 24 would comprise twelve different variables if computed by rsg, while it actually – computed by hsg below – has only one variable.

Usually, most of the disjuncts in Case 2. start with different function symbols, fi≠f′j, and hence evaluate to ⊥ by Case 4. In Sect. 3.5, we will discuss an optimization that avoids these recursive calls of hsg.

Algorithms 3.2 and 3.2 can both be extended to compute the linear generalizations of N sorts simultaneously, requiring φ:SN→V. Our implementation is capable of that, and we will tacitly use rsg([s′,s′′,…,s(N)]) with N arguments where appropriate in this paper. Note that it makes sense to have multiple occurrences of the same sort among the input arguments. For example, using the sort definitions from Fig. 23, we have 0∗0⊓(0+0)∗(0+0)=v∗v∈L(hsg(s0,s0))∖L(s0). Moreover, it is important to maintain the order of argument sorts during computation, since otherwise, for example

although 1 is not equal to any instance of v01+v01. For these reasons, we treat the argument of the extended hsg as a list rather than as a set of sorts.

The result sorts of the above algorithm contains all linear generalizations, but only some nonlinear ones. That is not generally sufficient, as the example in Sect. 5 shows (see in particular the difference between s01 and s′01 in Fig. 30).

In order to obtain as well all nonlinear generalizations, which are more specific, we need a second phase which introduces common variables to related sorts. We use the abbreviation infs(V):={⋂v∈VπNi(φ−1(v))∣1⩽i⩽N}; note that φ−1 exists since φ is injective. Below, we will assume N=2 for the sake of simplicity.

[Hei95] proceeds as follows: for each set of variables {v1,…,vn} from the result sorts, whenever infs({v1,…,vn}) does not contain the empty sort, a new variable v′ is introduced which can be thought of intuitively as generalizing the sorts in infs(V), and each occurrence of each vi is replaced by vi∣v′. For example, using the definitions from Sect. 5, we have <span class="mjx-char MJXc-TeX-math-I" style="padding-top: 0.225e