An intelligent version of the sliding-puzzle game is developed using the new Go programming language, which uses a concurrent version of the A* Informed Search Algorithm to power solver-bot that runs in the background. The game runs in computer system's terminals. Mainly, it was developed for UNIX-type systems but it works pretty well in nearly all the operating systems because of cross-platform compatibility of the programming language used. The game uses language's concurrency primitives to simplify most of the hefty parts of the game. A real-time notification delivery architecture is developed using language's built-in concurrency support, which performs similar to event based context aware invocations like we see on the web platform. 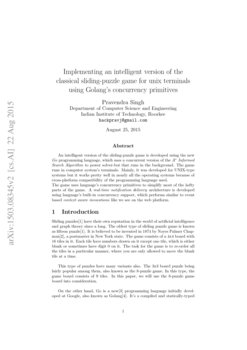 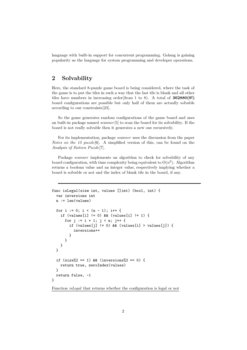 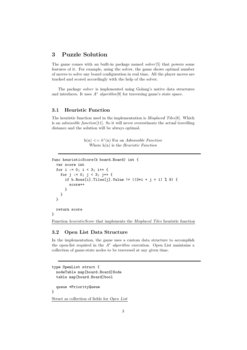 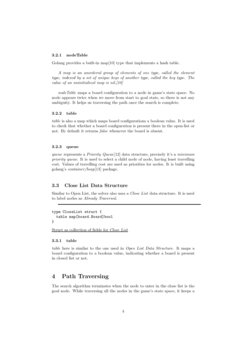 Sliding puzzles[1] have their own reputation in the world of artificial intelligence and graph theory since a long. The oldest type of sliding puzzle game is known as fifteen puzzle[1]. It is believed to be invented in 1874 by Noyes Palmer Chapman[2], a postmaster in New York state. The game consists of a 4x4 board with 16 tiles in it. Each tile have numbers drawn on it except one tile, which is either blank or sometimes have digit 0 on it. The task for the game is to re-order all the tiles in a particular manner, where you are only allowed to move the blank tile at a time.

On the other hand, Go is a new[3] programming language initially developed at Google, also known as Golang[4]. It’s a compiled and statically-typed language with built-in support for concurrent programming. Golang is gaining popularity as the language for system programming and developer operations.

Here, the standard 8-puzzle game board is being considered, where the task of the game is to put the tiles in such a way that the last tile is blank and all other tiles have numbers in increasing order(from 1 to 8). A total of 362880(9!) board configurations are possible but only half of them are actually solvable according to our constraints[23].

So the game generates random configurations of the game board and uses an built-in package named scanner[5] to scan the board for its solvability. If the board is not really solvable then it generates a new one recursively.

For its implementation, package scanner uses the discussion from the paper Notes on the 15 puzzle[6]. A simplified version of this, can be found on the Analysis of Sixteen Puzzle[7].

Package scanner implements an algorithm to check for solvability of any board configuration, with time complexity being equivalent to O(n2). Algorithm returns a boolean value and an integer value, respectively implying whether a board is solvable or not and the index of blank tile in the board, if any.

Function isLegal that returns whether the configuration is legal or not

The game comes with an built-in package named solver[5] that powers some features of it. For example, using the solver, the game shows optimal number of moves to solve any board configuration in real time. All the player moves are tracked and scored accordingly with the help of the solver.

The heuristic function used in the implementation is

Misplaced Tiles[8]. Which is an admissible function[11]. So it will never overestimate the actual travelling distance and the solution will be always optimal.

h(n) <= h∗(n) For an Admissible Function

Where h(n) is the Heuristic Function

In the implementation, the game uses a custom data structure to accomplish the open-list required in the A∗ algorithm execution. Open List maintains a collection of game-state nodes to be traversed at any given time.

A map is an unordered group of elements of one type, called the element type, indexed by a set of unique keys of another type, called the key type. The value of an uninitialized map is nil.[10]

nodeTable maps a board configuration to a node in game’s state space. No node appears twice when we move from start to goal state, so there is not any ambiguity. It helps us traversing the path once the search is complete.

queue represents a Priority Queue[12] data structure, precisely it’s a minimum priority queue. It is used to select a child node of node, having least travelling cost. Values of travelling cost are used as priorities for nodes. It is built using golang’s container/heap[13] package.

Similar to Open List, the solver also uses a Close List data structure. It is used to label nodes as Already Traversed.

table here is similar to the one used in Open List Data Structure. It maps a board configuration to a boolean value, indicating whether a board is present in closed list or not.

The search algorithm terminates when the node to enter in the close list is the goal node. While traversing all the nodes in the game’s state space, it keeps a track of all the nodes and their respective child nodes.

Generating the linked list representing path to move on

The game has its own scoring function. The package score[15] helps implementing this. At any state space node(n), the score for the game can be calculated by the function, score(n).

Where ACS(n) = Accumulated Correct Score for the node n

So in the game, the maximum possible score of 1 will be scored in only one case when all the moves from player were correct throughout the goal state. When the total number of moves is 0, the score will also be 0.

The graphic user interface for the game is built using Box-drawing characters[16], like it was used in early text-mode video hardware emulators, also known as Semigraphics[17].

It uses Golang port of the termbox library[18] for writing text-based user interfaces. Coloring the interfaces is done using normal 8-colors, with foreground and background attributes for special formatting.

A goroutine is a lightweight thread of execution. Channels are the pipes that connect concurrent goroutines. You can send values into channels from one goroutine and receive those values into another goroutine.[19]

In this case, the game uses goroutines to provide an asynchronous or non-blocking experience. So that the graphic interface of game can be drawn and acted upon as soon as the game starts while the solver stays busy solving the puzzle in the background at the same time.

Now, this can lead to a problem in slow systems. For example, when the game’s interface is visible but the solver is taking its time to solve the puzzle and the player gives any input event, the game is not likely to handle the request properly. Because the other sections of the game like ’score’ package needs the puzzle to be solved first.

To solve this, the other concurrency primitive, Channel of the language is used. It works with the goroutines and implements the notification system for the game and helps manitaining the asynchronous characteristic of the game.

The game consists of packages notification[20] and surface[21] that implements this functionality. Package notification has a channel named Tunnel, which let us flow string objects through it.

Structure of the Notification entity

The start of the game initiates a goroutine which listens to any object passing through the channel and update the notification in real-time.

So whenever a player moves in wrong direction, the game starts a new goroutine to solve the new board configuration. If the user tries to move when the solver has not yet solved the puzzle, it notifies the player to wait for a while. It invokes the Ready To Play notification as soon as the solver is done solving for the configuration to let the player know that he is ready to play. Here[22], you can see list of all the notifications used in the game.

Handling of a wrong move by player

The notification channel Tunnel is closed when the game is complete or whenever player quits the game.

The author is grateful to his Artificial Intelligence course instructor Mr. Partha Pratim Roy. Rob Pike, Ken Thompson, Robert Griesemer and many Golang contributors to make the language such stupendous. nsf(https://github.com/nsf) for developing the termbox-go library.