In this report, we review the calculation of entropy-regularised Wasserstein loss introduced by Cuturi and document a practical implementation in PyTorch. 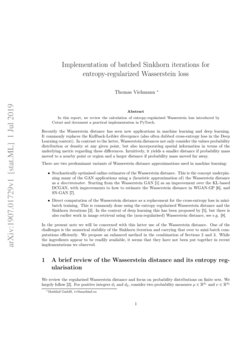 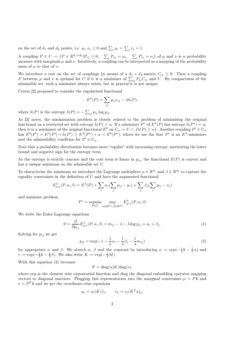 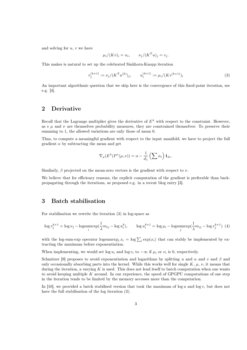 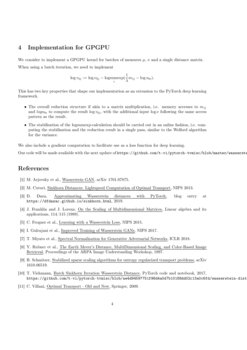 We review the regularised Wasserstein distance and focus on probability distributions on finite sets. We largely follow [2].

For positive integers d1 and d2, consider two probability measures μ∈Rd1 and ν∈Rd2 on the set of d1 and d2 points, i.e. μi,νj≥0 and ∑iμi=∑jνj=1.

A coupling P∈U:={P∈Rd1×d2|pij≥0,∑jpij=μi,∑ipij=νi} of μ and ν is a probability measure with marginals μ and ν. Intuitively, a coupling can be interpreted as a mapping of the probability mass of μ to that of ν.

We introduce a cost on the set of couplings by means of a d1×d2-matrix cij≥0. Then a coupling P between μ and ν is optimal for C if it is a minimiser of E0(P)=∑ijpijcij and U. By compactness of the admissible set, such a minimiser always exists, but in general it is not unique.

where h(P) is the entropy h(P)=−∑ijpijlogpij.

As [2] notes, the minimisation problem is closely related to the problem of minimising the original functional on a restricted set with entropy h(P)≥α: If a minimiser P∗ of Eλ(P) has entropy h(P∗)=α, then it is a minimiser of the original functional E0 on Uα:=U⊂{h(P)≥α}: Another coupling P′∈Uα has E0(P′)=Eλ(P′)+h(P′)≥Eλ(P∗)+α=E0(P∗), where we use the that P∗ is an Eλ-minimiser and the admissibility condition for P′∈Uα.

Note that a probability distribution becomes more “regular” with increasing entropy, motivating the lower bound and negative sign for the entropy term.

As the entropy is strictly concave and the cost term is linear in pij, the functional Eλ(P) is convex and has a unique minimum on the admissible set U.

We write the Euler-Lagrange equations

Solving for pij we get

With this equation (2) becomes

where exp is the element wise exponential function and diag

the diagonal embedding operator mapping vectors to diagonal matrices. Plugging this representation into the marginal constraints

and solving for u, v we have

This iteration alternatingly enforces each of the two marginal constraints. An important algorithmic question that we skip here is the convergence of this fixed-point iteration, see e.g. [5].

Recall that the Lagrange multiplier gives the derivative of Eλ with respect to the constraint. However, as s μ and ν are themselves probability measures, they are constrained themselves: To preserve their summing to 1, the allowed variations are only those of mean 0.

Thus, to compute a meaningful gradient with respect to the input manifold, we have to project the full gradient α by subtracting the mean and get

Similarly, β projected on the mean-zero vectors is the gradient with respect to ν. This way of obtaining the gradient has been proposed by [6].

For stabilisation we rewrite the iteration (3) in log-space as

with the log-sum-exp operator logsumexpixi=log∑iexp(xi) that can stably be implemented by extracting the maximum before exponentiation.

Schmitzer [11] proposes to avoid exponentiation and logarithms by splitting u and α and v and β and only occasionally absorbing parts into the kernel. While this works well for single K, μ, ν, it means that during the iteration, a varying K is used. This does not lend itself to batch computation when one wants to avoid keeping multiple K around. In our experience, the speed of GPGPU computations of one step in the iteration tends to be limited by the memory accesses more than the computation.

In [12], we provided a batch stabilised version that took the maximum of logu and logv, but does not have the full stabilisation of the log iteration (4).

We consider to implement a GPGPU kernel for batches of measures μ, ν and a single distance matrix.

When using a batch iteration, we need to implement

This has two key properties that shape our implementation as an extension to the PyTorch deep learning framework.

Incidentally, the logarithm of the energy E0(P) of a minimiser P has a very similar structure, with

being the elementwise product, so we can stably compute this loss function with the same GPU kernel as the iteration step.

can be explicitly computed, but that we would prefer not to realise tensors in

Rbatchsize×d1×d2. For applications with the cost function based on e.g. Euclidean metrics, one might, instead, trade compute for memory and re-create entries of the distance matrix as they are needed.

Our goal is to enable the use of the (entropy-regularised) Wasserstein loss for deep learning applications.

As is commonly done, we return E0 as calculated in (5) for the (approximative) minimiser of Eλ as the value of our loss function. The gradient as computed in Section 2 is that of Eλ. Note that the gradient is off for two reasons: First, we use the Lagrange mutliplier for Eλ(P∗) as the gradient for E0(P∗), i.e. we optimize Eλ but measure E0. This seems to work reasonably well for many applications and small λ, but for cases when it does not [8] offer an improved gradient. The second source of error ist that the iteration might not have fully converged. Empirically, however, it seems that if we iterate often enough (1000 iterations), the gradient is sufficiently good to pass PyTorch’s gradcheck tests (we used distribution vectors of length 100 and λ=0.001).

Compared to existing code and libraries, our code combines a stable, memory-efficient logspace implementation that works for batches and uses the Lagrange-Multiplier-based gradient. In [4, S 9.1.3] advocate the use of automatic differentiation, in the authors’ words: In challenging situations in which the size and the quantity of histograms to be compared are large, the computational budget to compute a single Wasserstein distance is usually limited, therefore allowing only for a few Sinkhorn iterations. When the histograms do fit the GPU, however, the method of Section 4

seems to achieve a significant speedup over existing implementations, so that in many cases a few tens or even a few hundred iterations seem possible in reasonable time. Also, by not needing to store intermediate results, as relying on autograd implementations of frameworks such as PyTorch, it seems much more memory-efficient to use the Lagrange multiplier. Also, saving the computational cost of backpropagation, which is roughly equivalent to that of the forward pass, allows the number of iterations to be doubled within the same computational budget. As such we disagree with the assessment in

[4], which is also cited in a recent blog entry [3] with implementation.

The latter is particularly important for memory-efficiency because backpropagation though the iteration typically stores intermediate results for each step to facilitate backward computation. This is particularly important because GPU memory is typically an even scarcer resource than computation time in depp learning applications. In our measurement, we achieve a total speedup in forward and backward of 6.5x over [3]’s implementation for distributions with mass at 100 points each, even though our choice to not use early stopping causes us compute 3x as many iterations. A significant part of the advantage is that our backward comes at almost negligible computational cost, the remainder from the efficient computational implementation.

Our code is available at https://github.com/t-vi/pytorch-tvmisc/blob/master/wasserstein-distance/Pytorch_Wasserstein.ipynb.