We describe Ccluster, a software for computing natural ϵ-clusters of complex roots in a given box of the complex plane. This algorithm from Becker et al. (2016) is near-optimal when applied to the benchmark problem of isolating all complex roots of an integer polynomial. It is one of the first implementations (Irina Voiculescu informed us that her student Dan-Andrei Gheorghe has independently implemented the same algorithm in a Masters Thesis Project (May 18, 2017) at Oxford University. Sewon Park and Martin Ziegler at KAIST, Korea, have implemented a modified version of Becker et al.(2016) for polynomials having only real roots being the eigenvalues of symmetric square matrices with real coefficients) of a near-optimal algorithm for complex roots. We describe some low level techniques for speeding up the algorithm. Its performance is compared with the well-known MPSolve library and Maple. 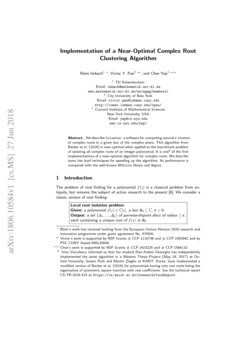 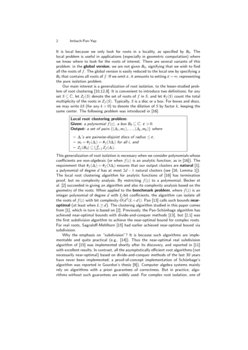 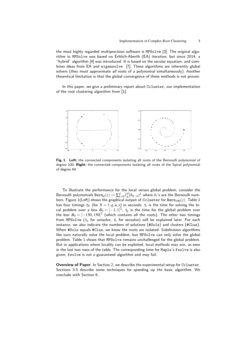 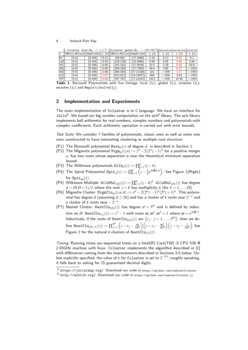 The problem of root finding for a polynomial f(z) is a classical problem from antiquity, but remains the subject of active research to the present [6]. We consider a classic version of root finding:

It is local because we only look for roots in a locality, as specified by B0. The local problem is useful in applications (especially in geometric computation) where we know where to look for the roots of interest. There are several variants of this problem: in the global version, we are not given B0, signifying that we wish to find all the roots of f. The global version is easily reduced to the local one by specifying a B0 that contains all roots of f. If we omit ε, it amounts to setting ε=∞, representing the pure isolation problem.

Our main interest is a generalization of root isolation, to the lesser-studied problem of root clustering [10, 12, 8]. It is convenient to introduce two definitions: for any set S⊆C, let Zf(S) denote the set of roots of f in S, and let #f(S) count the total multiplicity of the roots in Zf(S). Typically, S is a disc or a box. For boxes and discs, we may write kS (for any k>0) to denote the dilation of S by factor k, keeping the same center. The following problem was introduced in [16]:

This generalization of root isolation is necessary when we consider polynomials whose coefficients are non-algebraic (or when f(z) is an analytic function, as in [16]). The requirement that #f(Δi)=#f(3Δi) ensures that our output clusters are natural [1]; a polynomial of degree d has at most 2d−1 natural clusters (see [16, Lemma 1]). The local root clustering algorithm for analytic functions of [16] has termination proof, but no complexity analysis. By restricting f(z) to a polymomial, Becker et al. [2] succeeded in giving an algorithm and also its complexity analysis based on the geometry of the roots. When applied to the benchmark problem, where f(z) is an integer polynomial of degree d with L-bit coefficients, the algorithm can isolate all the roots of f(z) with bit complexity ˜O(d2(L+d)). Pan [13] calls such bounds near-optimal (at least when L≥d). The clustering algorithm studied in this paper comes from [1], which in turn is based on [2]. Previously, the Pan-Schönhage algorithm has achieved near-optimal bounds with divide-and-conquer methods [13], but [2, 1] was the first subdivision algorithm to achieve the near-optimal bound for complex roots. For real roots, Sagraloff-Mehlhorn [15] had earlier achieved near-optimal bound via subdivision.

Why the emphasis on “subdivision”? It is because such algorithms are implementable and quite practical (e.g., [14]). Thus the near-optimal real subdivision algorithm of [15] was implemented shortly after its discovery, and reported in [11] with excellent results. In contrast, all the asymptotically efficient root algorithms (not necessarily near-optimal) based on divide-and-conquer methods of the last 30 years have never been implemented; a proof-of-concept implementation of Schönhage’s algorithm was reported in Gourdon’s thesis [9]). Computer algebra systems mainly rely on algorithms with a priori guarantees of correctness. But in practice, algorithms without such guarantees are widely used. For complex root isolation, one of the most highly regarded multiprecision software is MPSolve [3]. The original algorithm in MPSolve was based on Erhlich-Aberth (EA) iteration; but since 2014, a “hybrid” algorithm [4] was introduced. It is based on the secular equation, and combines ideas from EA and eigensolve  [7]. These algorithms are inherently global solvers (they must approximate all roots of a polynomial simultaneously). Another theoretical limitation is that the global convergence of these methods is not proven.

In this paper, we give a preliminary report about Ccluster, our implementation of the root clustering algorithm from [1].

To illustrate the performance for the local versus global problem, consider the Bernoulli polynomials \tt Bernd(z):=∑dk=0(dk)bd−kzk where bi’s are the Bernoulli numbers. Figure 1(Left) shows the graphical output of Ccluster for \tt Bern100(z). Table 1 has four timings τX (for X=ℓ,g,u,s) in seconds: τℓ is the time for solving the local problem over a box B0=[−1,1]2; τg is the time for the global problem over the box B0=[−150,150]2 (which contains all the roots). The other two timings from MPSolve (τu for unisolve, τs for secsolve) will be explained later. For each instance, we also indicate the numbers of solutions (#Sols) and clusters (#Clus). When #Sols equals #Clus, we know the roots are isolated. Subdivision algorithms like ours naturally solve the local problem, but MPSolve can only solve the global problem. Table 1 shows that MPSolve remains unchallenged for the global problem. But in applications where locality can be exploited, local methods may win, as seen in the last two rows of the table. The corresponding time for Maple’s fsolve is also given; fsolve is not a guaranteed algorithm and may fail.

Overview of Paper In Section 2, we describe the experimental setup for Ccluster. Sections 3-5 describe some techniques for speeding up the basic algorithm. We conclude with Section 6.

The main implementation of Ccluster is in C language. We have an interface for Julia222https://julialang.org/. Download our code in https://github.com/rimbach/Ccluster. . We based our big number computation on the arb333http://arblib.org/. Download our code in https://github.com/rimbach/Ccluster.jl. library. The arb library implements ball arithmetic for real numbers, complex numbers and polynomials with complex coefficients. Each arithmetic operation is carried out with error bounds.

We consider 7 families of polynomials, classic ones as well as some new ones constructed to have interesting clustering or multiple root structure.

Running times are sequential times on a Intel(R) Core(TM) i3 CPU 530 @ 2.93GHz machine with linux. Ccluster implements the algorithm described in [1] with differences coming from the improvements described in Sections 3-5 below. Unless explicitly specified, the value of ϵ for Ccluster is set to 2−53; roughly speaking, it falls back to asking for 15 guaranteed decimal digits.

For external comparison, we use MPSolve. It was shown to be superior to major software such as Maple or Mathematica [3]. There are two root solvers in MPSolve: the original unisolve [3] which is based on the Ehrlich-Aberth iteration and the new hybrid algorithm called secsolve [4]. These are called with the commands mpsolve -au -Gi -oγ -j1 and mpsolve -as -Gi -oγ -j1 (respectively). -Gi means that MPSolve tries to find for each root a unique complex disc containing it, such that Newton iteration is guaranteed to converge quadratically toward the root starting from the center of the disc. -oγ means that 10−γ is used as an escape bound, i.e., the algorithm stops when the complex disc containing the root has radius less that 10−γ, regardless of whether it is isolating or not. Unless explicitly specified, we set γ=16. -j1 means that the process is not parallelized. Although MPSolve does not do general local search, it has an option to search only within the unit disc. This option does not seem to lead to much improvement.

The key predicate in [1] is a form of Pellet test denoted ˜TGk(Δ,k) (with implicit f(z)). This is modified in Figure 3 by adding an outer while-loop to control the number of Graeffe-Dandelin iterations. We try to get a definite decision (i.e., anything other than a unresolved) from the soft comparison for the current Graeffe iteration. This is done by increasing the precision L for approximating the coefficients of ~f in the innermost while-loop. Thus we have two versions of our algorithm: (V1) uses the original ˜TGk(Δ,k) in [1], and (V2) uses the modified form in Figure 3. Let τV1 and τV2 be timings for the 2 versions. Table 2 shows the time τV1 (in seconds) and the ratio τV1/τV2. We see that (V2) achieves a consistent 2.3 to 3-fold speed up.

In (V2), as in [1], we use ˜TG0(Δ) (defined as ˜TGk(Δ,0)) to prove that a box B has no root. We propose a new version (V3) that uses ˜TG∗(Δ) (defined as ˜TGk(Δ,d), where d is the degree of f) instead of ˜TG0(Δ) to achieve this goal: instead of just showing that B has no root, it upper bounds #f(B). Although counter-intuitive, this yields a substantial improvement because it led to fewer Graeffe iterations overall. The timing for (V3) is τV3, but we display only the ratio τV1/τV3 in the last column of Table 2. This ratio shows that (V3) enjoys a 3.3-7.7 fold speedup. Comparing n3 for (V2) and (V3) explains this speedup.

A technique for speeding up the evaluation of predicates is the idea of filters (e.g., [5]). The various Pellet tests can be viewed as a box predicate C that maps a box B⊆C to a value555 We treat two-valued predicates for simplicity; the discussion could be extended to predicates (like ˜TG∗) which returns a finite set of values. in {\bf true,\bf false}. If C− is another box predicate with property that C−(B)=\bf false implies C(B)=\bf false, we call C− a falsehood filter. If C− is efficient relatively to C, and “efficacious” (informally, C(B)=\bf false is likely to yield C−(B)=\bf false), then it is useful to first compute C−(B). If C−(B)=\bf false, we do not need to compute C(B). The predicate C0 used in Ccluster  is defined as follows: C0(B) is true if ˜TG∗(ΔB) returns 0 (then B contains no root of f) and is false if ˜TG∗(ΔB) returns −1 or k>0 (then B may contain some roots of f). We next present the falsehood filter C−0(B) for C0.

Our C−0 filter takes as input a precision L, the Taylor shift fΔ of the L bit approximation of f and its i-th Graeffe iteration f[i]Δ such that 2N−i≤d4 and 2N−(i+1)>d4. It computes |f[N]Δ|0, |f[N]Δ|d and the 2N−j+1 first coefficients of f[j]Δ for i<j≤N with eq. (1). Then it checks the hypothesis of (A) using IntCompare, and returns false if it is verified, and true otherwise. In practice, it is implemented within the procedure implementing ˜TG∗(ΔB).

Incorporating C−0 into Version (V3), we obtain (V4) and the speed up can be seen in Table 3. Filtering with C−0 becomes more effective as degree grows and this is because one has 2N−i≤d4 for smaller i (recall that N=4+⌈log2(1+log2(d))⌉).

The ϵ parameter is usually understood as the precision desired for roots. But we can also view it as an escape bound for multiple roots as follows: we do not refine a disc that contains a simple root, even if its radius is ≥ϵ. But for clusters of size greater than one, we only stop when the radius is <ϵ. MPSolve has a similar option. This variant of (V4) is denoted (V4’). We see from Table 4 that (V4’) gives a modest improvement (up to 25% speedup) over (V4) when −logϵ=53. This improvement generally grows with −logϵ (but \tt WilkMul(11)(z) shows no difference).

Implementing subdivision algorithms is relatively easy but achieving state-of-art performance requires much optimization and low-level development. This paper explores several such techniques. We do well compared to fsolve in Maple, but the performance of MPSolve is superior to the global version of Ccluster. But Ccluster can still shine when looking for local roots or when ε is large.