Zero-shot learning (ZSL) which aims to recognize unseen classes with no labeled training sample, efficiently tackles the problem of missing labeled data in image retrieval. Nowadays there are mainly two types of popular methods for ZSL to recognize images of unseen classes: probabilistic reasoning and feature projection. Different from these existing types of methods, we propose a new method: sample construction to deal with the problem of ZSL. Our proposed method, called Imagination Based Sample Construction (IBSC), innovatively constructs image samples of target classes in feature space by mimicking human associative cognition process. Based on an association between attribute and feature, target samples are constructed from different parts of various samples. Furthermore, dissimilarity representation is employed to select high-quality constructed samples which are used as labeled data to train a specific classifier for those unseen classes. In this way, zero-shot learning is turned into a supervised learning problem. As far as we know, it is the first work to construct samples for ZSL thus, our work is viewed as a baseline for future sample construction methods. Experiments on four benchmark datasets show the superiority of our proposed method. 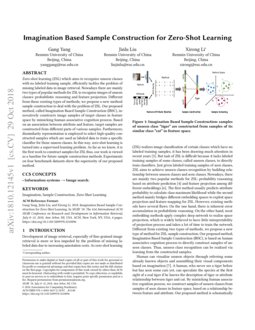 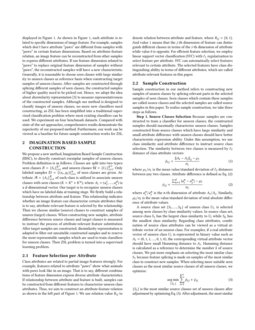 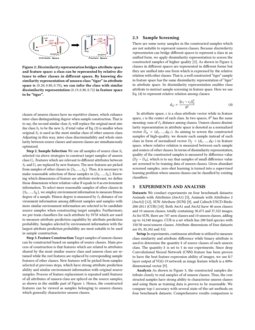 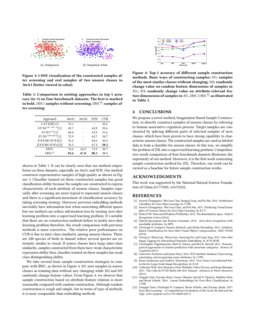 Development of image retrieval, especially of fine-grained image retrieval is more or less impeded by the problem of missing labeled data due to increasing annotation costs. As zero-shot learning (ZSL) realizes image classification of certain classes which have no labeled training samples, it has been drawing much attention in recent years (Lampert et al., 2014)

(Jayaraman and Grauman, 2014) and feature projection among different embeddings (Li et al., 2015). The first method usually predicts attribute probability to calculate class maximum likelihood while the second method mainly bridges different embedding spaces to exploit space projection and feature mapping for ZSL. However, existing methods have several flaws. On the one hand, there is inherent error accumulation in probabilistic reasoning. On the other hand, most embedding methods apply complex deep network to realize space projection, which is widely believed to have little interpretability of projection process and takes a lot of time to train the network. Different from existing two types of methods, we propose a new type of method for ZSL: sample construction. Our proposed method, Imagination Based Sample Construction (IBSC), is based on human associative cognition process to directly construct samples of unseen classes. Thus, unseen class recognition can be realized via learning from the constructed samples.

Human can visualize unseen objects through referring some already known objects and assembling their visual components based on imagination (Papadopoulos et al., 2011). A human, who never see a tiger before but has seen some cats yet, can speculate the species at the first sight of a real tiger if he knows the description of tiger or attribute relationship between tiger and cat. By mimicking human associative cognition process, we construct samples of unseen classes from samples of seen classes in feature space, based on a relationship between feature and attribute. Our proposed method is schematically displayed in Figure 1. As shown in Figure 1, each attribute is related to specific dimensions of image feature. For example, samples which don’t have attribute “paws” are different from samples with “paws” in certain feature dimensions. Based on attribute-feature relation, an image feature can be reconstructed from other samples to express different attributes. If use feature dimension related to “paws” to replace original feature dimension of samples without “paws”, the reconstructed samples will have a new characteristic. Generally, it is reasonable to choose seen classes with large similarity to unseen classes as reference basis when constructing target samples of unseen classes. After samples are constructed through splicing different samples of seen classes, the constructed samples of higher quality need to be picked out. Hence, we adopt the idea about dissimilarity representation (Duin and Pękalska, 2012) to measure representativeness of the constructed samples. Although our method is designed to classify images of unseen classes, no more new classifiers need constructing, as ZSL has been simplified into a traditional supervised classification problem where most existing classifiers can be used. We experiment on four benchmark datasets. Compared with state-of-the-art approaches, comprehensive results demonstrate the superiority of our proposed method. Furthermore, our work can be viewed as a baseline for future sample construction works for ZSL.

We propose a new method, Imagination Based Sample Construction (IBSC), to directly construct exemplar samples of unseen classes. Problem definition is as follows. Classes are split into two types: seen classes S={Si}Ksi=1 and unseen classes U={Ui}Kui=1. Only labeled samples D={(xi,yi)}ni=1 of seen classes are given. Attribute A={Ai}Ki=1 of each class is utilized to associate unseen classes with seen classes (K=Ks+Ku), where Ai=(a1i,...,adi) is a d

-dimensional vector. Our target is to recognize unseen classes which have no labeled data at training stage. We firstly build a relationship between attribute and feature. This relationship indicates whether an image feature can characterize certain attributes that is to say, attribute-relevant feature is selected by the relationship. Then we choose similar (source) classes to construct samples of unseen (target) classes. When constructing new samples, attribute difference between source classes and target classes is measured to instruct the process of attribute-relevant feature substitution. After target samples are constructed, dissimilarity representation is adopted to filter out unsuitable constructed samples and to reserve the most representable samples which are used to train classifiers for unseen classes. Then ZSL problem is turned into a supervised learning problem.

Class attributes are related to partial image features strongly. For example, features related to attribute “paws” show what animals with paws look like in an image. That is to say, different combinations of feature dimension express diverse attribute characteristics. If relationship between attribute and feature is built, samples can be constructed from different features to characterize unseen class attributes. Thus, we aim to construct an attribute-feature relation as shown in the left part of Figure 1. We use relation value Rij to denote relation between attribute and feature, where Rij={0,1}. And value 1 means that the j-th dimension of feature can distinguish different classes in terms of the i-th dimension of attribute while value 0

is opposite. For efficient feature selection, we employ linear support vector classification (SVC) with

ℓ1 regularization to select feature per attribute. SVC can automatically select features relevant to certain attribute. The selected features have class distinguishing ability in terms of different attributes, which are called attribute-relevant features in this paper.

is the mean value/standard deviation of

ℓ2 distances between any two classes. Attribute difference is defined as Eq. (2):

where ani/anj is the n-th dimension of attribute Ai/Aj. Similarly, μ2/σ2 is the mean value/standard deviation of total absolute difference of attribute values.

Step 3. Feature Construction Target samples of unseen classes can be constructed based on samples of source classes. Main process of construction is that features which are related to attributes shared by the most similar source class and unseen class are retained while the rest features are replaced by corresponding sample features of other classes. New features will be picked from samples selected at previous steps, which have strong attribute prediction ability and similar environment information with original source samples. Process of feature replacement is repeated until features of all attributes of unseen class are spliced on the source samples, as shown in the middle part of Figure 1. Hence, the constructed features can be viewed as samples belonging to unseen classes, which generally characterize unseen classes.

In attribute space, c is a class attribute vector while in feature space, c is the center of each class. In two spaces, θ2 has the same meaning: sum of ℓ2 distance among classes. Unseen classes dissimilarity representation in attribute space is denoted as a normalized vector Da=(d1,...,dKs). As aiming to screen the constructed samples of high-quality, we denote each sample instead of each class in form of normalized vector Df=(d1,...,dKs) in feature space, where relative relation is measured between each sample and centers of other classes. In terms of dissimilarity representation, quality of the constructed samples is measured by difference value |Df−Da|, which is to say that samples of small difference value are screened to be training data of unseen classes. Given abundant screened samples, zero-shot learning is turned into a supervised learning problem where unseen classes can be classified by existing classifiers.

is set to 5 in our experiments. Since deep Convolutional Neural Network (CNN) feature has been proven to have the best feature expression ability of images, we use fc7 layer output of VGG-19 network as image feature which is a 4096-dimensional vector

Analysis As shown in Figure 3, the constructed samples distribute closely to real samples of of unseen classes. Thus, the constructed samples have strong ability to characterize unseen classes and using them as training data is proven to be reasonable. We compare top-1 accuracy with several state-of-the-art methods on four benchmark datasets. Comprehensive results comparison is shown in Table 1. It can be clearly seen that our method outperforms on three datasets, especially on AwA1 and SUN. Our method constructs representative samples of high quality as shown in Figure 3. Classifier trained on these constructed samples has good classification ability because the samples are constructed to express characteristic of each attribute of unseen classes. Samples especially after screening are more typical to represent unseen classes and there is a significant increment of classification accuracy by taking screening strategy. Moreover, previous embedding methods inevitably have information loss when associating different spaces but our method can reduce information loss by turning zero-shot learning problem into a supervised learning problem. It’s notable that there are no construction methods before to tackle zero-shot learning problem therefore, the result comparison with previous methods is more convictive.

The relative poor performance on CUB is due to inter-class similarity among unseen classes. There are 200 species of birds in dataset where several species are extremely similar in visual. If source classes have large inter-class similarity, samples constructed from them have weak characteristic expression ability thus, classifier trained on these samples has weak class distinguishing ability.

We propose a novel method, Imagination Based Sample Construction, to directly construct samples of unseen classes by referring to human associative cognition process. Target samples are constructed by splicing different parts of selected samples of seen classes, which have been proven to have strong capability to characterize unseen classes. The constructed samples are used as labeled data to train a classifier for unseen classes. In this way, we simplify the problem of ZSL into a supervised learning problem. Comprehensive result comparison of four benchmark datasets illustrates the superiority of our method. Moreover, it is the first work concerning sample construction method for ZSL. Therefore, our work can be viewed as a baseline for future sample construction works.