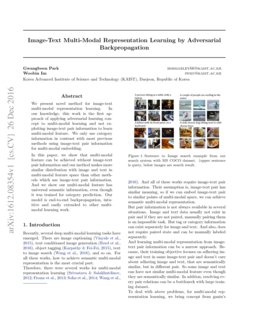 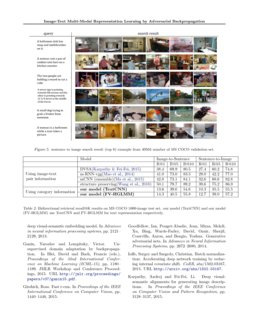 Embed Everything: A Method for Efficiently Co-Embedding Multi-Modal Spaces

Many previous approaches use ranking loss (the training objective is minimizing distance of same image-text pair and maximizing distance of different image-text pair in multi-modal space) for multi-modal embedding. Karpathy’s work(Karpathy & Fei-Fei, 2015) use R-CNN(Girshick, 2015) for image feature and BRNN(Schuster & Paliwal, 1997) for text feature and apply ranking loss. And Some approaches ((Frome et al., 2013),(Wang et al., 2016)) use VGG-net for image feature extracting and use neural-language-model for text feature extracting and apply ranking loss or triplet ranking loss. Some other approaches use deep generative model(Sohn et al., 2014)

(Srivastava & Salakhutdinov, 2012) for multi-modal representation learning. In these methods, they intentionally miss one modality feature and generate missed feature from other modality feature to learn relation of different modalities. Therefore they also use image-text pair information and the process is complicate and not intuitive.

Covariate shift is a primary assumption for domain adaptation field, which assumes that source domain and target domain have same labelling function (same semantic feature or information) but mathematically different distribution form. There was theoretical work about domain adaptation within covariate shift relation source and target domain(Adel & Wong, 2015). And we assume that image and text are also in covariate shift relation. We assume image and text have same semantic information (labeling function) but have different distribution form. So our multi-modal embedding process is adapting those distributions as same and retain semantic information at the same time.

Our network structure (Figure 2) is divided into two parts: feature extraction and multi-modal representation learning. The former part aims at transforming each modality signal into feature. The latter part is devised to embed each feature representation into single (multi-modal) space. For the representation of visual features, we use VGG16 (Simonyan & Zisserman, 2014)

which is pre-trained on ImageNet

(Deng et al., 2009). To extract image features, we re-size an image to the size 255×255 and crop 224×224 patches from the four corners and the center. Then the 5 cropped area are flipped to get total 10 patches. We extract fully-connected features (FC7) from each patch, and average them to get a single feature. To represent sentences, we use Word2Vec (Mikolov et al., 2013)

. We add zero padding to the bottom row of the feature to fix its size. Since the maximum length of a sentence in MS COCO dataset

(Lin et al., 2014) is 59, we set the feature size to 59×300. After extracting features from each modality, the multi-modal representation learning process follows. For an image feature X∈IR4096 and a sentence feature Y∈IR59×300, we apply two transformations fimg and fsent for images and sentences respectively, to embed two features into a single D-dimensional space. That is, fimg(X)∈IRD and fsent(Y)∈IRD are satisfied. For embedding image feature X∈IR4096

, we use two fully connected layers with ReLU

to be embedded in the space. At the end of each feature embedding network, we use batch-normalization

(Ioffe & Szegedy, 2015) and L2-normalization respectively. And we apply dropout(Srivastava et al., 2014) for all fully-connected layers. The embedding process is regulated by two components – category predictor and domain classifier with gradient reversal layer, which is a similar concept to that of (Ganin & Lempitsky, 2015). The category predictor regulates the features on the multi-modal space, in such a way that multi-modal features are discriminative enough to be classified into the valid categories. Meanwhile, the domain classifier with gradient reversal layer makes the multi-modal features being invariant to their domain.

We adopt the concept from (Ganin & Lempitsky, 2015). GRL (Gradient Reversal Layer) is a layer in which backward pass is reversing gradient values. For a layer’s input X, the output Y

, and the identity matrix

The domain classifier is a simple neural network that has two fully-connected layers, with the last sigmoid layer that determines the domain of features in the multi-modal embedding space. That is, it is trained in a way that it discriminates the difference between features from two domains.

where Lc and Ld is the error of category predictor and domain classifier respectively, Y is the output of the last feature embedding layer, and λ is the adaptation factor. We use Adam optimizer (Kingma & Ba, 2014) for training with relatively small learning rate 10−5. That’s because of the empirical difficulty of generating domain-invariant features with regular learning rate.

To achieve domain invariant feature, we use domain classifier and gradient reversal layer (Ganin & Lempitsky, 2015). And we should properly schedule λ (adaptation factor) value from 0 to some positive value. Because, at the first stage of training, domain classifier should become smart in advance for adversarial learning process. And with λ value increasing, domain classifying with multi-modal feature become difficult and domain classifier become smarter to classify it correctly. In our experiment, it turns out that proper λ scheduling is important to achieve domain invariant feature. After exploring many scheduling methods, we find below schedule scheme is optimal, which is exactly the same scheduling as (Ganin & Lempitsky, 2015). In the equation, p is the fraction of current step in max training steps.

We used batch normalization(Ioffe & Szegedy, 2015) and L2-normalization for normalizing image and text feature distribution just before the multi-modal feature layer. In our experiment, without proper normalization, it seems to be trained well (loss value decreases gently and classification accuracy is fine) but when checking the t-SNE(Van Der Maaten, 2014) embedding and search result, we can recognize that image and text feature distribution is collapsed just for achieving domain invariant feature (collapsed means distance between features going to zero). So proper normalization process is important to achieve domain invariant and also well distributed multi-modal feature.

For benchmark of search system, we did recall@K evaluation (table 2, next page) with sentence-to-image and image-to-sentence retrieval. For this, we used karpathy’s data split scheme(Karpathy & Fei-Fei, 2015). Compare to state-of-the-art results, our model’s performance is relatively low. We think, the major reason is, previous models trained for adhering image-text pair and pushing different image-text pair in multi-modal space and recall@K evaluate query’s pair appeared or not in retrieval result. So, even if search result is semantically reasonable (figure 5), if query’s pair not appear in retrieval result, recall@K can be low. So we think, this metric is not fully appropriate to assess search quality. But for comparison, we also did recall@K experiment.

We have proposed a novel approach for multi-modal representation learning which uses adversarial backpropagation concept. Our method does not require image-text pair information for multi-modal embedding but only uses category label. In contrast, until now almost all other methods exploit image-text pair information to learn semantic relation between image and text feature. Our work can be easily extended to other multi-modal representation learning (e.g. sound-image, sound-text, video-text). So our method’s future work will be extending this method to other multi-modal case.