Image Super-Resolution Based on Sparsity Prior via Smoothed l_0 Norm 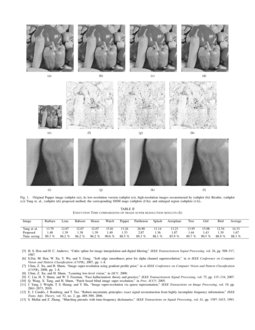 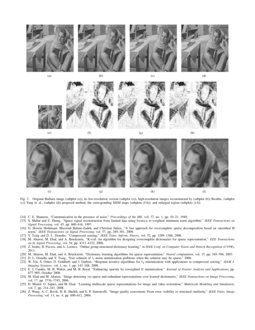 The most typical super-resolution methods require multiple low-resolution images, with sub-pixel accuracy alignment. In this approach super-resolution can be considered as an inverse problem, where it is essential to assume a prior on the solution to regularize the ill-posed nature of the problem and avoid infinitely many solutions [3, 4].

[6, 7] try to avoid this problem by exploiting natural image priors, they are often limited in accounting for the complexity of images which have regions with fine textures or smooth shadings. As a result, watercolor-like artifacts are often observed in some regions.

Sparse representation of a vector over a known dictionary is an ill-posed, combinatorial optimization problem

[12]. Several relaxation approaches have been used to convexify this problem. The most common approaches are Matching Pursuit (MP)[13], Basis Pursuit (BP) [14], and Focal Underdetermined System Solution (FOCUSS) [15]. In this paper, we adopt a recently proposed Smoothed l0-norm (SL)) algorithm [16], a faster solver for sparse representation, to lessen the computational load and to improve the quality of the reconstructed high-resolution image.

The rest of the paper is organized as follows. In section II, we briefly present the approach that is used to decompose a signal on an overcomplete dictionary. Section III is devoted to the super-resolution algorithm and its alternation. Section VI summarizes experimental results. The paper is finally concluded in section V.

Finding the sparsest representation of a source signal over an overcomplete dictionary is formulated under the topic of compressed sensing (CS) theory [12, 17]. Let x∈Rn be the source signal, and D∈Rm×n the dictionary (n>m). Our goal is to find the sparsest solution of the following linear system:

where α∈(R)m. The recovery of α from x based on (1) is impossible to implement in a unique and stable way, unless it is known that α is sparse enough to have a relatively low value of ∥α∥0 [12]. This assumption is only valid if the dictionary is chosen or learned properly. Several algorithms have been provided to design such dictionaries [18, 19, 20].

Equivalently (1) can be formulated as the following optimization problem:

Due to the highly nonconvex nature of l0-norm, this problem is ill-posed and intractable. In conventional CS theory [12, 17] it is proven that if the dictionary D satisfies the restricted isometry property (RIP) [12, 17] with respect to a certain class of sparse signals to which α is assumed to belong, then α can be recovered as a solution to [21, 22]

which is a convex minimization problem. It is straightforward to reformulate this equivalent problem in terms of linear programming. This approach results in a tractable problem but is still time-consuming for large scale systems. It is also important to note that the equivalence between

l0-norm and l1-norm is only valid asymptotically and does not always hold [23]. In a different approach, the l0-norm is approximated directly by a smooth convex function [16]. This approach has proved to be faster with possibility of resulting in sparser representation [16].

Consider the smooth function, fσ(x)=e−x2/σ2. As σ approaches zero, we have the following equivalence:

This equivalence does not help us in practice. However, one can assume that if σ is set to be nonzero and sufficiently small then we can approximate the l0-norm of a vector by

This enables us to approximate the l0-norm with a smooth, differentiable function. This is the key fact that enables us to replace the l0-norm minimization with a convex problem, so that we can take advantage of common techniques, such as steepest descent, to tackle the optimization problem. The value of σ controls the trade-off between the closeness to the l0-norm and the smoothness of the approximation. Now if we define Fσ(x)=∑ni=0fσ(xi), then the minimization of ∥x∥0 can be done by maximizing Fσ by choosing a proper value for σ. Due to the nonconvex nature of the l0-norm, Fσ will archive a lot of local extreme points for small values of σ. Consequently, finding the global maxima will become difficult. On the other hand, if the value of σ is chosen to be sufficiently large, there will be no local maxima [16] and asymptotically the solution for σ=∞ is equivalent to the l2-norm solution. Considering these facts, the authors of [16] provided Algorithm 1 to solve the optimization problem P0.

Here, the final estimation of each step is used for the initialization of the next steepest ascent. By a proper selection of the sequence of σ, we may avoid being trapped in the local maxima. Compared to conventional CS solvers, this algorithms proves to be faster with the possibility of recovering a sparser solution [16].

Sparse representation has been applied to multiple inverse problems in image processing such as denoising [24], restoration [25] and super-resolution [11, 4]. Generally sparsity is used as a prior on source signal to avoid ill-posed nature of inverse problems. In such applications, there exist a stage, which involves expansion of a source signal over an overcomplete dictionary, sparsely. The output quality of these algorithms depends on the accuracy in finding the sparse representation. In this section, SL0 algorithm is employed in a super-resolution algorithm to improve quality of the output high-resolution image.

where H represents a blurring matrix, and S is a downsampling matrix. The recovered high-resolution output image must be consistent with the low-resolution input image. This problem is highly ill-posed and infinitely many solutions satisfy (6) and are consistent with low-resolution image. To provide a unique solution, local sparsity model maybe applied as a prior. We assume that there exist two dictionaries, Dl and Dh, for which each patch of low, y, and high, x, resolution images can be represented sparsely simultaneously and jointly as follows:

where Rij is a matrix that extracts the (ij) block from the image, Dl∈Rm×n is the dictionary with n>m, λ is the regularization parameter, X0 is the image obtained by averaging the blocks obtained using sparse representation, and αij is the sparse vector of coefficients corresponding to the (ij) block of the image. Here, (8) refers to the sparse coding of local image patches with bounded prior, hence building a local model from sparse representations. On the other hand, (9) demands the proximity between the low-resolution image, Y, and the output image X, thus enforcing the global reconstruction constraint. In [11], l1-norm minimization is used to solve (8) , whereas we use SL0 algorithm to solve this stage. The solution to (9) can be done iteratively using a gradient descent algorithm as follows:

where Xt is the estimation of the high-resolution image after the t-th iteration, and ν is the step size.

The proposed image super-resolution algorithm is summarized in Algorithm 2.

Compared to the original algorithm in [11], reduction in the computational complexity and the possibility of improving the output quality are expected.

In this section we compare the proposed super-resolution algorithm with bicubic interpolation and the method given in [11]. The image super resolution methods are tested on various images. To be consistent with [11], patches of 5×5 pixels were used on the low resolution image and the scaling factor was set to 2. Each patch is converted to a vector with length 25. The trained dictionaries, provided by authors of [11], with the sizes of 25×1024 and 100×1024 for the low and the high resolution dictionaries were used, respectively. To remove artifacts on the patch boundaries we set a overlap of one pixel in the patches.

Fig. 1 and Fig. 2 (subplots (a) and (e)) depict the original Pepper and Barbara images and their corresponding low-resolution versions. In the same figures subplots (b-d) depict reconstructed high-resolution images using the proposed methods. Subplots (f-h) depict the corresponding SSIM maps [26]. A close look on the reconstructed images, enlarged image regions (subplots (i-l)), and the corresponding SSIM maps shows that while bicubic method works pretty well in smooth regions, significant blurring occurs on edges. The method of [11] is able to recover the edges better but does not work as well in smooth regions. Compared to [11] our approach is able to recover the edges and meanwhile it works better in smooth regions. One possible approach for further improving the image quality might be using a combination of bicubic and our approach. The quantitative results for different images reconstructed from different algorithms are shown in Table 1.

All the high-resolution output images have been compared with their original counterparts in terms of PSNR as well as of the structural similarity index (SSIM) of [26], which is believed to be a better indicator of perceptual image quality [27]. It can be observed that the proposed method outperforms the other methods in terms of both SSIM and PSNR in most cases and on average it outperforms both methods.

In this paper, we attempt to take advantage of the SL0 sparse coding solver in order to improve one of the-state-of-the-art single input image super-resolution algorithms based on sparse signal representation. Compared with the method in [11], our approach significantly reduces computational complexity, and yet improves the output perceptual quality. Our simulations demonstrate the potential of the SL0 algorithm in improving the current image processing algorithms that use sparse coding in one of their stages. In the future, the algorithm maybe further improved by advanced design of the dictionary.

This work was supported in part by the Natural Sciences and Engineering Research Council of Canada and in part by Ontario Early Researcher Award program, which are gratefully acknowledged. The authors would also like to acknowledge Jianchao Yang for providing super-resolution codes.