The existing segmentation techniques require high-fidelity images as input to perform semantic segmentation. Since the segmentation results contain most of edge information that is much less than the acquired images, the throughput gap leads to both hardware and software waste. In this letter, we report an image-free single-pixel segmentation technique. The technique combines structured illumination and single-pixel detection together, to efficiently samples and multiplexes scene's segmentation information into compressed one-dimensional measurements. The illumination patterns are optimized together with the subsequent reconstruction neural network, which directly infers segmentation maps from the single-pixel measurements. The end-to-end encoding-and-decoding learning framework enables optimized illumination with corresponding network, which provides both high acquisition and segmentation efficiency. Both simulation and experimental results validate that accurate segmentation can be achieved using two-order-of-magnitude less input data. When the sampling ratio is 1 accuracy reaches above 96 technique can be widely applied in various resource-limited platforms such as UAV and unmanned vehicle that require real-time sensing. 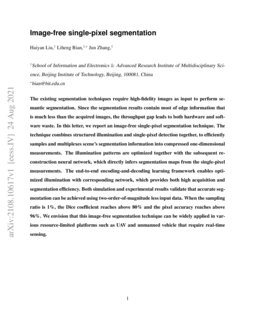 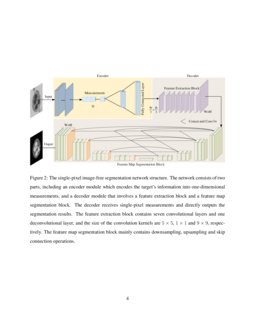 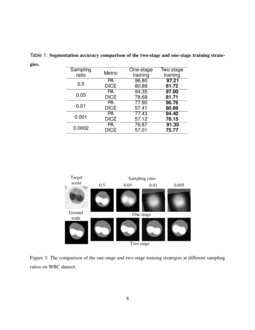 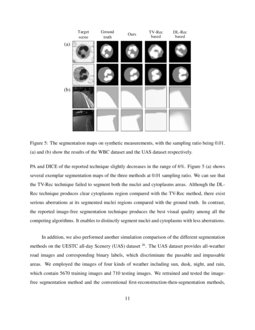 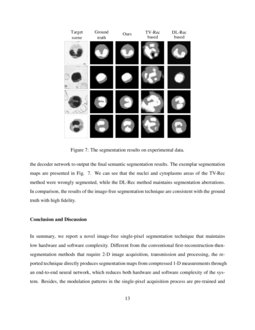 To further improve modulation and sensing efficiency, we built an end-to-end deep learning framework to simultaneously optimize the modulation patterns and the corresponding inferring network, as shown in Fig. 2. It consists of two parts. The first part is an encoder module that modulates and couples the target light field into one-dimensional measurements. The second part is a decoder module that infers segmentation information from the non-visual measurements.

The encoder contains one convolution layer, in which the kernels represent the modulation patterns. The convolutional filters maintain the same size with the the target scene I(x,y) (64×64 in this work). The i-th single-pixel measurement Si is mathematically modeled as

where Gi(x,y) represents the i-th modulation pattern, and ⊙ denotes the Hadamard product. After the encoder outputs the one-dimensional measurements (1×1×N), we added a full connected layer to extract more connotative semantic information. As a result, the data dimension was increased to 1×1×1024, and then adjusted into a feature map of 1×32×32 to input into the subsequent decoder.

With the input of a 32×32 feature map produced by the encoder, the decoder outputs a 64×64

segmentation map. The decoder is comprised of two parts. The first part is a feature extraction block designed based on the Fast Super-Resolution Convolutional Neural Network (FSRCNN)

[17], which includes five steps of feature extraction, shrinking, mapping, expanding and deconvolution. The feature extraction step utilizes 56 5×5 filters to first perform feature extraction on the input feature map. Then, the shrinking step adopts a smaller number of filters to reduce parameters and simplify the model, during which the feature dimension is reduced from 56 to 12. Next, the non-linear mapping part of 4 convolution layers of 3×3 maps fuzzy features into clear features without changing feature map channels. Further, the expansion step adopts 1×1 filters to extend the dimensions of the mapped high-resolution feature map and the number of channels back to 56, which is conducive to the reconstruction of a clearer segmentation map. Finally, the deconvolution step upsamples and aggregates the features using a set of deconvolution filters.

Due to the lack of large-scale segmentation datasets, direct training of the reported network results in low segmentation accuracy (as validated in Fig. 3

). Considering that large-scale natural image datasets are available, we derived a two-stage training strategy that intrinsically corresponds to the transfer learning theory

[19]. In the first training stage, we apply large-scale natural image datasets to learn image-related prior features, by controlling that the gradient flow only goes back through the encoder and the feature extraction block. This helps better extract target features and improve sensing performance. In the second training stage, the gradient flow goes back through the entire network, namely that both the encoder and the decoder are updated at the same time. This operation transfers the learned features to the segmentation datasets, and optimizes the learning efficiency of the model. Once converged, the optimized filters of the encoder are set as light modulation patterns. Correspondingly, the single-pixel detector collects a sequence of coupled measurements that are input into the sensing decoder, which outputs the final segmentation results.

When training the network, we used the normalization initialization method with the bias initialized to 0, and used the Adam solver for gradient optimization. The weight decay was as 1e-4. The loss objective was set as the Mean Square Error. In the first training stage, we applied the STL-10 dataset

[21] which contains 300 120×120 images. The corresponding ground truth segmentation results were manually sketched by domain experts, where the nuclei, cytoplasms and background including red blood cells were marked in white, gray and black respectively. We expanded the dataset to 1200 images by horizontal and vertical mirroring, and then expanded these images three times through affine transformation and 50°rotation. Ultimately, we acquired 3600 images and randomly selected 2700 images to train the network, and evaluated its performance using the other 900 images. Each image is in gray scale and resized to 64×64 pixels. The entire training process took ∼7 hours on a computer with an AMD 3700x processor and NVIDIA RTX 3090 graphics card.

In addition, we also performed another simulation comparison of the different segmentation methods on the UESTC all-day Scenery (UAS) dataset [26]. The UAS dataset provides all-weather road images and corresponding binary labels, which discriminate the passable and impassable areas. We employed the images of four kinds of weather including sun, dusk, night, and rain, which contain 5670 training images and 710 testing images. We retrained and tested the image-free segmentation method and the conventional first-reconstruction-then-segmentation methods, and the results are presented in Fig. 5(b) (the sampling ratio is 0.01). We can see that the image-free segmentation technique produces better segmentation results than the conventional methods. It produces clear passable areas with high quality at a low sampling ratio, while the TV-Rec technique failed to acquire road information to segment, and the DL-Rec technique produced wrong structure of passable areas.

In order to further validate the effectiveness of the reported technique in practical applications, we built a proof-of-concept setup to acquire single-pixel measurements, as shown in Fig. 6

. The pre-trained patterns were projected by a digital micromirror device (DMD, ViALUX V-7001) for illumination modulation. We set the sampling ratio as 0.01, and 40 patterns were projected for each target. The modulated light was projected onto a transmissive film printed of the target scene. The coupled signal was focused by a lens to an Si amplified photodetector (Thorlabs PDA100A2, 320?1100 nm). The measurements corresponding to different modulation patterns were input into the decoder network to output the final semantic segmentation results. The exemplar segmentation maps are presented in Fig.

7. We can see that the nuclei and cytoplasms areas of the TV-Rec method were wrongly segmented, while the DL-Rec method maintains segmentation aberrations. In comparison, the results of the image-free segmentation technique are consistent with the ground truth with high fidelity.

In summary, we report a novel image-free single-pixel segmentation technique that maintains low hardware and software complexity. Different from the conventional first-reconstruction-then-segmentation methods that require 2-D image acquisition, transmission and processing, the reported technique directly produces segmentation maps from compressed 1-D measurements through an end-to-end neural network, which reduces both hardware and software complexity of the system. Besides, the modulation patterns in the single-pixel acquisition process are pre-trained and optimized together with the sensing network, which improves both the system’s acquisition and segmentation efficiency. In such a computational sensing framework, the reported technique enables to effectively reduce data amount by two orders of magnitude, which might open up a new avenue for real-time scene segmentation on resource-limited platforms such as unmanned aerial vehicle and unmanned vehicle.

, which enables to focus on the areas that need to be segmented to improve segmentation accuracy. Second, although the learned modulation patterns achieve higher segmentation efficiency, they are at gray scale that consumes long implementation time using DMD or other light modulators compared to the binary patterns. We can further train binarized convolution kernels that maintain high implementation speed to lower acquisition time

[28]. Third, the current network is running on the GPU server. To make the system applicable on resource-limited embedded platforms, we will further simplify the network model by judging the importance of different convolution kernels, and deleting filters with little loss of accuracy to reduce network scale [29, 30].