Nonlocal image representation has been successfully used in many image-related inverse problems including denoising, deblurring and deblocking. However, a majority of reconstruction methods only exploit the nonlocal self-similarity (NSS) prior of the degraded observation image, it is very challenging to reconstruct the latent clean image. In this paper we propose a novel model for image denoising via group sparsity residual and external NSS prior. To boost the performance of image denoising, the concept of group sparsity residual is proposed, and thus the problem of image denoising is transformed into one that reduces the group sparsity residual. Due to the fact that the groups contain a large amount of NSS information of natural images, we obtain a good estimation of the group sparse coefficients of the original image by the external NSS prior based on Gaussian Mixture model (GMM) learning and the group sparse coefficients of noisy image is used to approximate the estimation. Experimental results have demonstrated that the proposed method not only outperforms many state-of-the-art methods, but also delivers the best qualitative denoising results with finer details and less ringing artifacts. 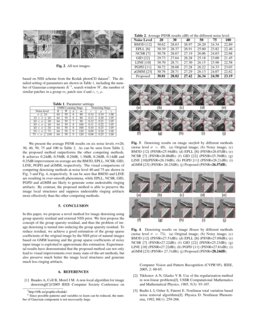 Image denoising is not only an important problem in various image processing studies, but also an idea test bed for measuring the statistical image modeling methods. It has attracted a lot of research interest in the past few decades [1, 3, 6, 8, 9, 10, 11, 12, 13, 14]. Image denoising aims to estimate the latent clean image X from its noisy observation \emph{Y}=\emph{X}+\emph{V}, where V is usually assumed to be additive white Gaussian noise. Due to the ill-posed nature of image denoising, it is critical to exploit the prior knowledge that characterizes the statistical features of the images.

Previous models mainly employed priors on level of pixel, such as Tikhonov regularization [2], total variation (TV) regularization [3]. These methods are effective in removing the noise artifacts but smear out details and tend to oversmooth the images [4, 5].

Recently, patch-based prior have shown promising performance in image denoising. One representative example is sparse coding based scheme, which assumes that each patch of an image can be precisely represented by a sparse coefficient vector whose entries are mostly zero or close to zero

[6, 11, 5, 7]. Considering that natural images are non-Gaussian and image patches are regarded as samples of a multivariate vector, Gaussian mixture models (GMMs) have emerged as favored prior for natural image patches in various image restoration studies [8, 9, 10, 11]. However, patch-based model usually suffers from some limits, such as great computational complexity, neglecting the relationship among similar patches [16, 24].

Inspired by the fact that natural images contain a large number of mutually similar patches at different locations, this so-called nonlocal self-similarity (NSS) prior was initially utilized in the work of nonlocal mean denoising[1]. Due to its effectiveness, a large amount of further developments [11, 12, 13, 14, 4, 5, 7, 16, 24, 15] have been proposed. For instance, a very popular method is BM3D [12], which exploited nonlocal similar 2D image patches and 3D transform domain collaborative filtering. In [13], Marial \emphetal. advanced the idea of NSS by group sparse coding. LPG-PCA [14] uses nonlocal similar patches as data samples to estimate statistical parameters for PCA training. In practical, these methods belong to the category of group sparsity.

With the above considerations, in this work we propose a novel method for image denoising with group sparsity residual and external NSS prior. The contribution of this paper is as follows. First, to improve the performance of image denoising, we propose the concept of group sparsity residual, and thus the problem of image denoising turned into reducing the group sparsity residual. Second, due to the fact that the groups contain a large amount of NSS information of natural images, to reduce residual, we obtain a good estimation of the group sparse coefficients of the original image by the NSS prior of natural images based on Gaussian Mixture model (GMM) learning and the group sparse coefficients of noisy input image is used to approximate the estimation. Our experimental results have demonstrated that the proposed method outperforms many state-of-the-art methods. What’s more, the proposed method delivers the best qualitative denoising results with finer details and less ringing artifacts.

Recent studies [12, 13, 16, 15] have revealed that structured or group sparsity can offer powerful reconstruction performance for image denoising. To be concrete, given a clean image X, for each image patch x of size d×d in X, its m best matched patches are selected from a W×W sized search window to form a group \emph{X}i, denoted by \emph{X}i={\emph{x}i,1,\emph{x}i,2,...,\emph{x}i,m}, where \emph{x}i,m denotes the m-th similar patch (column vector) of the i-th group. Similar to patch-based sparse coding [6, 5, 7], given a dictionary \emph{D}i, each group \emph{X}i can be sparsely represented as \emph{B}i=\emph{D}Ti\emph{X}i and solved by the following ℓp-norm minimization problem,

where λ is the regularization parameter, and p characterizes the sparsity of \emph{B}i. Then the whole image X can be represented by the set of group sparse codes {\emph{B}i}.

In image denoising, each noise patch y is extracted from the noisy image Y, like in the above paragraph, we search for its similar patches to generate a group \emph{Y}i, i.e., \emph{Y}i={\emph{y}i,1,\emph{y}i,2,...,\emph{y}i,m}. Thus, image denoising then is turned to how to recover \emph{X}i from \emph{Y}i by using group sparse coding,

Once all group sparse codes {\emph{A}i} are achieved, the latent clean image X can be reconstructed as ^\emph{X}=\emph{D}\emph{A}.

As we know, only considering the NSS prior of noisy input image, it is very challenging to recover the latent clean image from noisy observation image. In this section, to improve the performance of image denoising, we propose the concept of group sparsity residual, and thus the problem of image denoising is translated into reducing the group sparsity residual. Due to the fact that groups possess a large amount of NSS information of natural images, to reduce residual, a good estimation of the group sparse coefficients of the original image is obtained by the external NSS prior based on GMM learning and the group sparse coefficients of noisy image is used to approximate the estimation.

However, it can be seen that the true group sparse codes B and p are unknown because the original image X is not available. We now discuss how to obtain B and p.

3.2 How to estimate the true group sparse codes B

Since the original image X is not available, it seems to be difficult to obtain the true group sparse codes B. Nonetheless, we can compute some good estimation of B. Generally speaking, there are various methods to estimate the true group sparse codes B, which depends on the prior knowledge of B we have. In recent years, patch-based or group-based priors referring to denoising operators learned from natural images achieved the state-of-the-art denoising results [6, 8, 11]. For instance, in [6], a dictionary learning-based method is introduced for compact patch representation, whereas in [11], a GMM model is learned from natural image groups based on NSS scheme and used as a prior for denoising. Due to the fact that the groups contain a rich amount of NSS information of natural images, we can achieve a good estimation of B by the NSS prior of natural images based on GMM learning.

3.2.1 Learning the NSS prior from natural images by GMM

Like in subsection 2.1, we extract n groups from a given clean natural image dataset, and we denote one group as

We collectively represent three parameters μk,Σk and πk by Θ={μk,Σk,πk}Kk=1, and Θ

, the best suitable Gaussian component is selected from this group-based GMM learning stage. Specifically, assume that the image is corrupted by the Gaussain white noise with variance

σ2, then the covariance matrix of the k-th Gaussian component will turn into Σk+σ2\emph{I}, where I

represents the identity matrix. The selection that

\emph{Y}i belongs to the k

-th Gaussian component can be accomplished by computing the following posterior probability,

We maximize it, and finally, the Gaussian component with the highest probability is selected to operate each group \emph{Y}i.

. By using singular value decomposition to

is an orthonormal matrix formed by the eigenvector of

is the diagonal matrix of eigenvalues. With the group-based GMM learning, as the statistical structures of NSS variations in natural image are captured by the eigenvectors in

\emph{U}k, and thus \emph{U}k can be used to represent the structural variations of the groups in that component. Finally, for each group \emph{Y}i, the true group sparse code \emph{B}i can be estimated by \emph{B}i=\emph{U}k−1\emph{Y}i.

Similar to \emph{B}i, the covariance matrix of each group \emph{Y}i is defined as Σi and we have

where \emph{D}i is an orthonormal matrix formed by the eigenvector of Σi and Λi is the diagonal matrix of eigenvalues. Thus, \emph{A}i can be solved by \emph{A}i=\emph{D}i−1\emph{Y}i.

are added by Gaussian white noise with standard deviation

For fixed ~βi and λ, it can be seen that Eq. (11) is convex and can be solved efficiently by using some iterative thresholding algorithms. We adopt the surrogate algorithm in [19] to solve Eq. (11). In the t+1-iteration, the proposed shrinkage operator can be calculated as

where \emph{S}λ(⋅) is the soft-thresholding operator, ^~\emph{x}i represents the vectorization of the i-th reconstructed group ^\emph{X}i. The above shrinkage operator follows the standard surrogate algorithm, and more details can be seen in [19].

The parameter λ that balances the fidelity term and the regularization term should be adaptively determined for better denoising performance. Inspired by [20], the regularization parameter λi of each group \emph{Y}i is set as λi=c∗2√2σ2/σi, where σi denotes the estimated variance of \emph{R}i, and c is a small constant.

Besides, we could execute the above denoising procedures for better results after several iterations. In the t+1-th iteration, the iterative regularization strategy [21] is used to update the estimation of noise variance. Then the standard divation of noise in t+1-th iteration is adjusted as (σt+1)=γ∗√(σ2−||\emph{Y}−^\emph{X}t+1||22), where γ is a constant.

According to the above analysis, it can be seen that the proposed model employs the group sparsity residual and external NSS prior for image denoising. The proposed denoising procedure is summarized in Algorithm 1.

In this section, we validate the performance of the proposed denoising algorithm and compare it with several state-of-the-art denoising methods, including BM3D [12], EPLL [8], NCSR [7], GID [22], LINE [10], PGPD [11] and aGMM [23]. We evaluate the competing methods on 14 typical natural images, whose scene are displayed in Fig. 2. The training groups used in our experiments were sampled based on NSS scheme from the Kodak photoCD dataset333http://r0k.us/graphics/kodak/.. The detailed setting of parameters are shown in Table 1, including the number of Gaussian components K 444 Since possible patterns and variables to learn can be reduced, the number of Gaussian component is not necessarily large., search window W, the number of similar patches in a group m, patch size d and c, γ, ρ.

The visual comparisons of competing denoising methods at noise level 40 and 75 are shown in Fig. 3 and Fig. 4, respectively. It can be seen that BM3D and LINE are resulting in over-smooth phenomena, while EPLL, NCSR, GID, PGPD and aGMM are likely to generate some undesirable ringing artifacts. By contrast, the proposed method is able to preserve the image local structures and suppress undesirable ringing artifacts more effectively than the other competing methods.