Audio processing models based on deep neural networks are susceptible to adversarial attacks even when the adversarial audio waveform is 99.9 to a benign sample. Given the wide application of DNN-based audio recognition systems, detecting the presence of adversarial examples is of high practical relevance. By applying anomalous pattern detection techniques in the activation space of these models, we show that 2 of the recent and current state-of-the-art adversarial attacks on audio processing systems systematically lead to higher-than-expected activation at some subset of nodes and we can detect these with up to an AUC of 0.98 with no degradation in performance on benign samples. 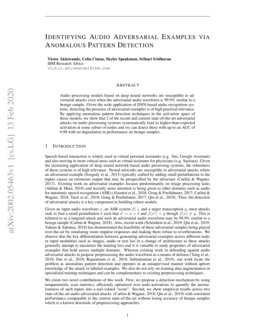 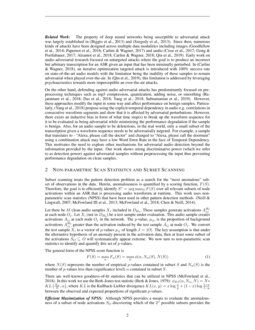 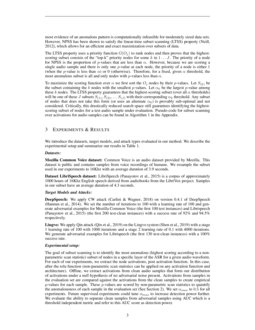 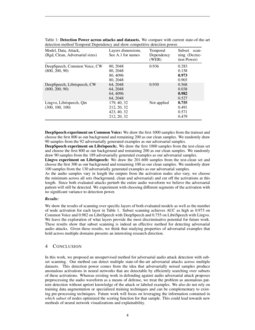 Speech-based interaction is widely used in virtual personal assistants (e.g. Siri, Google Assistant) and also moving to more critical areas such as virtual assistants for physicians (e.g. Saykara). Given the increasing application of deep neural network-based audio processing systems, the robustness of these systems is of high relevance. Neural networks are susceptible to adversarial attacks where an adversarial example (Szegedy et al., 2013) typically crafted by adding small perturbations to the inputs causes an erroneous output that may be prespecified by the adversary (Carlini and Wagner, 2017). Existing work on adversarial examples focuses predominantly on image processing tasks (Akhtar and Mian, 2018)

Given an input audio waveform x, an ASR system f(.), and a target transcription y, most attacks seek to find a small perturbation δ such that x′=x+δ and f(x′)=y though f(x)≠y. This is referred to as a targeted attack and such an adversarial audio waveform may be 99.9% similar to a benign sample (Carlini and Wagner, 2018). Also, recent work (Schönherr et al., 2019; Qin et al., 2019; Yakura and Sakuma, 2018) has demonstrated the feasibility of these adversarial samples being played over-the-air by simulating room impulse responses and making them robust to reverberations. We observe that the key differentiation between generating adversarial examples across different tasks or input modalities such as images, audio or text lies in a change of architecture as these attacks generally attempt to maximize the training loss and it is valuable to study properties of adversarial examples that hold across multiple domains. Whereas existing work in defending against audio adversarial attacks in propose preprocessing the audio waveform as a means of defense (Yang et al., 2018; Das et al., 2018; Rajaratnam et al., 2018; Subramanian et al., 2019), our work treats the problem as anomalous pattern detection and operates in an unsupervised manner without apriori knowledge of the attack or labeled examples. We also do not rely on training data augmentation or specialized training techniques and can be complementary to existing preprocessing techniques.

We claim two novel contributions of this work. First, we propose a detection mechanism by using nonparametric scan statistics, efficiently optimized over node-activations to quantify the anomalousness of such inputs into a real-valued “score”. Second, we show empirical results across two state-of-the-art audio adversarial attacks  (Carlini and Wagner, 2018; Qin et al., 2019) with consistent performance comparable to the current state-of-the-art without losing accuracy of benign samples which is a known downside of preprocessing approaches.

Related Work: The property of deep neural networks being susceptible to adversarial attack was largely established in (Biggio et al., 2013) and (Szegedy et al., 2013). Since then, numerous kinds of attacks have been designed across multiple data modalities including images (Goodfellow et al., 2014; Papernot et al., 2016; Carlini and Wagner, 2017) and audio (Cisse et al., 2017; Gong and Poellabauer, 2017; Alzantot et al., 2018; Carlini and Wagner, 2018; Qin et al., 2019). Early work on audio adversarial research focused on untargeted attacks where the goal is to produce an incorrect but arbitrary transcription for an ASR given an input that has been minimally perturbed. In (Carlini and Wagner, 2018), an iterative optimization targeted attack is introduced with 100% success rate on state-of-the-art audio models with the limitation being the inability of these samples to remain adversarial when played over-the-air. In (Qin et al., 2019), this limitation is addressed by leveraging psychoacoustics towards more imperceptible an over-the-air attacks.

On the other hand, defending against audio adversarial attacks has predominantly focused on preprocessing techniques such as mp3 compression, quantization, adding noise, or smoothing (Rajaratnam et al., 2018; Das et al., 2018; Yang et al., 2018; Subramanian et al., 2019). However, these approaches modify the input in some way and affect performance on benign samples. Particularly, (Yang et al., 2018) propose using the explicit temporal dependency in audio e.g. correlations in consecutive waveform segments and show that it is affected by adversarial perturbations. However, there exists an inductive bias in form of what time step(s) to break up the waveform sequence for it to be evaluated as being adversarial while minimizing the performance degradation if the sample is benign. Also, for an audio sample to be deleterious, in the real world, only a small subset of the transcription given a waveform sequence needs to be adversarially targeted. For example, a sample that translates to - “Alexa, please call the doctor” and changed to “Alexa, please call the doorman” using a combination attack may have a low Word Error Rate in the face of Temporal Dependency. This motivates the need to explore other mechanisms for adversarial audio detection beyond the information provided by the input. Our work shows strong discriminative power (which we refer to as detection power) against adversarial samples without preprocessing the input thus preventing performance degradation on clean samples.

Subset scanning treats the pattern detection problem as a search for the “most anomalous” subset of observations in the data. Herein, anomalousness is quantified by a scoring function, F(S). Therefore, the goal is to efficiently identify S∗=argmaxSF(S) over all relevant subsets of node activations within an ASR that is processing audio waveforms at runtime. This work uses non-parametric scan statistics (NPSS) that have been used in other pattern detection methods  (Neill and Lingwall, 2007; McFowland III et al., 2013; McFowland et al., 2018; Chen and Neill, 2014).

to a vector of

p-values pij of length J=|O|. The key assumption is that under the alternative hypothesis of an anomaly present in the activation data, then at least some subset of the activations SO⊆O will systematically appear extreme. We now turn to non-parametric scan statistics to identify and quantify this set of p-values.

The general form of the NPSS score function is

There are well-known goodness-of-fit statistics that can be utilized in NPSS (McFowland et al., 2018)

. In this work we use the Berk-Jones test statistic

(Berk and Jones, 1979): ϕBJ(α,Nα,N)=N∗KL(NαN,α), where KL is the Kullback-Liebler divergence KL(x,y)=xlogxy+(1−x)log1−x1−y between the observed and expected proportions of significant p-values.

Efficient Maximization of NPSS: Although NPSS provides a means to evaluate the anomalousness of a subset of node activations SO discovering which of the 2J possible subsets provides the most evidence of an anomalous pattern is computationally infeasible for moderately sized data sets. However, NPSS has been shown to satisfy the linear-time subset scanning (LTSS) property (Neill, 2012), which allows for an efficient and exact maximization over subsets of data.

The LTSS property uses a priority function G(Oj) to rank nodes and then proves that the highest-scoring subset consists of the “top-k” priority nodes for some k in 1…J. The priority of a node for NPSS is the proportion of p-values that are less than α. However, because we are scoring a single audio sample and there is only one p-value at each node, the priority of a node is either 1 (when the p-value is less than α) or 0 (otherwise). Therefore, for a fixed, given α threshold, the most anomalous subset is all and only nodes with p-values less than α.

To maximize the scoring function over α we first sort the Oj nodes by their p-values. Let S(k) be the subset containing the k nodes with the smallest p-values. Let αk be the largest p-value among these k nodes. The LTSS property guarantees that the highest-scoring subset (over all α thresholds) will be one of these J subsets S(1),S(2),…S(J) with their corresponding αk threshold. Any subset of nodes that does not take this form (or uses an alternate αk) is provably sub-optimal and not considered. Critically, this drastically reduced search space still guarantees identifying the highest-scoring subset of nodes for a test audio sample under evaluation. Pseudo-code for subset scanning over activations for audio samples can be found in Algorithm 1 in the Appendix.

We introduce the datasets, target models, and attack types evaluated in our method. We describe the experimental setup and summarize our results in Table 1.

Mozilla Common Voice dataset: Common Voice is an audio dataset provided by Mozilla. This dataset is public and contains samples from voice recordings of humans. We resample the subset used in our experiments to 16Khz with an average duration of 3.9 seconds.

Dataset LibriSpeech dataset: LibriSpeech (Panayotov et al., 2015) is a corpus of approximately 1000 hours of 16Khz English speech derived from audiobooks from the LibriVox project. Samples in our subset have an average duration of 4.3 seconds.

The goal of subset scanning is to identify the most anomalous (highest scoring according to a non-parametric scan statistic) subset of nodes in a specific layer of the ASR for a given audio waveform. For each of our experiments, we extract the node activations, post activation function. In this case, after the relu function (non-parametric scan statistics can be applied on any activation function and architecture). Offline, we extract activations from clean audio samples that form our distribution of activations under a null hypothesis of no adversarial noise present. Activations from samples in the evaluation set are compared against the activations from the clean samples to create empirical

p-values for each sample. These p-values are scored by non-parametric scan statistics to quantify the anomalousness of each sample in the evaluation set (See Section 2). We set αmax to 0.5 for all experiments. Future supervised experiments could tune αmax to increase detection power further. We evaluate the ability to separate clean samples from adversarial samples using AUC which is a threshold independent metric and refer to this AUC score as detection power.

As the audio samples vary in length the outputs from the activation nodes also vary, we choose the minimum across all sets (background, clean and adversarial) and cut off the activations at this length. Since both evaluated attacks perturb the entire audio waveform we believe the adversarial pattern will still be detected. We experiment with choosing different segments of the activation with no significant variance to detection power.

We show the results of scanning over specific layers of both evaluated models as well as the number of node activation for each layer in Table 1. Subset scanning achieves AUC as high as 0.973 on Common Voice and 0.982 on LibriSpeech with DeepSpeech and 0.755 on LibriSpeech with Lingvo. We leave the exploration of what layers provide the most discriminative potential for future work. These results show that subset scanning is indeed an effective method for detecting adversarial audio attacks. Given these results, we think that studying properties of adversarial examples that hold across multiple domains presents an interesting research direction.

In this work, we proposed an unsupervised method for adversarial audio attack detection with subset scanning. Our method can detect multiple state-of-the-art adversarial attacks across multiple datasets. This detection power comes from the idea that adversarially noised samples produce anomalous activations in neural networks that are detectable by efficiently searching over subsets of these activations. Whereas existing work in defending against audio adversarial attack proposes preprocessing the audio waveform as a means of defense, we treat the problem as anomalous pattern detection without apriori knowledge of the attack or labeled examples. We also do not rely on training data augmentation or specialized training techniques and can be complementary to existing pre-processing techniques. Future work will focus on leveraging the information contained in which subset of nodes optimized the scoring function for that sample. This could lead towards new methods of neural network visualizations and explainability.

This appendix is meant to provide implementation details that are relevant to readers wishing to implement their version of our experiments. Direct code is provided on Github

. We also provide the algorithm pseudo-code as well as detailed detection power plots. All the evaluated attacks are implemented and open-sourced by their authors.