Identification in a Fully Nonparametric Transformation Model with Heteroscedasticity

The so far most general identification result in the context of nonparametric transformation models is proven. The result is constructive in the sense that it provides an explicit expression of the transformation function. 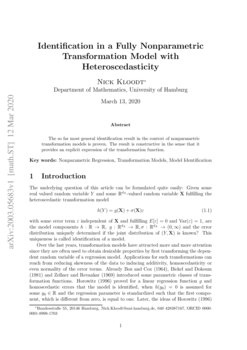 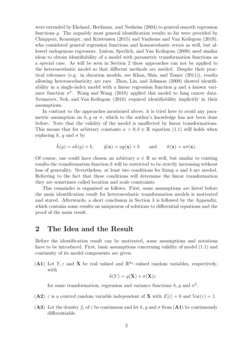 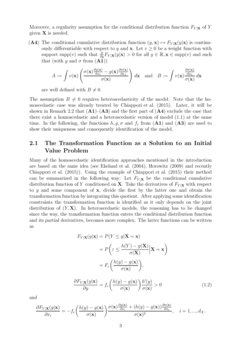 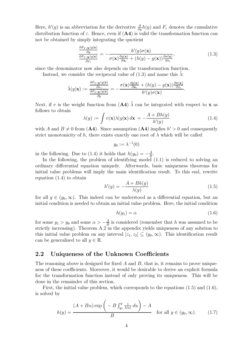 We show nonparametric identification of the parameters in the dynamic st...
Ann-Kristin Becker, et al. ∙

Identification of a class of index models: A topological approach

What was the river Ister in the time of Strabo? A mathematical approach

In this paper, we introduce a novel method for map registration and appl...
Karol Mikula, et al. ∙

The underlying question of this article can be formulated quite easily: Given some real valued random variable

(Y,X) is known? This uniqueness is called identification of a model.

Over the last years, transformation models have attracted more and more attention since they are often used to obtain desirable properties by first transforming the dependent random variable of a regression model. Applications for such transformations can reach from reducing skewness of the data to inducing additivity, homoscedasticity or even normality of the error terms. Already

proved for a linear regression function

g and homoscedastic errors that the model is identified, when h(y0)=0 is assumed for some y0∈R and the regression parameter is standardized such that the first component, which is different from zero, is equal to one. Later, the ideas of Horowitz (1996) were extended by Ekeland et al. (2004) to general smooth regression functions g. The arguably most general identification results so far were provided by Chiappori et al. (2015) and Vanhems and Van Keilegom (2019), who considered general regression functions and homoscedastic errors as well, but allowed endogenous regressors. Linton et al. (2008) used similar ideas to obtain identifiability of a model with parametric transformation functions as a special case. As will be seen in Section 2 these approaches can not be applied to the heteroscedastic model so that different methods are needed. Despite their practical relevance (e.g. in duration models, see Khan et al. (2011)), results allowing heteroscedasticity are rare. Zhou et al. (2009) showed identifiability in a single-index model with a linear regression function g

and a known variance function

In contrast to the approaches mentioned above, it is tried here to avoid any parametric assumption on h,g or σ

, which to the author’s knowledge has not been done before. Note that the validity of the model is unaffected by linear transformations. This means that for arbitrary constants

Of course, one could have chosen an arbitrary a∈R as well, but similar to existing results the transformation function h will be restricted to be strictly increasing without loss of generality. Nevertheless, at least two conditions for fixing a and b are needed. Referring to the fact that these conditions will determine the linear transformation they are sometimes called location and scale constraints.

This remainder is organized as follows. First, some assumptions are listed before the main identification result for heteroscedastic transformation models is motivated and stated. Afterwards, a short conclusion in Section 3 is followed by the Appendix, which contains some results on uniqueness of solutions to differential equations and the proof of the main result.

2 The Idea and the Result

Before the identification result can be motivated, some assumptions and notations have to be introduced. First, basic assumptions concerning validity of model (1.1) and continuity of its model components are given.

Moreover, a regularity assumption for the conditional distribution function FY|X of Y given X is needed.

The assumption B≠0 requires heteroscedasticity of the model. Note that the homoscedastic case was already treated by Chiappori et al. (2015). Later, it will be shown in Remark 2.2 that 1–3 and the first part of 1 exclude the case that there exist a homoscedastic and a heteroscedastic version of model (1.1) at the same time. In the following, the functions h,g,σ and fε from 1 and 3 are used to show their uniqueness and consequently identification of the model.

2.1 The Transformation Function as a Solution to an Initial Value Problem

Here, h′(y) is an abbreviation for the derivative ∂∂yh(y) and Fε denotes the cumulative distribution function of ε. Hence, even if 1 is valid the transformation function can not be obtained by simply integrating the quotient

since the denominator now also depends on the transformation function.

Instead, we consider the reciprocal value of (1.3) and name this ~λ:

Next, if v is the weight function from 1 ~λ can be integrated with respect to x as follows to obtain

with A and B≠0 from 1. Since assumption 1 implies h′>0 and consequently strict monotonicity of h, there exists exactly one root of λ which will be called

In the following, the problem of identifying model (1.1

for some y1>y0 and some α>−AB is considered (remember that h was assumed to be strictly increasing). Theorem A.2 in the appendix yields uniqueness of any solution to this initial value problem on any interval [z1,z2]⊆(y0,∞). This identification result can be generalized to all y∈R.

2.2 Uniqueness of the Unknown Coefficients

The reasoning above is designed for fixed A and B, that is, it remains to prove uniqueness of these coefficients. Moreover, it would be desirable to derive an explicit formula for the transformation function instead of only proving its uniqueness. This will be done in the remainder of this section.

First, the initial value problem, which corresponds to the equations (1.5) and (1.6), is solved by

By straightforward calculations, it can be verified that (1.7) is indeed a solution to the initial value problem. Second, as was already mentioned in the introduction, model (1.1) is not only fulfilled for h,g,σ, but also for any linear transformation of these functions. Therefore, to obtain uniqueness it is necessary to fix these linear transforms. This can be done by requiring so called location and scale constraints and corresponds to fixing A and α. While

If there exist two coefficients B≠~B such that the corresponding transformation functions from (1.9) fulfil model (1.1), it would hold that

Assume without loss of generality ~B>B>0. Then,

Therefore, continuous differentiability of h and ~h would imply ~h′(y0)=0, which due to (1.2) would lead to a violation of 1. Hence, B is unique under 1–1, which finally leads to the main identification result. Note that the same argument is valid for transformation functions as in (1.7) since these are simply linearly transformed versions of (1.9).

Moreover, B is uniquely determined and it holds that

The proof can be found in Section B.

Finally, two remarks are given dealing on the one hand with further generalizations and implications for future estimation and testing techniques and on the other hand with justifying alternative identification constraints.

One could have used other scale and location constraints than (1.6) and (1.8). For example, consider for some real numbers ya<yb,αa<αb the conditions

Assume there exist two transformation functions T1,T2 such that model (1.1) and the constraints (1.14) are fulfilled. Then, the functions

for some ya,αa∈R,αb>0 ensure uniqueness of the transformation function as well.

The so far most general identification result in the theory of transformation models has been provided. While doing so, the techniques of Ekeland et al. (2004) and Chiappori et al. (2015) have been used to reduce the problem of identifiability to that of solving an ordinary differential equation. Most of the previous results are contained as special cases. The main contribution consists in allowing heteroscedastic errors, which justifies the common practice to assume identifiability like for example in the paper of Neumeyer et al. (2016).

Due to the explicit character of equation (1.7), future research could consist in analysing the resulting plug-in estimator. This will be the topic of a subsequent paper. Furthermore, the presented results could be successively generalized as in Remark 2.2 or by allowing vanishing derivatives of h. Moreover, it would be desirable to develop conditions on the joint distribution function of (Y,X) under which model (1.1) is fulfilled. In contrast to the thoughts on identifiability here, such a question addresses the solvability of (1.1), that is, the issue of existence of a solution instead of uniqueness.

Appendix A Uniqueness of Solutions to Ordinary Differential Equations

In this Section, two basic results about ordinary differential equations and uniqueness of possible solutions are given. Theorem A.2 is slightly modified compared to the version of Forster (1999, p. 102) so that the proof is presented as well.

Proof: Let h1,h2:[a,b]→R+ be two solutions of the mentioned initial value problem. Since

Appendix B Proof of Theorem 2.1

. For the moment assume

With the choices a=y1,b=k2 and θ0=α, Theorem A.2 ensures uniqueness of the solution to

By straightforward calculations, it can be verified that (1.7) is indeed a solution to this initial value problem. Since fε(y)>0 for all y∈R, this solution holds for arbitrarily large k2. Hence, by letting k2 tend to infinity uniqueness of h on [y1,∞) is obtained.

Now, consider an arbitrary value ~y∈(y0,y1). Then, if the previous initial condition is replaced by

for some ~α>0, the same reasoning as before can be used to show that the differential equation

is uniquely solved under this constraint by

for all y∈[~y,∞), where the last equation follows from (1.7). To fulfil the previous scale constraint h(y1)=α it is required that

When proceeding analogously for y<y0 with the initial condition

Recall h′(y)>0 for all y∈R and let t>0. Due to the continuous differentiability of h in y0, one has

On the other hand, it holds that

This leads to the uniqueness of solution (1.10), since uniqueness of B was already shown in Section 2.2. Inserting A=0 yields the second part of the assertion, while identification of g and σ

as the conditional mean and standard deviation follows from standard arguments.

This work was supported by the DFG (Research Unit FOR 1735 Structural Inference in Statistics: Adaptation and Effciency). Moreover, I would like to thank Natalie Neumeyer and Ingrid Van Keilegom for their very helpful suggestions and comments on the project.