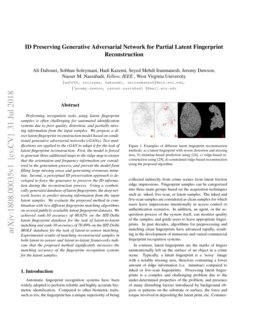 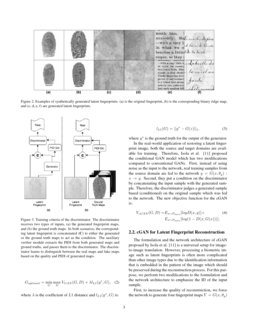 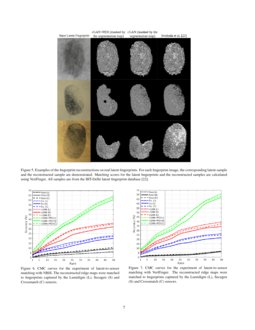 Elastic distortion of fingerprints has a negative effect on the performa...
Ali Dabouei, et al. ∙

Latent fingerprint has the practical value to identify the suspects who ...
Jinwei Xu, et al. ∙

Latent fingerprints are one of the most important and widely used eviden...
Kai Cao, et al. ∙

Automatic fingerprint recognition systems have been widely adopted to perform reliable and highly accurate biometric identification. Compared to other biometric traits, such as iris, the fingerprint has a unique superiority of being collected indirectly from crime scenes from latent friction ridge impressions. Fingerprint samples can be categorized into three main groups based on the acquisition techniques such as: inked, live-scan, or latent samples. The inked and live-scan samples are considered as clean samples for which users leave impressions intentionally in access control or authentication scenarios. In addition, an agent, or the acquisition process of the system itself, can monitor quality of the samples, and guide users to leave appropriate fingerprints. In past decades, algorithms for preprocessing and matching clean fingerprints have advanced rapidly, resulting in the development of numerous and varied commercial fingerprint recognition systems.

In contrast, latent fingerprints are the marks of fingers unintentionally left on the surface of an object in a crime scene. Typically, a latent fingerprint is a ‘noisy’ image with a notable missing area, therefore containing a lower amount of ridge information (i.e. minutiae) compared to inked or live-scan fingerprints. Processing latent fingerprints is a complex and challenging problem due to the under-determined properties of the problem, and presence of many disturbing factors introduced by background objects or patterns on the substrate or surface, the force and torque involved in depositing the latent print, etc. Commercial and state-of-the-art methods for recognizing the inked or live-scan fingerprints often fail to process latent samples, even in the preprocessing stage [16]. Therefore, various approaches have been proposed in the literature to tackle the problem of latent [15, 34, 33, 5, 1] and distorted [3, 26, 25] fingerprints.

1(c) shows a reconstructed ridge map for a latent fingerprint with severe distortion. As the reconstructed ridge map indicates, algorithm [29] generates meaningful ridge information for parts that contain some ridge information in the input latent sample, but for other parts it produces random ridge patterns which drastically decreases the matching score.

directly predict the type and location of minutiae of the latent fingerprints without reconstructing the ridge pattern. Minutiae-based reconstruction methods are more robust against severe distortion or missing areas of the input latent fingerprint, since they predict the probability of a minutia by analyzing a small area around each candidate ridge point, and they reject large missing areas. Hence, this rejection drastically decreases the number of founded minutiae. Figure

1(b) shows some minutiae that were detected using local processing of a latent fingerprint.

In this study we developed a deep convolutional neural network (DCNN) model to reconstruct the ridge information of latent fingerprints. The core network in the model is a conditional generative adversarial network (cGAN) that reconstructs the obscured ridge information of the latent samples. To overcome the limitation of the previous ridge-based reconstruction methods, our model predicts three extra maps in addition to the ridge map: the orientation, frequency and segmentation maps. Generating the orientation and frequency maps ensure that the model is considering the orientation and frequency information of the input latent fingerprints. Generating a segmentation map prevents the model from filling large missing areas in the input latent samples; thus, it optimizes the amount of ridge information that can be reconstructed. In addition, to force the generator to preserve the ID information (type and location of minutiae), we developed an auxiliary deep model to extract the perceptual ID information (PIDI) of the generated sample and fuse it into the cGAN model to enhance the reconstruction process.

where generator G tries to minimize Eq. 1 and discriminator D tries to maximize it. An additional L2 or L1 distance loss is added to the objective function in the literature to force the network to generate samples which are closer to the target ground truth. The final generator model trains as follows:

where λ is the coefficient of L1 distance and lL1(y∗,G) is:

where y∗ is the ground truth for the output of the generator.

In the real-world application of restoring a latent fingerprint image, both the source and target domains are available for training. Therefore, Isola et al. [11] proposed the conditional GAN model which has two modifications compared to conventional GANs. First, instead of using noise as the input to the network, real training samples from the source domain are fed to the network y=G(x,θg):x→y. Second, they put a condition on the discriminator by concatenating the input sample with the generated sample. Therefore, the discriminator judges a generated sample based (conditioned) on the original sample which was fed to the network. The new objective function for the cGAN is:

The formulation and the network architecture of cGAN proposed by Isola et al. [11]

is a universal setup for image-to-image translation. However, processing a biometric image such as latent fingerprints is often more complicated than other image types due to the identification information that is embedded in the pattern of the image which should be preserved during the reconstruction process. For this purpose, we perform two modifications to the formulation and the network architecture to emphasize the ID of the input sample.

First, to increase the quality of reconstruction, we force the network to generate four fingerprint maps Y=G(x,θg) for each latent fingerprint input as follows:

Eq. 3 computes the direct reconstruction error. For the new outputs of the generator, the same formula is extended as:

where, y∗R, y∗F, y∗O and y∗S are the ground truth values for the ridge, frequency, orientation and segmentation map respectively, and αR, αF, αO and αS are weights for scaling loss of reconstruction of each generated map. Since all maps except the ridge map have low-pass characteristic and may prevent the generator from predicting the ridge map with sufficient detail, we set αR to 1.0 and all other coefficients (αF, αO and αS) to 0.1.

Second, the generator should preserve the identification information embedded in minutiae and ridge patterns. To extract and preserve the identification information we developed a method that is inspired by perceptual loss [4, 7, 12, 17] and multi-level feature abstraction [27, 28, 13, 10]. For this purpose, we separately trained a deep Siamese CNN as a fingerprint verifier. The trained model is used to extract the perceptual ID information (PIDI) of the generated maps. Extracted PIDI are output feature maps of the first four convolutional layers of the verifier module, and are concatenated to the corresponding layers of the discriminator to emphasize the ID information on the discriminator’s decision. Figure 4(d) shows how the output feature maps of the verifier contributes to the discriminator’s decision making. Figure 3 shows the training criteria of the discriminator in more detail.

The generator is a ‘U-net’ [19, 11] auto-encoder CNN. In the ‘U-net’ architecture, some layers from the encoder are concatenated to layers of the decoder to keep the high frequency details of the input samples, and increase the quality of reconstruction in the decoder. Figure 4(a) shows a diagram of the generator, and Table 3 details the structure of the generator.

The whole generative model was trained over 400 epochs, each epoch consisting of 7,812 iterations with a batch size = 64. Adam optimization method

To evaluate the performance of the proposed latent fingerprint reconstruction technique, we conducted three different experiments on publicly available datasets of latent fingerprints. Unfortunately, NIST-SD27 [6] is no longer available, so the IIIT-Delhi Latent fingerprint [20] and IIIT-Delhi Multi Sensor Latent Fingerprint (MOLF) [23] databases were used to evaluate the proposed method. In all experiments, we used VeriFinger 7.0 SDK [18] and the NIST Biometrics Image Software (NBIS) [31] to match the reconstructed samples. In addition, to evaluate the role of the PIDI fusion which is developed to force the generator to preserve the ID information, we developed a second model which is exactly the same as our complete model but without the PIDI extractor module. Results for the complete model are named ‘cGAN+PIDI’, and results for the second model are named ‘cGAN’.

For the first experiment, we used the IIIT-Delhi MOLF database. This database contains 19,200 fingerprint samples from 1000 classes (10 fingers of 100 individuals). For each ID, a set of latent fingerprint samples and the corresponding clean samples captured from three different commercial fingerprint scanners (Crossmatch, Secugen, Lumidigm) are available. As in the testing protocol established by Sankaran et al. [23], the first and second fingerprint samples of each user captured by a sensor are selected as the gallery. The entire latent fingerprint database consisting of 4,400 samples used as the probe set. CMC curves for this experiment are shown in Figure 6 and Figure 7. Table 4 and Table 5 show rank-25 and rank-50 accuracy for the latent-to-sensor matching experiment.

For the second experiment, we evaluated the proposed method on the IIIT-Delhi latent fingerprint dataset which contains 1046 samples from all ten fingerprints recorded from 15 subjects. The experimental setup is defined the same as [20] by randomly choosing 395 images as gallery and 520 samples as probes. The CMC curves for this experiment is shown in Figure 9. Rank-1, rank-10 and rank-25 results are also shown in Table 6.

3.3 Quality of the reconstructed fingerprints

Recognizing latent fingerprint samples is a challenging problem for identification systems since a latent fingerprint image can be ‘noisy’ with a large portions of the fingerprint missing, leading to a lower amount of ridge information compared to normal fingerprints. Following the successful outcomes of exploiting deep generative models for the traditional image processing problems, such as denoising, inpainting, and image to image translations, we propose a deep latent fingerprint reconstruction model based on conditional generative adversarial networks. We applied two modifications to the cGAN formulation and network architecture to adapt it for the task of latent fingerprint reconstruction. Generated ridge maps using GAN models often contain random ridge patterns for severely distorted areas of the input fingerprint. Main generator of our model is forced to generate three extra fingerprint maps. One of these maps is the ridge segmentation map which shows the reliability of the corresponding ridge map.

Opposed to the previous works in the literature, the proposed network directly translates the input latent fingerprints to the clean binary ridge maps by predicting the missing ridge information. Incorporating a discriminator network which measures both quality and PIDI of the reconstructed samples simultaneously, along with the generation process in the training phase, increases the quality of the generated samples directly without a need to define multiple complex loss functions for minimizing the similarity between the generated ridge patterns and the ground truth maps.

The proposed method successfully reconstructed latent fingerprints from the IIIT-Delhi latent and IIIT-Delhi MOLF databases in different experimental setups of latent-to-sensor and latent-to-latent matching. We achieved rank-50 accuracy of 70.89% for the latent-to-sensor matching on the IIIT-Delhi MOLF database. For the latent-to-latent matching we achieved rank-10 accuracy of 88.02%. Although the best results in both experiments were obtained when VeriFinger was used as the matcher, NBIS matching algorithm also resulted in high matching accuracy.

In addition, measuring the quality of reconstructed fingerprints using NFIQ shows that the generated fingerprints are significantly enhanced compared to the raw latent samples.

For future work it is desired to directly extract minutiae from the latent input fingerprints. On the other hand, increasing the size of the synthetic latent database by introducing more complex distortions is another future direction for this work.

This work is based upon a work supported by the Center for Identification Technology Research and the National Science Foundation under Grant #1650474.