This article deals with the hypothesis test for the extremely heavy-tailed distributions with infinite mean or variance by using a truncated sample mean. We obtain three necessary and sufficient conditions under which the asymptotic distribution of the truncated test statistics converges to normal, neither normal nor stable or converges to -∞ or the combination of stable distributions, respectively. The numerical simulation illustrates an application of the theoretical results above in the hypothesis testing. 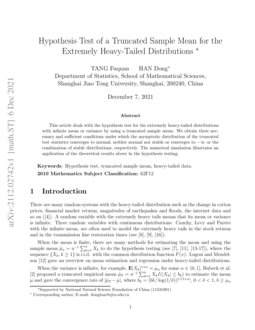 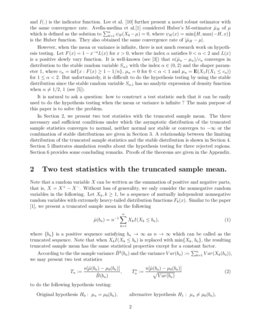 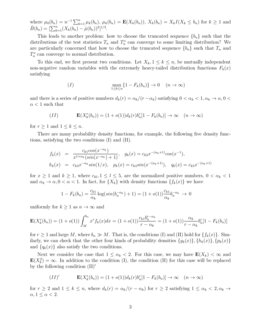 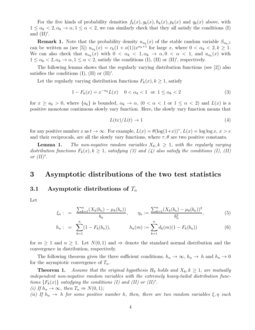 It is proved that the sum of n independent but non-identically distribut...
Hao Chen, et al. ∙

The test of homogeneity for normal mixtures has been conducted in divers...
Natsuki Kariya, et al. ∙

There are many random systems with the heavy-tailed distribution such as the change in cotton prices, financial market returns, magnitudes of earthquakes and floods, the internet data and so on ([4]). A random variable with the extremely heavy tails means that its mean or variance is infinite. Three random variables with continuous distributions: Cauchy, Levy and Pareto with the infinite mean, are often used to model the extremely heavy tails in the stock returns and in the transmission line restoration times (see [8], [9], [16]).

When the mean is finite, there are many methods for estimating the mean and using the sample mean

^μn=n−1∑nk=1Xk to do the hypothesis testing (see [7], [11], [13-17]), where the sequence {Xk,k≥1} is i.i.d. with the common distribution function F(x). Lugosi and Mendelson [12] gave an overview on mean estimation and regression under heavy-tailed distributions.

However, when the mean or variance is infinite, there is not much research work on hypothesis testing. Let F(x)=1−x−αL(x) for x>0, where the index α satisfies 0<α<2 and L(x) is a positive slowly vary function. It is well-known (see [3]) that n(^μn−μn)/cn converges in distribution to the stable random variable Sα,1 with the index α∈(0,2) and the shaper parameter 1, where cn=inf{x:F(x)≥1−1/n}, μn=0 for 0<α<1 and μn=E(X1I(X1≤cn)) for 1≤α<2. But unfortunately, it is difficult to do the hypothesis testing by using the stable distribution since the stable random variable Sα,1 has no analytic expression of density function when α≠1/2,1 (see [5]).

It is natural to ask a question: how to construct a test statistic such that it can be easily used to do the hypothesis testing when the mean or variance is infinite ? The main purpose of this paper is to solve the problem.

where {bn} is a positive sequence satisfying bn→∞ as n→∞ which can be called as the truncated sequence. Note that when XkI(Xk≤bn) is replaced with min{Xk,bn}, the resulting truncated sample mean has the same statistical properties except for a constant factor.

According to the the sample variance ^B2(bn) and the variance Var(bn):=∑nk=1Var(Xk(bn)), we may present two test statistics

to do the following hypothesis testing:

can converge to normal distribution.

. Similarly, we can check that the other four kinds of probability densities

The following lemma shows that the regularly varying distribution functions (see [2]) also satisfies the conditions (I), (II) or (II)′.

for any positive number x as t→∞. For example, L(x)=θ(log(1+x))τ, L(x)=loglogx,x>e and their reciprocals, are all the slowly vary functions, where τ,θ are two positive constants.

Lemma 1. The non-negative random variables Xk,k≥1, with the regularly varying distribution functions Fk(x),k≥1, satisfying (3) and (4) also satisfy the conditions (I), (II) or (II)′.

for m≥1 and n≥1. Let N(0,1) and ⇒ denote the standard normal distribution and the convergence in distribution, respectively.

The following theorem gives the three sufficient conditions, hn→∞, hn→h and hn→0 for the asymptotic convergence of Tn.

Theorem 1. Assume that the original hypothesis H0 holds and Xk,k≥1, are mutually independent non-negative random variables with the extremely heavy-tailed distribution functions {Fk(x)} satisfying the conditions (I) and (II) or (II)′. (i) If hn→∞, then Tn⇒N(0,1); (ii) If hn→h for some positive number h, then, there are two random variables ξ,η such that (ξn,ηn)⇒(ξ,η) and Tn⇒ξ/√η, where both ξ and η

have the following characteristic functions

Remark 2. It can be seen from the proof of (i) of Theorem 1 that the result in (i) still holds if we use the following weak conditions: there is a positive sequence {dk(r)} with

It is clear that hn→∞ or hn→0 mean that the truncated sequence {bn} approaches to infinity slowly or goes to infinity quickly, respectively.

As an application of (i) of Theorem 1, we can get the confidence interval for

By Theorem 1 we can further get the following theorem which gives the three necessary and sufficient conditions of asymptotic convergence of Tn.

Now we consider an application of Theorem 1 to the distribution functions {Fk(x)} satisfying (3) and (4). Let l(n) is an increasing positive sequence satisfying l(n)/n→0 as n→∞. Assume that

for large n. This means that {cn}∈Rc is the critical truncated sequence. It is clear that {bn}∈Rs for bn≤cn/˜L(n) and {bn}∈Rb for bn≥cn˜L(n), where ˜L(n) is a positive monotone continuous slowly vary function satisfying ˜L(n)→∞ as n→∞.

By Lemma 1 and Theorem 1 we have the following corollary.

Theorem 3. Under the conditions of Theorem 1, we have (i) Ton⇒N(0,1) if and only if hn→∞; (ii) Ton⇒Tα,h if and only if hn→h,0<h<∞, where the characteristic function of random variable Tα,h has the following form

Remark 4. Similar to (iv) of Theorem 1 we can check that Tα,h/h1/α⇒Sα,−1 as h→0 for 1<α<2. In other words, though the random variable Tα,h is not the stable random variable, its some limiting is.

Remark 5. From (iii)-(iv) of Theorem 1 and (iii) of Theorem 3 it follows that the asymptotic statistical properties of Tn and Ton are completely different. The reason is that Ton/Tn→0 in probability when hn→0. In fact, for small ε>0 and 0<α<1, by the condition (II) we have

Next we consider the general truncated sequence {bnk} satisfying bnk→∞ for every k≥1 as n→∞. Similar to Ton=Ton(bn) we can define the test statistics Ton(bnk) for n≥1 in the following

4 The relationship between Tα,1 and Sα,1

By the critical truncated sequence {cn}, we may decompose Sn,α,1 into two parts, Sn,α,1=Un+Vn, where Un and Vn are defined in the following

In this section, as an application of (i) of the theorems 1 and 3, the hypothesis testing will be studied by the numerical simulations based on the asymptotic distribution of Tn and Sn,α<span class="mjx-char MJXc-TeX-main-R" style="margin-top: -0.144em; padding-bottom: 0.519e