Traditional process monitoring methods, such as PCA, PLS, ICA, MD et al., are strongly dependent on continuous variables because most of them inevitably involve Euclidean or Mahalanobis distance. With industrial processes becoming more and more complex and integrated, binary variables also appear in monitoring variables besides continuous variables, which makes process monitoring more challenging. The aforementioned traditional approaches are incompetent to mine the information of binary variables, so that the useful information contained in them is usually discarded during the data preprocessing. To solve the problem, this paper focuses on the issue of hybrid variable monitoring (HVM) and proposes a novel unsupervised framework of process monitoring with hybrid variables. HVM is addressed in the probabilistic framework, which can effectively exploit the process information implicit in both continuous and binary variables at the same time. In HVM, the statistics and the monitoring strategy suitable for hybrid variables with only healthy state data are defined and the physical explanation behind the framework is elaborated. In addition, the estimation of parameters required in HVM is derived in detail and the detectable condition of the proposed method is analyzed. Finally, the superiority of HVM is fully demonstrated first on a numerical simulation and then on an actual case of a thermal power plant. 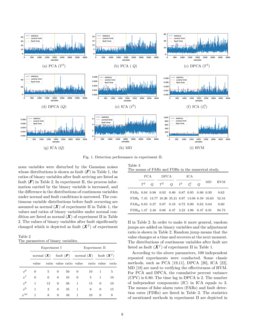 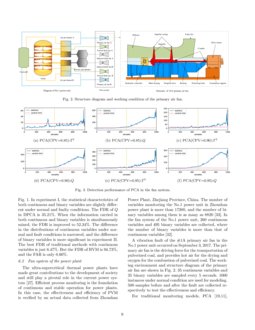 With the increasing intelligence and integration, a great number of two-...
Min Wang, et al. ∙

Process monitoring is indispensable because it is the premise and guarantee for the safe and stable running of industrial systems [12, 2, 14, 3, 36, 30]. In recent decades, a large number of data-driven approaches have been proposed for process monitoring [11, 20, 5, 23, 10, 35, 29, 4, 33, 38]. However, most of them are highly based on continuous variables because they can’t avoid involving Euclidean or Mahalanobis distance and can’t be utilized for hybrid variables (containing continuous and binary variables) [33].

Among data-driven methods, principal component analysis (PCA) has received continuous attention once it was applied in process monitoring due to its effectiveness of data dimensionality reduction

[22]. The Mahalanobis distance (MD) can also be directly used for process monitoring [18]. As understanding of the fault initiation becomes more and more thorough, the moving window methods also be proposed for incipient fault detection [17, 29, 27]. Considering the practical applicability in industrial processes, a large number of improved methods have been developed for multimode and nonstationary monitoring [37, 39, 16, 34].

The aforementioned methods have made remarkable achievements in process monitoring, but almost all methods are based on Euclidean or Mahalanobis distance and are highly dependent on continuous variables. However, the practical industrial processes sometimes have not only continuous variables, but also binary variables which may carry some useful information for process monitoring [33] and are usually deleted in the data preprocessing [13]. For hybrid variables, Langseth et al.

However, the hybrid variable approaches mentioned above are supervised methods and require both normal and fault data during training. Unfortunately, the systems in actual industrial processes are running without fault in most time, and the determination of fault samples requires repeated research and careful discussion by experts which is time-consuming and costly. So that the healthy state samples are usually available and it is difficult to collect sufficient fault instances, which is one of the reasons why monitoring methods only based on normal working condition data, such as PCA, PLS, ICA et al., have attracted much attention. Process monitoring methods with hybrid variables only based on healthy state data are very urgently. Therefore, this paper focuses on hybrid variable process monitoring and proposes a novel unsupervised framework of process monitoring with hybrid variables named HVM which can simultaneously capture the process information of both continuous and binary variables. The main contributions are summarized as follows:

The issue of supervised classification with hybrid variables has been paid attention to and investigated in other fields [21, 1, 40, 31]. In process monitoring, Wang et al.

. However, these approaches are supervised methods, which require both normal samples and fault instances to train the model. In practical processes, a lots of healthy state samples can be collected and it is difficult to obtain sufficient faulty samples. Therefore, this paper proposes a novel unsupervised framework of process monitoring with hybrid variables named HVM. HVM can simultaneously mine the information of both continuous and binary variables through a probabilistic framework. In HVM, the statistics of hybrid variables are computed with healthy state data and the control limit is determined by kernel density estimation (KDE)

[25]. Then for the arriving sample xa, the statistic sa can be computed with the same way of training. The state of xa can be determined through the monitoring strategy. Finally the superiority of HVM is demonstrated through a numerical simulation and an actual case in the fan system of a thermal power plant.

Training data X={xi}ni=1 are sampled under normal operating condition with n samples. xi∈Rd is the ith instance and contains d (d=db+dc) features where db binary features and dc continuous features are respectively collected. Let xj be the jth variable. When the system is running in a steady state, the monitoring data tends to be stationary and with no trends [38]. Then the following assumptions are introduced. If xj

is a continuous variable, we suppose it obeys Gaussian distribution under normal condition, that is

is the probability density function (pdf) which is defined as

are the mean and corresponding variance of the

is a binary variable, the Bernoulli distribution is introduced as follows

is the response probability which is defined as

The occurrence probability of xi under normal condition is defined as

where jb and jc mean the jbth and jcth variable of binary variables and continuous variables respectively, φ means the weight of the corresponding variable.

Affected by noise, there may be some outliers in data sampled under normal operating condition. Then the probability that

xi belongs to X can be obtained by

where P(N) is the prior normal probability, which represents the confidence level of the health state data and equals to ~δ=1−δ, δ is the significance level [9].

Since the number of training samples n is an integer less than infinity and Assumption 3.1 is introduced, we have

Then 0<P(xi|N)<1 for any xi∈X. There must be a positive value ϱ that satisfies

are probability distributions (pdf or ds), which are fitted by training data. Thus the more

When P(N,xi) of xi is obtained, then f(xi) is computed as

where ln(⋅) is the natural logarithmic function.

Compared to P(N,xi), f(xi) obtained in equation (8) is more sensitive to faulty instance.

Proof. According to Theorem 1, there must be a lower bound α(0<α<1) that satisfies P(N,xi)∈[α,1) for normal data xi. When 0<z<1, the natural logarithmic function lnz monotonically increases, the derivative ∂lnz∂z=1z always satisfy that 1z>1. Fault data xf often deviates more from the statistical characteristics of X. Then we have 0<P(N,xf)<α. The detection performance is mainly reflected in the recognition ability of fault in the neighborhood U(α,ϵ) of α, where U(α,ϵ)={P(N,xi)|α−ϵ<P(N,xi)<α+ϵ}. Since 0<α−ϵ<P(N,xi)<α+ϵ<1, so f(xi) is more sensitive to faulty instance than P(N,xi). ∎

Let Ψ=ln(dcΠjc=1Pc(xjc|N)φjcdbΠjb=1Pb(xjb|N)φjb), it can be learned that

Considering equation (2), we have

where ~ηjb=1−ηjb. According to equation (1), the following equation can be obtained that

For the collected training samples X, the monitoring statistics s are computed as

where si is the statistic of xi.

When the statistics s of X are obtained, the control limit slim can be got with the significance level δ by KDE [25], δ=0.01 in this paper. In online detection, the statistic sa of arriving sample xa is computed by equation (13) and (3.1). Then the state of xa is determined through the monitoring strategy:

The model described in 3.1 mainly involves the estimation of parameters μj, σj, ηj, and φj. μj, σj and ηj can be obtained through maximum likelihood estimation (MLE) [6].

The practical data is usually correlated and variables that are more related to other variables are usually more sensitive when abnormalities occur [33]. So each variable is assigned with the different weight φj. The calculation of φj involves mutual information (MI) M(xj,xj′) of continuous and binary variables. In order to estimate MI of hybrid variables, x′j is constructed as follows if xj is continuous variable.

If xj is a continuous variable, x′j is constructed as

where [⋅] is Iverson brackets. If the condition xji>μj is true, it returns 1, otherwise it returns 0.

Definition 2 makes it possible to characterize the correlation between hybrid variables. Then x′j instead of xj is used to compute MI. However, the process of equation (19) brings the calculation error of MI between continuous variables.

Proof. For continuous variables xj and xj′, the joint probability function of xj and xj′ is

E(x′jx′j′) can also be obtained by

[7] M(xj,xj′) is the MI of xj and xj′. ρ is the Pearson correlation coefficient between xj and xj′. Then

If xj and xj′ are continuous variables, xj and xj′ obey Gaussian distributions N(μj,(σj)2) and N(μj′,(σj′)2) respectively, x′j and x′j′ are constructed by equation (19), the calculation error of MI is

Proof. According to Lemma 1, we have

Substituting equation (29) into equation (27), it can be learned that

where xji is the value at time i of xj.

For binary variables xj and xj′, P(xj,xj′) can be denoted as

For binary variables xj and xj′, P(xj,xj′) is obtained as

The likelihood function is