In this letter, we focus on the hybrid precoding (HP) design for the reconfigurable intelligent surface (RIS) aided multi-user (MU) millimeter wave (mmWave) communication systems. Specifically, we aim to minimize the mean-squared-error (MSE) between the received symbols and the transmitted symbols by jointly optimizing the analog-digital HP at the base-station (BS) and the phase shifts (PSs) at the RIS, where the non-convex element-wise constant-modulus constraints for the analog precoding and the PSs are tackled by resorting to the gradient-projection (GP) method. We analytically prove the convergence of the proposed algorithm and demonstrate the desirable performance gain for the proposed design through numerical results. 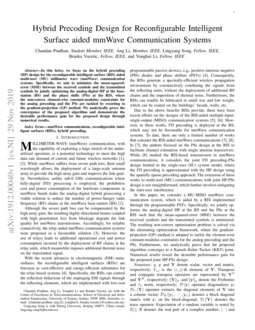 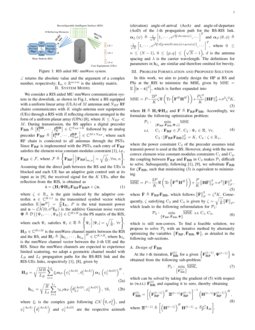 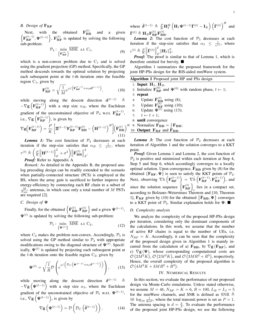 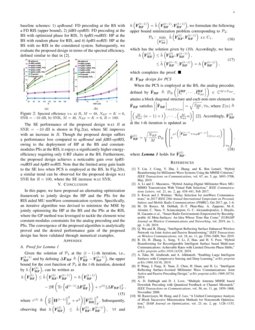 In this paper, we focus on the phenomenon of beam misalignment in Millim...
Chandan Pradhan, et al. ∙

Optimization of RIS-aided MIMO Systems via the Cutoff Rate

MILLIMETER-WAVE (mmWave) communication, with the capability of exploiting a large stretch of the underutilized spectrum, is a potential technology to meet the high data rate demand of current and future wireless networks [1, 2]. While mmWave suffers from severe path loss, their small wavelength allows the deployment of a large-scale antenna array to provide the high array gain and improve the link quality. Nevertheless, unlike sub-6 GHz communications where fully-digital (FD) processing is employed, the prohibitive cost and power consumption of the hardware components in mmWave bands make the analog-digital hybrid processing a viable solution to reduce the number of power-hungry radio frequency (RF) chains at the mmWave base-station (BS) [1].

Although the severe path loss can be compensated by the high array gain, the resulting highly-directional beams coupled with high penetration loss from blockage degrade the link quality for mmWave transmissions. Accordingly, for reliable connectivity, the relay-aided mmWave communication systems were proposed as a favourable solution [3]. However, the use of relays leads to additional operational cost and power consumption incurred by the deployment of RF chains at the relay units, which meanwhile imposes additional thermal noise on the transmitted signal.

With the recent advances in electromagnetic (EM) meta-surfaces, the reconfigurable intelligent surfaces (RISs) are foreseen as cost-effective and energy-efficient substitutes for the relay-based systems [4]. Specifically, the RISs can control the reflection behaviour of the impinging EM signals through the reflecting elements, which are implemented with low-cost programmable passive devices, e.g., positive-intrinsic-negative (PIN) diodes and phase shifters (PSTs) [4]. Consequently, the RISs generate a spectrally-efficient wireless propagation environment by constructively combining the signals from the reflecting units, without the deployment of additional RF chains and the imposition of thermal noise. Furthermore, the RISs can readily be fabricated in small size and low weight, which can be coated on the buildings’ facade, walls, etc.

, the authors focused on the PSs design at the RIS to facilitate channel estimation with single antenna transceivers. While

[8] studied the RIS-based transmission in mmWave communications, it considers the joint FD precoding-PSs design limited to the single-user (SU) system model, where the FD precoding is approximated with the HP design using the spatially sparse precoding approach. The extension of these works to multi-user (MU) communications with joint HP-PSs design is not straightforward, which further involves mitigating the inter-user interference.

In this paper, we consider a MU-MISO mmWave communication system, which is aided by a RIS implemented through the programmable PSTs. Specifically, we jointly optimize the analog-digital HP at the BS and the PSs at the RIS such that the mean-squared-error (MSE) between the received symbols and the transmitted symbols is minimized. The resulting non-convex optimization problem is solved via the alternating optimization framework, where the gradient-projection (GP) method is adopted to tackle the element-wise constant-modulus constraints for the analog precoding and the PSs. Furthermore, we analytically prove that the proposed algorithm converges to a Karush–Kuhn–Tucker (KKT) point. Numerical results reveal the desirable performance gain for the proposed joint HP-PSs design.

Yi,j is the (i,j)-th element of Y; Transpose and conjugate transpose operators are represented by YT and YH, respectively; \normYF and \normy2 denote the Frobenius and ℓ2 norm, respectively; D(y) operator diagonalizes y; DC(Y) operator extracts the diagonal elements of Y into a column vector; DB{y1,⋯,yn} denotes a block diagonal matrix with yi on the block-diagonal; Tr{Y}

denotes the trace operator; Expectation of a random variable is noted by

We consider a RIS aided MU mmWave communication system in the downlink, as shown in Fig.1, where a BS equipped with a uniform linear array (ULA) of M antennas and NRF RF chains communicates with K single-antenna user equipments (UEs) through a RIS with R reflecting elements arranged in the form of a uniform planar array (UPA) [8], where K≤NRF≪M. During transmission, the BS applies a digital precoder FBB≜[fBB1,⋯,fBBK]∈CNRF×K followed by an analog precoder FRF≜[fRF1,⋯,fRFNRF]∈CM×NRF, where each RF chain is connected to all antennas through the PSTs. Since FRF is implemented with the PSTs, each entry of FRF satisfies the element-wise constant-modulus constraint [1], i.e., FRF∈F, where F≜{FRF∣∣∣∣∣[FRF]m,n∣∣=√1M,∀m,n}. Assuming that the direct path between the BS and the UEs is blocked and each UE has an adaptive gain control unit at its input as in [9], the received signal for the K UEs, after the reflection from the RIS, is obtained as

where ζ∈R+ is the gain induced by the adaptive controller. s∈CK×1 is the transmitted symbol vector which satisfies E[ssH]=PKIK, P is the total transmit power and n∼CN(0,σ2IK) is the additive Gaussian noise vector. Ψ≜D({Ψ1,⋯,ΨR})∈CR×R is the PS matrix of the RIS, where each Ψr satisfies Ψr∈R≜{Ψr∣∣∣|Ψr|=√1R,∀r}. HB∈CR×M is the mmWave channel matrix between the RIS and the BS, and HI≜[hI1,⋯,hIK]H∈CK×R, where hIk is the mmWave channel vector between the k-th UE and the RIS. Since the mmWave channels are expected to experience limited scattering, we adopt a geometric channel model with LB and LI propagation paths for the BS-RIS link and the RIS-UEs links, respectively [1, 8], given by

In this work, we aim to jointly design the HP at BS and PSs at the RIS to minimize the MSE, given by MSE=E[\norms−^s2], which is further expanded into

where H≜HIΨHB and F≜FRFFBB. Accordingly, we formulate the following optimization problem:

where the power constraint C3 of the precoder assumes total transmit power is used at the BS. However, along with the non-convex element-wise constant-modulus constraints C1 and C2, the coupling between FRF and FBB in C3 makes P1 difficult to solve. Subsequently, following [1, 9], we substitute ¯FBB for ζFBB, such that minimizing (3) is equivalent to minimizing

where ¯F≜FRF¯FBB, which follows \norm¯F2F=ζ2K. Consequently, ζ satisfying C3 and C4 is given by ζ=√1K\norm¯FF, which leads to the following reformulation for P1:

which is still non-convex. To find a feasible solution, we propose to solve P2 with an iterative method by alternately optimizing the variables {FRF,¯FBB,Ψ}, as detailed in the following sub-sections.

which can be solved by taking the gradient of (5) with respect to (w.r.t.) ¯F(t)BB and equating it to zero, thereby obtaining

Next, with the obtained F(t)BB and a given {F(t−1)RF,Ψ(t−1)}, F(t)RF is updated by solving the following sub-problem:

which is a non-convex problem due to C1 and is solved using the gradient projection (GP) method. Specifically, the GP method descends towards the optimal solution by projecting each subsequent point at the t-th iteration onto the feasible region C1, given by

while moving along the descent direction d(t−1)≜−∇g(F(t−1)RF) with a step size αB, where the Euclidean gradient of the unconstrained objective of P4 w.r.t. F(t−1)RF, i.e., ∇g(F(t−1)RF), is given by

Proof: Refer to Appendix -A

Remark: As detailed in the Appendix -B, the proposed analog precoding design can be readily extended to the scenario when partially-connected structure (PCS) is employed at the BS, where the array gain is sacrificed to further improve the energy-efficiency by connecting each RF chain to a subset of MNRF antennas, in which case only a total number of M PSTs are required [2].

Finally, for the obtained {¯F(t)BB,F(t)RF} and a given Ψ(t−1), Ψ(t) is updated by solving the following sub-problem:

where C2 makes the problem non-convex. Accordingly, P5 is solved using the GP method similar to P4 with appropriate modifications owing to the diagonal structure of Ψ(t). Specifically, Ψ(t) is updated by projecting each subsequent point at the t-th iteration onto the feasible region C2, given by

Lemma 2: The cost function of P5 decreases at each iteration if the step-size satisfies that αI≤1ς(t), where ς(t)≜PK\norm¯Γ(t)2F\normHI2F.

Proof: The proof is similar to that of Lemma 1, which is therefore omitted for brevity. ■

Algorithm 1 summarizes the proposed framework for the joint HP-PSs design for the RIS-aided mmWave system.

Lemma 3: The cost function of P2 decreases at each iteration of Algorithm 1 and the solution converges to a KKT point.

Proof: Given Lemma 1 and Lemma 2, the cost function of P2 is positive and minimized within each iteration at Step 4, Step 5 and Step 6, which accordingly converges to a locally optimal solution. Upon convergence, ¯FBB given by (8) for the obtained {FRF,Ψ} is seen to satisfy the KKT points of P2. Next, observing ∇h(F(t−1)RF)=∇~h(F(t−1)RF;F(t−1)RF), and since the solution sequence {F(t)RF}t lies in a compact set, according to Bolzano–Weierstrass Theorem and [10, Theorem 1], FRF given by (10) for the obtained {¯FBB,Ψ} converges to a KKT point of P2. Similar explanation holds for Ψ. ■

In this section, we evaluate the performance of our proposed design via Monte-Carlo simulations. Unless stated otherwise, we assume M=48, NRF=K=6, R=100, LB=LI=5 for the mmWave channels, and SNR is defined as SNR≜10log101Kσ2, where the total transmit power is set as P=1. The antenna spacing is d=λ2. To evaluate the performance of the proposed joint HP-PSs design, we use the following baseline schemes: 1) upBound: FD precoding at the BS with a FD RIS (upper bound), 2) fdBS-optRIS: FD precoding at the BS with optimized phase for RIS, 3) hpBS-rndRIS: HP at the BS with random phase for RIS, and 4) hpBS-noRIS: HP at the BS with no RIS in the considered system. Subsequently, we evaluate the proposed design in terms of the spectral efficiency, defined similar to that in [2].

In this paper, we have proposed an alternating optimization framework to jointly design the HP and the PSs for the RIS aided MU mmWave communication systems. Specifically, an iterative algorithm was devised to minimize the MSE by jointly optimizing the HP at the BS and the PSs at the RIS, where the GP method was leveraged to tackle the element-wise constant-modulus constraints for the analog precoding and the PSs. The convergence of the proposed algorithm is analytically proved and the desired performance gain of the proposed design has been validated through numerical examples.

-a Proof for Lemma 1

which has the solution given by (10). Accordingly, we have

-B FRF design for PCS

When the PCS is employed at the BS, the analog precoder, defined by ~FRF≜DB([~fRF1,⋯,~fRFNRF])∈CM×NRF, attains a block diagonal structure and each non-zero element in ~FRF satisfies ∣∣[~FRF]m∈I(n),n∣∣=√NRFM,∀n, where I(n)≜[(MNRF(n−1)+1),⋯,(MNRFn)] [2]. Accordingly, ~F(t)RF at the t-th iteration is updated as