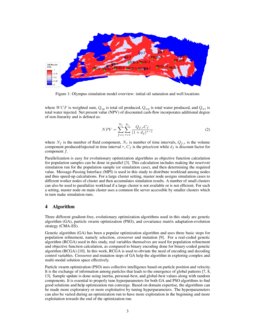 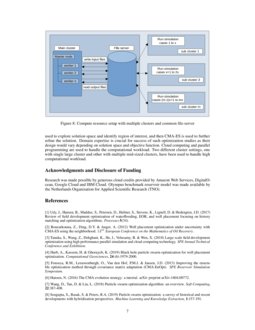 On the Performance of Metaheuristics: A Different Perspective

Influence of Initialization on the Performance of Metaheuristic Optimizers

A new technique of global optimization and its applications in particula...
Homayoun Valafar, et al. ∙

Oilfield planning and operations related decisions such as well placement and production settings have direct impact on cost and revenue for any given project. Hence, field development planning is done to maximize fluid recovery or net present value of cash flow, and is often accomplished using reservoir simulation studies. Simulation results are used to compare the performance of various well configuration and controls. Optimization algorithms are used in a workflow to search for well settings which maximize return on investment [1]. Search involves running thousands of reservoir simulation run for a range of possible solutions and identifying a few solutions of interest for further deliberations.

Computational requirement of such oilfield well design and control study is quite high, and hence commercial cloud computing is used to handle workload. Parallel programming is used to distribute computational workload among nodes of a large cluster. Two different computational setup are used, one in which a single cluster with a large number of cores is used, and another in which multiple mid-sized clusters are used with a common file server.

The main contributions of this work are:

Olympus benchmark case is a synthetic simulation model based on a typical North Sea offshore oilfield, and is used in this work to compare the effectiveness of different optimization algorithms [11]. Field is a 9km by 3km by 50m in size with minor faults and limited aquifer support. Subsurface uncertainty is captured by 50 realizations with different permeability, porosity, net-to-gross and initial water saturation, of which only 10 random realizations are used in this work to reduce computational requirement. GA and PSO optimization algorithms are first tested for ensemble of 10 realizations, and then going forward a representative realization is used for the remaining studies. A realization in such studies stands for a random simulation model, while ensemble of realizations is often used to capture subsurface uncertainty.

Simulation model has 11 production wells and 7 injection wells which are all on bottom-hole pressure (BHP) control (Figure 1). For the optimization study, each well’s BHP control setting is changed independently at four different pre-defined times during the 20 year simulation period. Thus, there are total 72 different control variables defined as continuous real parameter which can take any value within a given range.

Two different objective functions are used, one as the weighted sum of cumulative fluid production/injection while second as the net present value of discounted cash-flow [1, 14]. This is done to have a rigorous analysis by encoding varying degree of non-linearity among the two objective functions. Weighted sum of cumulative fluid (WCF) is defined as:

where Nf is the number of fluid component, Nτ is number of time intervals, Qf,τ is the volume component produced/injected in time interval τ, Cf is the price/cost while df is discount factor for component f.

Parallelization is easy for evolutionary optimization algorithms as objective function calculation for population samples can be done in parallel [3]. This calculation includes making the reservoir simulation run for the population sample (or simulation case), and then determining the required value. Message-Passing Interface (MPI) is used in this study to distribute workload among nodes and thus speed-up calculations. For a large cluster setting, master node assigns simulation cases to different worker nodes of cluster and then accumulates simulation results. A number of small clusters can also be used to parallalize workload if a large cluster is not available or is not efficient. For such a setting, master node on main cluster uses a common file server accessible by smaller clusters which in turn make simulation runs.

Genetic algorithm (GA) has been a popular optimization algorithm and uses three basic steps for population refinement, namely selection, crossover and mutation [9]. For a real-coded genetic algorithm (RCGA) used in this study, real variables themselves are used for population refinement and objective function calculation, as compared to binary encoding done for binary-coded genetic algorithm (BCGA) [10]. In this work, RCGA is used to obviate the need of encoding and decoding control variables. Crossover and mutation steps of GA help the algorithm in exploring complex and multi-modal solution space effectively.

Covariance matrix adaptation - evolution strategy (CMA-ES), on the other hand, is a stochastic population-based optimization approach where population is updated using weighted mean of samples from the previous generation and a random draw from a multivariate normal distribution [5, 6]. Next, parameters of multivariate normal distribution are updated using objective function evaluations. CMA-ES attempts to learn a second-order model of the underlying objective function and follows a natural gradient approximation of the expected fitness, similar to the approximation of the inverse Hessian matrix in Quasi-Newton methods [6, 18]. For multi-modal functions, where local optima cannot be interpreted as perturbations to an underlying convex (unimodal) topology, its performance can strongly decrease.

In continuous domains, the volume of search space grows exponentially with dimensions, and is known as the curse of dimensionality. This phenomenon causes a population size that is capable of adequate search space coverage in low dimensional search spaces to degrade into sparse coverage in high dimensional search spaces. GA and PSO algorithms work well for a problem with smaller number of control variables (or dimensions), but have problem converging when the number of control variables increase [12, 17]. To demonstrate this, both GA and PSO are used for solving Rastrigin function with varied number of dimensions. Rastrigin function has global minimum at zeros for any given number of dimensions and the associated cost is also zero. Cost is calculated as:

where d is the number of dimensions, xi is the value along dimension i, and f is the cost. As the dimensionality increases, both GA and PSO require larger population size and iterations, but still do not manage to converge to the global minimum (Table 1, Figure 2). While CMA-ES is not very effective for multi-modal problems, it has been found to have excellent convergence properties for unimodal problems. Thus once GA and PSO algorithms have established the region of interest, CMA-ES can be used to achieve convergence or further improvement. In general, effectiveness of any optimization algorithm depends on the problem class under consideration, and is commonly known as the no free lunch theorem for optimization [19].

In this work, GA and PSO are each first used with ensemble of 10 realizations as well as a single representative realization to establish their efficacy with such optimization problems. Going forward, optimization studies are done only for single representative model in order to cut down on computational cost. For using two optimization methods in a hybrid mode, one optimization algorithm is first allowed to run for a number of generations, and then second algorithm takes over. Two hybrid approaches, GA-CMA-ES and PSO-CMA-ES, are tested and compared with standalone GA and PSO algorithms [14, 15, 16, 18].

Olympus model has 11 producer wells and 7 injector wells, all on bottom-hole pressure (BHP) constraint (Figure 1). Constraints can be changed independently for each well at four predefined times giving a total of 72 control variables. Well control settings for an ensemble of 10 realizations as well as a single representative realization are first optimized using GA, and then steps are repeated using PSO. Table 2 shows related parameter values for the optimization runs. A discount factor of 0.08 was used for all fluid components in NPV calculation. For ensemble case, all 10 realizations (or simulation models) are simulated for any given population sample and results are averaged. As can be seen in Figures 4 and 4, both GA and PSO algorithms are able to optimize well control settings and yield higher weighted cumulative fluid as compared to the default case. As sampling is randomized in both the algorithms, every optimization run will proceed in unique fashion. Thus multiple optimization runs are required for comparing different algorithms. Going forward, only single representative reservoir model is optimized to cut down on computational requirement.

To further validate algorithm efficacy, objective function is next changed to net present value (NPV) of discounted cash-flow, and the results for GA and PSO based optimization runs are shown in Figure 5. Again algorithms seem to be effective in handling such simulation based oil production optimization problem. As compared to weighted sum of cumulative fluid (WCF) based optimization, NPV based optimization yields muted increase over default/base case because of the discounting.

Hybrid optimization run is made by transferring the resulting population from one algorithm to the next as its starting population for further improvement. Total 6000 simulation runs are made for such studies, out of which first 4000 runs (or 100 generations) are done using primary algorithm followed by 2000 runs (or 50 generations) using secondary algorithm. Two different hybrid optimization settings are: GA followed by CMA-ES (GA-CMA-ES) and PSO followed by CMA-ES (PSO-CMA-ES). Once region of interest is found using GA or PSO, CMA-ES algorithm further refines the solution as it is a better algorithm for local exploitation. Figures 7 and 7 show that CMA-ES is able to further improve upon the solution, and thus GA-CMA-ES and PSO-CMA-ES approach of hybrid optimization is better as compared to standalone GA or PSO. There is a marked jump in objective function value after 4000 runs when CMA-ES takes over from GA or PSO. It needs to be mentioned that CMA-ES does not have good exploratory mechanism for multi-modal solution space, and hence it does not perform as good as GA or PSO in standalone mode. Domain expertise is crucial for success of such optimization studies as their design would vary depending on underlying solution space and objective function.

Population based algorithms can be easily programmed in parallel mode with objective function for each sample being calculated using a separate node. In the calculation of objective function for a given population sample, compute intensive step is making the reservoir simulation run. Either a large cluster can be used to divide workload among cores, or multiple mid-size clusters can be used with a common file server. By reading from and writing to a common file server (Figure 8), multiple clusters can be used to carry-out compute intensive simulation runs, thus reducing turn-around time.

Evolutionary algorithms are efficient at solving oilfield well control optimization problem. Two such algorithms are used in hybrid mode to explore multi-modal solution space and attain convergence. GA-CMA-ES and PSO-CMA-ES hybrid optimization approach perform better as compared to using GA or PSO for such optimization problem. For the hybrid optimization, GA or PSO algorithm is first used to explore solution space and identify region of interest, and then CMA-ES is used to further refine the solution. Domain expertise is crucial for success of such optimization studies as their design would vary depending on solution space and objective function. Cloud computing and parallel programming are used to handle the computational workload. Two different cluster settings, one with single large cluster and other with multiple mid-sized clusters, have been used to handle high computational workload.

[12] Chen, S., Montgomery, J. & Bolufé-Röhler, A. (2015) Measuring the curse of dimensionality and its effects on particle swarm optimization and differential evolution. Appl Intell, 42:514-526.