Neural architecture is a purely numeric framework, which fits the data as a continuous function. However, lacking of logic flow (e.g. if, for, while), traditional algorithms (e.g. Hungarian algorithm, A^* searching, decision tress algorithm) could not be embedded into this paradigm, which limits the theories and applications. In this paper, we reform the calculus graph as a dynamic process, which is guided by logic flow. Within our novel methodology, traditional algorithms could empower numerical neural network. Specifically, regarding the subject of sentence matching, we reformulate this issue as the form of task-assignment, which is solved by Hungarian algorithm. First, our model applies BiLSTM to parse the sentences. Then Hungarian layer aligns the matching positions. Last, we transform the matching results for soft-max regression by another BiLSTM. Extensive experiments show that our model outperforms other state-of-the-art baselines substantially. 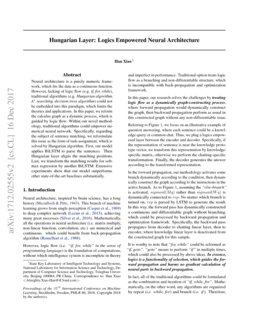 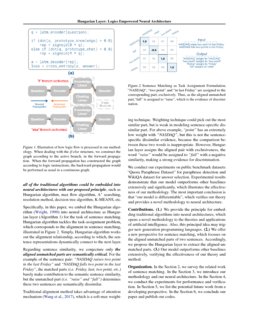 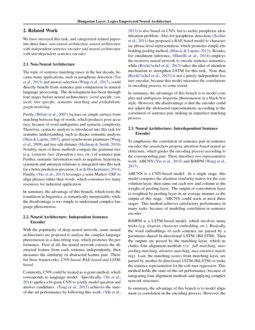 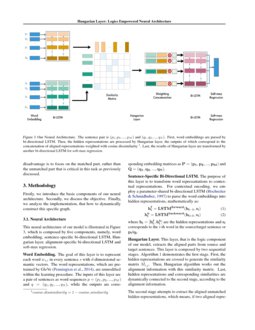 Paraphrase identification is an important topic in artificial intelligence and this task justifies whether two sentences expressed in various forms are semantically similar, Chitra & Rajkumar (2016). For example, “On Sunday, the boy runs in the yard” and “The child runs outside at the weekend” are identified as paraphrase. This task directly benefits many industrial applications, such as plagiarism identification Chitra & Rajkumar (2016), machine translation Kravchenko (2017) and removing redundancy questions in Quora website Wang et al. (2017). Recently, there emerge many methods, such as ABCNN Yin et al. (2015), Siamese LSTM Wang et al. (2017) and L.D.C Wang et al. (2016b).

Traditional alignment methods take advantage of attention mechanism Wang et al. (2017), which is a soft-max weighting technique. Weighting technique could pick out the most similar/dissimilar parts, but is weak in modeling the aligned unmatched parts, which are the crucial evidence to identify paraphrase. For the input sentences in Figure 1, the weight between “Sunday” and “run” is lower than the weight between “yard” and “inside”, but the former weight is not the evidence of paraphrase/non-paraphrase, because the former two words that are most dissimilar should not be aligned for an inappropriate comparison.

To extract the aligned unmatched parts, in this paper, we embed Hungarian algorithm Wright (1990) into neural architecture as Hungarian layer (Algorithm 1). Illustrated in Figure 1, the alignment in sentence matching could be formulated as the task-assignment problem, which is tackled by Hungarian algorithm. Simply, Hungarian algorithm works out the theoretically optimal alignment relationship in an exclusive manner and the exclusiveness characterizes the aligned unmatched parts. For the example in Figure 1, because Hungarian layer allocates the aligned pairs with exclusiveness, the matched parts (i.e (Sunday, weekend), (boy, child), run) are aligned firstly, then the word “yard” would be assigned to the word “inside” with a negative similarity, making a strong evidence for discrimination.

Specifically, our model performs this task in three steps. First, our model applies BiLSTM to parse the input sentences into hidden representations. Then, Hungarian layer leverages the hidden representations to extract the aligned unmatched parts. Last, we apply cosine similarity to metric the aligned unmatched parts for a final discrimination. Regarding the training process of Hungarian layer, we modify the back-propagation algorithm in both directions. In the forward pass, Hungarian layer works out the alignment relationship, according to which, the computational graph is dynamically constructed, as demonstrated in Figure 3. Once the computational graph has been dynamically constructed, the backward propagation could be performed as usual in a conventional graph.

We conduct our experiments on the public benchmark dataset of “Quora Question Pairs” for the task of paraphrase identification. Experimental results demonstrate that our model outperforms other baselines extensively and significantly, which verifies our theory about the aligned unmatched parts and illustrates the effectiveness of our methodology.

Contributions. (1.) We offer a new perspective for paraphrase identification, which focuses on the aligned unmatched parts of two sentences. Accordingly, we propose the Hungarian layer to extract the aligned unmatched parts. The proposed method can achieve hard and exclusive alignments between two sequences, while we can learn parameters by end-to-end back-propagation. (2.) Our model outperforms other baselines extensively, verifying the effectiveness of our theory and method.

Organization. In Section 2, we survey the related work of paraphrase identification and dynamic differentiable computational graphs. In Section 3, we introduce our neural architecture. In Section 4, we conduct the experiments. In Section 5, we conclude our paper and publish our codes.

We have surveyed this task and categorized related papers into three lines.

The topic of paraphrase identification raises in the last decade. The development has been through four stages before neural architectures: word specific, syntactic tree specific, semantic matching and probabilistic graph modeling.

Firstly, Bilotti et al. (2007) focuses on simple surface-form matching between bag-of-words, which produces poor accuracy, because of word ambiguities and syntactic complexity. Therefore, syntactic analysis is introduced into this task for semantic understanding, such as deeper semantic analysis Shen & Lapata (2007), quasi-synchronous grammars Wang et al. (2009) and tree edit distance Heilman & Smith (2010). Notably, most of these methods compare the grammar tree (e.g. syntactic tree, dependency tree, etc.) of sentence pair. Further, semantic information such as negation, hypernym, synonym and antonym is integrated into this task for a better prediction precision, Lai & Hockenmaier (2014). Finally, Yao et al. (2013) leverages a semi-Markov CRF to align phrases rather than words, which consumes too many resources for industrial applications.

In summary, the advantage of this branch, which roots the foundation in linguistics, is semantically interpretable, while the disadvantage is too simple to understand complex language phenomenon.

With the popularity of deep neural network, some neural architectures are proposed to analyze the complex language phenomenon in a data-fitting way, which promotes the performance. First of all, the neural network extracts the abstracted features from each sentence independently, then measures the similarity of the abstracted feature pair. There list two frameworks: CNN-based and RAE-based.

Commonly, CNN could be treated as n-gram method, which corresponds to language model. Specifically,

In summary, the advantage of this branch is to model complex and ambiguous linguistic phenomenon in a black-box style. However, the disadvantage is that the encoder could not adjust the abstracted representations according to the correlation of sentence pair, making an imperfect matching process.

To emphasize the correlation of sentence pair in encoder, the researchers propose the attention-based neural architectures, which guide the encoding process according to the corresponding part. There introduce the representative methods: ABCNN Yin et al. (2015) and L.D.C Wang et al. (2017).

ABCNN is a CNN-based model. In a single stage, this model computes the attention similarity matrix for the convolution layer, then sums out each row and column as the weighs of pooling layer. The output of convolution layer is weighted by pooling layer in an average manner as the output of this stage. ABCNN could stack at most three stages. This method achieves satisfactory performance in many tasks, because of modeling correlation in sentence encoder. L.D.C model Wang et al. (2016b) is an attention-based method, which decomposes the hidden representations into similar and dissimilar parts, then respectively processes each parts to generate the final result. Notably, L.D.C is the state-of-the-art method.

In summary, the advantage of this branch is to model alignment or correlation in the encoding process. However, the disadvantage is to focus on the matched parts, rather than the unmatched parts, which are critical in this task as previously discussed.

First, we introduce the basic components of our neural architecture. Then, we analyze the training process of Hungarian layer, that how to dynamically construct the computational graph.

Word Embedding. The goal of this layer is to represent each word ws,i in every sentence s with d

-dimensional semantic vectors. The word representations, which are pre-trained by GloVe

where hi=[hfi,hbi] is the i-th hidden representation and si corresponds to the i-th word embedding in the source/target sentence or pi/qi.

Hungarian Layer. This layer, which is the matching component of our model, extracts the aligned unmatched parts from the source and target sentences. This layer is composed by two sequential stages.

The second stage attempts to extract the aligned unmatched parts by weighting the aligned hidden representations (ai,bi) from the first stage. Required by extracting the unmatched parts, if two aligned representations are matched, the weight for them should be small, otherwise, large dissimilarity leads to large weight. For this reason, we introduce cosine dissimilarity, mathematically as:

, which is a conventional procedure in neural natural language processing,

where y is the matching score, |⋅| is the length of vector and Rp/Rq is the corresponding source/target part of the final sentence representation R. Thus, our output ranges in [−1,+1], where +1 means the two sentences are similar/paraphrase, and −1 means otherwise. For further evaluation of accuracy, we also apply a threshold learned in the development dataset to binary the cosine similarity as paraphrase/non-paraphrase. Notably, the introduction of concatenation layer facilitates the inference and training of Hungarian layer.

In this section, we verify our model performance on the famous public benchmark dataset of “Quora Question Pairs”. First, we introduce the experimental settings, in Section 4.1. Then, in Section 4.2, we conduct the performance evaluation. Last, in order to further test our assumptions, that the aligned unmatched parts are semantically critical, we conduct a case study for illustration in Section 4.3.

We initialize the word embedding with 300-dimensional GloVe Pennington et al. (2014) word vectors pre-trained in the 840B Common Crawl corpus Pennington et al. (2014). For the out-of-vocabulary (OOV) words, we directly apply zero vector as word representation. Regarding the hyper-parameters, we set the hidden dimension as 150 for each BiLSTM. To train the model, we leverage AdaDelta Zeiler (2012)

as our optimizer, with hyper-parameters as moment factor

Dataset. Actually, to demonstrate the effectiveness of our model, we perform our experiments on the famous public benchmark dataset of “Quora Question Pairs” 111The url of the dataset: https://data.quora.com. For a fair comparison, we follow the splitting rules of Wang et al. (2017). Specifically, there are over 400,000 question pairs in this dataset, and each question pair is annotated with a binary value indicating whether the two questions are paraphrase of each other or not. We randomly select 5,000 paraphrases and 5,000 non-paraphrases as the development set, and sample another 5,000 paraphrases and 5,000 non-paraphrases as the test set. We keep the remaining instances as the training set.

We have tested L.D.C. and our model five times to evaluate the mean and variance, then perform the test for statistical significance.

We apply t-test and

Results. Our results are reported in Table 1. We can conclude that:

We have conducted a case study in the practical setting of “Quora Question Pairs” with our model for paraphrase identification. Illustrated in Figure 4, the slashed grids correspond to the aligned matched parts, while the crossed ones indicate the aligned unmatched parts. Notably, we mark the pairwise similarity below 0.3 as unmatched in this case study.

For the example of (a), there exist two input sentences: “What is your review of Hidden Figures -LRB- 2016 movie -RRB-” and “What are your impressions of Hidden Figures -LRB- 2017 movie -RRB-”. From our case analysis, most of the aligned parts are matched, while minor aligned unmatched parts are similar. Thus, our method justifies the two sentences as paraphrase. This is accorded to our assumption.

For the example of (b), there exist two input sentences: “Why is saltwater taffy candy imported in Austria” and “Why is salt water taffy candy unknown in Japan”. There are two unmatched parts that “imported/unknown” and “Austria/Japan”, which are conflicted. Thus, the case is classified as non-paraphrase.

For the example of (d), the two sentences are: “Is a(n) APK file just a hidden app” and “Where do APK files get stored in Android Studio”. As we know, there are too many conflicts in this case, making a very dissimilar score as non-paraphrase.

In summary, this case study justifies our assumption that “the aligned unmatched parts are semantically critical”.

In this paper, we leverage Hungarian algorithm to design Hungarian layer, which extracts the aligned matched and unmatched parts exclusively from the sentence pair. Then our model is designed by assuming the aligned unmatched parts are semantically critical. Experimental results on benchmark datasets verify our theory and demonstrate the effectiveness of our proposed method.