The goal of this study is to introduce a comprehensive gait database of 93 human subjects who walked between two end points during two different sessions and record their gait data using two smart phones, one was attached to right thigh and another one on left side of waist. This data is collected with intention to be utilized by deep learning-based method which requires enough time points. The meta data including age, gender, smoking, daily exercise time, height, and weight of an individual is recorded. this data set is publicly available. 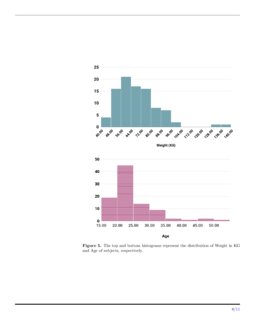 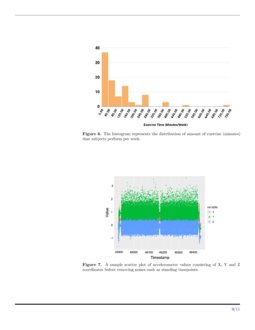 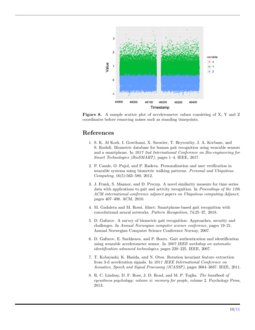 The goal of this study is to introduce a comprehensive gait database of 93 human subjects who walked between two end points during two different sessions and record their gait data using two smart phones, one was attached to right thigh and another one on left side of waist. This data is collected with intention to be utilized by deep learning-based method which requires enough time points. The meta data including age, gender, smoking, daily exercise time, height, and weight of an individual is recorded. this data set is publicly available.

Identification of individuals through biometric measures refers to the methods of recognizing an individual through his/her physiological (e.g., face, hand) or behavioral characteristics (e.g., gait). Gait, as a behavioral biometric modality is a useful and reliable approach that identifies individuals based on their walking pattern. Human authentication and identification through gait has become an appealing research area because of its applications in forensic science, surveillance, and security. Gait recognition is preferred over the other biometric identification and authentication techniques due to the following reasons:

On the other hand, individuals’ identification and authentication through gait patterns has its own limitations. The gait of an individual may be impacted by factors like drunkeness, clothing variation, and fatigue. These limitations could be addressed by combining gait modality with other biometric modalities to have a more reliable authentication or identification system [6]. According to a survey study by [6], gait recognition approaches can be categorized into three types: machine vision-based, floor sensor-based, and wearable sensor-based. Vision-based gait recognition systems can be impacted by weather conditions, lighting, and data noises. Floor-based systems need expensive floor sensors and they limit continuous monitoring of individuals. Wearable sensor-based systems, however, allow monitoring individuals’ walking patterns continuously and remotely over time. Moreover, wearable sensor-based approaches are less expensive and less affected by noise. Smartphones can provide high quality inertial measurements and they are widely being used. This property makes them invaluable for gait applications. In this paper, we are interested in human gait identification through smartphone inertial sensors’ data.

Designing automated human identification or authentication systems require a proper dataset. Among the publicly available datasets, the largest one was acquired by researchers at Osaka University (OU) [10]

. Although they constructed several datasets for three inertial sensors and a smartphone around the waist of subjects, and included high number of participants (744), they only recorded two very short data sequences per subject and the data collection was done in a controlled environment. Short sequence of data in this dataset limits the application of deep neural networks. Other publicly available datasets are including data from a much smaller number of participants. In the study done by

[3]., gait data was collected from 20 subjects using a mobile phone in their pocket. Subjects performed two 15-minute walk trials on two different days [3]. The most recent gait database was introduced by [4]. In their study, motion data was acquired from 50 subjects in five several acquisition sessions and five minutes of data collection per session. Android smartphones were used for data collection and worn in the right front pocket of the individuals trousers. All of the above-mentioned databases come with their own limitations and do not meet our requirements. Specifically, we collected gait data from 93 individuals using iPhone 6s, attached to the left waist and right thigh of the participants. Two acquisition sessions of about 320 meters (200 miles) were performed per subject. Participants were asked to walk with their comfortable speed. The sample frequency for collecting the raw inertial signals were 100. Compared with the existing databases, the advantages of this database are as follows:

This study was conducted by recruiting 93 individuals who walked with comfortable pace during two different sessions. In each session, two different smart phones (iPhone 6S) are installed to record the data, one on the left waist and another one in the right thigh as shown in the figure 4. Every subject during each session was walked a distance of 320 meters between two endpoints A and B forward and backward (a total of 640 meters for each session). The location of the experiment was the same for all the subjects with sea level of 0. For each individual, one smart phones was first installed near the left waist and then the other smart phone was installed on the right thigh. In order to remove the set up noises, the subject had to wait for 5 second after installing the smart phones and after 5 second, he/she started to walk from end point A to end point B. Once the subject arrived to point B, he/she turned around and waited for 5 second and then started to walk toward point A. After the subject arrived at point A, he/she waited for 5 seconds and then the smart phones are detached and data collection stopped. These 5 seconds interruptions are being used to identify the directions. The exact same experiment repeated for the second session. For capturing the data we used the SensorLog application (1.9.7 version) which is developed and tested for IOS framework. Additionally, subject’s meta data were collected containing age, weight, height, average daily amount of exercise, gender, and smoker/non-smoker information.

Every subject is associated with 4 different log files (each session contains two log files) except 19 subjects who did not attend for second session. Every file name has one of the following patterns:

Every log file contains 58 features that are internally captured and calculated using SensorLog app. These are the raw data. Figure 1 represents all the 58 features based on each category. Additionally an Excell file contain the meta data is provided for each subject.

As an example of application of the data, we present a general recurrent neural network framework (RNN) for gait biometric recognition. The accelerometer signals are typically sequential data which are appropriate to be analyzed by an RNN. Unlike the traditional gait biometrics being tackled by using handcrafted features which lead to complex computation and heavy reliance on experimental design, the proposed model can automatically learn the dynamic features and temporal dependencies from a short data window (

128 points) extracted from a sequence of raw accelerometer signals. We evaluated the model on the data set and the results show that the proposed model significantly outperforms the previous studies in this field, which in turn, indicates the quality of the data set.

Our model, referred to as GaitNet, is a 3-layer Gated Recurrent Unit (GRU) neural network with 64 units on each layer, which takes as inputs a fixed-sized sequence of raw gait points extracted by a sliding window approach. Each gait point is a 6-dimensional feature vector, consisting of

X,Y and Z coordinates collected from smart phones on both spots, denoted as Xlw,Ylw,Zlw,Xrp,Yrp and Zrp

. The model can automatically learn the dynamic features and temporal dependencies from the input gait data, and outputs a probability distribution over all classes. As the number of points that have been seen by the model increases, the model’s cell state becomes progressively more informed. Therefore, we are only interested in the prediction output at the last time step, when the full sequence has been observed. Fig.

2 shows the architecture of GaitNet.

All examples were randomly divided, using 80% for training, 10% for validation and another 10% for testing. We trained our GaitNet on 27,036 data windows of length 128 time steps for a total of 31,535 iterations using mini-batch gradient descent with learning rate 0.001. The batch size was set to 30

. A Softmax classifier was used to calculate the probability distribution over

classes and the model was trained by minimizing the cross-entropy loss between predicted probabilities and one-hot encoded target. The weights were then updated by an Adam (Adaptive Moment Estimation) optimizer with gradient clipping to control the exploding gradients problem. A dropout regularization with a rate of

0.5 was applied to each RNN cell to avoid overfitting. During training, the model was validated on the validation set every 200 iterations to monitor the convergence and overfitting problems. In addition, the validating result was also employed to pick the best model after training. Our model took approximately 5 hours to train on NVIDIA GTX 1080

A biometric recognition system can run in two different modes: identification or verification. We use Rank-1 identification rate (Rank-1 IR) and Equal Error Rate (EER) for the evaluation of biometric identification and verification performance, respectively. Our GaitNet model works as a multiclass classifier that can yield a class probability distribution for an input gait movement pattern of a person who is going to be identified. The decision of acceptance or rejection of a person is determined by a decision threshold to which the model compares the prediction probability. Rank-1 IR is a measure of the biometric identification performance that shows the percentage of correct identifications returned at the first place of a ranked list. The achieved Rank-1 IR for our model is 99.1%. In the verification scenario, the decision threshold must be adjusted according to the desired characteristics for the application considered. The equal error rate (EER) can be used to give a threshold independent performance measure of a biometric system. GaitNet achieves 0.31% EER. In Fig. 3, we also present the ROC curves to provide a more global overview of the biometric recognition performance. We plot the ROC curves in semilogarithmic scale (i.e., x axis in logarithmic scale) since low false acceptance values are of more interest, and the logarithmic scale better distinguishes values in this range.

We thank just about everybody who contributed in this study as a subject.