Recently, much progress has been made for self-supervised action recognition. Most existing approaches emphasize the contrastive relations among videos, including appearance and motion consistency. However, two main issues remain for existing pre-training methods: 1) the learned representation is neutral and not informative for a specific task; 2) multi-task learning-based pre-training sometimes leads to sub-optimal solutions due to inconsistent domains of different tasks. To address the above issues, we propose a novel action recognition pre-training framework, which exploits human-centered prior knowledge that generates more informative representation, and avoids the conflict between multiple tasks by using task-dependent representations. Specifically, we distill knowledge from a human parsing model to enrich the semantic capability of representation. In addition, we combine knowledge distillation with contrastive learning to constitute a task-dependent multi-task framework. We achieve state-of-the-art performance on two popular benchmarks for action recognition task, i.e., UCF101 and HMDB51, verifying the effectiveness of our method. 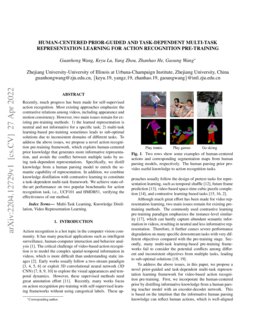 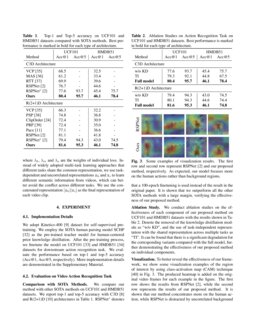 Video-based action recognition is one of the most popular topics in comp...
Yang Zhou, et al. ∙

Action recognition is a hot topic in the computer vision community. It has many practical applications such as intelligent surveillance, human-computer interaction and behavior analysis

[12]. The critical challenge of video-based action recognition is to model the complex spatial-temporal information in videos, which is more difficult than understanding static images [4]. Early works usually follow a two-stream paradigm [26, 7, 8, 34]

[14, 30, 3, 31] to explore the visual appearances and temporal dynamics. However, these supervised methods need great annotation effort [33]

. Recently, many works focus on action recognition pre-training with self-supervised learning frameworks without using categorical labels. These approaches usually follow the design of pretext tasks for representation learning, such as temporal shuffle

To address the above issues, in this paper, we propose a novel prior-guided and task-dependent multi-task representation learning framework for video-based action recognition pre-training. First, we incorporate the human-centered prior by distilling informative knowledge from a human parsing teacher model with an encoder-decoder network. This is based on the intuition that the informative human parsing knowledge can reflect human actions, which is well-aligned with the downstream action recognition objectives. An example is shown in Fig. 1 for a better demonstration. In addition, we also combine the contrastive learning with both appearance and motion consistency into a multi-task learning framework. To avoid the potential conflict from multiple tasks, task-dependent models are employed. The generated task-dependent representations are further combined for downstream tasks. The framework of our proposed method is demonstrated in Fig. 2. We conduct extensive experiments for action recognition on UCF101 and HMDB51 datasets and achieve state-of-the-art (SOTA) performance, verifying the effectiveness of our proposed method.

[24], permutation [23], predicting jigsaw puzzles [17], and contrastive learning strategies. Recently, the extension from image to video representation learning has become increasingly popular due to the richer temporal information of videos. Like representation learning for images, the self-supervised video representation learning also focuses on the design of pretext tasks yet with the extension of considering temporal consistency in video clips. For example, [9, 19, 36] attempt to shuffle the frame and clip order along the temporal dimension; [10] proposes a pretext task to predict future frames; [16] learns video features through designing space-time cubic puzzles, and [2] proposes the SpeedNet to predict the motion speed in videos. In addition, contrastive learning is also widely used in the design of pretext tasks. Specifically, [10] proposes a dense predictive coding method with contrastive loss for video frames; [28] exploits contrastive multi-view video coding with the inspiration by [29] for image coding; [4] proposes a relative contrastive speed perception task to learn the motion information of videos. However, the representation by self-supervised training may be not well-aligned with the objectives of downstream tasks, leading to severe performance degradation.

In this section, we present our prior-guided and task-dependent multi-task representation learning framework for video-based action recognition pre-training. We firstly describe how to incorporate the human-centered prior information by distilling informative knowledge from a human parsing teacher model with an encoder-decoder network, to enrich the semantic capability of the representation. Then, we combine knowledge distillation (KD) with video contrastive learning into a multi-task learning framework to boost the discrimination with fused task-dependent representations.

In the meanwhile, the prior representation is fed into a decoder gh(⋅) to generate a parsing segmentation as follows,

We assume both Ft and Fh are normalized feature maps after the softmax operation. Fh is supervised by the teacher model with the KL-divergence loss LKL as follow,

With the human prior knowledge distillation module and video contrastive module, we form a multi-task learning framework with the following total loss,

[3] dataset for self-supervised pre-training. We employ the SOTA human parsing model SCHP [20] as the pre-trained teacher model for human-centered prior knowledge distillation. After the pre-training process, we finetune the model on UCF101 [27] and HMDB51 [18] datasets for downstream action recognition task. We evaluate the performance based on top-1 and top-5 accuracy (Acc@1, Acc@5, respectively). More implementation details are demonstrated in the Supplementary Material.

Comparison with SOTA Methods. We compare our method with other SOTA methods on UCF101 and HMDB51 datasets. We report top-1 and top-5 accuracy with C3D [30] and R(2+1)D [31] architectures in Table 1. RSPNet∗

denotes that a 100-epoch finetuning is used instead of the result in the original paper. It is shown that we outperform all the other SOTA methods with a large margin, verifying the effectiveness of our proposed method.

Ablation Study. We conduct ablation studies on the effectiveness of each component of our proposed method on UCF101 and HMDB51 datasets with the results shown in Table 2. Denote the removal of the knowledge distillation module as “w/o KD”, and the use of task-independent representation with the shared representation across multiple tasks as “TI”. It can be found that there is a significant degradation for the corresponding variants compared with the full model, further demonstrating the effectiveness of our proposed method on individual components.

Visualization. To better reveal the effectiveness of our framework, we show some visualization examples of the region of interest by using class-activation map (CAM) technique [40] in Fig. 3. The produced heatmap is added on the original video frames for each example in the figure. The first row shows the results from RSPNet [4], while the second row represents the results of our proposed method. It is shown that our method concentrates more on the human action, while RSPNet is distracted by uncorrelated background regions. The visualization results demonstrate the validity of our motivation that incorporates human-centered prior knowledge for multi-task pre-training to learn discriminative representations. More visualization examples are included in Supplementary Material.

Acknowledgement. This work was supported by the National Natural Science Foundation of China under Grant 62106219.