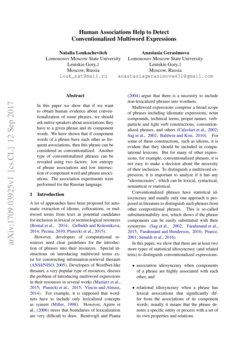 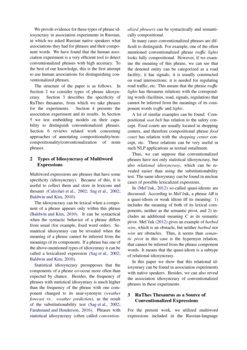 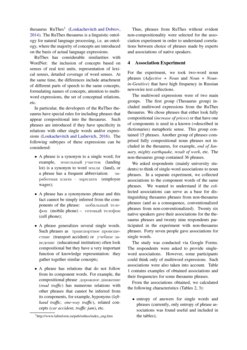 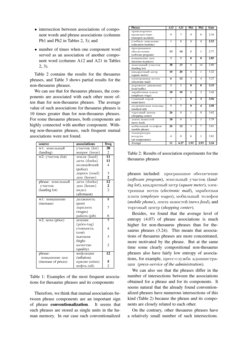 A lot of approaches have been proposed for automatic extraction of idioms, collocations, or multiword terms from texts as potential candidates for inclusion in lexical or terminological resources Bonial et al. (2014); Gelbukh and Kolesnikova (2014); Pecina (2010); Piasecki et al. (2015).

However, developers of computational resources need clear guidelines for the introduction of phrases into their resources. Special instructions on introducing multiword terms exist for constructing information-retrieval thesauri ANSI/NISO (2005). Developers of WordNet-like thesauri, a very popular type of resources, discuss the problem of introducing multiword expressions in their resources in several works Maziarz et al. (2015); Piasecki et al. (2015); Vincze and Almasi (2014). For example, it is supposed that wordnets have to include only lexicalized concepts as synsets Miller (1998). However, Agirre et al., Agirre et al. (2006) stress that boundaries of lexicalization are very difficult to draw. Bentivogli and Pianta Bentivogli and Pianta (2004) argue that there is a necessity to include non-lexicalized phrases into wordnets.

. For some of these constructions, such as idioms, it is evident that they should be included in computational lexicons. But for many of other expressions, for example, conventionalized phrases, it is not easy to make a decision about the necessity of their inclusion. To distinguish a multiword expression, it is important to analyze if it has any "idiosincrasies", which can be lexical, syntactical, semantical or statistical.

Conventionalized phrases have statistical idiosyncrasy and usually only one approach is proposed in literature to distinguish such phrases from other compositional phrases. This is so-called substitutionability test, which shows if the phrase components can be easily substituted with their synonyms Sag et al. (2002); Farahmand et al. (2015); Farahmand and Henderson (2016); Pearce (2001); Senaldi et al. (2016).

In this paper, we show that there are at least two more types of statistical idiosyncrasy (and related tests) to distinguish conventionalized expressions:

The structure of the paper is as follows. In Section 2 we consider types of phrase idiosyncrasy. Section 3 describes the specificity of RuThes thesaurus, from which we take phrases for the experiments. Section 4 presents the association experiment and its results. In Section 5 we test embedding models on their capability to distinguish conventionalized phrases. Section 6 reviews related work concerning approaches of annotating compositionality/non-compositionality/conventionalization of noun phrases.

2 Types of Idiosyncrasy of Multiword Expressions

Multiword expressions are phrases that have some specificity (idiosyncrasy). Because of this, it is useful to collect them and store in lexicons and thesauri Calzolari et al. (2002); Sag et al. (2002); Baldwin and Kim (2010).

The idiosyncrasy can be lexical when a component of a phrase appears only within this phrase Baldwin and Kim (2010). It can be syntactical when the syntactic behavior of a phrase differs from usual (for example, fixed word order). Semantical idiosynrasy can be revealed when the meaning of a phrase cannot be inferred from the meanings of its components. If a phrase has one of the above-mentioned types of idiosynrasy it can be called a lexicalized expression Sag et al. (2002); Baldwin and Kim (2010).

Statistical idiosyncrasy presupposes that the components of a phrase co-occur more often than expected by chance. Besides, the frequency of phrases with statistical idiosynrasy is much higher than the frequency of the phrase with one component changed to its near-synonym (weather forecast vs. weather prediction), as the result of the substitutionability test Sag et al. (2002); Farahmand and Henderson (2016). Phrases with statistical idiosyncrasy (often called conventionalized phrases) can be syntactically and semantically compositional.

In many cases conventionalized phrases are difficult to distinguish. For example, one of the often mentioned conventionalized phrase traffic lights looks fully compositional. However, if we examine the meaning of this phrase, we can see that the denoted entity can be categorized as a road facility; it has signals; it is usually constructed on road intersections; it is needed for regulating road traffic, etc. This means that the phrase traffic lights has thesaurus relations with the correponding words (facilities, road, signals, regulation) that cannot be inferred from the meanings of its component words traffic and lights.

Thus, we can suppose that conventionalized phrases have not only statistical idiosyncrasy, but also relational idiosyncrasy, which can be revealed easier than using the substitutionability test. The same idiosynrasy can be found in unclear cases of possible lexicalized expessions.

In Mel’čuk (2012) so-called quasi-idioms are discussed. According to Mel’čuk, a phrase AB is a quasi-idiom or weak idiom iff its meaning: 1) includes the meaning of both of its lexical components, neither as the semantic pivot, and 2) includes an additional meaning C as its semantic pivot. Mel’čuk Mel’čuk (2012) gives an example of barbed wire, which is an obstacle, but neither barbed nor wire are obstacles. Thus, it seems than semantic pivot in this case is the hypernym relation, that cannot be inferred from the phrase component words. It means that the quasi-idiom is a subtype of relational idiosyncrasy.

In this paper we show that this relational idiosynrasy can be found in association experiments with native speakers. Besides, we can also reveal the association idiosyncrasy of conventionalized phrases in these experiments.

3 RuThes Thesaurus as a Source of Conventionalized Expressions

For the present work, we utilized multiword expressions included in the Russian-language thesaurus RuThes111http://www.labinform.ru/pub/ruthes/index_eng.htm Loukachevitch and Dobrov (2014)

. The RuThes thesaurus is a linguistic ontology for natural language processing, i.e. an ontology, where the majority of concepts are introduced on the basis of actual language expressions.

RuThes has considerable similarities with WordNet: the inclusion of concepts based on senses of real text units, representation of lexical senses, detailed coverage of word senses. At the same time, the differences include attachment of different parts of speech to the same concepts, formulating names of concepts, attention to multiword expressions, the set of conceptual relations, etc.

In particular, the developers of the RuThes thesaurus have special rules for including phrases that appear compositional into the thesaurus. Such phrases are introduced if they have specificity in relations with other single words and/or expressions Loukachevitch and Lashevich (2016). The following subtypes of these expressions can be considered:

Thus, phrases from RuThes without evident non-compositionality were selected for the association experiment in order to understand correlations between choice of phrases made by experts and associations of native speakers.

For the experiment, we took two-word noun phrases (Adjective + Noun and Noun + Noun-in-Genitive) that have high frequency in Russian newswire text collections.

The multiword expressions were of two main groups. The first group (Thesaurus group) included multiword expressions from the RuThes thesaurus. We chose phrases that either look fully compositional (increase of prices) or that have one of components is used in a known (=described in dictionaries) metaphoric sense. This group contained 15 phrases. Another group of phrases comprised fully compositional noun phrases not included in the thesaurus, for example, end of January, mighty earthquake, result of work, etc. The non-thesaurus group contained 36 phrases.

The study was conducted via Google Forms. The respondents were asked to provide single-word associations. However, some participants could think only of multiword expressions. Such associations were also taken into account. Table 1 contains examples of obtained associations and their frequencies for some thesaurus phrases.

From the associations obtained, we calculated the following characteristics (Tables 2, 3):

начало года (beginning of the year). It is highly associated with calendar months: January and September. For thesaurus phrases, a relatively high number of intersections between the phrase and component associations was revealed for most arguable thesaurus phrases: транспортное происшествие (transport accident) and температура воздуха (air temperature).

Thus, we can suppose that if a phrase has a low level of entropy of associations together with a small number of the same associations for the phrase and its components then it is also conventionalized.

We can introduce the threshold as 0.8*MaxEntropy of answers. MaxEntropy is the maximal entropy we can obtain if respondents give equiprobable answers. In the current experiment, the threshold is equal to 3.76 for thesaurus phrases and 3.89 for non-thesaurus phrases. In our experiment, such conventionalized phrases include учебное заведение (educational institute), повышение цен (increase in prices), дорожное движение (road traffic), главный герой (main hero), медицинская помощь (medical aid).

A a result, we can say that we have found two signs of phrase conventionalization in the association experiment described:

It is interesting to compare current results with the smaller amounts of associations. With this aim, we took the first 15 associations obtained for single words and phrases. The same above-mentioned thesaurus phrases have frequent mutual associations between components (that is, have association idiosyncrasy).

Phrases медицинская помощь (medical aid) and температура воздуха (air temperature) had entropy of associations more than 0.8*MaxEntropy. Only two non-thesaurus phrases had both low entropy (less than 0.8*MaxEntropy) and the low level of intersection between assotiations of the phrase and its components: финал лиги (league final) and начало года (beginning of the year). As a result, in this smaller experiment, the obtained associations can distinguish thesaurus phrases with accuracy more than 92%.

We used a Russian news collection (0.45 B tokens) and generated phrase and word embeddings with word2vec tool. For the phrases under consideration, we calculated cosine similarity between the phrase vector

v(w1w2) and the sum of normalized vectors of phrase components v(w1+w2) according to formula from Cordeiro et al. (2016a).

We experimented with different parameters of word2vec and evaluated them with MAP on our data. We found that the best word2vec model (200 dimensions, 3 word window size) achieved quite low value of MAP ( 0.391), which means that it is very difficult for current embedding models to differentiate thesaurus and non-thesaurus phrases in our experiment.

We can also calculate MAP for the same phrase list ordered accoring to the increased entropy of phrase associations. And here we obtain MAP equal to 0.642. Thus, entropy of human associations without accounting additional factors predicts thesaurus phrases significantly better than the embedding models.

Ramisch et al. Ramisch et al. (2016) asked respondents about the degree to which the meaning of an expression follows from its components: separately from each component and from both components in total. The authors of the paper stress that such indirect annotation provides reliable and stable data. However, this approach was confronted with difficulties concerning the inconsistency of the answers in some cases. For example, English speakers agreed on the level of head and head + modifier compositionality for phrase dirty word, but disagreed when judging the modifier: it was fully idiomatic for some, but others thought that the phrase just contained an uncommon sense of dirty.

try to formulate the procedural definition of multiword lexical units that should be included in the Polish wordnet so that lexicographers could apply these principles consistently. Then they asked linguists to classify phrases using this definition into three categories:

directed linguists to answer questions based on non-compositionality criteria of phrases including metaphoric character, hyponymy toward the syntactic head, ability to be paraphrased, non-separability, fixed word order, terminological register, etc. Then the answers were used to train the decision tree algorithm to predict inclusion or non-inclusion of an expression into the Polish wordnet. However, the obtained decision trees were different for the various phrase sets under analysis.

For Russian there are two large resources of human associations. The well-known Russian Association dictionary Karaulov et al. (1994) is currently obsolete. Another assoicaion-oriented project Sociation.org222http://sociation.org/ collected a lot of current Russian associations but it does not have associations for the phrases under analysis.

Practical conclusions from the above-described experiments and related work are as follows:

In this paper, we have shown that if we want to obtain human evidence about conventionalization of some phrases, we can ask native speakers about associations they have for a phrase and its component words.

In our opinion, developers of thesauri should consider the relational specificity (idiosynrasy) of multiword expressions, which can help them to decide on inclusion of specific phrases into their resources. Weird word co-occurrences with the phrase in comparison with its component contexts can be considered as an additional factor to detect conventionalized expressions in computational approaches.

This study is supported by Russian Scientific Foundation (project N16-18-02074).