Small object detection is challenging because small objects do not contain detailed information and may even disappear in the deep network. Usually, feeding high-resolution images into a network can alleviate this issue. However, simply enlarging the resolution will cause more problems, such as that, it aggravates the large variant of object scale and introduces unbearable computation cost. To keep the benefits of high-resolution images without bringing up new problems, we proposed the High-Resolution Detection Network (HRDNet). HRDNet takes multiple resolution inputs using multi-depth backbones. To fully take advantage of multiple features, we proposed Multi-Depth Image Pyramid Network (MD-IPN) and Multi-Scale Feature Pyramid Network (MS-FPN) in HRDNet. MD-IPN maintains multiple position information using multiple depth backbones. Specifically, high-resolution input will be fed into a shallow network to reserve more positional information and reducing the computational cost while low-resolution input will be fed into a deep network to extract more semantics. By extracting various features from high to low resolutions, the MD-IPN is able to improve the performance of small object detection as well as maintaining the performance of middle and large objects. MS-FPN is proposed to align and fuse multi-scale feature groups generated by MD-IPN to reduce the information imbalance between these multi-scale multi-level features. Extensive experiments and ablation studies are conducted on the standard benchmark dataset MS COCO2017, Pascal VOC2007/2012 and a typical small object dataset, VisDrone 2019. Notably, our proposed HRDNet achieves the state-of-the-art on these datasets and it performs better on small objects. 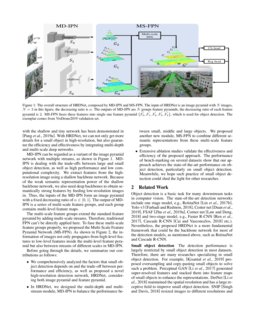 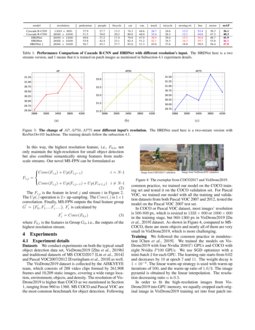 Object detection is challenging while it has widespread applications. With the advances of deep learning, object detection achieves the remarkable progress. According to whether the proposals are generated by an independent learning stage or directly and densely sample possible locations, object detection can be classified into two-stage or one-stage models. Compared to two-stage detectors

[cai2018cascade, fasterrcnn] one stage methods [retina, SSD] are less complex, therefore, it can run faster with some precision loss. While most existed successful methods are based on anchor mechanism, the recent state-of-the-art methods focus on anchor-free detection mostly, e.g. CornerNet [CornerNet], FCOS [tian2019fcos], FSAF [fsaf]. These CNN based detection methods are very powerful because it can create some low-level abstractions of the images like lines, circles and then ‘iteratively combine’ them into some objects, but this is also the reason that they struggle with detecting small objects.

Generally, the object detection algorithms mentioned above can achieve good performance, as long as the features extracted from the backbone network are strong enough. Usually, a huge and deep CNN backbone extracts multi-level features and then refine them with feature pyramid network (FPN). Most time, these detection models benefit from deeper backbone, while the deeper backbone also introduces more computation cost and memory usage.

MD-IPN can be regarded as a variant of the image pyramid network with multiple streams, as shown in Figure 1. MD-IPN is dealing with the trade-offs between large and small object detection, as well as high performance and low computational complexity. We extract features from the high-resolution image using a shallow backbone network. Because of the weak semantic representation power of the shallow backbone network, we also need deep backbones to obtain semantically strong features by feeding low-resolution images in. Thus, the inputs of the MD-IPN form an image pyramid with a fixed decreasing ratio of α∈[0,1]. The output of MD-IPN is a series of multi-scale feature groups, and each group contains multi-level feature maps.

Before going through the details, we summarize our contributions as follows:

Object detection is a basic task for many downstream tasks in computer vision. The state-of-the-art detection networks include one stage model, e.g., RetinaNet

[retina], Yolo-v3 [redmon2018yolov3], Center net [duan2019centernet], FSAF [fsaf], Corner net [CornerNet] and two-stage model, e.g., Faster R-CNN [fasterrcnn], Cascade R-CNN [cai2018cascade] etc.). Nevertheless, the proposed HRDNet is a more fundamental framework that could be the backbone network for most of the detection models, as mentioned above, such as RetinaNet and Cascade R-CNN.

To capture the semantic information of objects from different scales, multi-level features are commonly used for object detection. However, they have serious feature-level imbalance because they convey different semantic information. Feature Pyramid Network (FPN) [FPN] introduced a top-down pathway to transmit semantic information, alleviating the feature imbalance problem in some degree. Based on FPN, PANet [PANet] involved a bottom-up path to enrich the location information of deep layers. The authors of Libra R-CNN [Libra_RCNN] revealed and tried to deal with the sample level, feature level, and objective level imbalance issues. Pang et al. [Pang_2019_CVPR] proposed a light weighted module to produce featured image pyramid features to augment the output feature pyramid. While these methods only focus on multi-level features. Here, We solve the feature-level imbalance from a new angle, we proposed a new module called Multi-scale FPN to solve the imbalance not only from multi-level features but also from multi-scale feature groups.

1. To balance computation costs and variance of objects scales while keeping the performance of all the classes, we proposed the High-Resolution Detection Network (HRDNet). The HRDNet is a general concept that is compatible with any alternative detection method.

More specifically, HRDNet is designed with two novel modules, Multi-Depth Image Pyramid Network (MD-IPN) and Multi-Scale Feature Pyramid Network (MS-FPN). In MD-IPN, an image pyramid is processed by backbones with different depth, i.e., using deep CNNs for the low-resolution images while using shallow CNNs for the high-resolution images, as shown in Figure 1. After that, to fuse the multi-scale groups of multi-level features from MD-IPN, MS-FPN is proposed as a more reasonable feature pyramid architecture (Figure 2).

The MD-IPN is composed of N independent backbones with various depth to process the image pyramid. We term each backbone as a stream. HRDNet can be generalized to more streams, but to better illustrate the main idea, we mainly discuss the two-stream HRDNet and three-stream HRDNet. Figure 1 presents an example of three-stream HRDNet. Given an image I with resolution R, the high-resolution image (I0 with R) is processed by a stream of shallow CNN (S0), the lower-resolution images (I1 and I2 with αR and α2R, and α=0.5.) is processed by streams of deeper CNN (S1 and S2). Generally, we can build an image pyramid network with N independent parallel streams, Si,i={0,1,2,...,N−1}.

We use {Ii}N−1i=0 to represent the input images with different resolutions given the original image I0 with the highest resolution. The outputs of the multi scale image pyramid are N feature groups {Gi}N−1i=0. Each group Gi contains a set of multi-level features {Fi,j}, where i∈{0,1,2,...,N−1} is the multi-scale index and j∈{0,1,2,...,M−1} is the multi-level index. For example, in Figure 1, the value of N and M are 3,4, respectively, and the relation can be formulated as

In our proposed HRDNet, the MD-IPN generates multi-scale (different resolution) and multi-level (different hierarchy of features) features. To deal with the multi-scale hierarchy features, we also proposed the Multi-Scale FPN (MS-FPN). Different from FPN, semantic information propagates not only from high-level features to low-level features but also from deep stream (low-resolution) to shallow stream (high-resolution). Therefore, there are two directions for the computation of the multi-scale FPN. The basic operation in multi-scale FPN is same as traditional FPN, i.e., 1×1Convolution, 2× up-sampling and sum-up.

In this way, the highest resolution feature, i.e., F0,0, not only maintain the high-resolution for small object detection but also combine semantically strong features from multi-scale streams. Our novel MS-FPN can be formulated as

where F0,i is the features in Group G0, i.e., the outputs of the highest resolution stream.

The VisDrone2019 dataset is collected by the AISKYEYE team, which consists of 288 video clips formed by 261,908 frames and 10,209 static images, covering a wide range location, environment, objects, and density. The resolution of VisDrone2019 is higher than COCO as we mentioned in Section 1, ranging from 960 to 1360. MS COCO and Pascal VOC are the most common benchmark for object detection. Following common practice, we trained our model on the COCO training set and tested it on the COCO validation set. For Pascal VOC, we trained our model with all the training and validation datasets from both Pascal VOC 2007 and 2012, tested the model on the Pascal VOC 2007 test set.

We followed the common practice in mmdetection [chen2019mmdetection]. We trained the models on VisDrone2019 with four Nvidia 2080Ti GPUs and COCO with eight Nvidia P100 GPUs. We use SGD optimizer with a mini-batch 2 for each GPU. The learning rate starts from 0.02 and decreases by 10

. The image pyramid is obtained by the linear interpolation. The resolution decreasing ratio

In order to fit the high-resolution images from VisDrone2019 into GPU memory, we equally cropped each original image in VisDrone2019 training set into four patch images which are not overlapped. In this way, we obtained a new training set with such cropped images.

Same resolution as training is used for inference. The IOU threshold of NMS is 0.5, and the threshold of confidence score is 0.05. Without especially emphasizing, for the multi-scale test in our experiments, we use three scales.

4.2.1 The effect of image resolution for small object detection

(long edge) with 400 as the stride. Finally, HRDNet achieves the best performance when the resolution is

To further demonstrate that the performance improvement of HRDNet is not because of more parameters, we compared two-stream HRDNet with the ensemble of two single backbone models under the same experimental setting (Table 4). The ensemble models fuse the predicted bounding boxes and scores before NMS (Non-Maximum Suppression) and then perform NMS together. We found that the single backbone models with high-resolution input always perform better than those with low-resolution even it is processed by a stronger backbone. HRDNet performs better than the ensemble model, thanks to the novel multi-scale and multi-level fusion method. These results further prove that our designed MS-FPN is essential for HRDNet.

4.3 Comparison with the state-of-the-art methods

To demonstrate the advantage of our model and technical criterion, we also compare HRDNet with the most popular and state-of-the-art methods. Table 6 shows that our proposed HRDNet achieves the best performance on VisDrone2019 DET validation set. Notably, our model obtains more than 3.0% AP improvement with ResNeXt50+101 compared to HFEA using ResNet152 as their backbone.

Besides the experiments on VisDrone2019, we also conduct experiments on the COCO2017 test set to prove our method works well on a larger scale, complicated and standard detection dataset. Table 5 shows that HRDNet achieves state-of-the-art results, and >4.9%APsmall improvement compared with most recent models.

There are not too many small objects in Pascal VOC. We conducted experiments on this data set to demonstrate HRDNet not only improves small object detection but also keeps the performance for large objects.

Merely increasing the image resolution without modifications will relatively damage the performance of large objects. Moreover, the server variance of object scales further limits the performance from high-resolution images. Motivated by this, we propose a new detection network for small objects, HRDNet. In order to handle the issues well, we further design MD-IPN and MS-FPN. HRDNet achieves the state-of-the-art on small object detection data set, VisDrone2019, at the same time, we outperform on other benchmarks, i.e., MS COCO, Pascal VOC.