How to show a probabilistic model is better

We present a simple theoretical framework, and corresponding practical procedures, for comparing probabilistic models on real data in a traditional machine learning setting. This framework is based on the theory of proper scoring rules, but requires only basic algebra and probability theory to understand and verify. The theoretical concepts presented are well-studied, primarily in the statistics literature. The goal of this paper is to advocate their wider adoption for performance evaluation in empirical machine learning. 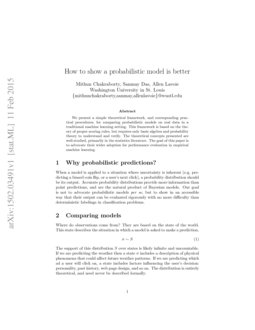 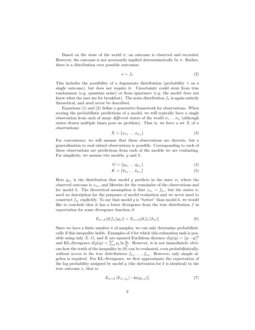 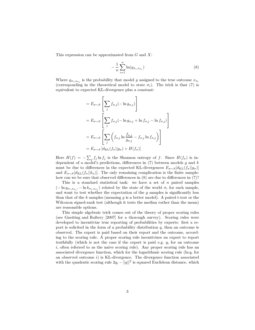 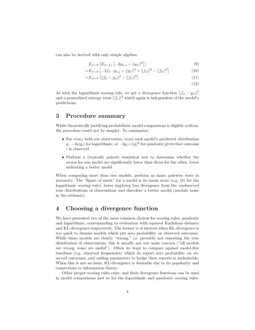 per se, but to show in an accessible way that their output can be evaluated rigorously with no more difficulty than deterministic labelings in classification problems.

Where do observations come from? They are based on the state of the world. This state describes the situation in which a model is asked to make a prediction.

The support of this distribution S over states is likely infinite and uncountable. If we are predicting the weather then a state σ includes a description of physical phenomena that could affect future weather patterns. If we are predicting which ad a user will click on, a state includes factors influencing the user’s decision: personality, past history, web page design, and so on. The distribution is entirely theoretical, and need never be described formally.

Based on the state of the world σ, an outcome is observed and recorded. However, the outcome is not necessarily implied deterministically by σ. Rather, there is a distribution over possible outcomes:

This includes the possibility of a degenerate distribution (probability 1 on a single outcome), but does not require it. Uncertainty could stem from true randomness (e.g. quantum noise) or from ignorance (e.g. the model does not know what the user ate for breakfast). The noise distribution fσ is again entirely theoretical, and need never be described.

Equations (1) and (2) define a generative framework for observations. When scoring the probabilistic predictions of a model, we will typically have a single observation from each of many different states of the world σ1…σn (although states drawn multiple times pose no problem). That is, we have a set X of n observations:

Here gσ1 is the distribution that model g predicts in the state σ1 where the observed outcome is xσ1, and likewise for the remainder of the observations and for model k. The theoretical assumption is that xσi∼fσi, but the states σi need no description for the purposes of model evaluation and we never need to construct fσi explicitly. To say that model g is “better” than model k, we would like to conclude that it has a lower divergence from the true distribution f in expectation for some divergence function d:

Since we have a finite number n of samples, we can only determine probabilistically if this inequality holds. Examples of d

for which this estimation task is possible using only

X, G, and K are squared Euclidean distance d(p||q)=||p−q||2 and KL-divergence d(p||q)=∑jpjlnpjqj. However, it is not immediately obvious how the truth of the inequality in (6) can be evaluated, even probabilistically, without access to the true distributions fσ1,…,fσn. However, only simple algebra is required. For KL-divergence, we first approximate the expectation of the log probability assigned by model g (the derivation for k is identical) to the true outcome x, that is:

This expression can be approximated from G and X:

Where gσi,xσi is the probability that model g assigned to the true outcome xσi (corresponding in the theoretical model to state σi). The trick is that (7) is equivalent to expected KL-divergence plus a constant:

This is a standard statistical task: we have a set of n paired samples (−lngσi,xσi,−lnkσi,xσi) related by the state of the world σi for each sample, and want to test whether the expectation of the g samples is significantly less than that of the k samples (meaning g

is a better model). A paired t-test or the Wilcoxon signed-rank test (although it tests the median rather than the mean) are reasonable options.

This simple algebraic trick comes out of the theory of proper scoring rules (see Gneiting and Raftery (2007) for a thorough survey). Scoring rules were developed to incentivize true reporting of probabilities by experts: first a report is solicited in the form of a probability distribution q, then an outcome is observed. The expert is paid based on their report and the outcome, according to the scoring rule. A proper scoring rule incentivizes an expert to report truthfully (which is not the case if the expert is paid e.g. qi for an outcome i, often referred to as the naive scoring rule). Any proper scoring rule has an associated divergence function, which for the logarithmic scoring rule (lnqi for an observed outcome i) is KL-divergence. The divergence function associated with the quadratic scoring rule 2qi−||q||2 is squared Euclidean distance, which can also be derived with only simple algebra:

As with the logarithmic scoring rule, we get a divergence function ||fσ−gσ||2 and a generalized entropy term ||fσ||2 which again is independent of the model’s predictions.

While theoretically justifying probabilistic model comparisons is slightly tedious, the procedure could not be simpler. To summarize:

When comparing more than two models, perform as many pairwise tests as necessary. The “figure of merit” for a model is its mean score (e.g. (8) for the logarithmic scoring rule), lower implying less divergence from the unobserved true distributions of observations and therefore a better model (modulo noise in the estimate).

We have presented two of the most common choices for scoring rules, quadratic and logarithmic, corresponding to evaluation with squared Euclidean distance and KL-divergence respectively. The former is of interest when KL-divergence is too quick to dismiss models which put zero probability on observed outcomes. While these models are clearly “wrong,” i.e. provably not reporting the true distribution of observations, this is usually not our main concern (“all models are wrong, some are useful”). Often we want to compare against model-free baselines (e.g. observed frequencies) which do report zero probability on observed outcomes, and adding parameters to hedge their reports is undesirable. When this is not an issue, KL-divergence is desirable due to its popularity and connections to information theory.

One popular method of scoring probabilistic models is perplexity, which is simply an exponentiated version of (8). This exponentiation rewards slight over-reporting of high probability events, but the effect diminishes rapidly with increasing dataset size. Nonetheless, it is theoretically preferable to use the un-exponentiated version for model comparisons.