How to Read Many-Objective Solution Sets in Parallel Coordinates 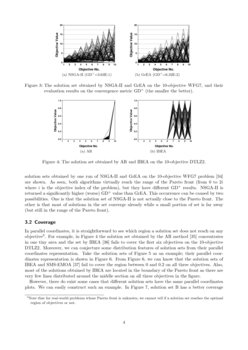 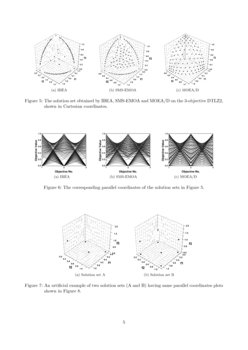 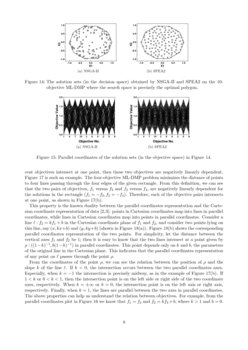 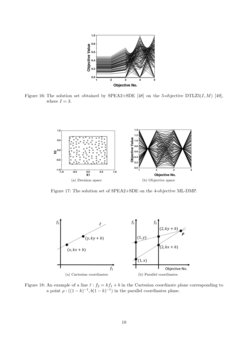 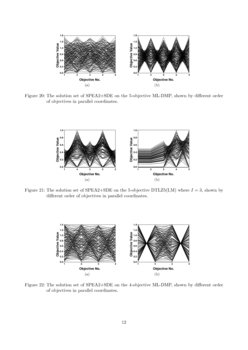 The classic scatter plot is a basic tool in viewing solution vectors in multiobjective optimization. It allows us to observe/perceive the quality of a set of solutions, the shape and distribution of a set of solutions, the relation between objectives (e.g., the extent of their conflict), etc. Unfortunately, the scatter plot may only be done readily in a 2D or 3D Cartesian coordinate space

111The scatter plot matrix [1] is scalable to any dimension, but it only reflects the relation between two objectives.. It could be difficult for people to comprehend the scatter plot in a higher-dimensional space.

Despite the popularity, the parallel coordinates plot is not as straightforward as the scatter plot in presenting the information contained in a solution set. Due to mapping multi-dimensional data onto a lower 2D space, the loss of information is inevitable. This could naturally lead to questions raised. Specifically, in the context of multiobjective optimization, one may ask

To show a set of points in an m-dimensional space, parallel coordinates map them onto a 2D graph, with m parallel axes being plotted, typically vertical and equally spaced. A point in an m-dimensional space is represented as a polyline with vertices on these parallel axes, and the position of the vertex on the i-th axis corresponds to the value of the point on the i-th dimension. Parallel coordinates are simple to construct and scale well with the dimensionality of data. Adding more dimensions only involves adding more axes. Figure 1 presents an example of the parallel coordinates plot, where three 4D points are mapped to three polylines, respectively.

In multiobjective optimization, Pareto dominance is a fundamental criterion to compare solutions in terms of convergence. Parallel coordinates can clearly reflect the Pareto dominance relation between two solutions (such as polyline a being dominated by polyline b in Figure 1, assuming a minimization problem scenario) if the solution polylines are not overcrowded. It is worth mentioning that one can remove dominated solutions in parallel coordinates if they are only interested in nondominated ones. This may make the plot clearer especially when comparing the quality of solution sets.

In addition to reflecting the Pareto dominance relation, the range that a solution set in parallel coordinates can largely imply its convergence. Figure 2 is such an example, where the parallel coordinates representation of two solution sets obtained by one run222The setting of the population size and maximum evaluations was 100 and 30,000, respectively. This setting was used in all conducted experiments in this paper, unless explicitly mentioned otherwise. In addition, the grid division in GrEA was set to 8. of two EMO algorithms, NSGA-II [29] and GrEA [30], on the 10-objective DTLZ2 problem [31] is shown. As can be seen, NSGA-II fails to converge, with its solution set ranging from 0 to around 3.5 in contrast to the problem’s Pareto front ranging from 0 to 1. GrEA has a good convergence on this problem and its solution set has the same range as the Pareto front. These observations can be confirmed by the results of the convergence metric GD+ [32] shown in the figure. GD+ is a modified version of the original GD [33], which makes it compatible with Pareto dominance.

However, we may not be able to accurately know the convergence of solution sets by their range shown in parallel coordinates. That is, even if two solution sets are located in the same range, they can perform considerably differently in terms of convergence. Figure 3 gives such an example, where solution sets obtained by one run of NSGA-II and GrEA on the 10-objective WFG7 problem [34] are shown. As seen, both algorithms virtually reach the range of the Pareto front (from 0 to 2i where i is the objective index of the problem), but they have different GD+ results. NSGA-II is returned a significantly higher (worse) GD+ value than GrEA. This occurrence can be caused by two possibilities. One is that the solution set of NSGA-II is not actually close to the Pareto front. The other is that most of solutions in the set converge already while a small portion of set is far away (but still in the range of the Pareto front).

One important fact that we would like to note is that as parallel coordinates map an m-dimensional graph onto a 2D graph they cannot fully reflect the coverage of solution sets. A set of solutions (represented by polylines) may have a good coverage over the range of the Pareto front in the 2D graph, but they may only cover part of the Pareto front in the original m-dimensional space. An interesting example is shown in Figure 9. In that figure, NSGA-II appears to have a better coverage than GrEA according to the parallel coordinates plots, but GrEA has a better coverage evaluation result, measured by the coverage metric Diversity Comparison Indicator (DCI) [38].

10 and 11, MOEA/D [39] has a perfectly-distributed solution set and its corresponding polylines in parallel coordinates are distributed uniformly and regularly. This is in contrast to the solution set of NSGA-II which are distributed rather irregularly in both Cartesian and parallel coordinates plots. Note that a set of irregularly-distributed polylines may not represent a badly-distributed solution set, as uniformly-distributed solutions can have distinct values on different objectives. To show this, we select two EMO algorithms, MOEA/D [39] and BCE-MOEA/D [40], both of which are able to obtain a uniformly-distributed solution set on DTLZ2 (see Figure 12). In MOEA/D, the population distribution is maintained by a set of systematically-generated, uniformly-distributed weight vectors (within a simplex), and thus ideally its solutions only take several equivalent values on all the objectives. In contrast, in BCE-MOEA/D the population distribution is maintained by a niching-based criterion, and thus its solutions can spread over the whole range for each objective. Figure 13 gives the solution sets obtained by MOEA/D and BCE-MOEA/D on the 10-objective DTLZ2444Here the number of DTLZ2’s decision variables is set to m−1 (m is the number of objectives) to ensure that all solutions produced by algorithms are Pareto optimal; thus the uniformity measure cannot be affected by the difference of solution sets’ convergence.. As seen, on the uniformity metric Spacing (SP)555In this paper, the SP metric has been slightly modified to make it compatible with Pareto dominance. That is, if two solution sets are comparable in terms of Pareto dominance, then the SP value of the dominating set is 0 and the SP value of the dominated set is 1.[41], BCE-MOEA/D even performs better than MOEA/D, but we cannot see this from their parallel coordinates representation in the figure. This phenomenon may happen frequently when comparing decomposition-based algorithms having a set of systematically-generated weight vectors (such as MOEA/D and NSGA-III [42]) with algorithms that do not use such decomposition techniques (such as SPEA2 [43] and Two_arch2 [44]). So care needs to be taken when making a conclusion about the distribution uniformity of solution sets from parallel coordinates.

Finally, it is worth mentioning that parallel coordinates plots can be easily cluttered with multiple lines overlaid. This may completely prevent solution sets’ distribution from being observed. Figures 14 and 15 show such an example, with two solution sets obtained by NSGA-II and SPEA2 on the 10-objective ML-DMP problem [45, 46]. The m-objective ML-DMP minimizes the distance of two-dimensional points to a set of m straight lines, each of which passes through one edge of a given regular polygon with m vertexes. One interesting characteristic of ML-DMP is that the points in the regular polygon and their objective images are similar in the sense of Euclidean geometry. In other words, the ratio of the distance between any two points in the polygon to the distance between their corresponding objective vectors is a constant. This allows a straightforward understanding of the distribution of the objective vector set via observing the solution set in the 2D decision space. As can be seen in Figure 14, SPEA2 has a far better distribution uniformity than NSGA-II, but we cannot see the difference between their parallel coordinates representation in Figure 15.

An interesting phenomenon in the parallel coordinates plot is that if all lines between two adjacent objectives intersect at one point, then these two objectives are negatively linearly dependent. Figure 17 is such an example. The four-objective ML-DMP problem minimizes the distance of points to four lines passing through the four edges of the given rectangle. From this definition, we can see that the two pairs of objectives, f1 versus f3 and f2 versus f4, are negatively linearly dependent for the solutions in the rectangle (f1=−f3,f2=−f4). Therefore, each of the objective pairs intersects at one point, as shown in Figure 17(b).

In a solution set with m objectives, its parallel coordinates representation can only show m−1 relationships at a time. This can be a very small portion compared to the total (m2) relationships existing in m objectives. Therefore, a good objective axis arrangement providing the user as much (clear) information as possible is of importance. As shown in Figures 21 and 22

, after swapping some objectives, we can see interesting patterns (linearly dependent) between some pairs of objectives. However, determining a good order of axes is nontrivial. Researchers in the data visualization area mainly focus on clutter reduction techniques

[50, 51]. In the multiobjective optimization domain, an attempt has been made to place the most harmonious objectives in a row [52].

6 How to Draw A Parallel Coordinate Plot

In this section, we give procedures of how to plot a solution set in parallel coordinates by several commonly-used graphing tools: MS Excel, MATLAB, Latex, and Origin. Tables 1–4 provide the steps/codes by MS Excel, MATLAB, Latex, and Origin, respectively. For the command-line format tools (i.e., MATLAB and Latex), we use the example in Figure 1. Figure 23 also presents the graphs drawn by the four tools to that example. Finally, we would like to note that in this paper all of the parallel coordinates graphs of data examples were drawn by Origin.

Our subsequent study is towards overcoming/alleviating the difficulties of interpreting parallel coordinates plots presented in this paper. Particularly, how to arrange the order of objectives will be the focus of our future work as it had presented its usefulness in the paper. In this regard, a straightforward thought is to place the most conflicting objectives or the most harmonious objectives together so that people could see some meaningful patterns (such as the examples in Figures 21 and 22). Another thought is to consider the coverage of lines between objectives in a parallel coordinates plot; people may acquire more information from less coverage of the lines, for example, after exchanging the order of objectives f1 and f2 in Figure 8.

This work was supported in part by the Engineering and Physical Sciences Research Council (EPSRC) of U.K. under Grants EP/K001523/1 and EP/J017515/1, and National Natural Science Foundation of China (NSFC) under Grants 61329302 and 61403326. X. Yao was also supported by a Royal Society Wolfson Research Merit Award.