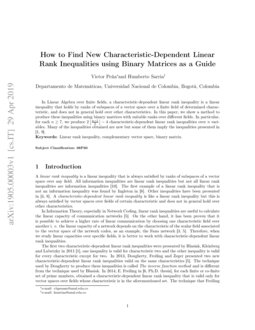 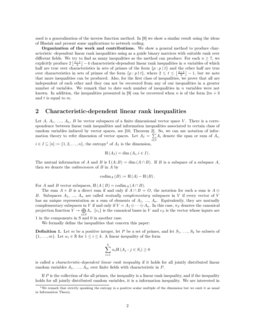 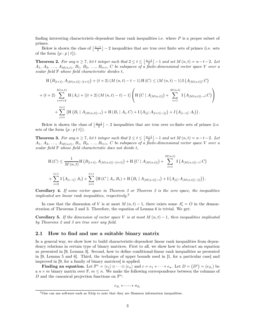 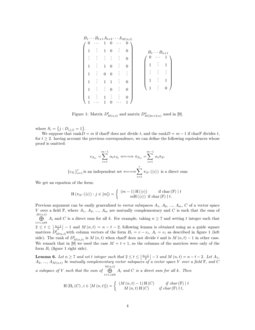 Characteristic-dependent linear rank inequalities have been presented by Blasiak, Kleinberg and Lubetzky [1], Dougherty, Freiling and Zeger [4], and E. Freiling [5]. The technique used by Dougherty et al. to produce these inequalities used as a guide the flow of some matroidal network to obtain restriction over linear solubility of these and it is different from the technique used by Blasiak et al. which is based on the dependency relations of the Fano and non-Fano Matroids. In [8], we show some inequalities using the ideas of Blasiak and present some applications to network coding that improve some existing results in [1, 5].

Organization of the work and contributions. We show a general method to produce characte-ristic-dependent linear rank inequalities using as a guide binary matrices with suitable rank over different fields. We try to find as many inequalities as the method can produce: For each n≥7, we explicitly produce 2⌊n−12⌋−4 characteristic-dependent linear rank inequalities in n variables of which half are true over characteristics in sets of primes of the form {p:p∣t} and the other half are true over characteristics in sets of primes of the form {p:p∤t}, where 2≤t≤⌊n−12⌋−1, but we note that more inequalities can be produced. Also, for the first class of inequalities, we prove that all are independent of each other and they can not be recovered from any of our inequalities in a greater number of variables. We remark that to date such number of inequalities of this type in n variables were not known. In addition, the inequalities presented in [8] can be recovered when n is of the form 2m+3 and t is equal to m.

Let A, A1, …, An, B be vector subspaces of a finite dimensional vector space V over a finite field F. Let ∑i∈IAi denote the span or sum of Ai. The sum A+B is a direct sum if and only if A∩B=O, the notation for such a sum is A⊕B. Subspaces A1, …, An are called mutually complementary subspaces in V if every vector of V has an unique representation as a sum of elements of A1, …, An. Equivalently, they are mutually complementary subspaces in V if and only if V=A1⊕⋯⊕An. In this case, πS denotes the canonical projection function V↠⨁i∈SAi. {ei} is the canonical bases in V and eS is the vector whose inputs are 1 in the components in S and 0 in another case.

[9, Theorem 2], we explain that: Let f be chosen uniformly at random from the set of linear functions from V to F, for A1, …, An define the random variables X1=f∣A1, …, Xn=f∣An, then

We formally define the inequalities that concern this paper:

if it holds for all jointly distributed linear random variables

A1, …, Am over finite fields with characteristic in P.

- is called an information inequality if the inequality holds for all jointly distributed random variables.

The following inequality is the first linear rank inequality which is not information inequality.

We are interested in finding interesting characteristic-dependent linear rank inequalities i.e. where P is a proper subset of primes.

2.1 Producing inequalities: How to find and use a suitable binary matrix

The following theorem is the principal theorem of this paper and shows a method to produce pairs of characteristic-dependent linear rank inequalities from suitable binary matrices. The demonstration is presented in subsection 2.2. We use this notation: [en,em]={ei:n≤i≤m}, [en,em)={ei:n≤i<m} and [en]:=[e1,en]={ei}; for a binary matrix B, we denote B=(Bi)=(eSi), with Si={j:B(j,i)=1}.

Let B=(Bi)=(eSi) be a n×m binary matrix over F, m≤n and t≥2 integer. We suppose that rankB=m if charF does not divide t, and rankB=m−1 in other cases. Let Aei, ei∈[en], BeSi, eSi∈B′ and C be vector subspaces of a finite dimensional vector space V over F. Then

where k1≤k2≤⋯≤kl give a partition in intervals, with maximum length, of T.

If the dimension of vector space V is at most n−1, then inequalities implicated in Theorem 3 are true over any field.

If some vector space in Theorem 3 is the zero space, the inequalities implicated are linear rank inequalities.111One can use software such as Xitip to note that they most be Shannon information inequalities.

Corollary 5 shows that each inequality, presented in example 6, can not be deduced from a higher order inequality by nullifying some variables. In fact, using Corollary 4, we can say more about the class (a) of these inequalities.

For m∈N and p prime, the function that counts all the powers of p less than or equal to m is denoted by φ(m,p). In example 6, φ(⌊n−12⌋−2,p) inequalities in n variables, which are true over fields whose characteristic is p, are produced. By Corollary 4, each of these inequalities holds over any characteristic when the dimension of V is at most n−t−3. Also, each inequality is determined by t and this number can run the powers of p less than or equal to ⌊n−12⌋−2. This means that each inequality is true in at least one vector space where the other inequalities are not true. Therefore, any of these inequalities can not be deduced from the other inequalities, much less if they are combined with linear rank inequalities, without violating this property. We have the next corollary.

In a general way, we show how to build characteristic-dependent linear rank inequalities from dependency relations in certain type of binary matrices. We show this in three steps:

A. Finding an equation.

A. Finding an equation: Let Fn=⟨e1⟩⊕⋯⊕⟨en⟩ and c=e1+⋯+en. Let B=(Bi)=(eSi) be a n×m binary matrix over F, m≤n. We make the following correspondence between the columns of B and the canonical projection functions on Fn:

We suppose that rankB=m if charF does not divide t, and the rankB=m−1 if charF divides t, for t≥2. Having account the previous correspondence, we can define the following propositions whose proof is omitted:

We get an equation of the form:

Previous argument can be easily generalized to vector subspaces Ae1, ..., Aen, C of a vector space V over a field F, where Ae1, Aen, ..., Aen are mutually complementary in V and C is such that the sum of ⨁i≠kAei and C is a direct sum for all k, such a collection of spaces is called tuple that satisfies condition of complementary vector spaces. Formally, we have:

When B exists, a tuple that satisfies condition of complementary vector spaces holds

B. Conditional characteristic-dependent linear rank inequalities: In the previous step we noticed that dependence relations of B can be expressed using projections of a suitable space C. In fact, we can derive more properties as follows, from eSi=∑j∈Siej=c−∑j∉Siej, we derive

This equality is easily proven. The following claim use this to find inequalities that depend on the characteristic of F, and the involved spaces have some dependency relationships expressed by B. We denote by B′={eSi:1<|Si|<n}; B′′={eSi:|Si|=1}; B′′′={C} if there exists eSi in B such that |Si|=n, and B′′′ is empty in other case.

a. If condition (i), (ii) and (iii) hold over a fields whose characteristic divides t, then

b. If condition (ii) and (iv) hold over a fields whose characteristic does not divide t, then

From Ae1, …, Aen, and C, we obtain a tuple that satisfies condition of complementary spaces (A′e1,…,A′en,¯C) as obtained in [8] which holds:

Additionally, for T⊆[en], we can take some elements ek1,…,ekl with k1≤k2≤⋯≤kl such that it is possible to built a partition in intervals [eki,ekj], with maximum length, of T. So,

Before continuing, we need the following three statements:

satisfies condition of complementary spaces, condition (i), H(¯Aek)=H(¯C)≤1 and

In effect, we show case k=l=min{i:ei∈B′′}, the general case is by induction. We note that ¯Ael=O if and only if ¯C=O, so this case is trivial. Otherwise, there exists ael≠O in ¯Ael and c≠O in ¯C such that ael=c+∑i≠laei, then c∈⨁ei∉B′′A′ei+¯Ael+⨁ei∈B′′,i>lA′ei. The affirmation is obtained noting that c generates ¯C [8, Remark 4]. Taking k=max{i:ei∈B′′}, we obtain that ¯C≤⨁¯Aei, so condition of complementary spaces is satisfied. Also, we have the equation:

which also implies the desired upper bound on codimAek(¯Aek). Now, condition (i) is straightforward because ¯C and each ¯Aek, ek∈B′′, have the same dimension. ∎