How Cox models react to a study-specific confounder in a patient-level pooled dataset: Random-effects better cope with an imbalanced covariate across trials unless baseline haz 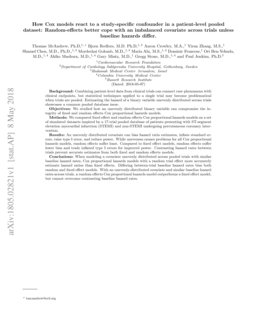 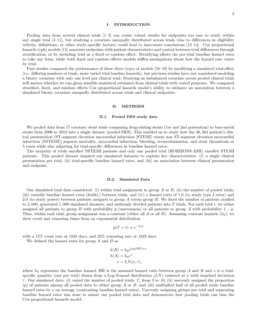 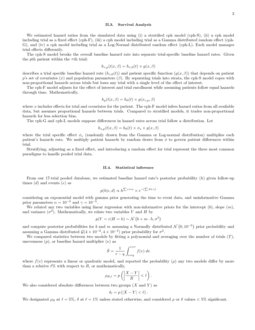 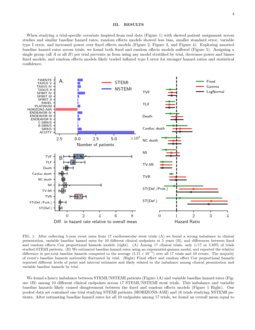 Historical data about disease outcomes can be integrated into the analys...
David Walsh, et al. ∙

Random errors are not politically neutral

Errors are inevitable in the implementation of any complex process. Here...
Michelle Blom, et al. ∙

Pooling data from several clinical trials lo2015sharing ; mello2013preparing ; ross2013ushering can create robust results for endpoints too rare to study within any single trial prospective2002age ; hart2007meta ; cannon2006meta ; sjauw2009systematic ; mamas2012influence ; spaulding2007pooled ; caixeta20095 ; steg2013effect , but studying a covariate unequally distributed across trials (due to differences in eligibility criteria, definitions, or other study-specific factors) could lead to inaccurate conclusions chalmers1991problems ; flather1997strengths ; berman2002meta . Cox proportional hazards (cph) models cox1984analysis associate endpoints with patient characteristics and control between-trial differences through stratification, or by including trial as a fixed or random effect. Stratifying allows the per-trial baseline hazard rates to take any form, while both fixed and random effects models stiffen assumptions about how the hazard rate varies by trial.

Past studies compared the performance of these three types of models andersen1999testing ; localio2001adjustments ; glidden2004modelling by modifying a simulated trial-effect (i.e. differing numbers of trials, more varied trial baseline hazards), but previous studies have not considered modeling a binary covariate with only one level per clinical trial. Studying an imbalanced covariate across pooled clinical trials will answer whether we can glean sensible statistical estimates from clinical trials with varied purposes. We compared stratified, fixed, and random effects Cox proportional hazards model’s ability to estimate an association between a simulated binary covariate unequally distributed across trials and clinical endpoints.

Our simulated trial data considered: (i) within trial assignment to group A or B, (ii) the number of pooled trials, (iii) variable baseline hazard rates (frailty) between trials, and (iv) a hazard ratio of 1.0 (to study type I error) and 2.0 (to study power) between patients assigned to group A versus group B. We fixed the number of patients studied to 2,000, generated 1,000 simulated datasets, and uniformly divided patients into T trials. For each trial t, we either assigned all patients to group B

p (unevenness) or all patients to group A with probability 1−p. Thus, within each trial, group assignment was a constant (either all A or all B). Assuming constant hazards (h0)

, we drew event and censoring times from an exponential distribution

We defined the hazard rates for group A and B as

where h0 represents the baseline hazard, HR is the assumed hazard ratio between group A and B and s

describes a trial specific baseline hazard rate (hτ,0(t)) and patient specific function (g(x,β)) that depends on patient p’s set of covariates (x) and population parameters (β). By separating trials into strata, the cph-S model copes with non-proportional hazards across trials but loses any trial with a single level of the effect of interest.

The cph-F model adjusts for the effect of interest and trial enrollment while assuming patients follow equal hazards through time. Mathematically,

where x includes effects for trial and covariates for the patient. The cph-F model infers hazard ratios from all available data, but assumes proportional hazards between trials. Compared to stratified models, it trades non-proportional hazards for less selection bias.

The cph-G and cph-L models suppose differences in hazard rates across trial follow a distribution. Let

where the trial specific effect ϕs (randomly drawn from the Gamma or Log-normal distribution) multiplies each patient’s hazards rate. We multiply patient hazards by random draws from ϕ to govern patient differences within trial.

Stratifying, adjusting as a fixed effect, and introducing a random effect for trial represent the three most common paradigms to handle pooled trial data.

considering an exponential model with gamma prior generating the time to event data, and uninformative Gamma prior parameters α=10−5 and γ=10−5.

(σ2). Mathematically, we relate two variables V and H by

We compared statistics between two models by fitting a polynomial and averaging over the number of trials (T), unevenness (p), or baseline hazard multiplier (ν) as

where f(v) represents a linear or quadratic model, and reported the probability (ρ) any two models differ by more than a relative ℓ% with respect to R, or mathematically,

We designated ρR at ℓ=5%, δ at ℓ=1% unless stated otherwise, and considered ρ or δ values <5% significant.

2, Figure 3, and Figure 4). Exploring assorted baseline hazard rates across trials, we found both fixed and random effects models suffered (Figure 5). Assigning a single group (all A or all B) per trial prevents us from using any model stratified by trial, decreases power and biases fixed models, and random effects models likely traded inflated type I error for stronger hazard ratios and statistical confidence.

We found a heavy imbalance between STEMI/NSTEMI patients (Figure 1A) and variable baseline hazard rates (Figure 1B) among 10 different clinical endpoints across 17 STEMI/NSTEMI stent trials. This imbalance and variable baseline hazards likely caused disagreement between the fixed and random effects models (Figure 1 Right). Our pooled data set contained one trial studying STEMI patients (HORIZONS-AMI) and 16 trials studying NSTEMI patients. After estimating baseline hazard rates for all 10 endpoints among 17 trials, we found an overall mean equal to 5.15×10−5 and relative trial differences from −1.00 to 7.95 times the mean. Studying an imbalanced STEMI/NSTEMI covariate with variable baseline hazards led to large disagreement between fixed and random effect models for: death, cardiac death, non-cardiac death, myocardial infarction, target vessel revascularization, and stent thrombosis. Our simulated data aimed to tease apart why we found these disagreements between models.

Our simulated experiment showed both fixed and random effects models fail when studying a covariate unevenly distribute across trials that have varying baseline hazard rates. We applied fixed and random effect models to a real 17-trial dataset of STEMI and NSTEMI patients and found worse performance for fixed effect models than random effects models when trials had similar baseline hazard rates. Unlike previous studies that scrutinize cluster variability, this work tests model robustness under a fixed-effect’s imbalance across clusters.

Compared to fixed models, random effects models take better advantage of trial information to reduce hazard ratio estimates’ standard errors. Stratified models estimate treatment effect within each trial, and with only one treatment per trial, have no use. Fixed effect models do take advantage of treatment effect across all trials, but estimating effects for each trial creates a more uncertain treatment-effects hazard ratio. Random effects models isolate treatment assignment (as a fixed effect) from trial effects (as a random effect) and apply additional trial data toward better estimating treatment assignment.

We limited ourselves to studying a binary covariate unevenly distributed across trials, simulating data with constant hazards, and modeling time to event with cph models. A continuous covariate could behave differently than a binary variable under the same conditions. Constant hazards do not occur in typical trials, but cph models ignore baseline hazard rates. Many other models exist to model time to event, such as accelerated failure time models, and may prove more useful than cph. This study’s limitations may inspire more realistic simulated datasets and their effect on the cph model.

We plan to study whether Cox proportional hazards models perform better with a smaller set of trials with covariate balance compared to a larger set of unbalanced trials. We also plan to study continuous variables split across pooled trials and alternative models of time-to-event data within the context of unevenly distributed variables across a pooled database.

In most cases, random effects models stand up to an unevenly distributed binary covariate so long as each trial has similar baseline hazard rates.

The authors declare no potential conflict of interests.