We prove that every planar graph is the intersection graph of homothetic triangles in the plane. 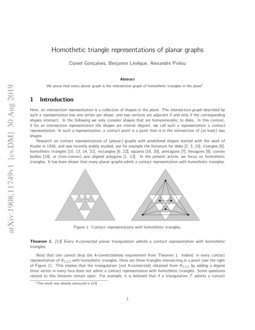 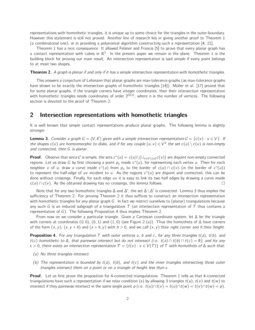 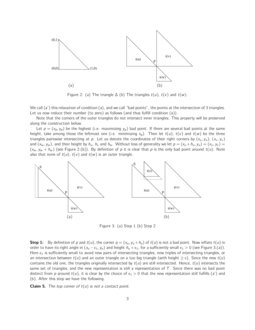 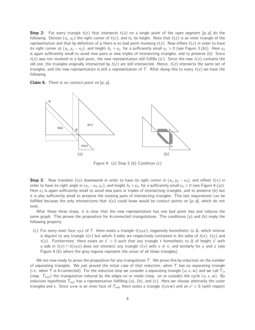 The L-intersection graphs are the graphs that have a representation as i...
Daniel Gonçalves, et al. ∙

The interval number of a planar graph is at most three

The interval number of a graph G is the minimum k such that one can assi...
Guillaume Guégan, et al. ∙

Intersection of triangles in space based on cutting off segment

Theorem 1 has a nice consequence. It allowed Felsner and Francis [5] to prove that every planar graph has a contact representation with cubes in R3. In the present paper we remain in the plane. Theorem 1 is the building block for proving our main result. An intersection representation is said simple if every point belongs to at most two shapes.

A graph is planar if and only if it has a simple intersection representation with homothetic triangles.

This answers a conjecture of Lehmann that planar graphs are max-tolerance graphs (as max-tolerance graphs have shown to be exactly the intersection graphs of homothetic triangles [14]). Müller et al. [17] proved that for some planar graphs, if the triangle corners have integer coordinates, then their intersection representation with homothetic triangles needs coordinates of order 2Ω(n), where n is the number of vertices. The following section is devoted to the proof of Theorem 2.

Consider a graph G=(V,E) given with a simple intersection representation C={c(v):v∈V}. If the shapes c(v) are homeomorphic to disks, and if for any couple (u,v)∈V2 the set c(u)∖c(v) is non-empty and connected, then G is planar.

Proof. Observe that since C is simple, the sets c∘(u)=c(u)∖(∪v∈V∖{u}c(v)) are disjoint non-empty connected regions. Let us draw G by first choosing a point pu inside c∘(u), for representing each vertex u. Then for each neighbor v of u, draw a curve inside c∘(u) from pu to the border of c(u)∩c(v) (in the border of c∘(u)) to represent the half-edge of uv incident to u. As the regions c∘(u) are disjoint and connected, this can be done without crossings. Finally, for each edge uv it is easy to link its two half edges by drawing a curve inside c(u)∩c(v). As the obtained drawing has no crossings, the lemma follows. □

Note that for any two homothetic triangles Δ and Δ′, the set Δ∖Δ′ is connected. Lemma 3 thus implies the sufficiency of Theorem 2. For proving Theorem 2 it thus suffices to construct an intersection representation with homothetic triangles for any planar graph G. In fact we restrict ourselves to (planar) triangulations because any such G is an induced subgraph of a triangulation T (an intersection representation of T thus contains a representation of G). The following Proposition 4 thus implies Theorem 2.

For any triangulation T with outer vertices a, b and c, for any three triangles t(a), t(b), and t(c) homothetic to Δ, that pairewise intersect but do not intersect (i.e. t(a)∩t(b)∩t(c)=∅), and for any ϵ>0, there exists an intersection representation T={t(v):v∈V(T)} of T with homothets of Δ such that:

Proof. Let us first prove the proposition for 4-connected triangulations. Theorem 1 tells us that 4-connected triangulations have such a representation if we relax condition (a) by allowing 3 triangles t(u), t(v) and t(w) to intersect if they pairewise intersect in the same single point p (i.e. t(u)∩t(v)=t(u)∩t(w)=t(v)∩t(w)=p). We call (a’) this relaxation of condition (a), and we call “bad points”, the points at the intersection of 3 triangles. Let us now reduce their number (to zero) as follows (and thus fulfill condition (a)).

Note that the corners of the outer triangles do not intersect inner triangles. This property will be preserved along the construction below.

Let p=(xp,yp) be the highest (i.e. maximizing yp) bad point. If there are several bad points at the same height, take among those the leftmost one (i.e. minimizing xp). Then let t(u), t(v) and t(w) be the three triangles pairewise intersecting at p. Let us denote the coordinates of their right corners by (xu,yu), (xv,yv) and (xw,yw), and their height by hu, hv and hw. Without loss of generality we let p=(xu+hu,yu)=(xv,yv)=(xw,yw+hw) (see Figure 2.(b)). By definition of p it is clear that p is the only bad point around t(u). Note also that none of t(u), t(v) and t(w) is an outer triangle.

By definition of p and t(u), the corner q=(xu,yu+hu) of t(u) is not a bad point. Now inflate t(u) in order to have its right angle in (xu−ϵ1,yu) and height hu+ϵ1, for a sufficiently small ϵ1>0 (see Figure 3.(a)). Here ϵ1 is sufficiently small to avoid new pairs of intersecting triangles, new triples of intersecting triangles, or an intersection between t(u) and an outer triangle on a too big triangle (with height ≥ϵ). Since the new t(u) contains the old one, the triangles originally intersected by t(u) are still intersected. Hence, t(u) intersects the same set of triangles, and the new representation is still a representation of T. Since there was no bad point distinct from p around t(u), it is clear by the choice of ϵ1>0 that the new representation still fulfills (a’) and (b). After this step we have the following.

The top corner of t(u) is not a contact point.

For every triangle t(z) that intersects t(u) on a single point of the open segment ]p,q[ do the following. Denote (xz,yz) the right corner of t(z), and hz its height. Note that t(z) is an inner triangle of the representation and that by definition of p there is no bad point involving t(z). Now inflate t(z) in order to have its right corner at (xz,yz−ϵ2), and height hz+ϵ2, for a sufficiently small ϵ2>0 (see Figure 3.(b)). Here ϵ2 is again sufficiently small to avoid new pairs or new triples of intersecting triangles, and to preserve (b). Since t(z) was not involved in a bad point, the new representation still fulfills (a’). Since the new t(z) contains the old one, the triangles originally intersected by t(z) are still intersected. Hence, t(z) intersects the same set of triangles, and the new representation is still a representation of T. After doing this to every t(z) we have the following.

After these three steps, it is clear that the new representation has one bad point less and induces the same graph. This proves the proposition for 4-connected triangulations. The conditions (a) and (b) imply the following property.

We are now ready to prove the proposition for any triangulation T. We prove this by induction on the number of separating triangles. We just proved the initial case of that induction, when T has no separating triangle (i.e. when T is 4-connected). For the inductive step we consider a separating triangle (u,v,w) and we call Tin (resp. Tout) the triangulation induced by the edges on or inside (resp. on or outside) the cycle (u,v,w). By induction hypothesis Tout has a representation fulfilling (a), (b), and (c). Here we choose arbitrarily the outer triangles and ϵ. Since uvw is an inner face of Tout there exists a triangle t(uvw) and an ϵ′>0 (with respect to the inner face uvw) as described in (c). Then it suffices to apply the induction hypothesis for Tin (which outer vertices are u, v and w), with the already existing triangles t(u), t(v), and t(w) , and for ϵ′′=min(ϵ,ϵ′). Then one can easily check that the obtained representation fulfills (a), (b), and (c). This completes the proof of the proposition. □