Code-switching refers to the usage of two languages within a sentence or discourse. It is a global phenomenon among multilingual communities and has emerged as an independent area of research. With the increasing demand for the code-switching automatic speech recognition (ASR) systems, the development of a code-switching speech corpus has become highly desirable. However, for training such systems, very limited code-switched resources are available as yet. In this work, we present our first efforts in building a code-switching ASR system in the Indian context. For that purpose, we have created a Hindi-English code-switching speech database. The database not only contains the speech utterances with code-switching properties but also covers the session and the speaker variations like pronunciation, accent, age, gender, etc. This database can be applied in several speech signal processing applications, such as code-switching ASR, language identification, language modeling, speech synthesis etc. This paper mainly presents an analysis of the statistics of the collected code-switching speech corpus. Later, the performance results for the ASR task have been reported for the created database.

(CS) is a linguistic phenomenon defined as “the

alternation of two languages within a single dis- 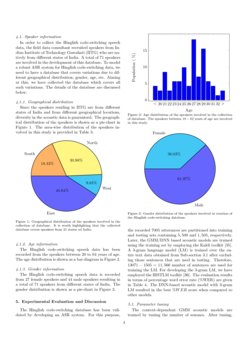 In multilingual communities, the speakers often switch or mix between two or more languages or language varieties during communication in their day to day lives. In linguistics, this phenomenon is referred to as code-switching Gumperz_1982_Discourse ; nilep2006code . This phenomenon poses some interesting research challenges to speech recognition Lyu_2006_Speech ; Bhuvanagirir_2012_Mixed ; ahmed2012automatic , language identification Lyu_2008_Language and language modelling Cao_2010_Semantics ; Yeh_2010_Integrated ; hamed2017building domains. Over the years, due to urbanization and geographical distribution, people have moved from one place to another for a better livelihood. Hence, communicating in two or more languages helps to interact better with people from different places and cultures. There are many reasons for the occurrence of code-switching. The people belonging to the bilingual communities say that the main reason for code-switching between languages is due to the lack of words in the vocabulary of that particular native language Grosjean_1982_Life . According to  myers1993social ; malik1994socio ; milroy1995one ; dey2014hindi , some possible reasons for code-switching are: (i) to qualify the message by emphasizing specific words, (ii) to convey a personalized message, (iii) to maintain confidentiality during verbal communication, (iv) to show expertise, authority, status, etc. Another reason for code-switching is to enrich communication between speakers without any change in the situation. Hence, a native language speaker actively embeds meanings into the conversation by mixing non-native language words su2001code

. Based on the locations of the non-native words, code-switching can be broadly classified into two modes. When the switching happens within the sentence it is referred to as the

Over the years, the English language has become the most widely spoken language in the world. After gaining independence from the British rule, though the Indian constitution declared Hindi as the primary official language, the usage of English was continued as a secondary language for its dominance in administration, education, and law malhotra1980hindi . Thereby, the urban population has started a trend to communicate in English for economic and social purposes. Over the years, substantial code-switching to English while speaking Hindi, as well as many other Indian languages, has become a common feature kumar1986certain ; Smita2009 . Note that, 41.1% of the Indian population are native Hindi speakers and hence the switching between Hindi and English is very common. Also, in the recent past, the researchers have reported that the native language of the speaker influences the foreign (non-native) language acquisition flege1995second . In India, English is taught in schools from elementary level across the country, but very few schools are able to impart correct English pronunciations devoid of native language influences to their pupils. The recent works bali2014 ; Das_2015_Code have highlighted that the code-switching phenomenon is also observed in chats, comments, and messages posted on the social media sites like Facebook, Twitter, WhatsApp, YouTube, etc. Table 1 shows a few example sentences of different modes of code-switching while highlighting the differences in the contextual information carried by the non-native words. In Type-1 intra-sentential code-switching, the non-native language words either occur in sequence or form a phrase, thus carry some contextual information. Whereas, in Type-2 case, the non-native language words are embedded into the native language sentences in such a manner that virtually no contextual information could be derived from those words. Also, during code-switching, we observe that the majority of the sentences belong to Type-2 intra-sentential mode. However, due to lack of availability of the domain-specific resources, the research activity is somewhat limited.

The monolingual automatic speech recognition (ASR) systems may be capable of recognizing a few words from a foreign language but are unable to handle a significant amount of code-switching in the data. On account of the existence of different variants of English pronunciations and code-switching effects, the development of an ASR system for Hindi-English (Hinglish) code-switching speech data is a challenging task. To the best of our knowledge, there is no large-sized Hinglish corpus available for carrying out the research. Towards addressing that constraint, we recently created a Hinglish corpus covering all typical sources of variations such as accent, session, channel, age, gender, etc. In this work, we describe the details of that corpus and also present basic experimental evaluation is done on the same.

The remainder of this paper is organized as follows: In Section 2, we review the code-switching corpora currently reported in the literature. In Section 3, the details about Hinglish speech and text corpus along with that of the necessary lexical resources for developing the Hinglish ASR system, are presented in detail. The experimental evaluations using the created Hinglish corpus has been presented in Section 5. The paper is concluded in Section 6.

In literature, a few code-switching speech corpora are already reported and they happen to cover different native and non-native language combinations. In the following, we briefly review those code-switching corpora while summarizing their salient attributes.

From the literature review, it can be noted that very small sized code-switching acoustic and linguistic resources have been available so far covering the Indian context. This motivated us to create moderate sized Hinglish resources so that current technological advances in acoustic and language modeling can be explored for Hinglish ASR task.

For the experimental purpose, the Hinglish code-switching text data has been collected by crawling a few blogging websites 111https://shoutmehindi.com,222https://notesinhinglish.blogspot.in,333https://www.techyukti.com,444http://www.learncpp.com

having different contexts. The crawled data is normalized into meaningful sentences and further processed to remove extra spaces, special characters, emoticons, etc. Data thus obtained is used for training the language models, creating the lexicon and also as the text transcription for recording the acoustic data. The salient details of the Hinglish code-switching text corpus created is summarized in Table

Hinglish code-switching acoustic data is recorded over the phone from speakers belonging to different states in India. A consultant was hired for enrolling the speakers to call a toll free number from their mobile phones. The speakers called from various acoustic environments such as home, office, etc. Each speaker was given 100 unique sentences taken from the above-processed text data. These 100 sentences are partitioned into 5 groups which contain 20 sentences each. Each speaker is requested to record those 5 groups in 5 different sessions in order to capture the session variations such as emotions, environment, etc. It is worth highlighting that the duration of the sentences given to each speaker varies from 2−30 seconds. Each speaker took about 10 minutes to complete recording the 20 sentences in each session. On an average, to complete recording the 100 sentences, each speaker took about 50 minutes. The volunteering speakers were compensated with 250 for their time and effort.

The speech data is recorded at 8 kHz sampling frequency and a bit rate of 128. This set of speech files was manually inspected and pruned. At the end of the data collection phase, the Hinglish code-switching database contained 7,005 utterances in total spoken by 71 speakers.

3.3 Development of the lexical resources

For the creation of a lexicon for development of an ASR system for Hinglish data, a unified phone list has been created for Hindi and English words. Also, a unique word list is extracted from the 13,071 sentences obtained from Sub-section 3.1. The phone level transcription for those words has been done manually. Thus created lexicon covers all the pronunciation variations.

4 Statistical Analysis of the Database

This section provides the statistical analysis of the Hinglish code-switching speech corpus. The following subsection provides information about the speakers in the database. Later, a description of the size and linguistic features of the database is provided.

In order to collect the Hinglish code-switching speech data, the field data consultant recruited speakers from Indian Institute of Technology Guwahati (IITG) who are natively from different states of India. A total of 71 speakers are involved in the development of this database. To model a robust ASR system for Hinglish code-switching data, we need to have a database that covers variations due to different geographical distribution, gender, age, etc. Aiming at this, we have collected the database which covers all such variations. The details of the database are discussed below.

The Hinglish code-switching speech data has been recorded from the speakers between 20 to 64 years of age. The age distribution is shown as a bar-diagram in Figure 2.

The Hinglish code-switching speech data is recorded from 27 female speakers and 44 male speakers resulting in a total of 71 speakers from different states of India. The gender distribution is shown as a pie-chart in Figure 3.

The Hinglish code-switching database has been validated by developing an ASR system. For this purpose, the recorded 7005 utterances are partitioned into training and testing sets containing 5,500 and 1,505, respectively. Later, the GMM/DNN based acoustic models are trained using the training set by employing the Kaldi toolkit povey2011kaldi . A 3-gram language model (LM) is trained over the entire text data obtained from Sub-section 3.1 after excluding those sentences that are used in testing. Therefore, 13071−1505=11,566 number of sentences are used for training the LM. For developing the 3-gram LM, we have employed the IRSTLM toolkit federico2008irstlm . The evaluation results in terms of percentage word error rate (%WER) are given in Table 4. The DNN-based acoustic model with 3-gram LM resulted in the best %WER score when compared to other models.

In this work, the procedure followed to develop a Hinglish code-switching speech database has been presented. It contains 7,005 utterances spoken by 71 speakers from different parts of India. The database has been validated by developing an ASR system. The collection of the database is still in progress.

The authors wish to acknowledge with gratitude for the financial assistance received towards data collection from an ongoing project grant no. 11(18)/2012-HCC(TDIL) from the Ministry of Electronics and Information Technology, Govt. of India.