Epidemiology simulations have become a fundamental tool in the fight against the epidemics of various infectious diseases like AIDS and malaria. However, the complicated and stochastic nature of these simulators can mean their output is difficult to interpret, which reduces their usefulness to policymakers. In this paper, we introduce an approach that allows one to treat a large class of population-based epidemiology simulators as probabilistic generative models. This is achieved by hijacking the internal random number generator calls, through the use of a universal probabilistic programming system (PPS). In contrast to other methods, our approach can be easily retrofitted to simulators written in popular industrial programming frameworks. We demonstrate that our method can be used for interpretable introspection and inference, thus shedding light on black-box simulators. This reinstates much-needed trust between policymakers and evidence-based methods. 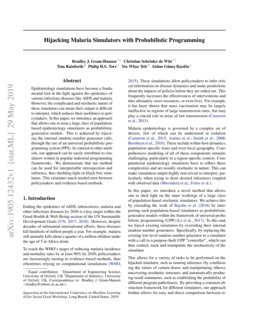 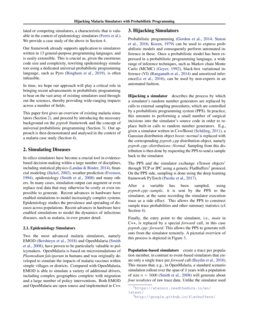 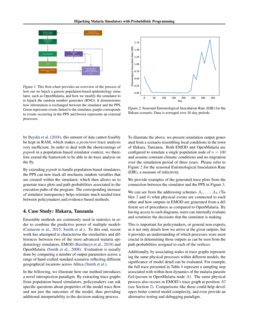 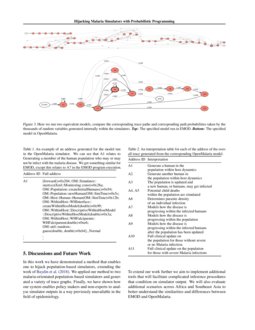 We consider the problem of Bayesian inference in the family of probabili...
Mario Lezcano Casado, et al. ∙

An increasing number of machine learning models have been deployed in do...
Shivani Choudhary, et al. ∙

Ending the epidemics of AIDS, tuberculosis, malaria and other infectious diseases by 2030 is a key target within the Good Health & Well-Being section of the UN Sustainable Development Goals (UN, 2017, 2018). However, despite decades of substantial international efforts, these diseases kill hundreds of million people a year. For example, malaria still annually kills about a quarter of a million children under the age of 5 in Africa alone.

To reach the WHO’s target of reducing malaria incidence and mortality rates by at least 90% by 2030, policymakers are increasingly turning to evidence-based methods, thus oftentimes relying on computational simulations (WHO, 2015). These simulations allow policymakers to infer critical information on disease dynamics and make predictions about the impacts of policies before they are rolled out. This frequently increases the effectiveness of interventions and thus ultimately saves resources, or even lives. For example, it has been shown that mass vaccination may be largely ineffective in regions of large transmission rates, but may play a crucial role in areas of low transmission (Cameron et al., 2015).

Malaria epidemiology is governed by a complex set of drivers, few of which can be understood in isolation (Cameron et al., 2015; Autino et al., ; Smith et al., 2008; Bershteyn et al., 2018). These include within-host dynamics, population-specific traits and even local geography. Comprehensive modeling of all of these components remains challenging, particularly in a region-specific context. Computational epidemiology simulators have to reflect these complexities and are usually stochastic in nature. This can make simulation output highly non-trivial to interpret, particularly when trying to draw desired inferences coupled with observed data (Mwendera et al., ; Ferris et al., ).

In this paper, we introduce a novel method that allows one to shed light on the inner workings of a large class of population-based stochastic simulators. We achieve this by extending the work of Baydin et al. (2018) by interpreting such population-based simulators as probabilistic generative models within the framework of universal probabilistic programming (UPP) (Le et al., 2017). To this end, we hijack existing simulators by overriding their internal random number generators. Specifically, by replacing the existing low-level random number generator in a simulator with a call to a purpose-built UPP “controller”, which can thus control, track and manipulate the stochasticity of the simulator.

This allows for a variety of tasks to be performed on the hijacked simulator, such as running inference (by conditioning the values of certain draws and manipulating others), uncovering stochastic structure, and automatically producing result summaries, such as establishing the probability of different program paths/traces. By providing a common abstraction framework for different simulators, our approach further allows for easy and direct comparison between related or competing simulators, a characteristic that is valuable in the context of epidemiology simulators

Our framework already supports application to simulators written in 13 general-purpose programming languages, and is easily extensible. This is crucial as, given the enormous code size and complexity, rewriting epidemiology simulators using a dedicated universal probabilistic programming language, such as Pyro (Bingham et al., 2019), is often infeasible.

In time, we hope our approach will play a critical role in bringing recent advancements in probabilistic programming to bear on the vast array of existing simulators used throughout the sciences, thereby providing wide-ranging impacts across a number of fields.

This paper first gives an overview of existing malaria simulators (Section 2), and proceed by introducing the necessary background on the pyprob framework and the concept of universal probabilistic programming (Section 3). Our approach is then demonstrated and analysed in the context of a malaria case study (Section 4).

Two the most advanced malaria simulators, namely EMOD (Bershteyn et al., 2018) and OpenMalaria (Smith et al., 2008), have proven to be particularly valuable to policymakers. OpenMalaria is based on microsimulations of Plasmodium falciparum in humans and was originally developed to simulate the impacts of malaria vaccines within simple villages or districts. Compared with OpenMalaria, EMOD is able to simulate a variety of additional drivers, including complex geographies complete with migration and a large number of policy interventions. Both EMOD and OpenMalaria are open source and implemented in C++.

describes the process by which a simulator’s random number generators are replaced by calls to external sampling procedures, which are controlled by a probabilistic programming system (PPS). In practice, this amounts to performing a small number of surgical incisions into the simulator’s source code in order to replace built-in calls to random number generators. E.g., given a simulator written in C++/Boost (Schäling, 2011)

boost::normal is replaced with the corresponding pyprob_cpp distribution object, namely pyprob_cpp::distributions::Normal. Sampling from this distribution is then done by requesting the PPS to send a sample back to the simulator.

The PPS and the simulator exchange xTensor objects111https://xtensor.readthedocs.io/en/latest/ through TCP or IPC using a generic FlatBuffers222http://google.github.io/flatbuffers/

protocol. On the PPS side, sampling is done using the deep learning framework PyTorch

After a variable has been sampled, using pyprob_cpp::sample, it is sent by the PPS to the simulator, at the same recording the simulator execution trace as a side effect. This allows the PPS to construct sample trace probabilities and other summary statistics (cf. Section 4).

Finally, the entry point to the simulator, i.e., main in C++, is replaced by a special forward call, in this case pyprob_cpp::forward. This allows the PPS to generate rollouts from the simulator remotely. A pictorial overview of this process is depicted in Figure 1.

create a trace per population member, in contrast to event-based simulators that create only a single trace per forward call (Baydin et al., 2018). This means that, e.g., in OpenMalaria, a standard scenario simulation rollout over the span of 3 years with a population of size n=5000 (Smith et al., 2008) will generate about four terabytes of raw trace data. Unlike the simulator used by Baydin et al. (2018), this amount of data cannot feasibly be kept in RAM, which makes a posteriori trace analysis very inefficient. In order to deal with the shortcomings of pyprob in a population-based simulator context, we therefore extend the framework to be able to do trace analysis on the fly.

to handle population-based simulators, the PPS can now track all stochastic random variables that are created within the simulator, which then allows us to generate trace plots and path probabilities associated to the execution paths of the program. The corresponding increase of simulator transparency helps reinstate much needed trust between policymakers and evidence-based methods.

Ensemble methods are commonly used in statistics in order to combine the predictive power of multiple models (Cameron et al., 2015; Smith et al., ). To this end, recent work has attempted to characterise the similarities and differences between two of the most advanced malaria epidemiology simulators, EMOD (Bershteyn et al., 2018) and OpenMalaria (Smith et al., 2008). Evaluation is usually done by comparing a number of output parameters across a range of hand-crafted standard scenarios reflecting different geographical locations across Africa (Smith et al., ).

In the following, we illustrate how our method introduces a novel introspection paradigm. By extracting trace graphs from population-based simulators, policymakers can ask specific questions about properties of the model trace flow and not just the outcomes of the model, thus providing additional interpretability to the decision-making process.

To illustrate the above, we present simulation output generated from a scenario resembling local conditions in the town of Ifakara, Tanzania. Both EMOD and OpenMalaria are configured to simulate a single population node of n=100 and assume constant climatic conditions and no migration over the simulation period of three years. Please refer to Figure 2 for the seasonal Entomological Inoculation Rate (EIR), a measure of infectivity.

We provide examples of the generated trace plots from the connection between the simulator and the PPS in Figure 3.

We can see from the addressing schemes A1,…,AN (Tables 2 and 1) what physical events are connected to each other and how outputs in EMOD are generated from a different set of procedures as compared to OpenMalaria. By having access to such diagrams, users can internally evaluate and scrutinize the decisions that the simulator is making.

This is important for policymakers, or general non-experts, as it not only details how we arrive at the given outputs, but it provides an understanding of which processes were most crucial in determining those outputs as can be seen from the path probabilities assigned to each of the vertices.

Additionally, by associating nodes in trace graphs representing the same physical processes within different models, the significance of model detail can be evaluated. For example, the full trace presented in Table 1 represent a sampling step associated with within-host dynamics of the malaria parasite Falciparum in OpenMalaria node A1. The same physical process also occurs in EMOD’s trace graph at position A7 (see Section 2). Comparisons like these could help developers better control model complexity, and even provide an alternative testing and debugging paradigm.

In this work we have demonstrated a method that enables one to hijack population-based simulators, extending the work of Baydin et al. (2018). We applied our method to two malaria-orientated population-based simulators and generated a variety of trace graphs. Finally, we have shown how our system enables policy makers and non-experts to analyse simulator outputs in a way previously unavailable in the field of epidemiology.

To extend our work further we aim to implement additional tools that will facilitate complicated inference procedures that condition on simulator output. We will also evaluate additional scenarios across Africa and Southeast Asia to better understand the similarities and differences between EMOD and OpenMalaria.

We thank Ewan Cameron of MAP at the Big Data Institute and the OpenMalaria team at the Swiss Tropical Health Institute for their time and help. BGH is supported by the EPRSC Autonomous Intelligent Machines and Systems grant. CSW is supported by the project Free the Drones (FreeD) under the Innovation Fund Denmark and Microsoft. YWT’s and TR’s research leading to these results has received funding from the European Research Council under the European Union’s Seventh Framework Programme (FP7/2007-2013) ERC grant agreement no. 617071. AGB and PH are supported by EPSRC/MURI grant EP/N019474/1 and AGB is also supported by Lawrence Berkeley National Lab.