The two-parametric Mittag-Leffler function (MLF), E_α,β, is fundamental to the study and simulation of fractional differential and integral equations. However, these functions are computationally expensive and their numerical implementations are challenging. In this paper, we present a unified framework for developing global rational approximants of E_α,β(-x), x>0, with { (α,β): 0 < α≤ 1, β≥α, (α,β) (1,1) }. This framework is based on the series definition and the asymptotic expansion at infinity. In particular, we develop three types of fourth-order global rational approximations and discuss how they could be used to approximate the inverse function. Unlike existing approximations which are either limited to MLF of one parameter or of low accuracy for the two-parametric MLF, our rational approximants are of fourth order accuracy and have low percentage error globally. For efficient utilization, we study the partial fraction decomposition and use them to approximate the two-parametric MLF with a matrix argument which arise in the solutions of fractional evolution differential and integral equations. 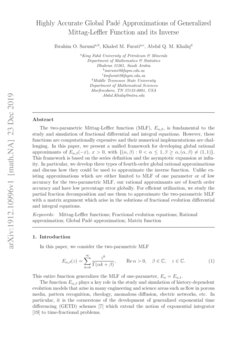 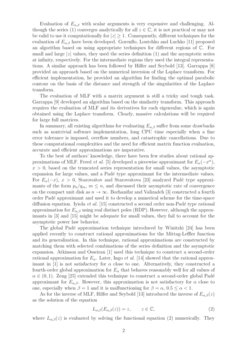 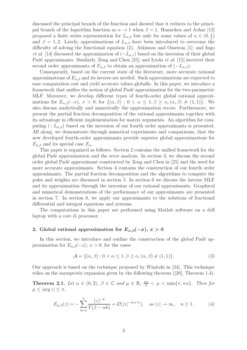 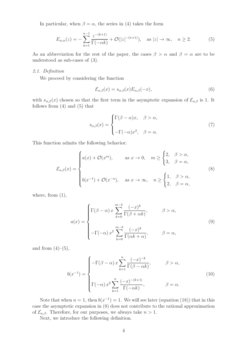 In this paper, we consider the two-parametric MLF

This entire function generalizes the MLF of one-parameter, Eα=Eα,1.

plays a key role in the study and simulation of history-dependent evolution models that arise in many engineering and science areas such as flow in porous media, pattern recognition, rheology, anomalous diffusion, electric networks, etc. In particular, it is the cornerstone of the development of generalized exponential time differencing (GETD) schemes

Garrappa:2011 which extend the notion of exponential integrator Minchev:2005 to time-fractional problems.

Evaluation of Eα,β with scalar arguments is very expensive and challenging. Although the series (1) converges analytically for all z∈C, it is not practical or may not be valid to use it computationally for |z|≥1. Consequently, different techniques for the evaluation of Eα,β have been developed. Gorenflo, Loutchko and Luchko Gorenflo:2002 proposed an algorithm based on using appropriate techniques for different regions of C. For small and large \absz values, they used the series definition (1) and the asymptotic series at infinity, respectively. For the intermediate regions they used the integral representations. A similar approach has been followed by Hilfer and Seybold Hilfer:2006 . Garrappa Garrappa:2015 provided an approach based on the numerical inversion of the Laplace transform. For efficient implementation, he provided an algorithm for finding the optimal parabolic contour on the basis of the distance and strength of the singularities of the Laplace transform.

The evaluation of MLF with a matrix argument is still a tricky and tough task. Garrappa Garrappa:2018

developed an algorithm based on the similarity transform. This approach requires the evaluation of MLF and its derivatives for each eigenvalue, which is again obtained using the Laplace transform. Clearly, massive calculations will be required for large full matrices.

In summary, all existing algorithms for evaluating Eα,β suffer from some drawbacks such as nontrivial software implementation, long CPU time especially when a fine error tolerance is imposed, overflow numbers, and catastrophic cancellations. Due to these computational complexities and the need for efficient matrix function evaluation, accurate and efficient approximations are imperative.

To the best of authors’ knowledge, there have been few studies about rational approximations of MLF. Freed et al.Freed:2002 developed a piecewise approximant for Eα(−xα), x>0, based on the truncated series representation for small values, the asymptotic expansion for large values, and a Padé type approximant for the intermediate values. For Eα(−x), x>0, Starovoitov and Starovoitova Starovoitov:2007 analyzed Padé type approximants of the form pn/qm, m≤n, and discussed their asymptotic rate of convergence on the compact unit disk as n→∞. Borhanifar and Valizadeh Borhanifar:2015 constructed a fourth order Padé approximant and used it to develop a numerical scheme for the time-space diffusion equation. Iyiola et al.Iyiola:2018real constructed a second order non-Padé type rational approximation for Eα,β using real distinct poles (RDP). However, although the approximants in Borhanifar:2015 and Iyiola:2018real might be adequate for small values, they fail to account for the asymptotic power law behavior.

where Lα,β(z) is evaluated by solving the functional equation (2) numerically. They discussed the principal branch of the function and showed that it reduces to the principal branch of the logarithm function as α→1 when β=1. Hanneken and Achar Hanneken:2014 proposed a finite series representation for Lα,β but only for some values of α∈(0,12) and β=1,2. Lately, approximations of Lα,β have been introduced to overcome the difficulty of solving the functional equation (2). Atkinson and Osseiran Atkinson:2011 ; and Ingo et al.Ingo:2017 discussed the approximation of (−Lα,1) based on the inversion of their global Padé approximants. Similarly, Zeng and Chen Zeng2015 ; and Iyiola et al.Iyiola:2018real inverted their second order approximants of Eα,β to obtain an approximation of (−Lα,β).

This paper is organized as follows. Section 2 contains the unified framework for the global Padé approximation and the error analysis. In section 3, we discuss the second order global Padé approximant constructed by Zeng and Chen in Zeng2015 and the need for more accurate approximants. Section 4 contains the construction of our fourth order approximants. The partial fraction decomposition and the algorithms to compute the poles and weights are discussed in section 5. In section 6 we discuss the inverse MLF and its approximation through the inversion of our rational approximants. Graphical and numerical demonstrations of the performance of our approximants are presented in section 7. In section 8, we apply our approximants to the solutions of fractional differential and integral equations and systems.

The computations in this paper are performed using Matlab software on a dell laptop with a core i5 processor.

In this section, we introduce and outline the construction of the global Padé approximation for Eα,β(−x), x>0, for the cases

Our approach is based on the technique proposed by Winitzki in Winitzki:2003 . This technique relies on the asymptotic expansion given by the following theorem (Podlubny:1999a , Theorem 1.4).

In particular, when β=α, the series in (4) takes the form

As an abbreviation for the rest of the paper, the cases β>α and β=α are to be understood as sub-cases of (3).

We proceed by considering the function

with sα,β(x) chosen so that the first term in the asymptotic expansion of Eα,β is 1. It follows from (4) and (5) that

This function admits the following behavior:

Note that when n=1, then b(x−1)=1. We will see later (equation (18)) that in this case the asymptotic expansion in (8) does not contribute to the rational approximation of Eα,β. Therefore, for our purposes, we always take n>1.

Next, we introduce the following definition.

Consider Eα,β with (α,β)∈A. Let m and n be positive integers such that

where p and q are polynomials of degree ν,

Next, we present the procedure for constructing Rm,nα,β(x).

Let m and n be as in (11). We seek a rational approximation of the form

where ν is as in (13). This means that 2ν+1 coefficients are to be determined.

To find the other 2ν unknowns {pi,qi}ν−1i=0, we solve the system of linear equations obtained by satisfying the requirement (14) which takes the form

must vanish and we obtain another system of n−1 linear equations. Collectively, (16) and (17) yield a linear system of m+n−1 (= 2ν) equations which are then solved for the 2ν unknowns. By inspection, we have

We will see later (Remark 2.3) that for controlling the approximation error we must have m>n. Table (1) provides the order of approximations for the types (m,n) with m>n>1 and m+n is odd.

In all the numerical experiments and comparisons throughout this paper, the term ”exact” values of MLF refers to the values computed using the routines discussed in Garrappa:2015 and Garrappa:2018 .

For completeness, we provide here an overview of the second order global Padé approximant R3,2α,β(x) constructed by Zeng and Chen in Zeng2015 . The approximant is given by

As shown in Figures 1 and 2, the approximation R3,2α,β could be reasonable for small values of α, however, it is not adequate otherwise.

The unknown coefficients are obtained by applying (16) and (17). Below we present the systems for these coefficients for the different types.

For β=α the coefficients satisfy the system

For β=α, the coefficients satisfy the system

For β=α, the coefficients satisfy the system

Although the type (m,n) of the fourth order global Padé approximant of Eα(−x) by Ingo et al.Ingo:2017 is not given, based on their construction, we expect the type to be a special case of one of the approximants above when β=1.

Computing of the poles and weights is outlined in the following algorithm.