Higher-order MRFs based image super resolution: why not MAP?

A trainable filter-based higher-order Markov Random Fields (MRFs) model - the so called Fields of Experts (FoE), has proved a highly effective image prior model for many classic image restoration problems. Generally, two options are available to incorporate the learned FoE prior in the inference procedure: (1) sampling-based minimum mean square error (MMSE) estimate, and (2) energy minimization-based maximum a posteriori (MAP) estimate. This letter is devoted to the FoE prior based single image super resolution (SR) problem, and we suggest to make use of the MAP estimate for inference based on two facts: (I) It is well-known that the MAP inference has a remarkable advantage of high computational efficiency, while the sampling-based MMSE estimate is very time consuming. (II) Practical SR experiment results demonstrate that the MAP estimate works equally well compared to the MMSE estimate with exactly the same FoE prior model. Moreover, it can lead to even further improvements by incorporating our discriminatively trained FoE prior model. In summary, we hold that for higher-order natural image prior based SR problem, it is better to employ the MAP estimate for inference. 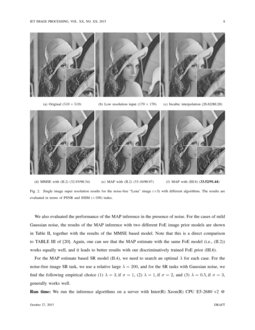 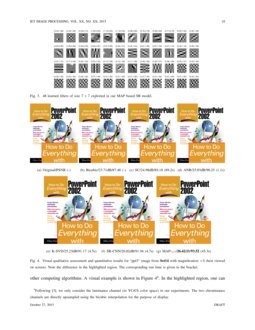 Ensemble Super-Resolution with A Reference Dataset

A higher-order MRF based variational model for multiplicative noise reduction

Image super-resolution (SR) is one of the long-standing and active topic...
Haichao Zhang, et al. ∙

Markov Random Fields (MRFs) based models have a long history in low-level computer vision problems, which treat the image as a random field

. It is well-known that MRFs are particularly effective for image prior modeling in image processing. In a MRF-based image prior model, the probability of a whole image is defined based on the potential (or energy) of the overlapping local cliques.

An elegant MRF-based image prior model, called Fields of Experts (FoE) was recently proposed by Roth and Black [8]. The proposed FoE model is defined by (1) a heavy-tailed potential function, which is derived from the observation that the filter response of natural images exhibit heavy-tailed distribution when applying derivative filters onto them, (2) a set of linear filters, which are trained from image samples.

In a recent paper [16], the FoE prior model was exploited in the context of image super resolution. The authors also proposed to employ the MMSE estimate in the inference procedure instead of the MAP estimate. With the MMSE estimate, the FoE-based SR model demonstrates a state-of-the-art SR algorithm. However, it is well known that the sampling based approach is very time consuming, alluding to the fact that the FoE-based SR model is not appealing for practical applications.

It is generally true that the MMSE estimate is a better alternative than MAP, as it can exploit the uncertainty of the model, especially in the case of multimodal distribution with multiple peaks. However, in practice it is usually hard to find an accurate solution for the MMSE estimate due to the difficulty of taking the expectations over entire images. As a consequence, the MAP inference, which seeks the maximum peak, might have the possibility to work equally well for some problems.

To sum up, our experimental findings suggest us to exploit the MAP inference for solving the FoE prior-based image super resolution problem, because (1) there is no performance loss by using this simpler inference criterion, and (2) the MAP inference has an apparent advantage of high efficiency.

Ii MAP inference of FoE image prior based SR

In a typical image super resolution task, the low-resolution (LR) image is generated from a high-resolution (HR) image using the following formulation

where p(x) is the probability density of an image x under the FoE framework, written as

where αi,j are the normalized weights of the Gaussian component with scale sj

According to the posterior (II.1), [16] used the sampling-based MMSE estimation to recover the underlying HR image x. In this letter, we consider the MAP estimate. With the MAP estimation, the FoE-based SR task is formulated as the following energy minimization problem

Gradient-based algorithms are applicable to solve the minimization problem (II.3). First, we need to calculate the gradient ∇xE, which is given as

In our work, we consider a newly developed non-convex optimization - iPiano [7] to solve the above minimization problem, instead of the commonly used conjugate gradient (CG) algorithm. We find that the iPiano algorithm is significantly faster than CG. We refer the interested readers to [7] for more details about the iPiano algorithm.

We mainly conducted two types of experiments. The first type is to perform a direct comparison between the MAP estimate and the MMSE estimate for the FoE based SR task. The second type is to compare the MAP based SR model to very recent state-of-the-art SR approaches. The corresponding implementations are all from publicly available codes provided by the authors, and are used as is.

Iii-a Comparison between the MAP and MMSE estimate

In order to conduct a fair comparison with the MMSE estimation, we first considered the MAP estimation with exactly the same image prior model exploited in [16] (8 filters of size 3×3 with GSMs potential). We repeated the experiments presented in the TABLE I of [16], where eight noise-free images were upsampled with a zooming factor of 3. The results of the MMSE and MAP estimates are shown in Table I. One can see that the MAP estimate using the same image prior model performs equally well compared to the MMSE estimate, in terms of PSNR and SSIM index111 Note that we were not able exactly reproduce the results presented in [16] due to the randomness of the sampling-based approach. We actually achieved slightly different results. .

We then exploited a discriminatively trained FoE prior for the MAP-based SR model to further investigate its performance. The discriminatively trained FoE prior has the same model capacity, and is directly optimized based on the MAP estimate in the context of Gaussian denoising. We employed the Student-t based FoE model trained in our previous work [2], which is defined as

We also evaluated the performance of the MAP inference in the presence of noise. For the cases of mild Gaussian noise, the results of the MAP inference with two different FoE image prior models are shown in Table II, together with the results of the MMSE based model. Note that this is a direct comparison to TABLE III of [16]. Again, one can see that the MAP estimate with the same FoE model (i.e., (II.2)) works equally well, and it leads to better results with our discriminatively trained FoE prior (III.1).

Run time: We run the inference algorithms on a server with Inter(R) Xeon(R) CPU E5-2680 v2 @ 2.80GHz. For the SR task of upsampling an image of size 85×85 to the size of 255×255, the average computation time per iteration of the MMSE-based algorithm is 87s. Typically, the MMSE estimate takes 100 iterations, and therefore for this SR task, it requires about ∼2.4h, making this approach hardly appealing for practical application.

In contrast, the MAP inference is much faster. The average computation time per iteration of the MAP inference is 0.039s in the case of the Student-t based FoE prior (III.1)222 With the same model capacity of 8 filters of size 3×3. Typically, it takes 150∼200 iterations to solve the resulting non-convex minimization problem333Also note that the required iterations is dramatically reduced by using the iPiano algorithm, compared to the usual CG algorithm used in previous works, such as [8, 10], where the iterative algorithm has to run ∼5000 iterations. . As a consequence, the MAP inference with the Student-t based FoE prior is able to accomplish the same SR task in 7s, which is dramatically faster than the MMSE inference (∼2.4h). Implementation will be available at our homepage (www.GPU4Vision.org) after acceptance.

Moreover, as demonstrated in our previous works [1, 2], the MAP inference of the FoE prior based models can be easily implemented on GPU for parallel computation, which can generally obtain an approximate speedup factor of 40×.

In order to conduct a comprehensive evaluation for the MAP based SR model, we further compared it with very recent state-of-the-art SR approaches: the K-SVD based method [14], the ANR (Anchored Neighborhood Regression) based method [12] and deep convolutional network based method - SRCNN [3]. In order to perform a fair comparison with these methods, we strictly obey the same test protocols as in [12]. We used the same test sets - Set14 and Set5 to evaluate the upscaling factor of 3. For the MAP based SR model, we incorporated a FoE prior model with larger filter size and more filters (shown in Figure 3, 48 filters of size 7×7), which is trained in [2]. Replacing the FoE prior model show in Figure 1 with this new FoE model having increased model capacity can improve the performance of the MAP based SR model.

The SR results on Set14 and Set5 are summarized in Table III. We can see that the FoE based SR model with filters of size 7×7 achieves similar average PSNR as the SRCNN method, and outperforms other competing algorithms. A visual example is shown in Figure 4444Following [3]

, we only consider the luminance channel (in YCrCb color space) in our experiments. The two chrominance channels are directly upsampled using the bicubic interpolation for the purpose of display.

. In the highlighted region, one can see that our SR method achieve much clear edges than other approaches. In summary our MAP7×7 model obtains strongly competitive quality performance to very recent state-of-the-art SR methods.

In the context of higher-order MRF based models, it is generally true that the MAP estimate, which only seeks for the posterior mode, could not generally exploit the full potential offered by the probabilistic modeling, while the MMSE estimate, which directly draw samples from the probability model, should be more powerful. On the other hand, it is well-known that the sampling based MMSE estimation is very slow, making the corresponding methods hardly appealing for practical applications if one has to stick to the MMSE inference.

In this letter, we have concentrated on the higher-order MRFs based SR problem, and evaluated the performance of the MAP estimate in inference. We found that the MAP estimate can work equally well compared to MMSE in the presence of the same FoE prior, despite of the non-convexity of the resulting optimization problem. We believe the reason is two-folds: first, the exploited iPiano algorithm which is an effective non-convex optimization algorithm, helps us reach the MAP mode in a short time; secondly, in practice one is not able to obtain an accurate solution for the MMSE estimate. In addition, we found that the performance of MAP estimate can be further boosted by using discriminatively trained FoE prior models. As a consequence, the resulting MAP7×7 model, which involves 48 filters of size 7×7 can lead to strongly competitive results to very recent state-of-the-art SR methods. Therefore, concerning the higher-order MRFs based SR task, we suggest to exploit the MAP estimate for inference because there is no performance loss by using this simpler inference criterion while it has an obvious advantage of high efficiency.

Furthermore, it is notable to point out that the findings about the MAP estimate presented in this letter strengthen our arguments drawn based on the Gaussian denoising problem in our previous works [1, 2]. We have show in [1, 2] that the MAP-based denoising model with our discriminatively trained FoE prior leads to the best results among the MRF-based systems, including MMSE based models. Therefore, we believe that MAP-based denoising model does not perform well in previous works, e.g., [10, 9] just because they have not obtained a good FoE prior well-suited for the MAP inference.

In summary, we believe that in the context of higher-order MRF image prior based modeling for image restoration problems, it is a better choice to make use of the MAP estimate, together with the discriminatively trained FoE prior.