Recently, rate-1/ω zero-terminated and tail-biting convolutional codes (ZTCCs and TBCCs) with cyclic-redundancy-check (CRC)-aided list decoding have been shown to closely approach the random-coding union (RCU) bound for short blocklengths. This paper designs CRCs for rate-(ω-1)/ω CCs with short blocklengths, considering both the ZT and TB cases. The CRC design seeks to optimize the frame error rate (FER) performance of the code resulting from the concatenation of the CRC and the CC. Utilization of the dual trellis proposed by Yamada et al. lowers the complexity of CRC-aided serial list Viterbi decoding (SLVD) of ZTCCs and TBCCs. CRC-aided SLVD of the TBCCs closely approaches the RCU bound at a blocklength of 128. 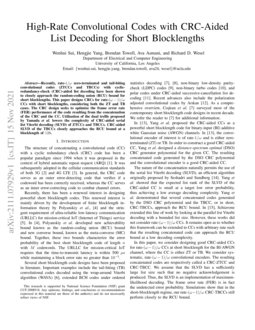 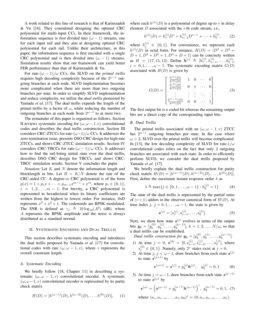 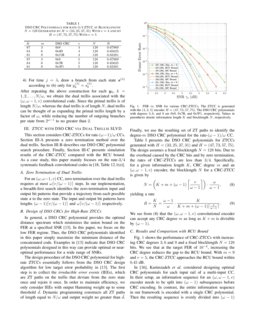 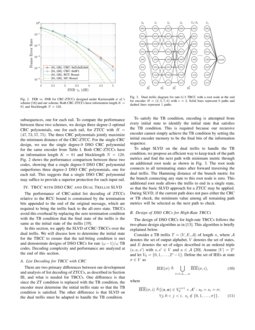 The structure of concatenating a convolutional code (CC) with a cyclic redundancy check (CRC) code has been a popular paradigm since 1994 when it was proposed in the context of hybrid automatic repeat request (ARQ) [13]. It was subsequently adopted in the cellular communication standards of both 3G [17] and 4G LTE [10]. In general, the CRC code serves as an outer error-detecting code that verifies if a codeword has been correctly received, whereas the CC serves as an inner error-correcting code to combat channel errors.

Recently, there has been a renewed interest in designing powerful short blocklength codes. This renewed interest is mainly driven by the development of finite blocklength information theory by Polyanskiy et al., [12] and the stringent requirement of ultra-reliable low-latency communication (URLLC) for mission-critical IoT (Internet of Things) service [5]. In [12], Polyanskiy et al.

n with M codewords. The URLLC for mission-critical IoT requires that the time-to-transmit latency is within 500 μs while maintaining a block error rate no greater than 10−5.

In [19], Yang et al. proposed the CRC-aided CCs as a powerful short blocklength code for binary-input (BI) additive white Gaussian noise (AWGN) channels. In [19], the convolutional encoder of interest is of rate-1/ω and is either zero-terminated (ZT) or TB. In order to construct a good CRC-aided CC, Yang et al. designed a distance-spectrum optimal (DSO) CRC generator polynomial for the given CC. The resulting concatenated code generated by the DSO CRC polynomial and the convolutional encoder is a good CRC-aided CC.

The nature of the concatenation naturally permits the use of the serial list Viterbi decoding (SLVD), an efficient algorithm originally proposed by Seshadri and Sundberg [15]. Yang et al. showed that the expected list rank of the SLVD of the CRC-aided CC is small at a target low error probability, thus achieving a low average decoding complexity. Yang et al. demonstrated that several concatenated codes generated by the DSO CRC polynomial and the TBCC, or in short, CRC-TBCCs, approach the RCU bound. In [14], Schiavone extended this line of work by looking at the parallel list Viterbi decoding with a bounded list size. However, these works did not consider rate-(ω−1)/ω CCs. It remains open as to whether this framework can be extended to CCs with arbitrary rate such that the resulting concatenated code can approach the RCU bound at a low decoding complexity.

In this paper, we consider designing good CRC-aided CCs for rate-(ω−1)/ω CCs at short blocklength for the BI-AWGN channel, where the CC is either ZT or TB. We consider systematic, rate-(ω−1)/ω convolutional encoders. The resulting concatenated codes are respectively called a CRC-ZTCC and CRC-TBCC. We assume that the SLVD has a sufficiently large list size such that no negative acknowledgement is produced. Thus, the SLVD is an implementation of maximum-likelihood decoding. The frame error rate (FER) is in fact the undetected error probability. Simulations show that in the short-blocklength regime, our rate-(ω−1)/ω CRC-TBCCs still perform closely to the RCU bound.

A work related to this line of research is that of Karimzadeh & Vu [6]. They considered designing the optimal CRC polynomial for multi-input CCs. In their framework, the information sequence is first divided into (ω−1) streams, one for each input rail and they aim at designing optimal CRC polynomial for each rail. Unlike their architecture, in this paper, the information sequence is first encoded with a single CRC polynomial and is then divided into (ω−1) streams. Simulation results show that our framework can yield better FER performance than that of Karimzadeh & Vu.

Notation: Let K and N denote the information length and blocklength in bits. Let R=K/N denote the rate of the CRC-aided CC. A degree-m CRC polynomial is of the form p(x)=1+p1x+⋯+pm−1xm−1+xm, where pi∈{0,1}, i=1,2,…,m−1. For brevity, a CRC polynomial is represented in hexadecimal when its binary coefficients are written from the highest to lowest order. For instance, 0xD represents x3+x2+1. The codewords are BPSK modulated. The SNR is defined as γs≜10log10(A2) (dB), where A represents the BPSK amplitude and the noise is always distributed as a standard normal.

where each h(i)(D) is a polynomial of degree up to v in delay element D associated with the i-th code stream, i.e.,

The first output bit is a coded bit whereas the remaining output bits are a direct copy of the corresponding input bits.

The primal trellis associated with an (ω,ω−1,v) ZTCC has 2ω−1 outgoing branches per state. In the case where ω>2, SLVD over the primal trellis will become complicated. In [19], the low decoding complexity of SLVD for rate-1/ω convolutional codes relies on the fact that only 2 outgoing branches are associated with each state. In order to efficiently perform SLVD, we consider the dual trellis proposed by Yamada et al. [18].

The state of the dual trellis is represented by the partial sums of (v+1) adders in the observer canonical form of H(D). At time index j, j=0,1,…,ω−1, the state is given by

The design procedure of the DSO CRC polynomial for high-rate ZTCCs essentially follows from the DSO CRC design algorithm for low target error probability in [19]. The first step is to collect the irreducible error events (IEEs), which are ZT paths on the trellis that deviate from the zero state once and rejoin it once. In order to maintain efficiency, we only consider IEEs with output Hamming weight up to some threshold ~d. Dynamic programming constructs all ZT paths of length equal to N/ω and output weight no greater than ~d. Finally, we use the resulting set of ZT paths to identify the degree-m DSO CRC polynomial for the rate-(ω−1)/ω CC.

Table I presents the DSO CRC polynomials for ZTCCs generated with H=(33,25,37,31) and H=(47,73,57,75). The design assumes a fixed blocklength N=128 bits. Due to the overhead caused by the CRC bits and by zero termination, the rates of CRC-ZTCCs are less than 3/4. Specifically, for a given information length K, CRC degree m and an (ω,ω−1,v) encoder, the blocklength N for a CRC-ZTCC is given by

Fig. 1 shows the performance of CRC-ZTCCs with increasing CRC degrees 3,6 and 9 and a fixed blocklength N=128 bits. We see that at the target FER of 10−4, increasing the CRC degree reduces the gap to the RCU bound. With m=9 and v=5, the CRC-ZTCC approaches the RCU bound within 0.45 dB.

In this section, we apply the SLVD of CRC-TBCCs over the dual trellis. We will discuss how to determine the initial state for the TBCC to ensure that the tail-biting condition is met and demonstrate designs of DSO CRCs for rate (ω−1)/ω TB codes. Decoding complexity and performance are analyzed at the end of this section.

To adapt SLVD on the dual trellis to handle the TB condition, we propose an efficient way to keep track of the path metrics and find the next path with minimum metric through an additional root node as shown in Fig. 3. The root node connects to all terminating states after forward traversing the dual trellis. The Hamming distance of the branch metric for the branch connecting any state to this root node is zero. This additional root node allows the trellis to end in a single state, so that the basic SLVD approach for a ZTCC may be applied. During SLVD, if the current path does not pass either the CRC or TB check, the minimum value among all remaining path metrics will be selected as the next path to check.

The design of DSO CRCs for high-rate TBCCs follows the two-phase design algorithm as in [19]. This algorithm is briefly explained below.

The IEEs at state σ can be thought of as “building blocks” for an arbitrarily long TB path that starts and ends at the same state σ.

The first phase is called the collection phase, during which the algorithm collects IEE(σ) with output Hamming weight no greater than the threshold ~d over a sufficiently long TB trellis. The second phase is called the search phase, during which the algorithm first reconstructs all TB paths of length N/ω and output weight no greater than ~d via concatenation of the IEEs and circular shifting of the resulting path. Then, using these TB paths, the algorithm searches for the degree-m DSO CRC polynomial by maximizing the minimum distance of the undetected TB path.

Table II presents the DSO CRC polynomials for TBCCs generated with H=(33,25,37,31) and H=(47,73,57,75). The design assumes a fixed blocklength N=128. TB encoding avoids the rate loss caused by the overhead of the zero termination. Specifically, for a given information length K, CRC degree m and an (ω,ω−1,v) encoder, the blocklength N for a CRC-TBCC is given by

As noted in [19], the overall average complexity of the SLVD can be decomposed into three components:

CSSV is the complexity of add-compare-select (ACS) operations and the initial traceback operation. For CRC-ZTCCs,

For CRC-TBCCs, this quantity is given by

The third component, which is the same for ZT and TB, is

where E[I] is the expected number of insertions to maintain the sorted list of path metric differences. For CRC-ZTCCs,

In the above expressions, c1 and c2 are two computer-specific constants that characterize implementation-specific differences in the implemented complexity of traceback and list insertion (respectively) as compared to the ACS operations of Viterbi decoding. In this paper, we assume that c1=c2=1 and use (20) and (21

Fig. 5 shows the FER vs. SNR for three CRC-TBCCs at blocklength N=128. At the target FER of 10−4, the SNR gap is reduced to 0.15 dB for the CRC-TBCC with m=9. Fig. 6 shows the trade-off between the expected list rank E[L] and the FER. We see that the expected list rank E[L]<4 for achieving the target FER of 10−4, implying a low average decoding complexity of SLVD.

This paper shows list decoding of a rate-(ω−1)/ω CC concatenated with a DSO CRC yields block codes that approach the RCU bound for the BI-AWGN. CRC-TBCCS have FERs within 0.15 dB of RCU bound for FER 10−4 at blocklength N=128 bits. Adding a bit of CRC can improve FER far more than adding an additional memory element to the CC.

The authors thank Dariush Divsalar for helpful discussions on construction of the dual trellis. We thank Ethan Liang and Linfang Wang for guidance and mentorship. Thanks to Mai Vu and Mohammad Karimzadeh for helpful collaboration.