For a passive direction of arrival (DoA) measurement system using massive multiple input multiple output (MIMO), it is mandatory to infer whether the emitter exists or not before performing DOA estimation operation. Inspired by the detection idea from radio detection and ranging (radar), three high-performance detectors are proposed to infer the existence of single passive emitter from the eigen-space of sample covariance matrix of receive signal vector. The test statistic (TS) of the first method is defined as the ratio of maximum eigen-value (Max-EV) to minimum eigen-value (R-MaxEV-MinEV) while that of the second one is defined as the ratio of Max-EV to noise variance (R-MaxEV-NV). The TS of the third method is the mean of maximum eigen-value (EV) and minimum EV(M-MaxEV-MinEV). Their closed-form expressions are presented and the corresponding detection performance is given. Simulation results show that the proposed M-MaxEV-MinEV and R-MaxEV-NV methods can approximately achieve the same detection performance that is better than the traditional generalized likelihood ratio test method with false alarm probability being less than 0.3. 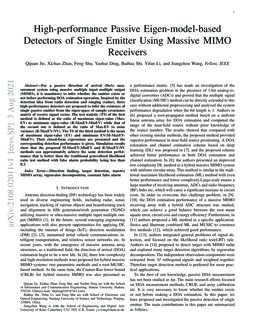 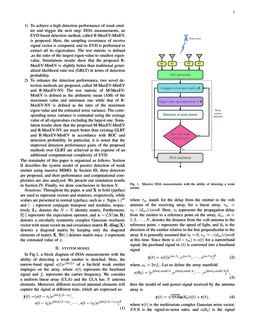 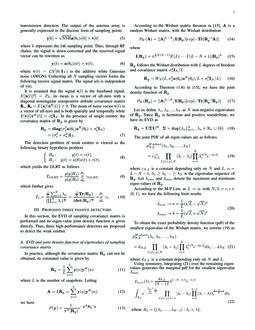 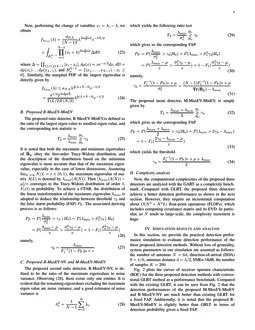 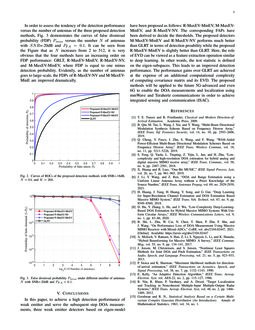 Antenna direction-finding (DF) technology has been widely used in diverse engineering fields, including radar, sonar, navigation, tracking of various objects and beamforming track and alignment in fifth generation/sixth generation (5G/6G) utilizing massive or ultra-massive multiple input multiple output (MIMO) [1]. In the future, several emerging engineering applications will also present opportunities for applying DF, including the internet of things (IoT), direction modulation (DM) [2]-[3], unmanned aerial vehicle communications, intelligent transportation, and wireless sensor networks etc. In recent years, with the emergence of massive antenna array structures, as a traditional field, the direction of arrival (DOA) estimation begin to be a new life. In [4], three low-complexity and high-resolution methods were proposed for hybrid massive MIMO systems: two parametric methods and a root-MUSIC-based method. At the same time, the Cramer-Rao lower bound (CRLB) for hybrid massive MIMO was also presented as a performance metric. [5] has made an investigation of the DOA estimation problem in the presence of 1-bit analog-to-digital converters (ADCs) and proved that the multiple signal classification (MUSIC) method can be directly extended to this case without additional preprocessing and analyzed the system performance degradation when the bit length is 1. Authors in [6]

proposed a root-propagator method based on a uniform linear antenna array for DOA estimation and computed the range of the near-field source without prior knowledge of the source number. The results showed that compared with other existing similar methods, the proposed method provided superior performance in near-field source positioning. A DOA estimation and channel estimation scheme based on deep learning (DL) was proposed in

[7], and the proposed scheme achieved better performance in both DOA estimation and channel estimation. In [8], the authors presented an improved low-complexity DL method to a hybrid massive MIMO system with uniform circular array. This method is similar to the traditional maximum likelihood estimation (ML) method with even better performance and lower complexity.Large-scale means a large number of receiving antennas, ADCs and radio frequency (RF) links etc, which will cause a significant increase in circuit costs. In order to overcome this challenge problem, in [9]-[10], the DOA estimation performance of a massive MIMO receiving array with a hybrid ADC structure was studied, which can achieve a good balance between the root mean square error, circuit cost and energy efficiency. Furthermore, in[11] authors proposed a ML method in a specific application. Stoica and Sharman combined ML and MUSIC to construct five methods [12], which achieved good performance.

In [13], authors integrated general problems of signal detection, and focused on the likelihood ratio test(LRT) rule. Authors in [14] proposed to detect target with MIMO radar and explored many target detection algorithms, by eigenvalue decomposition. The independent observation components were extracted from M orthogonal signals and weighted together. Therefore target detection method is preferred for more practical applications.

To the best of our knowledge, passive DOA measurement has not been studied so far. The main research efforts focused on DOA measurement methods, CRLB, and array calibration etc. It is very necessary to know whether the emitter exists or not before making a DOA estimation. In this paper, we have proposed and investigated the passive detection of single emitter. The main contributions in this paper are summarized as follows:

The remainder of this paper is organized as follows. Section II describes the system model of passive detection of weak emitter using massive MIMO. In Section III, three detectors are proposed, and their performance and computational complexities are also analyzed. We present our simulation results in Section IV. Finally, we draw conclusions in Section V.

Notations: Throughout the paper, x and X in bold typeface are used to represent vectors and matrices, respectively, while scalars are presented in normal typeface, such as x. Signs (⋅)H and |⋅| represent conjugate transpose and modulus, respectively. IN denotes the N×Nidentity matrix. Furthermore, E[⋅] represents the expectation operator, and x∼CN(m,R) denotes a circularly symmetric complex Gaussian stochastic vector with mean vector m and covariance matrix R. diag(X) denotes a diagonal matrix by keeping only the diagonal elements of matrix X. Tr(⋅) denotes matrix trace. ^x represents the estimated value of x.

In Fig.1, a block diagram of DOA measurements with the ability of detecting a weak emitter is sketched. Here, the narrow-band signal s(t)ej2πfct of a far-field weak emitter impinges on the array, where s(t) represents the baseband signal and fc represents the carrier frequency. We consider a uniform linear array (ULA) and the ULA has N antenna elements. Moreover, different received antennal elements will capture the signal at different time, which are expressed as:

where τm stands for the delay from the emitter to the mth antenna of the receiving array, for a linear array, τm=τ0−(dm/c)sinθ. Here, τ0 represents the propagation delay from the emitter to a reference point on the array, dm, m=1,2,⋯,N, denotes the distance from the mth antenna to the reference point, c represents the speed of light, and θ0 is the direction of the emitter relative to the line perpendicular to the array. It is generally assumed that τ0=0, τm=−(dm/c)sinθ at this time. Since there is s(t−τm)≈s(t) for a narrowband signal, the passband signal in (II) is converted into a baseband signal

where ωc=2πfc. Let us define the array manifold

where v(t) is the multivariate complex Gaussian noise vector, SNR

is the signal-to-noise ratio, and

a(θ0) is the signal transmission direction. The output of the antenna array is generally expressed in the discrete form of sampling points

where k represents the kth sampling point. Thus, through RF chains, the signal is down-converted and the received signal vector can be rewritten as

It is assumed that the signal s(l) is the baseband signal, E[|s(l)|2]=PS, its mean is a vector of all-zero with a diagonal nonsingular semipositive definite covariance matrix Rs, Rs=E{s(l)sH(l)}≥0. The mean of noise vector v(l) is a vector of all-zero and is both spatially and temporally white E[v(l)vH(l)]=σ2vIN. In the presence of single emitter, the covariance matrix of Ry is given by

which yields the GLRT as follows

In this section, the EVD of sampling covariance matrix is performed and its eigen-value joint density function is given directly. Thus, three high-performance detectors are proposed to detect the weak emitter.

In practice, although the covariance matrix Ry can not be obtained, its estimated value is given by

where L is the number of snapshots. Letting

Let us define λ1,λ2,...,λN as N non-negative eigenvalues of ^Ry. Since ^Ry is hermitian and positive semidefinite, we have its EVD as

The joint PDF of all eigen-values are as follows

where cN,L is a constant depending only on N and L. α=L−N−1, λ1≥λ2⋯≥λN is the eigenvalue sequence of ^Ry. Let λmax and λmin denote the maximum and minimum eigen-values of ^Ry

To obtain the exact probability density function (pdf) of the smallest eigenvalue of the Wishart matrix, we rewrite (

where dN,L is a constant depending only on N and L.

Now, performing the change of variables xi=λi−λ, we obtain

The proposed ratio detector, R-MaxEV-MinEV,is defined as the ratio of the largest eigen-value to smallest eigen-value, and the corresponding test statistic is

obey the first-order Tracy-Widom distribution, and the description of the distribution based on the minimum eigenvalue is more accurate than that of the maximum eigenvalue, especially in the case of lower dimensions. Assuming

in probability. To achieve a CFAR, the distribution of the linear transformation of the maximum eigenvalue

λmax is adopted to deduce the relationship between threshold γ2 and the false alarm probability (FAP) PF. The associated deriving process is as follows:

which yields the following ratio test

which gives us the corresponding FAP

The proposed mean detector, M-MaxEV-MinEV, is simply given by

which gives us the corresponding FAP

which yields the threshold

Now, the computational complexities of the proposed three detectors are analyzed with the GART as a complexity benchmark. Compared with GLRT, the proposed three detectors achieve a better detection performance as shown in the next section. However, they require an incremental computation about O(N3+N2L) float-point operations (FLOPs), which includes computing covariance matrix and its EVD. In particular, as N tends to large-scale, the complexity increment is huge.

Fig. 2 plots the curves of receiver operator characteristic (ROC) for the three proposed detection methods with conventional GLRT method as a performance benchmark. Compared with the existing GLRT, it can be seen from Fig. 2 that the detection performances of the proposed M-MaxEV-MinEV and R-MaxEV-NV are much better than existing GLRT for a fixed FAP. Additionally, it is noted that the proposed R-MaxEV-MinEV is slightly better than GRLT in terms of detection probability given a fixed FAP.

In order to assess the tendency of the detection performance versus the number of antennas of the three proposed detection methods, Fig. 3 demonstrates the curves of false dismissal probability (FDP) Pmiss versus the number N of antennas with SNR=-20dB and PFA=0.1. It can be seen from the Figure that as N increases from 2 to 512, it is very obvious that the four methods have an increasing order on FDP performance: GRLT, R-MaxEV-MinEV, R-MaxEV-NV, and M-MaxEV-MinEV, where FDP is equal to one minus detection probability. Evidently, as the number of antennas goes to large-scale, the FDPs of R-MaxEV-NV and M-MaxEV-MinE are improved dramatically.

In this paper, to achieve a high detection performance of weak emitter and serve the subsequent step DOA measurements, three weak emitter detectors based on eigen-model have been proposed as follows: R-MaxEV-MinEV, M-MaxEV-MinEV, and R-MaxEV-NV. The corresponding FAPs have been derived to decide the thresholds. The proposed detectors M-MaxEV-MinEV and R-MaxEV-NV performs much better than GLRT in terms of detection proability while the proposed R-MaxEV-MinEV is slightly better than GLRT. Here, the role of EVD can be viewed as a feature extraction operation similar to deep learning. In other words, the test statistic is defined on the eigen-subspaces. This leads to an improved detection performance. The performance gains over GLRT are achieved at the expense of an additional computational complexity of computing covariance matrix and its EVD. The proposed methods will be applied to the future 5G-advanced and even 6G to enable the DOA measurements and localization using mmWave and Terahertz communications in order to achieve integrated sensing and communication (ISAC).