A novel class of high-order linearly implicit energy-preserving exponential integrators are proposed for the nonlinear Schrödinger equation. We firstly done that the original equation is reformulated into a new form with a modified quadratic energy by the scalar auxiliary variable approach. The spatial derivatives of the system are then approximated with the standard Fourier pseudo-spectral method. Subsequently, we apply the extrapolation technique to the nonlinear term of the semi-discretized system and a linearized system is obtained. Based on the Lawson transformation, the linearized system is rewritten as an equivalent one and we further apply the symplectic Runge-Kutta method to the resulting system to gain a fully discrete scheme. We show that the proposed scheme can produce numerical solutions along which the modified energy is precisely conserved, as is the case with the analytical solution and is extremely efficient in the sense that only linear equations with constant coefficients need to be solved at every time step. Numerical results are addressed to demonstrate the remarkable superiority of the proposed schemes in comparison with other high-order structure-preserving method. 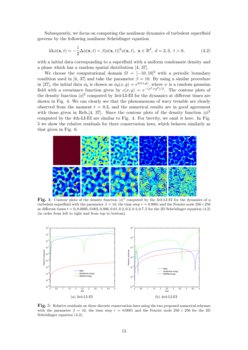 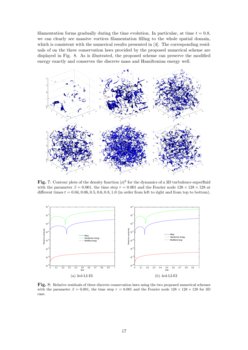 We consider the periodic initial-value problem for the Korteweg-de Vries...
Vassilios A. Dougalis, et al. ∙

We consider the nonlinear Schrödinger equation (NLSE) given as follows

where t is the time variable, x is the spatial variable, i=√−1 is the complex unit, ϕ:=ϕ(x,t) is the complex-valued wave function, L is the usual Laplace operator, β is a given real constant, and ϕ0(x) is a given initial data. The nonlinear Schrödinger equation (1.1) satisfies the following two invariants, that is mass

A numerical scheme that preserves one or more invariants of original systems is called an energy-preserving method. The earlier attempts to develop energy-preserving methods for NLSE can date back to 1981, when Delfour, Fortin, and Payre [22] constructed a two-level finite difference scheme (also called Crank-Nicolson finite difference (CNFD) scheme) which can satisfy the discrete analogue of conservation laws (1.2) and (1.3). Some comparisons with nonconservation schemes are investigated by Sanz-Serna and Verwer [49], which show the non-energy-preserving schemes may easily show nonlinear blow-up. Furthermore, it can be proven rigorously in mathematics that the CNFD scheme is second-order accurate in time and space [6, 7, 54]. In particular, we note that the discrete conservative laws play a crucial role in numerical analyses for numerical schemes of NLSE. However, it is fully implicit and at every time step, a nonlinear equation shall be solved by using a nonlinear iterative method and thus it may be time consuming. Zhang et al. [58] firstly proposed a linearly implicit Crank-Nicolson finite difference (LI-CNFD) scheme in which a linear system is to be solved at every time step. Thus it is computationally much cheaper than that of the CNFD scheme. The LI-CNFD scheme can satisfy a new discrete analogue of conservation laws (1.2) and (1.3) and its stability and convergence were analyzed in [54]. Up to now, the energy-preserving Crank-Nicolson schemes for NLSE are extensively extended and analyzed [3, 2, 17, 23, 26, 41, 56]. Another popular linearly implicit energy-preserving method is the relaxation finite difference scheme [9]

. In addition, the energy-preserving schemes for NLSE provided by the averaged vector field method

[47] and the discrete variational derivative method [21, 24] can be founded in [16, 38, 45, 25]. More recently, the scalar auxiliary variable (SAV) approach [51, 52] have been a particular powerful tool for the design of linearly implicit energy-preserving numerical schemes for NLSE [5]. Nevertheless, to our best knowledge, all of the schemes can achieve at most second-order in time.

It has been proven that no Runge-Kutta (RK) method can preserve arbitrary polynomial invariants of degree 3 or higher of arbitrary vector fields [14]. Thus, over that last decades, how to develop high-order energy-preserving methods for general conservation systems attracts a lot of attention. The notable ones include, but are not limited to, high-order averaged vector field (AVF) method [44, 47], Hamiltonian Boundary Value Methods (HBVMs) [11, 12] and energy-preserving continuous stage Runge-Kutta methods (CSRKs) [19, 29, 46, 55]. Actually, the HBVMs and CSRKs have been shown to be an efficient method to develop high-order energy-preserving schemes for NLSE [8, 43], however, the proposed schemes are fully implicit. In fact, at every time step, one needs to solve a large fully nonlinear system and thus it might lead to high computational costs.

Due to the high computational cost of the high-order fully implicit schemes, in the literatures, ones are devoted to construct energy-preserving explicit schemes for NLSE. Based on the the invariant energy quadratization (IEQ) approach [57] or the SAV approach and the projection method [13, 30, 28], the authors proposed some explicit energy-preserving schemes for NLSE [34, 59]. Such scheme is extremely easy to implement, however, it requires very small time step sizes. Especially, this limitation is more serious in 2D and 3D. The linearly implicit one which needs solve a linear equations at every time step, can remove this limitation. Li et al. proposed a class of linearly implicit schemes for NLSE, which can preserve the discrete analogue of conservation law (1.2) [42]. It involves solving linear equations with complicated variable coefficients at every time step and thus it may be very time consuming. Another way to achieve this goal is to combine the SAV approach with the extrapolation technique or the prediction-correction strategy [10].

In this paper, following the idea of the SAV approach, we firstly reformulate the original system (1.1) into a new system by introducing a new auxiliary variable, which satisfies a modified energy. The spatial discretization is then performed with the standard Fourier pseudo-spectral method [18, 50]. Subsequently, the extrapolation technique is employed to the nonlinear term of the semi-discrete system and a linearized system is obtained. Based on the Lawson transformation, the semi-discrete system is rewritten as an equivalent form and the fully discrete scheme is further obtained by using the symplectic RK method in time. We show that the proposed scheme can preserve the modified energy in the discretized level and at every time step, only a linear equations with constant coefficients is solved for which there is no existing references [10, 40] considering this issue.

The rest of this paper is organized as follows. In Section 2, we use the idea of the SAV approach to reformulate the system (1.1) into a new reformulation, which satisfies a modified energy. In Section 3, the linearly implicit high-order energy-preserving exponential scheme is proposed and its energy-preservation is discussed. In Section 4, several numerical examples are investigated to illustrate the efficiency of the proposed scheme. We draw some conclusions in Section 5.

In this section, we employ the SAV approach to recast the NLS equation (1.1) into a new reformulation which satisfies a quadratic energy conservation law. The resulting reformulation provides an elegant platform for developing high-order linearly implicit energy-preserving schemes.

Based on the idea of the SAV approach [51, 52], we introduce an auxiliary variable

where C0 is a constant large enough to make p well-defined for all ϕ. Here, (v,w) is the inner product defined by ∫Ωv¯wdx where ¯w represents the conjugate of w. Then, the Hamiltonian energy functional is rewritten as the following quadratic form

According to the energy variational principle, we obtain the following SAV reformulated system

with the consistent initial condition

where Re(u) represents the real part of u.

It is clear to see

3 The construction of the high-order linearly implicit exponential integrator

In this section, a class of high-order linearly implicit energy-preserving integrators are proposed for the SAV reformulated system (2.1). For simplicity, in this paper, we shall introduce our schemes in two space dimension, i.e., d=2 in (2.1). Generalizations to d=1 or 3 are straightforward.

be the solution vector; we also define discrete inner product and norm as

In addition, we denote ‘⋅’ as the element product of vectors ϕ and ψ, that is

Denote the interpolation space as

where gj(x) and gk(y) are trigonometric polynomials of degree Nx/2 and Ny/2, given, respectively, by

Taking the derivative with respect to x and y, respectively, and then evaluating the resulting expressions at the collocation points (xj,yk), we have

is the discrete Fourier transform (DFT) and

Then, we use the standard Fourier pseudo-spectral method to solve (2.1)

where Lh=INy⊗Dx2+Dy2⊗INx is the spectral differentiation matrix and ⊗ represents the Kronecker product.

The proof is similar to Theorem 2.1, thus, for brevity, we omit it.

When the standard Fourier pseudo-spectral method is employed to the system (1.1) for spatial discretizations, we can obtain semi-discrete Hamiltonian energy as

We note that however, the quadratic energy (3.4) is only equivalent to the Hamiltonian energy (3.5) in the continuous sense, but not for the discrete sense.

We first apply the extrapolation technique to the nonlinear term of (3.3) and a linearized system is obtained, as follows:

By using the Lawson transformation [39], we multiply both sides of the first equation of (3.6) by the operator exp(iLht), and then introduce Ψ=exp(−iLht)ϕ to transform (3.6) into an equivalent form

with the consistent initial condition

We first apply an RK method to the linearized system (3.7), and then the discretization is rewritten in terms of the original variables to give a class of linearly implicit exponential integrations (LI-EIs) for solving (1.1)

According to the definition of matrix-valued function [31], it holds

We consider a Hamiltonian PDEs system given by

with a Hamiltonian energy

is a skew-adjoint operation and

A is a self-adjoint operation and ∫ΩF(z(x,t))dx is bounded from below. By introducing a scalar auxiliary variable

where C0 is a constant large enough to make p well-defined for all z(x,t), x∈Ω. On the basis of the energy-variational principle, the system (3.11) can be reformulated into

which preserves the following quadratic energy

The proposed linearly implicit schemes can be easily generalized to solve the above system.

If the coefficients of (3.7) satisfy

the proposed scheme (3.9)-(3.10) can preserve the discrete quadratic energy, as follows:

We then can deduce from the first equality of (3.9) that

Thus, we can obtain

Besides its energy-preserving property, a most remarkable thing about the above scheme (3.9)-(3.10) is that it can be solved efficiently. For simplicity, we take s=2 as an example.

Multiply both sides of (3.2) and (3.2) with Lh and we then take discrete inner product with γ∗1 and γ∗2, respectively, to obtain