We study full Bayesian procedures for high-dimensional linear regression. We adopt data-dependent empirical priors introduced in [1]. In their paper, these priors have nice posterior contraction properties and are easy to compute. Our paper extend their theoretical results to the case of unknown error variance . Under proper sparsity assumption, we achieve model selection consistency, posterior contraction rates as well as Bernstein von-Mises theorem by analyzing multivariate t-distribution. 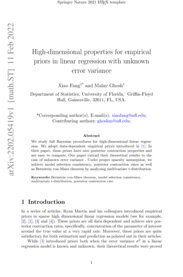 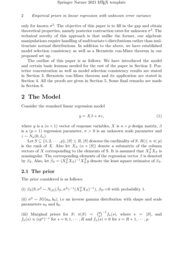 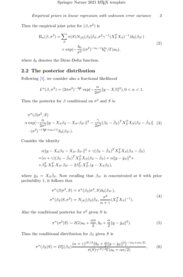 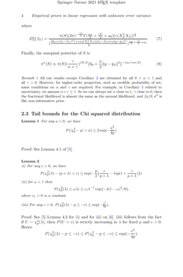 Method of Contraction-Expansion (MOCE) for Simultaneous Inference in Linear Models

A framework for posterior consistency in model selection

We develop a theoretical framework for the frequentist assessment of Bay...
David Rossell, et al. ∙

). These priors are all data dependent and achieve nice posterior contraction rates, specifically, concentration of the parameter of interest around the true value at a very rapid rate. Moreover, these priors are quite satisfactory for both estimation and prediction as pointed out in their articles.

While (Martin:2017, ) introduced priors both when the error variance σ2 in a linear regression model is known and unknown, their theoretical results were proved only for known σ2. The objective of this paper is to fill in the gap and obtain theoretical properties, namely posterior contraction rates for unknown σ2

. The technical novelty of this approach is that unlike the former, our algebraic manipulations require handling of multivariate t-distributions rather than multivariate normal distributions. In addition to the above, we have established model selection consistency as well as a Bernstein von-Mises theorem in our proposed set up.

The outline of this paper is as follows. We have introduced the model and certain basic lemmas needed for the rest of the paper in Section 2. Posterior concentration as well as model selection consistency results are stated in Section 3. Bernstein von-Mises theorem and its application are stated in Section 4. All the proofs are given in Section 5. Some final remarks are made in Section 6.

where y is a (n×1)vector of response variables, X is n×p design matrix, β is a (p×1) regression parameter, σ>0 is an unknown scale parameter and z∼Nn(0,In).

Let S⊆{1,2,⋯,p}, |S|≤R, |S| denotes the cardinality of S. R(≤n≪p) is the rank of X. Also let XS (n×|S|) denote a submatrix of the column vectors of X corresponding to the elements of S. It is assumed that XTSXS is nonsingular. The corresponding elements of the regression vector β is denoted by βS. Also, let ^βS=(XTSXS)−1XTSy denote the least square estimator of βS.

, i.e an inverse gamma distribution with shape and scale parameters

where δ0 denotes the Dirac-Delta function.

Then the posterior for β conditional on σ2 and S is

Also the conditional posterior for σ2 given S is

Thus the conditional distribution for βS given S is

Finally, the marginal posterior of S is

All our results except Corollary 2 are obtained for all 0<α<1 and all γ>0. However, for higher-order properties, such as credible probability of set, some conditions on α and γ are required. For example, in Corollary 2 related to uncertainty, we assume α+γ≤1. So we can always set α close to 1, γ close to 0, then the fractional likelihood is almost the same as the normal likelihood, and βS|S,σ2 is like non-informative prior.

Assume the true model is

and let Dn=∑S∫RpDnS(dβS)δ0Sc(dβSc). Then recalling the pdf of a multivariate t distribution, we have

The following theorem implies that the posterior distribution is actually concentrated on a space of dimension close to s⋆.

To get posterior concentration results, we first establish model selection result. The following theorem demonstrates that asymptotically our empirical Bayesian posterior will not include any unnecessary variables.

Let s⋆≤R, and assume conditions (A1)-(A3) to hold. Also, let the constant a in the marginal prior of S satisfy pa≫s⋆. Then Eβ⋆{Πn(β:Sβ⊃S⋆)}→0, uniformly in β⋆.

To get model selection consistency, it remains to show our empirical Bayesian posterior will asymptotically not miss any true variables.

Intuitively, we are not able to distinguish between 0 and a very small non-zero. Hence, in Theorem 3 we define a cutoff ρn, which is similar to Theorem 5 in(Martin:2017, ) and Theorem 5 in (Castillo:2015, ).

(Selection consistency)Assume that the conditions of Theorem 3 hold. Then Eβ⋆{Πn(β:Sβ=S⋆)}→1.

Proof: Follows immediately from Theorems 2 and 3.

Assume conditions (A1)-(A3) hold, then there exist constant M,G2>0 such that

By adding some conditions on X, we are able to seperate β from Xβ so we can get posterior consistency result for β.

where δn is a positive sequence of constants to be specified.

There exists a constant M such that

uniformly in β⋆ as n→∞, where

where k1,k2 are positive constant, then we get posterior consistency for the coefficient β under l2 norm .

In this section, we show that the posterior distribution of β is asymptotically normal and this property leads to many interesting results.

uniformly in β⋆ as n→∞, where δ0S⋆c denotes the point mass distribution for βS⋆c concentrated at the origin.

Consider a pair (~X,~y) where ~X∈Rd×p is a given matrix of explanatory variable values at which we want to predict the corresponding response ~y∈Rd. Let fn~X(~y|S)

be the conditional posterior predictive distribution of

~y, given S. fn~X(~y|S) is a t-distribution, with 2a+αndegree of freedom, location ~XS^βS, and the scale matrix

Then the predictive distribution of ~y is

For this predictive distribution, we have similar Bernstein von-Mises Theorem as Theorem 6. The proof is similar.

by Lemma 1 we have

Using the mgf of a chi-squared distribution,

From the expression of fn(s), we get

with Δn=Cs⋆, uniformly in β⋆ as n→∞. Proof of Theorem 2: Since