We consider in this paper the problem of sampling a high-dimensional probability distribution π having a density with respect to the Lebesgue measure on R^d, known up to a normalisation factor e^-U(x)/∫_R^de^-U(y)d y. Such problem naturally occurs for example in Bayesian inference and machine learning. Under the assumption that U is continuously differentiable, ∇ U is globally Lipschitz and U is strongly convex, we obtain non-asymptotic bounds for the convergence to stationarity in Wasserstein distance of order 2 and total variation distance of the sampling method based on the Euler discretization of the Langevin stochastic differential equation, for both constant and decreasing step sizes. The dependence on the dimension of the state space of the obtained bounds is studied to demonstrate the applicability of this method. The convergence of an appropriately weighted empirical measure is also investigated and bounds for the mean square error and exponential deviation inequality are reported for functions which are either Lipchitz continuous or measurable and bounded. An illustration to a Bayesian inference for binary regression is presented. 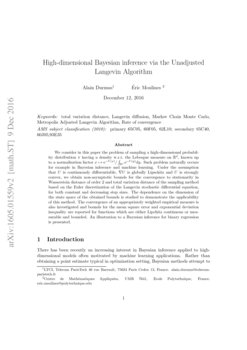 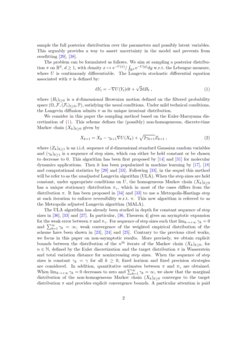 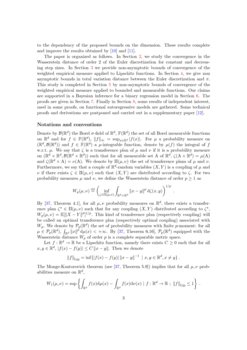 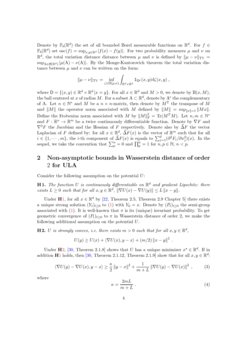 There has been recently an increasing interest in Bayesian inference applied to high-dimensional models often motivated by machine learning applications. Rather than obtaining a point estimate, Bayesian methods attempt to sample the full posterior distribution over the parameters and possibly latent variables which provides a way to assert uncertainty in the model and prevents from overfitting

The problem can be formulated as follows. We aim at sampling a posterior distribution π on Rd, d≥1, with density x↦e−U(x)/∫Rde−U(y)dy w.r.t. the Lebesgue measure, where U is continuously differentiable. The Langevin stochastic differential equation associated with π is defined by:

where (Bt)t≥0 is a d-dimensional Brownian motion defined on the filtered probability space (Ω,F,(Ft)t≥0,P), satisfying the usual conditions. Under mild technical conditions, the Langevin diffusion admits π as its unique invariant distribution.

We study the sampling method based on the Euler-Maruyama discretization of (1). This scheme defines the (possibly) non-homogeneous, discrete-time Markov chain (Xk)k≥0 given by

(γk)k≥1 is a sequence of step sizes, which can either be held constant or be chosen to decrease to 0. This algorithm has been first proposed by [ermak:1975] and [parisi:1981] for molecular dynamics applications. Then it has been popularized in machine learning by [grenander:1983], [grenander:miller:1994] and computational statistics by [neal:1992] and [roberts:tweedie:1996]. Following [roberts:tweedie:1996], in the sequel this method will be refer to as the unadjusted Langevin algorithm (ULA). When the step sizes are held constant, under appropriate conditions on U, the homogeneous Markov chain (Xk)k≥0 has a unique stationary distribution πγ, which in most of the cases differs from the distribution π. It has been proposed in [rossky:doll:friedman:1978] and [roberts:tweedie:1996] to use a Metropolis-Hastings step at each iteration to enforce reversibility w.r.t. π. This algorithm is referred to as the Metropolis adjusted Langevin algorithm (MALA).

The ULA algorithm has already been studied in depth for constant step sizes in [talay:tubaro:1991], [roberts:tweedie:1996] and [mattingly:stuart:higham:2002]. In particular, [talay:tubaro:1991, Theorem 4] gives an asymptotic expansion for the weak error between π and πγ. For sequence of step sizes such that limk→+∞γk=0 and ∑∞k=1γk=∞, weak convergence of the weighted empirical distribution of the ULA algorithm has been established in [lamberton:pages:2002], [lamberton:pages:2003] and [lemaire:2005].

Contrary to these previously reported works, we focus in this paper on non-asymptotic results. More precisely, we obtain explicit bounds between the distribution of the n-th iterate of the Markov chain defined in (2) and the target distribution π in Wasserstein and total variation distance for nonincreasing step sizes. When the sequence of step sizes is held constant γk=γ for all k≥0, both fixed horizon (the total computational budget is fixed and the step size is chosen to minimize the upper bound on the Wasserstein or total variation distance) and fixed precision (for a fixed target precision, the number of iterations and the step size are optimized simultaneously to meet this constraint) strategies are studied. In addition, quantitative estimates between π and πγ are obtained. When limk→+∞γk=0 and ∑∞k=1γk=∞, we show that the marginal distribution of the non-homogeneous Markov chain (Xk)k≥0 converges to the target distribution π and provide explicit convergence bounds. A special attention is paid to the dependency of the proposed upper bounds on the dimension of the state space, since we are particularly interested in the application of these methods to sampling in high-dimension.

Compared to [dalalyan:2014] and [durmus:moulines:2016], our contribution is twofold. First, we report sharper convergence bounds for constant and non-increasing step sizes. In particular, it is shown that the number of iterations required to reach the target distribution π with a precision ϵ>0 in total variation is upper bounded (up to logarithmic factors) by (ϵd)−1, where d is the dimension, under appropriate regularity assumption (in [durmus:moulines:2016], the upper bound was shown to be d−1ϵ−2). We show that our result is optimal (up to logarithmic factors again) in the case of the standard d

-dimensional Gaussian distribution, for which explicit computation can be done. Besides, we establish computable bound for the mean square error associated with ULA for measurable bounded functions, which is an important result in Bayesian statistics to estimate credibility regions. For that purpose, we study the convergence of the Euler-Maruyama discretization towards its stationary distribution in total variation using a discrete time version of reflection coupling introduced in

The paper is organized as follows. In Section 2, we study the convergence in the Wasserstein distance of order 2 of the Euler discretization for constant and decreasing step sizes. In Section 3, we give non asymptotic bounds in total variation distance between the Euler discretization and π. This study is completed in Section 4 by non-asymptotic bounds of convergence of the weighted empirical measure applied to bounded and measurable functions. Our claims are supported in a Bayesian inference for a binary regression model in Section 5. The proofs are given in Section 6. Finally in Section 8

, some results of independent interest, used in the proofs, on functional autoregressive models are gathered. Some technical proofs and derivations are postponed and carried out in a supplementary paper

Denote by B(Rd) the Borel σ-field of Rd, F(Rd) the set of all Borel measurable functions on Rd and for f∈F(Rd), ∥f∥∞=supx∈Rd|f(x)|. For μ a probability measure on (Rd,B(Rd)) and f∈F(Rd) a μ-integrable function, denote by μ(f) the integral of f w.r.t. μ. We say that ζ is a transference plan of μ and ν if it is a probability measure on (Rd×Rd,B(Rd×Rd)) such that for all measurable set A of Rd, ζ(A×Rd)=μ(A) and ζ(Rd×A)=ν(A). We denote by Π(μ,ν) the set of transference plans of μ and ν. Furthermore, we say that a couple of Rd-random variables (X,Y) is a coupling of μ and ν if there exists ζ∈Π(μ,ν) such that (X,Y) are distributed according to ζ. For two probability measures μ and ν, we define the Wasserstein distance of order p≥1 as

Let f:Rd→R be a Lipschitz function, namely there exists C≥0 such that for all x,y∈Rd, |f(x)−f(y)|≤C∥x−y∥. Then we denote

The Monge-Kantorovich theorem (see [VillaniTransport, Theorem 5.9]) implies that for all μ,ν probabilities measure on Rd,

where D={(x,y)∈Rd×Rd|x=y}. For all x∈Rd and M>0, we denote by B(x,M), the ball centered at x of radius M. For a subset A⊂Rd, denote by Ac the complementary of A. Let n∈N∗ and M be a n×n-matrix, then denote by MT the transpose of M and ∥M∥ the operator norm associated with M defined by ∥M∥=sup∥x∥=1∥Mx∥. Define the Frobenius norm associated with M by ∥M∥2F=Tr(MTM). Let n,m∈N∗ and F:Rn→Rm be a twice continuously differentiable function. Denote by ∇F and ∇2F the Jacobian and the Hessian of F respectively. Denote also by →ΔF

the vector Laplacian of

Consider the following assumption on the potential U:

The function U is continuously differentiable on Rd and gradient Lipschitz: there exists L≥0 such that for all x,y∈Rd, ∥∇U(x)−∇U(y)∥≤L∥x−y∥.

Under H 1, for all x∈Rd by [karatzas:shreve:1991, Theorem 2.5, Theorem 2.9 Chapter 5] there exists a unique strong solution (Yt)t≥0 to (1) with Y0=x. Denote by (Pt)t≥0 the semi-group associated with (1). It is well-known that π is its (unique) invariant probability. To get geometric convergence of (Pt)t≥0 to π in Wasserstein distance of order 2, we make the following additional assumption on the potential U.

U is strongly convex, i.e. there exists m>0 such that for all x,y∈Rd,

We briefly summarize some background material on the stability and the convergence in W2 of the overdamped Langevin diffusion under H 1 and H 2. Most of the statements in Section 2 are known and are recalled here for ease of references; see e.g. [chen:shao:1989].

The proof is given in the supplementary document [durmus:moulines:2015:supplement, LABEL:proof:theo:convergence-WZ-strongly-convex]. ∎

Note that the convergence rate in Section 2-4 is independent from the dimension. Let (γk)k≥1 be a sequence of positive and non-increasing step sizes and for n,ℓ∈N, denote by

For γ>0, consider the Markov kernel Rγ given for all A∈B(Rd) and x∈Rd by

The process (Xk)k≥0 given in (2) is an inhomogeneous Markov chain with respect to the family of Markov kernels (Rγk)k≥1. For ℓ,n∈N∗, ℓ≥n, define

The proof follows from Section 2-1 using

. To do so, we construct a coupling between the diffusion and the linear interpolation of the Euler discretization. An obvious candidate is the synchronous coupling

with Y0 is distributed according to ν0, ¯Y0=x and (Γn)n≥1 is given in (5). Therefore since for all n≥0, W22(δxQnγ,ν0PΓn)≤E[∥YΓn−¯YΓn∥2], taking ν0=π, we derive an explicit bound on the Wasserstein distance between the sequence of distributions (δxQkγ)k≥0 and the stationary measure π of the Langevin diffusion (1).

We preface the proof by a technical lemma which is established in the supplementary document LABEL:sec:proof-lem_rec_2.

In the case of constant step sizes γk=γ for all k≥1, we can deduce from Theorem 1, a bound between π and the stationary distribution πγ of Rγ.

We can improve the bound provided by Theorem 1 under additional regularity assumptions on the potential U.

The potential U is three times continuously differentiable and there exists ~L such that for all x,y∈Rd, ∥∥∇2U(x)−∇2U(y)∥∥≤~L∥x−y∥.

The proof of is along the same lines than Theorem 1, using Section 6.2 in place of Section 6.1. ∎

In the case of constant step sizes γk=γ for all k≥1, we can deduce from Theorem 2, a sharper bound between π and the stationary distribution πγ of Rγ.

The proof follows the same line as the proof of Section 2 and is omitted. ∎

Using Section 2-2 and Section 2 or Section 2, given ε>0, we determine the smallest number of iterations nε and an associated step-size γε satisfying W2(δx⋆Rnγε,π)≤ε for all n≥nε. The dependencies on the dimension d and the precision ε of nε based on Theorem 1 and Theorem 2 are reported in Table 1. Under H 1 and H 2, the complexity we get is the same as the one established in [durmus:moulines:2016] for the total variation distance. However if in addition H 3 holds, we improve this complexity with respect to the precision parameter ε as well. Finally, in the case where ~L=0 (for example for non-degenerate d-dimensional Gaussian distributions), then the dependency on the dimension of the number of iterations nε given by Theorem 2 turns out to be only of order O(d1/2log(d)).

In a recent work [dalalyan:2017] (based on a previous version of this paper), an improvement of the proof of Theorem 1 has been proposed for constant step size. Whereas the constants are sharper, the dependence with respect to the dimension and the precision parameter ε>0 is the same (first line of Table 1).

We deal in this section with quantitative bounds in total variation distance. For Bayesian inference application, total variation bounds are of importance for computing highest posterior density (HPD) credible regions and intervals. For computing such bounds we will use the results of Section 2 combined with the regularizing property of the semigroup (Pt)t≥0. Under H 2, define χm for all t≥0 by

The first key result consists in upper-bounding the total variation distance ∥μPt−νPt∥TV for μ,ν∈P1(Rd). To that purpose, we use the coupling by reflection; see [lindvall:rogers:1986] and [chen:shao:1989, Example 3.7]. This coupling is defined as the unique solution (Xt,Yt)t≥0 of the SDE: