After introducing the definitions of positive, negative and companion rules, from a given pair of companion rules we construct a new rule with higher degree of precision The scheme is generalized giving rise to a transformation which we call the mean rule. We show that the mean rule is the best approximation, in the sense of least-squares, obtained from a linear combination of two rules of the same degree of precision. Finally, we show that a rule of degree 2k+1 can be constructed as linear combination of k+1 rules of degree one and rational pseudorandom nodes. Several worked examples are presented. 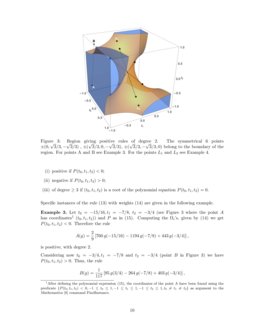 Given two quadrature rules A(g) and B(g) with the same degree of precision m≥0, we begin by proposing a scheme to construct a new rule Y(g) of higher degree. One desirable assumption is that the rules A(g) and B(g) are companion, in the sense that one can assign opposite signals to the respective error. In particular, we show that the basic quadrature rules known as midpoint, trapezoidal, and Simpson rules can all be obtained as linear combinations of companion rules of lower degree of precision. The theoretical background applied in this work relies on the method of undetermined coefficients ([2], p. 565), ([4] p. 170).

We generalize the referred scheme by presenting a rule transformation W(g) (defined in the set Q of rules of degree m), which to a pair of rules (A(g),B(g)) of Q, assigns a new rule of greater degree. This leads to an algorithm to obtain quadrature rules of arbitrary order of precision, as suggested in the worked examples. The rule W(g) is called the mean rule since it is a weighted mean of A(g) and B(g). It can be seen as a least-squares best approximation as discussed in paragraph 4.1.

The main results of this paper are discussed in Section 5. We first show that if one takes a set of k+1 of open rules of degree one, Q0(g),…,Qk(g), whose first member is the midpoint rule Q0(g)=2g(0) and the other members have two symmetrical rational nodes, there exists a unique linear combination of the rules such that the combined rule Wk(g) has degree 2k+1 (see Proposition 3). As an illustration we apply the composite version of the rule W5(g) to obtain approximations of π with 60 significant digits (Example 8) using the model function g(t)=2/(1+t2),\-1≤t≤1.

Finally we show that one can expand the scheme considering combined rules where the nodes of the 1-degree starting rules are pseudorandom rational numbers (paragraph 5.1). In particular, we use a pseudorandom 151-degree combined rule giving an approximation of π with more than 500 significant digits as detailed in Example 9.

A quadrature rule Q(f) is an approximation of the integral ∫baf(x)dx obtained using values of f (and/or its derivatives) on a discrete set of points in [a,b] (see for instance [3]).

Without loss of generality, we consider [−1,1] to be the interval of integration and we will denote by Q(g) a general quadrature rule to approximate the integral I(g)=∫1−1g(t)dt.

Note that a rule Q(g), defined in [−1,1], can be rewritten for the interval [a,b] as Q(f), through a change of variable defined by the bijection

In what follows, μm+1

(a.k.a. the principal moment) plays a key role and we shorten its notation to

Let Qm(f) be a quadrature rule of degree m(m≥0), such that

A pair of rules of the same degree whose respective value γ have opposite signs are rules of particular interest. Such rules will be called companion rules.

Two rules A(g) and B(g), of the same degree m, such that γA and γB have opposite signs are called companion rules.

We now address the problem of combining a pair of companion rules and show that the resulting rule is not only a weighted mean of the two rules considered but also it has higher degree of precision. An obvious advantage of this approach is that at a minor computational cost, the value of the new rule can be closer to the integral than the values of the rules of the starting pair (see Example 2).

and consider the linear combination of the rules

If A(g) and B(g) are companion rules of degree m≥0, such that

So, the rule Y(g) has degree at least m. It remains to show that this rule is exact for ϕm+1(t) which implies that its degree is at least m+1. From (2), we have

We assume that A(g) is positive and B(g) is negative being the proof in the other case completely analogous. By definition of sign of a rule, we have μ>μA and μ<μB, i.e.

The well-konown midpoint and trapezoidal rules are, respectively,

For ϕ2(t)=t2, the principal moment is

Let us show that the linear combination (3) of these two rules of degree 1 coincides with the Simpson rule, which is a rule of degree m=3.

which coincides with Simpson rule S(g) (see next example).

(A combined rule of degree 5 using the Simpson rule )

and the Simpson rule (closed)

are both of degree 3. Let us show that they are companion rules, and verify that the respective combined rule (3) has degree m=5.

The explicit expression of the weighted mean (6) is

The rule Y(g) has degree m=5 since

The result in (7) shows the dependence of Y(g) on 5 nodes. In paragraph 3.2 we will construct another rule of degree 5 using only 3 nodes.

In computational terms, given two rules A(g) and B(g) one does not need to use the expression of the rule Y(g) in terms of the nodes like in (7) but just the linear combination (6).

In order to observe the numerical improvement one can get passing from a pair of companion rules to the respective combined rule Y(g), let us approximate the following integral which will be used as a test model in the subsequent examples:

while EY(g)=I(g)−Y(g)≃0.008. Once computed A(g) and S(g) the cost for computing Y(g) is only an addition, two multiplications and a division. In this example an ≃5% relative error in A(g) and S(g) yields to a relative error of ≃0.3% of the rule Y(g), meaning that the combined rule is approximately 15 times more accurate than the two referred companion rules.

Let t0,t1 be two distinct nodes belonging to [−1,1], and the two-point quadrature rule

where the parameters A0, A1 will be determined in order that the rule has a degree of precision at least 1.

In Figure 1 the points in the square region D for which the rule Q(g) is either positive or negative are displayed in gray and white respectively. The boundary of this region contains points of the hyperbole L2 in (9). For (t0,t1) belonging to the hyperbole L2 the rule Q(g) has exactly degree one, meaning that there is an infinite number of rules of 1-degree each one with nodes t0,t1 for which the point (t0,t1) belongs to one of the two branches of the hyperbole L2 in Figure 1. Moreover, one immediately sees that the two-point closed Newton-Cotes rule (t0=−1 and t1=1) is a negative rule of order one, as it was assumed in Example 1. It is also worth to recall that any closed Newton-Cotes rule of any degree m>1 is negative as well, whereas the open Newton-Cotes rules are all positive.

The mathematical aspects behind the facts (i)-(iv) above and the geometry of figures 1-2 can be explained as follows.

Instead of the canonical polynomial basis of monomials of degree ≤3, we consider the basis

Imposing the condition that the rule Q(f) is of degree at least 1, the parameters A0,A1 in (8) are computed. That is, considering Q(Ψ0)=I(Ψ0) and Q(Ψ1)=I(Ψ1), we obtain the following triangular system in the unknowns A0,A1:

has degree at least one.

Thus, the rule is of degree one and positive for the points (t0,t1) displayed in gray color in Figure 1 and negative for the white points.

One advantage of the polynomial basis Ψ0(t),Ψ1(t),… is that from the nodal polynomial onwards the rule is null and so the value of the parameter γQ coincides with μ=I(Ψ3). This is the reason why we call μ the principal moment of the rule which also gives the sign of a rule in the sense of Definition 2.2.

The rule Q(g) has degree ≥3 if and only if (9) holds and it has null moment μ=∫1−1Ψ3(t)dt. The rule has degree 2 and is positive when μ>0 and negative otherwise. The condition μ=0 is given by the equation

In Figure 2, the points for which μ>0 (positive rule of degree 2) are displayed in dark gray and in light gray the points with μ<0 (negative rule). The boundary of the respective domains is shown in dark bold. This boundary is the algebraic curve L3 defined by a cubic polynomial as in (11).

This fully justify the facts (i)-(iv). Analogous procedures enable us to obtain the geometry of a family of rules with three distinct nodes. Indeed, following the same lines as above, we will obtain a famous (positive) rule of degree 5, known as Gauss-Legendre rule (see for instance [1], Ch. 6) with three nodes, which might be be combined with the 5 degree rule Y(g) given in Example 2.

Firstly, we obtain the weights A0,A1,A2 in order that all the rules in the set have degree 2 and are either positive or negative. This will enable us to find candidates to pairs of companion rules of degree 2.

The weights Ai can be written as functions Ai=Ωi:D⊂R3↦R, for i=0,1,2. In fact, taking the polynomials

the rule has degree ≥2 if and only if it is exact for Ψ0,Ψ1 and Ψ2. That is, the weights are solution to the triangular system

Since we are assuming t0≠t1≠t2, this system has a unique solution,

where Ωi are given by (12). After some simplifications the expressions in (12) become

Now, let us consider the polynomials

By construction, the rule Q(g) has order ≥2

. Therefore, for any polynomial of the vector space

P2 (polynomials of degree ≤2) the rule is exact. In particular, it is exact for the elements of the canonical basis of P2, that is for ϕj(t)=tj, with 0≤j≤2.

Let P be the following polynomial

Specific instances of the rule (13) with weights (14) are given in the following example.

is positive, with degree 2.

is negative, with degree 2. Taking ϕ3(t)=t3, the coefficients (3) of the combined rule are:

As A(g) and B(g) have errors of opposite sign they are companion rules (see Definition 2.3). The combined rule is

which coincides with the (open) 4-point rule

Thus the combined rule Y(g) is negative and of degree m=3.

As an exercise, the interested reader can verify that for any of the 6 points referred in Figure 3 the corresponding rule Q(g) in (13) has degree 3. Thus, one may conclude that there exists an infinite set of rules of the referred type which are negative and of degree 3. Consequently, as all rules belonging to the set of open Newton-Cotes rules, NC, are positive, so they are good candidates to use in pairs of companion rules in order to obtain combined rules of arbitrary order.

In what follows, Q denotes the set of rules with degree m≥0. In Proposition 1, a new rule has been assigned to a pair of companion rules belonging to Q. In order to generalize this scheme, let us define a transformation

where W(g) will enjoy analogous properties of the linear combination Y(g) in (3), in the sense that the rule W(g) has degree greater than those of the arguments A(g) and B(g). The rule W(g) will be called mean rule.

As before, for a given rule Q(g)∈Q, we compute the quantities μ and μQ, defined by

When μB−μA≠0, let us show that there exists a unique pair (α,β) such that

Since μA≠μB this system has the unique solution

We now construct the mean rule of (10) and the Simpson’s rule (both rules of degree 3) and show that the mean rule has degree 5. The starting rules will be denoted by A(g) and S(g), respectively: