Hierarchical structure and the prediction of missing links in networks

Networks have in recent years emerged as an invaluable tool for describing and quantifying complex systems in many branches of science. Recent studies suggest that networks often exhibit hierarchical organization, where vertices divide into groups that further subdivide into groups of groups, and so forth over multiple scales. In many cases these groups are found to correspond to known functional units, such as ecological niches in food webs, modules in biochemical networks (protein interaction networks, metabolic networks, or genetic regulatory networks), or communities in social networks. Here we present a general technique for inferring hierarchical structure from network data and demonstrate that the existence of hierarchy can simultaneously explain and quantitatively reproduce many commonly observed topological properties of networks, such as right-skewed degree distributions, high clustering coefficients, and short path lengths. We further show that knowledge of hierarchical structure can be used to predict missing connections in partially known networks with high accuracy, and for more general network structures than competing techniques. Taken together, our results suggest that hierarchy is a central organizing principle of complex networks, capable of offering insight into many network phenomena. 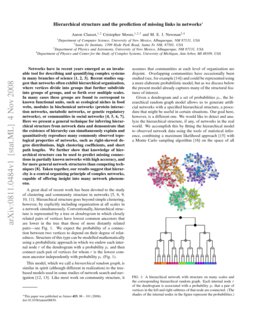 Our model for the hierarchical organization of a network is as follows.222Computer code implementing many of the analysis methods described in this paper can be found online at www.santafe.edu/∼aaronc/randomgraphs/.
Let G be a graph with n vertices. A dendrogram D is a binary tree with n leaves corresponding to the vertices of G. Each of the n−1 internal nodes of D corresponds to the group of vertices that are descended from it. We associate a probability pr with each internal node r. Then, given two vertices i,j of G, the probability pij that they are connected by an edge is pij=pr where r is their lowest common ancestor in D. The combination (D,{pr}) of the dendrogram and the set of probabilities then defines a hierarchical random graph.

Note that if a community has, say, three subcommunities, with an equal probability p of connections between them, we can represent this in our model by first splitting one of these subcommunities off, and then splitting the other two. The two internal nodes corresponding to these splits would be given the same probabilities pr=p. This yields three possible binary dendrograms, which are all considered equally likely.

We can think of the hierarchical random graph as a variation on the classical Erdős–Rényi random graph G(n,p). As in that model, the presence or absence of an edge between any pair of vertices is independent of the presence or absence of any other edge. However, whereas in G(n,p) every pair of vertices has the same probability p of being connected, in the hierarchical random graph the probabilities are inhomogeneous, with the inhomogeneities controlled by the topological structure of the dendrogram D and the parameters {pr}. Many other models with inhomogeneous edge probabilities have, of course, been studied in the past. One example is a structured random graph in which there are a finite number of types of vertices with a matrix pkl giving the connection probabilities between them.333F. McSherry, “Spectral Partitioning of Random Graphs.” Proc. Foundations of Computer Science (FOCS), pp. 529–537 (2001)

Appendix B Fitting the hierarchical random graph to data

is the correct explanation of the data is, by Bayes’ theorem, proportional to the posterior probability or

likelihood L with which that model generates the observed network.444G. Casella and R. L. Berger, “Statistical Inference.” Duxbury Press, Belmont (2001). Our goal is to maximize L or, more generally, to sample the space of all models with probability proportional to L.

Let Er be the number of edges in G whose endpoints have r as their lowest common ancestor in D, and let Lr and Rr, respectively, be the numbers of leaves in the left and right subtrees rooted at r. Then the likelihood of the hierarchical random graph is

with the convention that 00=1.

If we fix the dendrogram D, it is easy to find the probabilities {¯¯¯pr} that maximize L(D,{pr}). For each r, they are given by

the fraction of potential edges between the two subtrees of r that actually appear in the graph G. The likelihood of the dendrogram evaluated at this maximum is then

Figure S1 shows an illustrative example, consisting of a network with six vertices.

It is often convenient to work with the logarithm of the likelihood,

where h(p)=−plogp−(1−p)log(1−p) is the Gibbs-Shannon entropy function. Note that each term −LrRrh(¯¯¯pr) is maximized when ¯¯¯pr is close to 0 or to 1, i.e., when the entropy is minimized. In other words, high-likelihood dendrograms are those that partition the vertices into groups between which connections are either very common or very rare.

D with probability proportional to their likelihood L(D). To create the Markov chain we need to pick a set of transitions between possible dendrograms. The transitions we use consist of rearrangements of subtrees of the dendrogram as follows. First, note that each internal node r of a dendrogram D is associated with three subtrees: the subtrees s,t descended from its two daughters, and the subtree u descended from its sibling. As Figure S2 shows, there are two ways we can reorder these subtrees without disturbing any of their internal relationships. Each step of our Markov chain consists first of choosing an internal node r uniformly at random (other than the root) and then choosing uniformly at random between the two alternate configurations of the subtrees associated with that node and adopting that configuration. The result is a new dendrogram D′. It is straightforward to show that transitions of this type are ergodic, i.e., that any pair of finite dendrograms can be connected by a finite series of such transitions.

Once we have generated our new dendrogram D′ we accept or reject that dendrogram according to the standard Metropolis–Hastings rule.555M. E. J. Newman and G. T. Barkema, “Monte Carlo Methods in Statistical Physics.” Clarendon Press, Oxford (1999). Specifically, we accept the transition D→D′ if ΔlogL=logL(D′)−logL(D) is nonnegative, so that D′ is at least as likely as D; otherwise we accept the transition with probability exp(logΔL)=L(D′)/L(D)

. If the transition is not accepted, the dendrogram remains the same on this step of the chain. The Metropolis-Hastings rule ensures detailed balance and, in combination with the ergodicity of the transitions, guarantees a limiting probability distribution over dendrograms that is proportional to the likelihood,

P(D)∝L(D). The quantity ΔlogL can be calculated easily, since the only terms in Eq. (4) that change from D to D′ are those involving the subtrees s, t, and u associated with the chosen node.

The Markov chain appears to converge relatively quickly, with the likelihood reaching a plateau after roughly O(n2) steps. This is not a rigorous performance guarantee, however, and indeed there are mathematical results for similar Markov chains that suggest that equilibration could take exponential time in the worst case.666E. Mossel and E. Vigoda, “Phylogenetic MCMC Are Misleading on Mixtures of Trees.” Science 309, 2207 (2005) Still, as our results here show, the method seems to work quite well in practice. The algorithm is able to handle networks with up to a few thousand vertices in a reasonable amount of computer time.

We find that there are typically many dendrograms with roughly equal likelihoods, which reinforces our contention that it is important to sample the distribution of dendrograms rather than merely focusing on the most likely one.

The procedure for resampling from the hierarchical random graph is as follows.

After generating many samples in this way, we can compute averages of network statistics such as the degree distribution, the clustering coefficient, the vertex-vertex distance distribution, and so forth. Thus, in a way similar to Bayesian model averaging,777T. Hastie, R. Tibshirani and J. Friedman, “The Elements of Statistical Learning.” Springer, New York (2001).

we can estimate the distribution of network statistics defined by the equilibrium ensemble of dendrograms.

For the construction of consensus dendrograms such as the one shown in Fig. 2a, we found it useful to weight the most likely dendrograms more heavily, giving them weight proportional to the square of their likelihood, in order to extract a coherent consensus structure from the equilibrium set of models.

Our algorithm for using hierarchical random graphs to predict missing connections is as follows.

In general, we find that the top 1% of such predictions are highly accurate. However, for large networks, even the top 1% can be an unreasonably large number of candidates to check experimentally. In many contexts, researchers may want to consider using the procedure interactively, i.e., predicting a small number of missing connections, checking them experimentally, adding the results to the network, and running the algorithm again to predict additional connections.

The alternative prediction methods we compared against, which were previously investigated in888D. Liben-Nowell and J. Kleinberg, “The link prediction problem for social networks.” Proc. Internat. Conf. on Info. and Know. Manage. (2003)., consist of giving each pair i,j of vertices a score, sorting pairs in decreasing order of their score, and predicting that those with the highest scores are the most likely to be connected. Several different types of scores were investigated, defined as follows, where Γ(j) is the set of vertices connected to j.

One way to quantify the success of a prediction method, used by previous authors who have studied link prediction problems7, is the ratio between the probability that the top-ranked pair is connected and the probability that a randomly chosen pair of vertices, which do not have an observed connection between them, are connected. Figure S4 shows the average value of this ratio as a function of the percentage of the network shown to the algorithm, for each of our three networks. Even when fully 50% of the network is missing, our method predicts missing connections about ten times better than chance for all three networks. In practical terms, this means that the amount of work required of the experimenter to discover a new connection is reduced by a factor of 10, an enormous improvement by any standard. If a greater fraction of the network is known, the accuracy becomes even greater, rising as high as 200 times better than chance when only a few connections are missing.

We note, however, that using this ratio to judge prediction algorithms has an important disadvantage. Some missing connections are much easier to predict than others: for instance, if a network has a heavy-tailed degree distribution and we remove a randomly chosen subset of the edges, the chances are excellent that two high-degree vertices will have a missing connection and such a connection can be easily predicted by simple heuristics such as those discussed above. The AUC statistic used in the text, by contrast, looks at an algorithm’s overall ability to rank all the missing connections over nonexistent ones, not just those that are easiest to predict.

Finally, we have investigated the performance of each of the prediction algorithms on purely random (i.e., Erdős–Rényi) graphs. As expected, no method performs better than chance in this case, since the connections are completely independent random events and there is no structure to discover. We also tested each algorithm on a graph with a power-law degree distribution generated according to the configuration model.999M. Molloy and B. Reed, “A critical point for random graphs with a given degree sequence.” Random Structures and Algorithms 6, 161–179 (1995) In this case, guessing that high-degree vertices are likely to be connected performs quite well, whereas the method based on the hierarchical random graph performs poorly since these graphs have no hierarchical structure to discover.