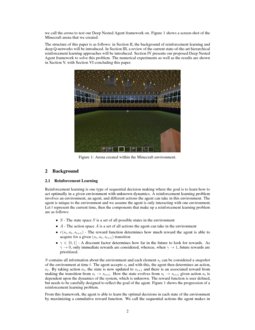 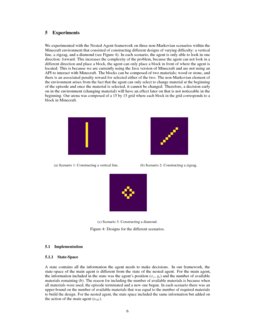 Deep reinforcement learning has recently attracted a large community due to recent successes like Deepmind’s agent AlphaGO (Deepmind, 2017). AlphaGO was able to defeat the world champion Ke Jie in three matches of GO! in May 2017, which shows the capability that deep reinforcement learning has for solving challenging problems. A problem arises, however, in domains where the typical assumptions of reinforcement learning no longer hold. In environments where the Markovian assumption fails, actions taken early on can have long term effects that are unknown until the environment progresses for some time which lead to sub-optimal convergence in these domains. To alleviate this problem, a hierarchical formulation of reinforcement learning can be applied to create an Markovian environment consisting of a top-level and low-level agent (although more complex hierarchies consisting of many low-level agents are also possible).

In this paper we utilize three non-markovian scenarios in Minecraft to demonstrate the efficiency and performance of the Deep Nested Agent framework, when compared to hierarchical reinforcement learning and non-hierarchical single agent reinforcement learning. Minecraft is a popular open-world generated environment that has recently attracted the attention of AI researchers due to the ability to create controlled scenarios. In this environment, we create our own controlled scenarios in what we call the arena to test our Deep Nested Agent framework on. Figure 1 shows a screen-shot of the Minecraft arena that we created.

The structure of this paper is as follows: in Section II, the background of reinforcement learning and deep Q-networks will be introduced. In Section III, a review of the current state-of-the-art hierarchical reinforcement learning approaches will be introduced. Section IV presents our proposed Deep Nested Agent framework to solve this problem. The numerical experiments as well as the results are shown in Section V, with Section VI concluding this paper.

S contains all information about the environment and each element st can be considered a snapshot of the environment at time t. The agent accepts st and with this, the agent then determines an action, at. By taking action at, the state is now updated to st+1 and there is an associated reward from making the transition from st→st+1. How the state evolves from st→st+1 given action at is dependent upon the dynamics of the system, which is unknown. The reward function is user defined, but needs to be carefully designed to reflect the goal of the agent. Figure 1 shows the progression of a reinforcement learning problem.

If we define the reward for actions we deem "optimal" very high, then by maximizing the total reward, we have found the optimal solution to the problem.

and the goal is to maximize a cumulative reward by selecting an appropriate action in each state. The idea of Q-learning is to estimate a value

Q for each state and action pair (s,a) in an environment that directly reflects the future reward associated with taking such an action from this state. By doing this, we can extract the policy that reflects the optimal actions for an agent to take. The policy can be thought of as a mapping or a look-up table, where at each state, the policy tells the agent which action is the best one to take. During each learning iteration, the Q-values are updated as follows:

In equation (2), α represents the learning rate, r represents the reward for a given state and action, and γ represents the discount factor. One can see that in the maxat+1Q(st+1,at+1) term, the idea is to determine the best possible future reward by taking this action.

. One of the most widely used function approximation techniques for Q-learning is deep Q-networks (DQN), which involves using a neural network to approximate the Q-values for all the states. With standard Q-learning, the Q-value was a function of

Q(s,a), but with DQN the Q-value is now a function of Q(s,a,θ), where θ is the parameters of the neural network. Given an n-dimensional state-space with an m-dimensional action space, the neural network creates a map Rn→Rm. As mentioned by Van Hasselt et al. (2016), incorporating a target network and experience replay are the two main ingredients for DQN (Mnih et al., 2015). The target network with parameters θ−, is equivalent to the on-line network, but the weights (θ−) are updated every τ time steps. The target used by DQN can then be written as:

The idea of experience replay is that for a certain amount of time, observed transitions are stored and then sampled uniformly to update the network. By incorporating the target network, as well as, experience replay, this can drastically improve the performance of the algorithm (Mnih et al., 2015).

In Q-learning and DQN there is the use of a max operator to select which action results in the largest potential future reward. Van Hasselt et al. (2016) showed that due to this max operation, the network is more likely to overestimate the values, resulting in overoptimistic Q value estimations. The idea introduced by Van Hasselt (2010) was to decouple the max operation to prevent this overestimation to create what is called double deep Q-network (DDQN). To decouple the max operator, a second value function must be introduced, including a second network with weights θ′. During each training iteration, one set of weights determines the greedy policy and the other then determine the Q-value associated. Formulating equation (2) as a DDQN problem:

In equation (3), it can be seen that the max operator has been removed and we are now including an argmaxat+1Q(st+1,at+1;θt) function to determine the best action due to the on-line weights. We then use that action, along with the second set of weights to determine the estimated Q-value.

Learning in complex, hierarchical environments is a challenging task and has attracted a lot of attention in recent publications (Sutton et al., 1999; Precup, 2000; Dayan and Hinton, 1993; Dietterich, 2000; Boutilier et al., 1997; Dayan, 1993; Kaelbling, 1993; Parr and Russell, 1998; Precup et al., 1997; Schmidhuber, 1991; Sutton, 1995; Wiering and Schmidhuber, 1997; Vezhnevets et al., 2016; Bacon et al., 2017; Vezhnevets et al., 2017). One popular method for constructing hierarchical agents is based off of work by (Sutton et al., 1999; Precup, 2000), known as the options framework. In this framework, a low-level agent, known as the option, can be thought of as a sub-policy generated by the top-level agent that operates in an environment until a given termination criteria is met. A top-level agent picks an option, given its own policy, thus creating a hierarchical structure. It was mentioned in work by Vezhnevets et al. (2017) that the options are typically learned using sub-goals and ’pseudo-rewards’ that are explicitly defined (Sutton et al., 1999; Dietterich, 2000; Dayan and Hinton, 1993). In recent publications, it was demonstrated that learning a selection rule among predefined options using deep neural networks (DNN) delivers promising results in challenging, complex environments like Minecraft and Atari (Tessler et al., 2017; Kulkarni et al., 2016; Oh et al., 2017); in addition, other research has shown that it is possible to learn options jointly with a policy-over-options end-to-end (Vezhnevets et al., 2017; Bacon et al., 2017). In the hierarchical formulation by Vezhnevets et al. (2017), their framework used a top-level agent which produces a meaningful and explicit goal for the bottom level to achieve. In this framework, the authors were able to create sub-goals that emerge as directions in the latent space and are naturally diverse, which differs from the options framework.

A key difference between our approach and the aforementioned approaches is that in our proposal the main agent propagates information to the low-level nested agent that becomes included in the state space of the nested agent. This decreases training time in complex environments and leads to significantly better performance (see section 5).

We now introduce the Deep Nested Agent framework, a variant of deep hierarchical reinforcement learning where the information from the top level agent is propagated to the nested agent in the form of state augmentation. In this section we discuss how the Deep Nested Agent algorithm is formulated and provide pseudo-code for the algorithm (see Algorithm 1).

We experimented with the Nested Agent framework on three non-Markovian scenarios within the Minecraft environment that consisted of constructing different designs of varying difficulty: a vertical line, a zigzag, and a diamond (see Figure 4). In each scenario, the agent is only able to look in one direction: forward. This increases the complexity of the problem, because the agent can not look in a different direction and place a block, the agent can only place a block in front of where the agent is located. This is because we are currently using the Java version of Minecraft and are not using an API to interact with Minecraft. The blocks can be composed of two materials; wood or stone, and there is an associated penalty reward for selected either of the two. The non-Markovian element of the environment arises from the fact that the agent can only select to change material at the beginning of the episode and once the material is selected, it cannot be changed. Therefore, a decision early on in the environment (changing material) will have an effect later on that is not noticeable in the beginning. Our arena was composed of a 15 by 15 grid where each block in the grid corresponds to a block in Minecraft.

along with the action-space for the nested agent:

where F is move forward, B backward, L left, R right, and the addition of D means to place a block down.

where I is an indicator function defined as:

All code for the experiments were run in python 3.6 using keras with tensorflow compiled from source. The experiments were run on a Ubuntu workstation with a single 12gb memory 1080x TI GPU with 32gb of RAM. We used the JAVA version of Minecraft, so all code had to be designed to know where to click on the game screen to start, with all actions being programmed as time-interval key strokes. As mentioned in the paper, we ran each model (non-hierarchical single agent, hierarchical agent, and nested agent) for 3,000 episodes and repeated the training for 10 trials to average the results. This led to a more interpretable result instead of reporting one single trial. I can be seen that the models were unable to obtain the optimal solution in scenario 2 and scenario 3. We believe this is due to the number of episodes being set to 3,000 and with more training the deep nested agent model and the deep hierarchical agent model should be able to obtain the optimal solution.

To construct the deep non-hierarchical single agent, we utilized the DDQN concept that was mentioned earlier in the paper. Since the agent did not have any hierarchical properties, the action set of the main agent and nested agent were combined into one action set for the single agent. Because the action of choosing material was time-sensitive, if the single agent did not choose the material first, then the episode would terminate.

We used an experience replay memory length of one-million with no priority, but in the future we will compare our results using prioritized experience replay. Our neural network model was composed of a simple 4-layer network with two hidden layers. Each hidden layer had 32 nodes and we used a batch size of 32 as well. In all of the experiments we used the TanHactivation function in training our neural network. Each agent was trained using the DDQN architecture that was introduced in Section 2 with the addition of the deep nested agent framework. We also used the ϵ−greedy search strategy with ϵ decaying faster for the main agent and ϵ decaying slower for the nested agent. ϵ was linearly decayed from 1.0 → 0.001 in all experiments for the main agent and nested agent.