Hierarchy in reinforcement learning agents allows for control at multiple time scales yielding improved sample efficiency, the ability to deal with long time horizons and transferability of sub-policies to tasks outside the training distribution. It is often implemented as a master policy providing goals to a sub-policy. Ideally, we would like the goal-spaces to be learned, however, properties of optimal goal spaces still remain unknown and consequently there is no method yet to learn optimal goal spaces. Motivated by this, we systematically analyze how various modifications to the ground-truth goal-space affect learning in hierarchical models with the aim of identifying important properties of optimal goal spaces. Our results show that, while rotation of ground-truth goal spaces and noise had no effect, having additional unnecessary factors significantly impaired learning in hierarchical models. 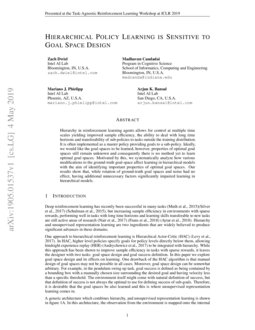 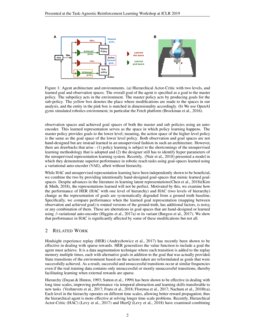 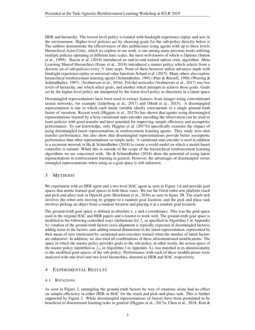 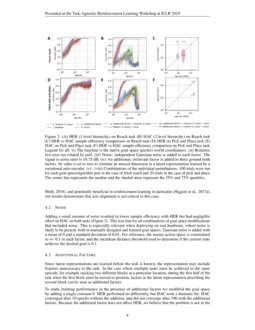 One approach to hierarchical reinforcement learning is Hierarchical Actor-Critic (HAC) (Levy et al., 2017). In HAC, higher level policies specify goals for policy levels directly below them, allowing hindsight experience replay (HER) (Andrychowicz et al., 2017) to be integrated with hierarchy. While this approach has been shown to improve sample efficiency in tasks with sparse rewards, it leaves the designer with two tasks: goal space design and goal success definition. In this paper we explore goal space design and its effects on learning. One drawback of the HAC algorithm is that manual design of goal spaces may not be possible in all cases. Moreover, goal space design can be somewhat arbitrary. For example, in the pendulum swing up task, goal success is defined as being contained by a bounding box with a manually chosen size surrounding the desired goal and having velocity less than a specific threshold. The environment itself might come with natural definition of success, but that definition of success is not always the optimal to use for defining success of sub-goals. Therefore, it is desirable that the goal spaces be also learned and this is where unsupervised representation learning comes in.

A generic architecture which combines hierarchy, and unsupervised representation learning is shown in figure 1

A. In this architecture, the observation from the environment is mapped onto the internal observation spaces and achieved goal spaces of both the master and sub policies using an auto-encoder. This learned representation serves as the space in which policy learning happens. The master policy provides goals to the lower level; meaning, the action space of the higher level policy is the same as the goal space of the lower level policy. Both observation and goal spaces are not hand-designed but are instead learned in an unsupervised fashion in such an architecture. However, there are drawbacks that arise - (1) policy learning is subject to the shortcomings of the unsupervised learning methodology that is adopted and (2) the designer still has to identify hyper parameters of the unsupervised representation learning system. Recently,

While HAC and unsupervised representation learning have been independently shown to be beneficial, we combine the two by providing intentionally hand-designed goal-spaces that mimic learned goal-spaces. Despite advances in the literature in learning latent representations(Chen et al., 2018)(Kim & Mnih, 2018), the representations learned will not be perfect. Motivated by this, we examine how the performance of HER (HAC with one level of hierarchy) and HAC (two levels of hierarchy) change as the representation of goals are systematically degraded from a ground truth baseline. Specifically, we compare performance when the learned goal representation (mapping between observation and achieved goal) is rotated versions of the ground-truth, has additional factors, is noisy, or any combination of them. These are aberrations in goal spaces that are hand-designed or learned using β-variational auto-encoder (Higgins et al., 2017a) or its variant (Burgess et al., 2017). We show that performance in HAC is significantly affected by some of these modifications but not all.

Hindsight experience replay (HER) (Andrychowicz et al., 2017) has recently been shown to be effective in dealing with sparse rewards. HER generalizes the value function to include a goal the agent must achieve. It is a data augmentation technique where each transition is added to the replay memory multiple times, each with alternative goals in addition to the goal that was actually provided. State transitions of the environment based on the actions taken are reformulated as goals that were successfully achieved. As a result, successful and unsuccessful transitions occur at similar frequencies even if the real training data contains only unsuccessful or mostly unsuccessful transitions, thereby facilitating learning when external rewards are sparse.

Hierarchy (Dayan & Hinton, 1993; Sutton et al., 1999) has been shown to be effective in dealing with long time scales, improving performance via temporal abstraction and learning skills transferable to new tasks  (Vezhnevets et al., 2017; Frans et al., 2018; Florensa et al., 2017; Nachum et al., 2018b, a). Each level in the hierarchy operates on different time scales, allowing better reward propagation; thus the hierarchical agent is more effective at solving longer time scale problems. Recently, Hierarchical Actor-Critic (HAC) (Levy et al., 2017) and HierQ (Levy et al., 2018) have examined combining HER and hierarchy. The lowest level policy is trained with hindsight experience replay and acts in the environment. Higher level policies act by choosing goals for the sub-policy directly below it. The authors demonstrate the effectiveness of this architecture using agents with up to three levels. Hierarchical Actor-Critic, which we explore in our work, is one among many previous works utilizing multiple policies operating at different time scales, the most well-known of which is Options (Sutton et al., 1999).  Bacon et al. (2016) introduced an end-to-end trained option critic algorithm. Meta Learning Shared Hierarchies (Frans et al., 2018) introduced a master policy which selects from a discrete set of sub-policies every N time steps. None of these however utilize advances made with hindsight experience replay or universal value functions Schaul et al. (2015). Many others also explore hierarchical reinforcement learning agents (Schmidhuber, 1991) (Parr & Russell, 1998) (Wiering & Schmidhuber, 1997)  (Vezhnevets et al., 2016). FeUdal networks (Vezhnevets et al., 2017) use two levels of hierarchy, one which select goals, and another which attempts to achieve those goals. Goals set by the higher-level policy are interpreted by the lower-level policy as directions in a latent space.

Disentangled representations have been used to extract features from images using convolutional neural networks, for example

(Jaderberg et al., 2017) and (Mnih et al., 2015). A disentangled representation is one in which each latent variable ideally corresponds to a single ground truth factor of variation. Recent work (Higgins et al., 2017b)

has shown that agents using disentangled representations learned by a beta-variational auto-encoder encoding the observation can be used to learn policies with good transfer and have potential for improving sample efficiency and asymptotic performance. To our knowledge, only

We experiment with an HER agent and a two level HAC agent as seen in Figure 1A and provide goal spaces that mimic learned goal spaces in both these cases. We use the Fetch robot arm platform reach and pick-and-place task in OpenAI gym (Brockman et al., 2016) as seen in figure 1B. The reach task involves the robot arm moving its gripper to a random goal location, and the pick and place task involves picking an object from a random location and placing it at a random goal location.

The ground-truth goal space is defined in absolute x, y and z coordinates. This was the goal space used in the original HAC and HER papers and is known to work well. The ground-truth goal space is modified in the following controlled ways (definitions for fs as specified in Algorithm 1 in Appendix A): rotation of the ground truth factors (axis-alignment is typically expected of disentangled factors), adding noise to the factors, and, adding unused dimensions in the latent representation, represented by their mean of zero (motivated by variational auto-encoders trained when the number of latent factors are unknown). In addition, we also tried all combinations of these aforementioned modifications. The space in which the master policy provides goals to the sub-policy, in other words, the action-space of the master policy (identified as fm in Algorithm 1 in Appendix A), was matched in its dimensionality to the modified goal-spaces of the sub-policy. Performance with each of these modifications were analyzed with one-level and two-level hierarchies, denoted as HER and HAC respectively.

As seen in Figure 2, entangling the ground truth factors by way of rotations alone had no effect on sample efficiency in either HER or HAC for the reach and pick-and-place task. This is further supported by Figure 3. While disentangled representations of factors have been postulated to be beneficial to downstream learning tasks in general (Higgins et al., 2017a; Chen et al., 2018; Kim & Mnih, 2018), and potentially beneficial in reinforcement learning in particular (Higgins et al., 2017a), our results demonstrate that axis alignment is not critical in this case.

). This was true for all combinations of goal space modifications that included noise. This is especially relevant when deploying on real hardware, where noise is likely to be present, both in manually designed and learned goal spaces. Gaussian noise is added with a mean of 0 and a standard deviation of 0.01. For reference, the master action space is constrained to +/- 0.1 in each factor, and the euclidean distance threshold used to determine if the current state achieves the desired goal is 0.1.

Since latent representations are learned before the task is known, the representation may include features unnecessary to the task. In the case where multiple tasks must be achieved in the same episode, for example stacking two different blocks at a particular location, during the first half of the task when the first block must be moved to position, factors in the latent representation describing the second block can be seen as additional factors.

In this work, we highlight the question of what are desirable properties of goal spaces and how those properties may differ with a hierarchical architecture. Learned latent variable models will have imperfections, and our aim was to study these in a controlled manner in a relatively simple environment. We experimented with two simulated robotics tasks in order to understand the effect various properties of the goal space on sample efficiency in the context of HER and a hierarchical version of HER, implemented as HAC. In these tasks, rotations of the goal space did not have an effect on the performance of either algorithm. However, an additional irrelevant factor dramatically affected the hierarchical agent while having no effect on single-level HER. This highlights the importance of the representation used for the used for the action space of the master policy. Finally, we see that noise affects HER more strongly than it affects a hierarchical model.

One approach to making HAC more robust is related to the master policy’s action space. In HAC, hindsight action memory is used to help the master policy more quickly learn to choose achievable actions. A penalty for selecting unachievable actions is then also added to ensure that the master policy does not get stuck repeatedly generating unachievable sub goals.  Vezhnevets et al. (2017) discuss a similar issue, choosing to use directions in a learned state space as the goal space with the justification that goals are valid for a large part of the latent space. We find that by increasing the dimensionality of the goal space, HAC performs significantly worse, suggesting that there are still improvements to be had by more directly encouraging or enforcing the master policy to select achievable sub goals. We are currently exploring different success functions that we believe would make HAC more robust to goal space aberrations. Other future work involves extending these experiments to additional tasks in more complex environments. We envision building off these insights to design hierarchical agents which use learned, potentially disentangled, representations of goal spaces in complex visual environments.

Since the target positions in reach tasks are in the xy co-ordinate space, the results section of the paper only showed rotations in that plane. Here in figure 4 we show that rotation in yz and xz planes show similar results, namely, learning in HAC is not compromised by goal spaces defined by rotation of ground truth goal space.