Deep neural networks have exhibited promising performance in image super-resolution (SR). Most SR models follow a hierarchical architecture that contains both the cell-level design of computational blocks and the network-level design of the positions of upsampling blocks. However, designing SR models heavily relies on human expertise and is very labor-intensive. More critically, these SR models often contain a huge number of parameters and may not meet the requirements of computation resources in real-world applications. To address the above issues, we propose a Hierarchical Neural Architecture Search (HNAS) method to automatically design promising architectures with different requirements of computation cost. To this end, we design a hierarchical SR search space and propose a hierarchical controller for architecture search. Such a hierarchical controller is able to simultaneously find promising cell-level blocks and network-level positions of upsampling layers. Moreover, to design compact architectures with promising performance, we build a joint reward by considering both the performance and computation cost to guide the search process. Extensive experiments on five benchmark datasets demonstrate the superiority of our method over existing methods. 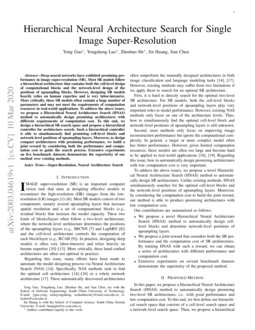 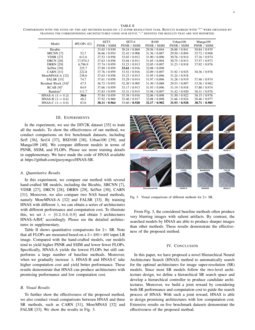 [9, 11, 34, 35, 21, 12]. Most SR models consist of two components, namely several upsampling layers that increase spatial resolution and a set of computational blocks (e.g., residual block) that increase the model capacity. These two kinds of blocks/layers often follow a two-level architecture, where the network-level architecture determines the positions of the upsampling layers (e.g., SRCNN [7] and LapSRN [24]) and the cell-level architecture controls the computation of each block/layer (e.g., RCAB [38]). In practice, designing deep models is often very labor-intensive and relies heavily on human expertise [13, 15, 3, 14]. More critically, these hand-crafted architectures are often not optimal in practice.

Regarding this issue, many efforts have been made to automate the model designing process via Neural Architecture Search (NAS) [29]. Specifically, NAS methods seek to find the optimal cell architecture [25, 29, 16] or a whole network architecture [40]. These automatically discovered architectures often outperform the manually designed architectures in both image classification and language modeling tasks [40, 29]. However, existing methods may suffer from two limitations if we apply them to search for an optimal SR architecture.

First, it is hard to directly search for the optimal two-level SR architecture. For SR models, both the cell-level blocks and network-level positions of upsampling layers play very important roles to model performance. However, existing NAS methods only focus on one of the architecture levels. Thus, how to simultaneously find the optimal cell-level block and network-level positions of upsampling layers is still unknown.

Second, most methods only focus on improving image reconstruction performance but ignore the computational complexity. In general, a larger or more complex model often has better performance. However, given limited computation resources, these models are often too large and become hard to be applied to real-world applications [39, 26]. Regarding this issue, how to automatically design promising architectures with low computation cost is very important.

To address the above issues, we propose a novel Hierarchical Neural Architecture Search (HNAS) method to automatically design SR architectures. Unlike existing methods, HNAS simultaneously searches for the optimal cell-level blocks and the network-level positions of upsampling layers. Moreover, by considering the computation cost to build the joint reward, our method is able to produce promising architectures with low computation cost.

In general, SR models often consist of two components, namely several upsampling layers that increase spatial resolution and a series of computational blocks that increase the model capacity. These two components form a two-level architecture, where the cell-level identifies the computation of each block and the network-level determines the positions of the upsampling layers. Based on the hierarchical architecture, we propose a hierarchical SR search space that contains a cell-level search space and a network-level search space.

Cell-level search space. In the cell-level search space, as shown in Fig. 2, we represent a cell as a directed acyclic graph (DAG) [29, 25], where the nodes denote the feature maps in deep networks and the edges denote some computational operations, e.g., convolution. In this paper, we define two kinds of cells: (1) the normal cell that controls the model capacity and keeps the spatial resolution of feature map unchanged, and (2) the upsampling cell that increases the spatial resolution. To design these cells, we collect the two sets of operations that have been widely used in SR models. We show the candidate operations for both cells in TABLE I.

Based on the candidate operations, the goal of HNAS is to select the optimal operation for each edge of DAG and learn the optimal connectivity among nodes (See more details in Section II-B).

Let N and M denote the number of layers before and after the upsampling block (See Figure 1 (a)). Thus, there are L=M+N+1 blocks in total. Given specific normal and upsampling cells, our goal is to find the optimal position of the upsampling block among L layers. We will show how to determine the position in Section II-B.

Based on the hierarchical search space, we seek to search for the optimal cell-level and network-level architectures. Following [40, 29]

, we use a long short-term memory (LSTM)

Cell-level controller. We utilize a cell-level controller to find the optimal computational DAG with B nodes (See example in Fig. 2). In a DAG, the input nodes −2 and node −1 denote the outputs of the second nearest and the nearest cell in front of the current block, respectively. The remaining B−2 nodes are intermediate nodes, each of which also takes two previous nodes in this cell as inputs. For each intermediate node, the controller makes two kinds of decisions: 1) which previous node should be taken as input and 2) which operation should be applied to each edge. All of these decisions can be represented as a sequence of tokens and thus can be predicted using the LSTM controller [40]. After repeating B−2 times, all of the B−2 nodes are concatenated together to obtain the final output of the cell, i.e., the output node.

To train HNAS, we first propose the joint reward to guide the architecture search process. Then, we depict the detailed training and inference methods of HNAS.

where λ denotes the weight of model performance in the joint reward. In general, the higher PSNR or lower cost the controller produces, the better the model will be. From Eqn. (1), a larger λ would result in the architectures with better performance but higher cost (See results in Table II). In practice, we can adjust λ according to the requirements of real-world applications.

Training method for HNAS. With the joint reward, following [40, 29], we apply the policy gradient [33] to train the controller. We show the training method in Algorithm 1. To accelerate the training process, we adopt the parameter sharing technique [29], i.e., we construct a large computational graph, where each subgraph represents a neural network architecture, hence forcing all architectures to share the parameters.

Let θ and w be the parameters of the controller model and the shared parameters. The goal of HNAS is to learn an optimal policy π(⋅) and produce candidate architectures by conduct sampling α∼π(α). To encourage exploration, we introduce an entropy regularization term into the objective to prevent the controllers from premature convergence [41].

Inferring Architectures. Based on the learned policy π(⋅), we conduct sampling to obtain promising architectures. Specifically, we first sample several candidate architectures and then select the architecture with the highest validation performance. Finally, we build SR models using the searched architectures (including both the cell-level blocks and network-level position of upsampling blocks) and train them from scratch.

In the experiment, we use the DIV2K dataset [32] to train all the models. To show the effectiveness of out method, we conduct comparisons on five benchmark datasets, including Set5 [2], Set14 [37], BSD100 [28], Urban100 [20], and Manga109 [10]. We compare different models in terms of PSNR, SSIM, and FLOPs. Please see more training details in supplementary. We have made the code of HNAS available at https://github.com/guoyongcs/HNAS-SR.

In this experiment, we compare our method with several hand-crafted SR models, including the Bicubic, SRCNN [7], VDSR [22], DRCN [23], DRRN [31], SelNet [4], CARN [1]. Moreover, we also compare two NAS based methods, namely MoreMNAS-A [6] and FALSR [5]. By training HNAS with different λ, we can obtain a series of architectures with different performance and computation cost. To illustrate this, we set λ={0.2,0.6,0.9} and obtain 3 architectures HNAS-A/B/C accordingly. Please see the detailed architectures in supplementary.

Table II shows quantitative comparisons for 2× SR. Note that all FLOPs are measured based on a 3×480×480 input LR image. Compared with the hand-crafted models, our models tend to yield higher PSNR and SSIM and lower fewer FLOPs. Specifically, HNAS-A yields the lowest FLOPs but still outperforms a large number of baseline methods. Moreover, when we gradually increase λ, HNAS-B and HNAS-C take higher computation cost and yield better performance. These results demonstrate that HNAS can produce architectures with promising performance and low computation cost.

To further show the effectiveness of the proposed method, we also conduct visual comparisons between HNAS and three SR methods, such as CARN [1], MoreMNAS [6] and FALSR [5]. We show the results in Fig. 3.

From Fig. 3, the considered baseline methods often produce very blurring images with salient artifacts. By contrast, the searched models by HNAS are able to produce sharper images than other methods. These results demonstrate the effectiveness of the proposed method.

In this paper, we have proposed a novel Hierarchical Neural Architecture Search (HNAS) method to automatically search for the optimal architectures for image super-resolution (SR) models. Since most SR models follow the two-level architecture design, we define a hierarchical SR search space and develop a hierarchical controller to produce candidate architectures. Moreover, we build a joint reward by considering both SR performance and computation cost to guide the search process of HNAS. With such a joint reward, HNAS is able to design promising architectures with low computation cost. Extensive results on five benchmark datasets demonstrate the effectiveness of the proposed method.