Protein function prediction may be framed as predicting subgraphs (with certain closure properties) of a directed acyclic graph describing the hierarchy of protein functions. Graph neural networks (GNNs), with their built-in inductive bias for relational data, are hence naturally suited for this task. However, in contrast with most GNN applications, the graph is not related to the input, but to the label space. Accordingly, we propose Tail-GNNs, neural networks which naturally compose with the output space of any neural network for multi-task prediction, to provide relationally-reinforced labels. For protein function prediction, we combine a Tail-GNN with a dilated convolutional network which learns representations of the protein sequence, making significant improvement in F_1 score and demonstrating the ability of Tail-GNNs to learn useful representations of labels and exploit them in real-world problem solving. 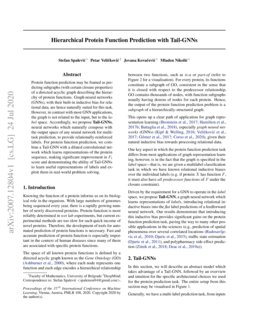 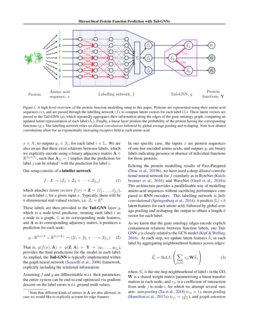 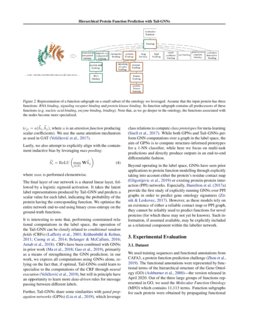 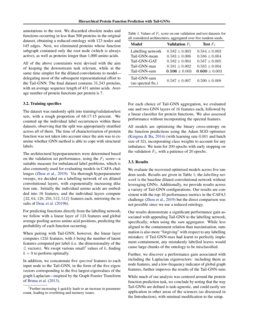 The space of all known protein functions is defined by a directed acyclic graph known as the Gene Ontology (GO) (Ashburner et al., 2000), where each node represents one function and each edge encodes a hierarchical relationship between two functions, such as is-a or part-of (refer to Figure 2 for a visualisation). For every protein, its functions constitute a subgraph of GO, consistent in the sense that it is closed with respect to the predecessor relationship. GO contains thousands of nodes, with function subgraphs usually having dozens of nodes for each protein. Hence, the output of the protein function prediction problem is a subgraph of a hierarchically-structured graph.

One key aspect in which the protein function prediction task differs from most applications of graph representation learning, however, is in the fact that the graph is specified in the label space—that is, we are given a multilabel classification task in which we have known relational inductive biases over the individual labels (e.g. if protein X has function F, it must also have all predecessor functions of F under the closure constraint).

Driven by the requirement for a GNN to operate in the label space, we propose Tail-GNN, a graph neural network which learns representations of labels, introducing relational inductive biases into the flat label predictions of a feedforward neural network. Our results demonstrate that introducing this inductive bias provides significant gains on the protein function prediction task, paving the way to many other possible applications in the sciences (e.g., prediction of spatial phenomena over several correlated locations (Radosavljevic et al., 2010; Djuric et al., 2015)

In this section, we will describe an abstract model which takes advantage of a Tail-GNN, followed by an overview and intuition for the specific architectural choices we used for the protein prediction task. The entire setup from this section may be visualised in Figure 1.

Generally, we have a multi-label prediction task, from inputs x∈X, to outputs yi∈Yi, for each label i∈L. We are also aware that there exist relations between labels, which we explicitly encode using a binary adjacency matrix A∈R|L|×|L|, such that Aij=1 implies that the prediction for label j can be related111Note that different kinds of entries in A are also allowed, in case we would like to explicitly account for edge features. with the prediction for label i.

Our setup consists of a labeller network

which attaches latent vectors f(x)=Z={→z1,…,→z|L|}, to each label i, for a given input x. Typically, these will be k-dimensional real-valued vectors, i.e. Zi=Rk.

That is, g(f(x),A)=g(Z,A)=Y=(y1,…,y|L|), provides the final predictions for the model in each label. As implied, the Tail-GNN is typically implemented within the graph neural network (Scarselli et al., 2008) framework, explicitly including the relational information.

Assuming f and g are differentiable w.r.t. their parameters, the entire system can be end-to-end optimised via gradient descent on the label errors w.r.t. ground-truth values.

In our specific case, the inputs x

are protein sequences of one-hot encoded amino acids, and outputs

yi are binary labels indicating presence or absence of individual functions for those proteins.

Echoing the protein modelling results of Fast-Parapred (Deac et al., 2019b), we have used a deep dilatedconvolutional neural network for f (similarly as in ByteNet (Kalchbrenner et al., 2016) and WaveNet (Oord et al., 2016)). This architecture provides a parallelisable way of modelling amino-acid sequences without sacrificing performance compared to RNN encoders. This labelling network is fully convolutional (Springenberg et al., 2014): it predicts |L|×k latent features for each amino acid, followed by global average pooling and reshaping the output to obtain a length-k vector for each label.

As we know that the gene ontology edges encode explicit containment relations between function labels, our Tail-GNN g is closely related to the GCN model (Kipf and Welling, 2016). At each step, we update latent features →hi in each label by aggregating neighbourhood features across edges:

where Ni is the one-hop neighbourhood of label i in the GO, W

is a shared weight matrix parametrising a linear transformation in each node, and

cji is a coefficient of interaction from node j to node i, for which we attempt several variants: sum-pooling (Xu et al., 2018) (cji=1), mean-pooling (Hamilton et al., 2017a) (cji=1|Ni|), and graph attention (cji=a(→hi,→hj), where a is an attention function producing scalar coefficients). We use the same attention mechanism as used in GAT (Veličković et al., 2017).

Lastly, we also attempt to explicitly align with the containment inductive bias by leveraging max-pooling:

where max is performed elementwise.

The final layer of our network is a shared linear layer, followed by a logistic sigmoid activation. It takes the latent label representations produced by Tail-GNN and predicts a scalar value for each label, indicating the probability of the protein having the corresponding function. We optimise the entire network end-to-end using binary cross-entropy on the ground-truth functions.

It is interesting to note that, performing constrained relational computations in the label space, the operation of the Tail-GNN can be closely related to conditional random fields (CRFs) (Lafferty et al., 2001; Krähenbühl and Koltun, 2011; Cuong et al., 2014; Belanger and McCallum, 2016; Arnab et al., 2018). CRFs have been combined with GNNs in prior work (Ma et al., 2018; Gao et al., 2019), primarily as a means of strengthening the GNN prediction; in our work, we express all computations using GNNs alone, relying on the fact that, if optimal, Tail-GNNs could learn to specialise to the computations of the CRF through neural execution (Veličković et al., 2019), but will in principle have an opportunity to learn more data-driven rules for message passing between different labels.

. While both GPNs and Tail-GNNs perform GNN computations over a graph in the label space, the aim of GPNs is to compute structure-informed prototypes for a 1-NN classifier, while here we focus on multi-task predictions and directly produce outputs in an end-to-end differentiable fashion.

Beyond operating in the label space, GNNs have seen prior applications to protein function modelling through explicitly taking into account either the protein’s residue contact map (Gligorijevic et al., 2019) or existing protein-protein interaction (PPI) networks. Especially, Hamilton et al. (2017a) provide the first study of explicitly running GNNs over PPI graphs in order to predict gene ontology signatures (Zitnik and Leskovec, 2017). However, as these models rely on an existence of either a reliable contact map or PPI graph, they cannot be reliably used to predict functions for novel proteins (for which these may not yet be known). Such information, if assumed available, may be explicitly included as a relational component within the labeller network.

We used training sequences and functional annotations from CAFA3, a protein function prediction challenge (Zhou et al., 2019). The functional annotations were represented by functional terms of the hierarchical structure of the Gene Ontology (GO) (Ashburner et al., 2000)—the version released in April 2020. Out of the three large groups of functions represented in GO, we used the Molecular Function Ontology (MFO) which contains 11,113 terms. Function subgraphs for each protein were obtained by propagating functional annotations to the root. We discarded obsolete nodes and functions occurring in less than 500 proteins in the original dataset, obtaining a reduced ontology with 123 nodes and 145 edges. Next, we eliminated proteins whose function subgraph contained only the root node (which is always active), as well as proteins longer than 1,000 amino acids.

All of the above constraints were devised with the aim of keeping the downstream task relevant, while at the same time simpler for the dilated convolutions to model—delegating most of the subsequent representational effort to the Tail-GNN. The final dataset contains 31,243 proteins, with an average sequence length of 431 amino acids. Average number of protein functions per protein is 7.

The dataset was randomly split into training/validation/test sets, with a rough proportion of 68:17:15 percent. We counted up the individual label occurrences within these datasets, observing that the split was appropriately stratified across all of them. The time of characterization of protein function was not taken into account since the aim was to examine whether GNN method is able to cope with structural labels.

The architectural hyperparameters were determined based on the validation set performance, using the

F1 score—a suitable measure for imbalanced label problems, which is also commonly used for evaluating models in CAFA challenges (Zhou et al., 2019). Via thorough hyperparameter sweeps, we decided on a labelling network of six dilated convolutional layers, with exponentially increasing dilation rate. Initially the individual amino acids are embedded into 16 features, and the individual layers compute {32,64,128,256,512,512} features each, mirroring the results of Deac et al. (2019b).

For predicting functions directly from the labelling network, we follow with a linear layer of 123 features and global average pooling across amino acid positions, predicting the probability of each function occurring.

When pairing with Tail-GNN, however, the linear layer computes 123k features, with k being the number of latent features computed per label (i.e. the dimensionality of the →zi vectors). We swept various small222Further increasing k quickly leads to an increase in parameter count, leading to overfitting and memory issues. values of k, finding k=9 to perform optimally.

In addition, we concatenate five spectral

features to each input node to the Tail-GNN, in the form of the five eigenvectors corresponding to the five largest eigenvalues of the graph Laplacian—inspired by the Graph Fourier Transform of

For each choice of Tail-GNN aggregation, we evaluated one and two GNN layers of 16 features each, followed by a linear classifier for protein functions. We also assessed performance without incorporating the spectral features.

All models are optimising the binary cross-entropy on the function predictions using the Adam SGD optimiser (Kingma and Ba, 2014) (with learning rate 0.001 and batch size of 32), incorporating class weights to account for any imbalance. We train for 200epochs with early stopping on the validation F1, with a patience of 20 epochs.

We evaluate the recovered optimised models across five random seeds. Results are given in Table 1; the labelling network is the baseline dilated convolutional network without leveraging GNNs. Additionally, we provide results across a variety of Tail-GNN configurations. Our results are consistent with the top-10 performance metrics in the CAFA3 challenge (Zhou et al., 2019) but the direct comparison was not possible since we use a reduced ontology.

Our results demonstrate a significant performance gain associated with appending Tail-GNN to the labelling network, specifically, when using the sum aggregator. While less aligned to the containment relation than maximisation, summation is also more “forgiving” with respect to any labelling mistakes: if Tail-GNN-max had learnt to perfectly implement containment, any mistakenly labelled leaves would cause large chunks of the ontology to be misclassified.

Further, we discover a performance gain associated with including the Laplacian eigenvectors: including them as node features, and a low-frequency indicator of global graph features, further improves the results of the Tail-GNN-sum.

While much of our analysis was centered around the protein function prediction task, we conclude by noting that the way Tail-GNNs are defined is task-agnostic, and could easily see application in other areas of the sciences (as discussed in the Introduction), with minimal modification to the setup.