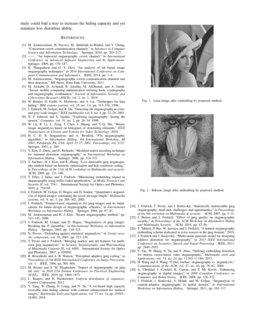 Images, videos, text files, pdf files, etc. are the most common medium of steganography. However, images are the most popular medium for steganography [5]. Because image steganography is simpler and provides comparatively higher hiding/embedding capacity [6]. In image steganography, the Least Significant Bit (LSB) modification method is considered as a pioneer work [10]. Note that, LSB modification and LSB matching have two different application areas [17]. LSB modification is popular for the uncompressed domain, while LSB matching is popular for the compressed domain. It is worth to mention here that the detection processes of these techniques are also different.

Several innovative steganographic algorithms are developed within the last few decades [20]. Such as, matrix embedding or F5 algorithm [26], modified matrix embedding[18], BCH coding[25], and trellis-coded [9]. While these methods have claimed to have better resistance against statistical attacks or statistical steganalysis, many researchers have developed methods to break them.

To minimize the distortion of the stego image, Kim et al. have developed the Modified Matrix Embedding (MME) algorithm [18]. In their work, the authors considered JPEG images as their secret medium. The MME algorithm helps to identify which LSB bit to modify in order to hide a secret message, this part is the same as the F5 algorithm [26]. In general, modifying LSB of an image using the MME algorithm produces the least amount of distortion [18]. Yet extensive analysis could reveal the existence of a secret message because of LSB modification.

Pevny and Fridrich [21] described how rounding operation contributes to image distortion. The authors have explained how to reduce rounding error and ultimately distortion in the compressed JPEG image. Kim et al. [18] used the idea of reducing the rounding error in matrix embedding or F5 algorithm. The MME algorithm is well-known for its less distortion compared to the F5 Algorithm.

Although, the MME algorithm outperforms the F5 algorithm by minimizing the rounding error. However, because of the position of candidate coefficient is defined by the matrix embedding technique without any flexibility. So, the error minimization is yet to be the least. The proposed technique allows finding the best candidate that will allow minimizing the rounding error and overcomes the drawback of the MME algorithm.

The rest of this paper is organized as follows: Section II presents related works. Section III describes the proposed method in detail, including encoding and decoding techniques. The experimental results and comparisons of obtained results are presented in V section. Finally, section VI concludes the study and provides future research directions.

During the JPEG image compression, an uncompressed image goes through JPEG encoder and decoder while transformation happens using the DCT [5]. In the encoder, each channel of the image is divided into 8×8 blocks, which is also known as the JPEG block. Let, f(i,j), where i,j=0,1,⋯,N−1 of a N×N image channel block and F(i,j), where i,j=0,1,⋯,N−1 of a DCT transformation of the N×N image channel block [4].

and after rounding the coefficients becomes integer [24] as described in Eq. 2.

clearly there is a difference between F′(i,j) and F′′(i,j) because of the rounding operation, which can be expressed as,

The F5 steganographic method was proposed by Westfeld [26]. This method is considered as one of the first methods of data hiding that provides less modification during the data hiding process. The F5 algorithm is based on the matrix encoding technique, where among u non-zero AC coefficients are considered to hide v secret message bits by modifying only one coefficient. For example, u=7 non-zero coefficients will be considered to hide v=3 message bits. Since secret bits are either 0 or 1, thus u and v can be computed as,

It is important to note that the F5 algorithm is not breakable using the first-order statistics or histogram-based steganalysis [26]. Histogram-based steganalysis compares the histogram of original image (i.e., unaltered image) and stego image (i.e., modified image) [20]. Hence, the F5 method is considered as one of the best steganographic methods [5]. However, the F5 method has its limits as well; for example, the F5 method does not provide freedom to select a position of the candidate coefficient. In other words, the position of the candidate coefficient is not changeable.

Also, the F5 algorithm increases the number of zeros coefficients in the stego image and does not have the ability to minimize the distortion in the stego image [5]. However, it important to note that the F5 algorithm is much secure than most algorithms when it hides a small amount of secret message in a JPEG image, and it is secure against the Chi-Square (χ2) analysis [23, 5].

Since the coefficient matrix is one-dimensional, thus in order to multiply that with the H matrix, it is important to transpose C. Note that only non-zero C would be considered for this process. See the following Eq. 5 for more details:

From the stego image all non-zero coeffients would be extracted as C′=[C′1,C′2,⋯,C′n], and extracted coeffients will be multiplied with H matrix to get the secret message bit bi. See the following Eq. 7 for more details:

and the position of the coefficient is

To decode the message

Again, it is important to note that MME can reduce the distortion by modifying the candidate coefficient in a way that provides the least distortion for that particular coefficient.

The proposed method is very simple, it uses the idea of MME as explained in section II-C. However, it allows finding the candidate which provides the least amount of distortion. In other words, it has the ability to overcome the limitation of the MME algorithm. Therefore, mathematically and theoretical this method can outperform both F5 and MME algorithms.

In step three, after finding the best candidate in the block the proposed algorithm modifies the coefficient following the rule explained in Eq. 8.

However, if this block needs to hide 0 as a secret message bit, then the sum value needs to be modified to an even number (i.e., 2 or 4). This can be done by modifying any of the coefficients. Either add 1 or subtract one would do the trick. However, because this method tries to reduce the distortion as much as possible, therefore it looks for the coefficient and ±1 to it.

The decoding scheme working as follows:

So, the proposed method will find the second to last coefficient because of it is producing the least amount of distortion among all the coefficients, and modify it to hide the secret message bit.

Iv Compare the distortion between F5/MME and MDE

Both F5 and MME use matrix embedding, which is explained in sections II-B and II-C. However, MME uses rounding error information to minimize the distortion using the Eq. 8

. In general, there are 50% chances that the MME method reduced the distortion than the F5 algorithm. Perhaps, the F5 algorithm modified a coefficient in a way that produces the same distortion as MME. Also, this can be proved by the logic of uniform distribution

Therefore, based on the above discussion it is clear that MDE method outperform both F5 and MME methods, and produces less distortion than those methods. In sum, MDE produces less error so probability of detecting the existence secret message in MDE is less than F5. The following section would show some experimental comparisons between MDE and F5 method as it it the base method.

An image database was used to test both the F5 method and the proposed MDE method. In the database, there are over 1,173 images. A Support Vector Machine was trained using the features of original images from the database. Then tested by modifying those images using F5 and MDE methods. Results of F5 and MDE were checked separately to compare the error probability. If SVM produced more error probability for one method than the other that showed which method is stronger or have better strength against steganalysis

The error probability can be defined using following equation:

The hiding rate or embedding rate of a image can be computed as [5, 27],

Both MDE and F5 methods were tested with Support Vector Machine to detect steganalysis probability, the following comparison are prepared after getting the steganalysis detection result. During the performance testing, the error probability and embedding rate were considered with both QF = 50, and QF = 75. With both QF (i.e., 50 and 75), the proposed method (i.e., MDE) achieved better performance than the F5 method. A distortion function was D(.) was defined by the guidelines provided by Filler and Fridrich [9] as below:

A steganography method will have better resistance if it produces less mean distortion [14, 31]. During the performance testing, the mean distortion and embedding rate was considered with QF = 50, and QF = 75. With both QF, the proposed MDE method has achieved better performance than F5 method.

Visual analysis is another important steganalysis technique that helps to understand whether an image was artificially altered [29, 8]. As the proposed method produces less distortion than the F5 method. Therefore, the output image or stego image produced by proposed MDE method does not show any visual issues [5], and it will not reveal the existence of secret message in visual inspection (see Fig. 1 and Fig 2).

The results of this study suggest that the proposed MDE method has better resistance ability in terms of steganalysis than the F5 method. In the case of steganography, attacks are more important than capacity, while this method has better hiding capacity also [5]. The main advantage of this proposed method is the freedom of modifying any coefficients. Resulting in a better quality of stego image and higher resistance against attacks.